I remember the first support group meeting I went to many years ago. My son was four and I was like a deer in the headlights. I had zero idea of what I was doing in regards to autism. Hearing the parents of older kids talking about autism and high school was overwhelming, so overwhelming that I almost walked out. He had just received his diagnosis and I was struggling to just get through a day at home. The idea of him still needing help in high school, like the parents were discussing, was scary.

Fast-forward 11 years and he started 10th grade today. The school year officially started three days ago but we opted for an alternative program to allow him to progress more quickly. Grades are not an issue with him, and he likes to put his head down to knock out his work. This program will accommodate his ability to speed through the classes at his own faster pace and graduate early. We couldn’t be happier with the choice and we’re thrilled his high school offers this program. Same diploma, same classes and course work everyone takes, just at a faster rate. We’re so excited!

Still, prepping for the first day of school can be daunting. So many things to do! Shopping, school forms, phonecalls, meetings, the list goes on. With some advance planning though — including more lists — you can ace it, making dealing with autism and high school a lot less difficult. 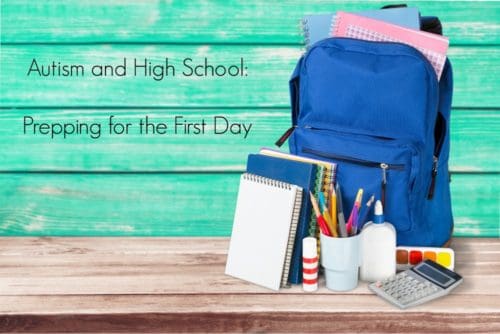 Here are my top tips on prepping for the first day of school without taking away any of the fun!

Autism and high school can mean challenges and deep breaths, but take it one day at a time and smile.