You are here: Home / Lifestyle / Being a Football Mom: How to Get It All Done and Still Enjoy Game Time
Tweet
Share
Pin5
5 Shares

This year, I signed up to be a Team Mom on my son’s football team. The husband didn’t want me to, but I gave it a few days and I saw no other answers to the group text to all parents. They need a Team Mom, right? Little did I know about being a football mom! My son’s growing so fast, the amount of times I can be involved in what he’s doing is shrinking. So I did it. I volunteered, and life hasn’t been the same since. (On a happy note, I’m doing it in conjunction with the coach’s wife, so she knows the game and I know how to, well, coordinate snacks and hand out water. And encourage.)

Being a football mom is a new world, one I’m still not used to. Little Dude just started playing football Spring of 2015.  He began during the summer, when practices were daily Monday through Friday. I’m not a football fan. I grew up with it being on in the background, as my dad was a big fan, but I didn’t absorb much. I know the basics but I’m learning all the finer points now, way late in the game. (See what I did there?) It’s not as easy as I thought it would be. 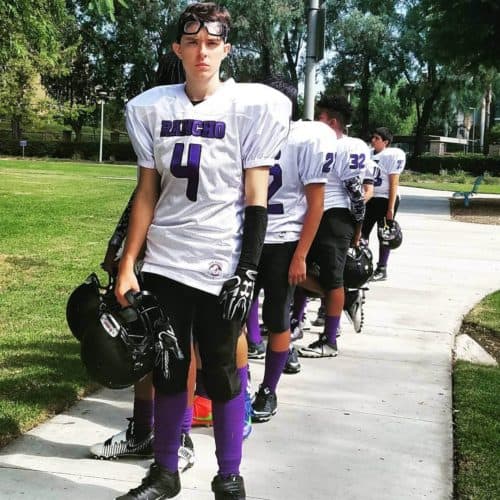 Life revolves around football now. Practice is at least three days a week so those days mean we’re rescheduling things to make sure one of us is available to get him to the field and one is able to pick him up and watch for an hour or so. Because we still have to eat and fast food nightly is both costly and not good for us. We plan our weekends around his games and there’s always something that he needs on our shopping list.

So how do you stay on top of it all and still enjoy game time? Here are my tips to get it all done! (If you’re interested in one of the items I swear by, I’ve included links to a couple on Amazon. They are affiliate links, fyi.)

Organization Tips for Being a Football Mom

Designate a gear zone: keep everything there so you aren’t losing it in the depths of a teenager’s bedroom. Dirty, clean, whatever, make sure it’s there at the end of each day. You can see what needs to be washed and what is broken and/or missing, like the mouth guards that seem to continually need to be replaced or the Under Armour shirt he’s worn more than once and would wear again if you didn’t smell it.

Designate a gear-FREE zone: this could, for example, be your kitchen table. I’ve looked up, during dinner prep, and seen cleats sitting on mine. (I guess it could be worse, they are required to wear a cup.) 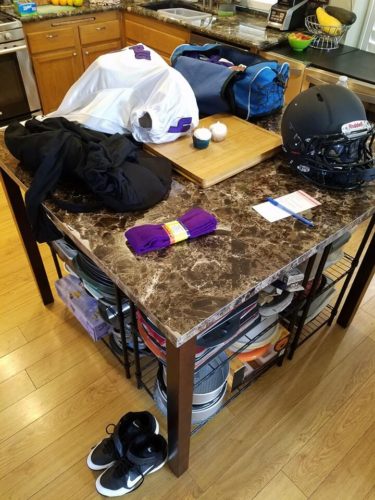 Keep a stocked “going to the game” bag: Mine is a really cool Finding Dory bag. (Where did I get that, I wonder?) It’s waterproof and has a flat bottom so it won’t fall over. Inside I keep everything that has to go to the game, including the team roster and Team Mom paperwork that previously would get left in my car…and sometimes I park far away. I need exercise, but I also need to see the game. I also threw in a hair tie for those hot/messy days, a spare water bottle and a couple of granola bars.

Get comfy: we have two beach chairs that sit lower than a regular chair, so we can sit close to the sidelines without blocking anyone’s views. (I don’t sit down at most games due to Team Mom duties, but when I do, these chairs are fantastic.) These umbrellas are also a lifesaver on a hot day, and they can sit low or at whatever angle you want, to stay out of the way of other spectators and still keep you in the shade.   Yhey clip onto pretty much any type of chair, bend and move and have an odd-shaped top so you really can stay entirely in the shade.

Keep cool: these squirt bottle fans are worth their weight in gold. I hunted our purple model down when we were in Indianapolis for the 500 at the Brickyard last month. It’s gotten a lot of use. The boys like it when I spray them at half-time and it’s handy when someone’s not feeling well, too. Keep it in your game bag so you never forget it, and when you’re there at the game, pop it in your cooler to keep the water cold.

Speaking of coolers: soft-sided smaller coolers aren’t heavy and can make you popular when someone needs a sports drink or water in a pinch. Stick in a few reusable ice blocks and they’re easy to carry. Cold washcloths stuck in the side are also great for a quick half-time perk me up around a kid’s neck…or your own.

Download your favorite calendar app: Sync it to all your devices and give your spouse and other kids, if necessary, access to it. Put all the game times and locations into the app as soon as you get them. I use Google Calendar, as it’s easy, free and was already installed on my phone; it also syncs with my work calendar so I get it all in one place, but there are so many to choose from. Most are free, but the upgrade options that cost $2-$3 can take it a notch higher in organization and visual appeal. (I color code things so I can see family, work and business at a glance.)

Create a group text: I’m frequently sending out texts to the parents, so this makes it easy. They can mute the conversation once they’re done, and I can reply just to those I need when it doesn’t need to be a group text. There are even apps just for group texts.

Set up a menu plan: A little time on a Sunday spent planning your menus will make it easier when it comes to dinner time during the week. I’m still working on this one, but when I do it, we eat earlier after practice (which is over at 8pm, so ‘early’ is relative) and the meals are healthier and less hodge-podge. I also can keep our grocery costs lower. I shop usually on Mondays at lunch time and the husband does Costco most weekends so if something doesn’t get on a list, it may wait until the following week. Getting into a shopping routine helps others know when the deadline to get it on the list is, too, helpful when your teen decides he needs something urgent, like more fiber paste for his hair.

Rotate responsibilities: I’m thankful that the husband is an involved dad and takes our son to practice most days, but I do try to jump in when I can. (Dinner duties are more me though during the week, so changing it too much means dinner may get postponed. Pick where you want to make your compromises as far as meals and driving duties.) I also will call in an older sibling if need be, so we can still be available for another event should one arise on the same night as practice. 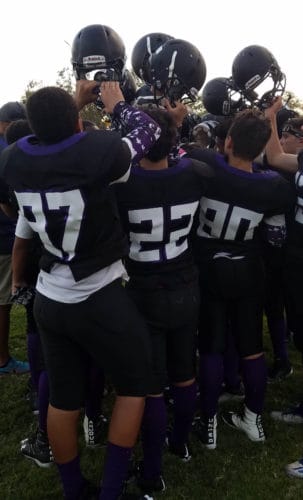 Above all, have fun. I try to not let the work details of it all impede my enjoyment of watching my son play. He’s having too good of a time and he’s the focus of it all. Be flexible, go when you can and remember that they grow too fast. All too soon, they won’t want us around as much! Being a football mom will keep you busy but enjoy it while it lasts!