You are here: Home / Entertainment / That Time I Got to Meet Chris Hemsworth….
Tweet
Share10
Pin
10 Shares

Anyone that knows me knows about my extreme fangirl-ism of Chris Hemsworth.  He’ll forever be Thor to me, but I watch him in every role he plays. I’ve interviewed him several times for various Marvel movies, passed by him in hallways at press events and taken more pictures of him than I can count, but I’ve never gotten to meet Chris Hemsworth up close and personal…..until a couple of months ago.

I was invited to the 12 Strong movie press junket back in January, as part of a group of women writers with military ties. Most were military wives, and I covered the event in lieu of a dear friend, another military wife, who was unable to attend. I’m ex-Army myself, and was also married to a soldier many years ago, so I have mad respect for those ladies and the military life. 12 Strong is the story of a group of green berets who were instrumental in their success in fighting the Taliban in a most unusual way: on horseback.

Chris Hemsworth plays Captain “Mitch Nelson” in the movie, the leader of the team and his wife, Elsa, plays his wife in the movie. The movie has you on the edge of your seat and Chris does a fantastic job in this very different role for him. And he curses…which is not a bad thing. Wow.

The invite was a real dream come true. I have no shame about admitting how badly I’ve wanted to meet him. I interview celebrities fairly regularly so I learned years ago to put the fangirl on hold and do the work. Professionalism above all. I can fire off questions without fear but I’d be lying if I said I had no worries of stammering when talking to Chris. In fact, I may have had this insane worry that I’d see him walk into the room, hold my breath until it was my turn to ask a question, then pass out, face-first, on the table. Or that I’d drool. Or that I’d drool as I’m laying face-first on the table.

It wasn’t clear until the morning of the event how much time we would get with him, and under what circumstances. We had high hopes for an intimate round table and were so excited to hear that was going to be a reality! There were only 10 of us, and when were escorted into the room, the informal chat with my new friends changed tone. Giggles got a little quieter and voices got a little higher pitched. We all tried to mask our nervousness but seriously, we were all about to meet Chris Hemsworth, to talk with him about the movie and get a photo with him. It was tough to not go from calm demeanor to OMG OMG OMG.

We held it together though. There was no drool, no fainting and no strange nervous laughter. It was instant professionalism as we got to work, yet there was an undercurrent of fun because Chris’s personality is so friendly.

A lot of good conversation. A lot of smiles. I asked a question about the movie and while I haven’t listened to my audio clip of it, I am pretty sure my voice didn’t waiver one bit. Here’s me talking to him.

And here’s him talking to me. 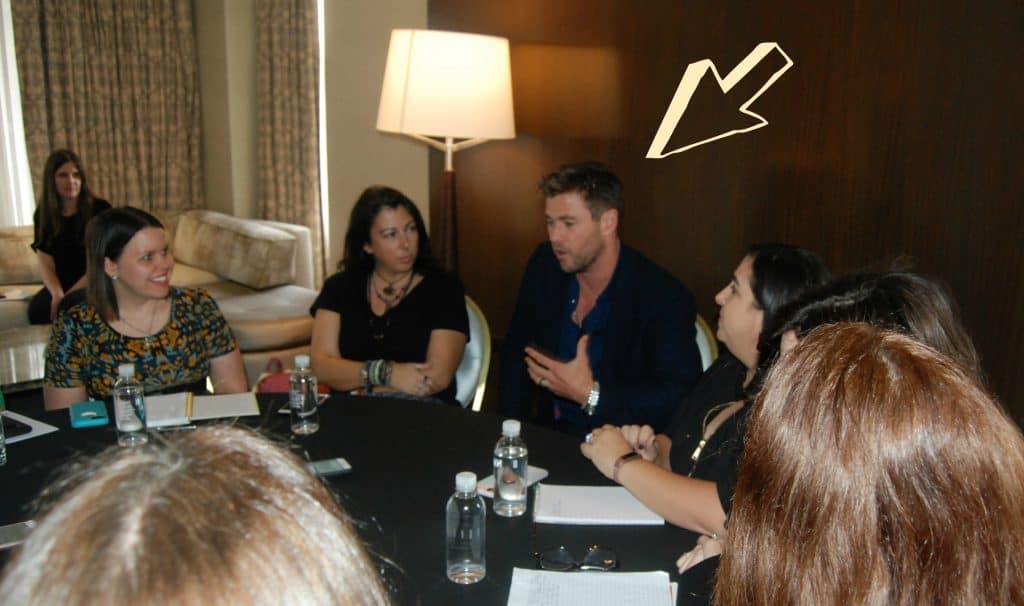 Look, my eyes aren’t popping out of my head and the OMG CHRIS HEMSWORTH IS TALKING TO ME isn’t written all over my face. 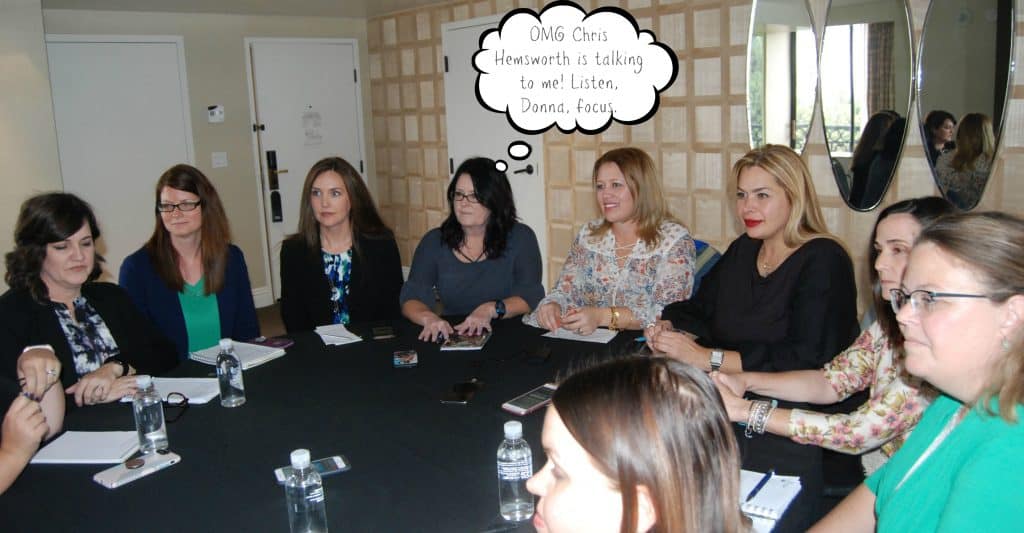 Then we got to take individual photos with him. I was halfway through the group, and I handed him my phone for a selfie. “I’ll take it, I have longer arms.” Oh my, yes, and much stronger arms. I turn over the phone to show him the case, a scene from Thor: Dark World, and he says “You just put that on there for me today, right? If I take it off, I’ll find Captain America underneath?” No, I promise, that’s been on there a long time. Only you. 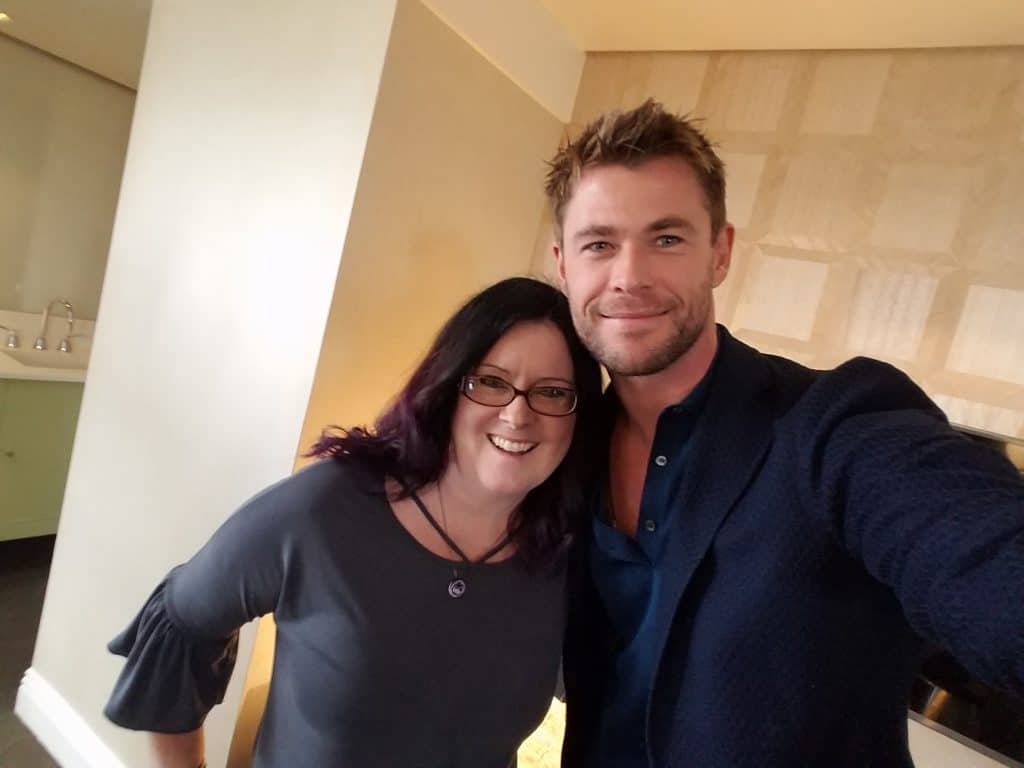 Then someone took our photo with my Nikon. I love that he was smiling, as we were wrapping up our talk about his phone case. I’d had my arm around him in the selfie, then when I took my phone back, I grabbed it with my right arm. ROOKIE MISTAKE, Donna…to put my arm back around him then would have been awkward. Still, I have my memories of how strong his back was. 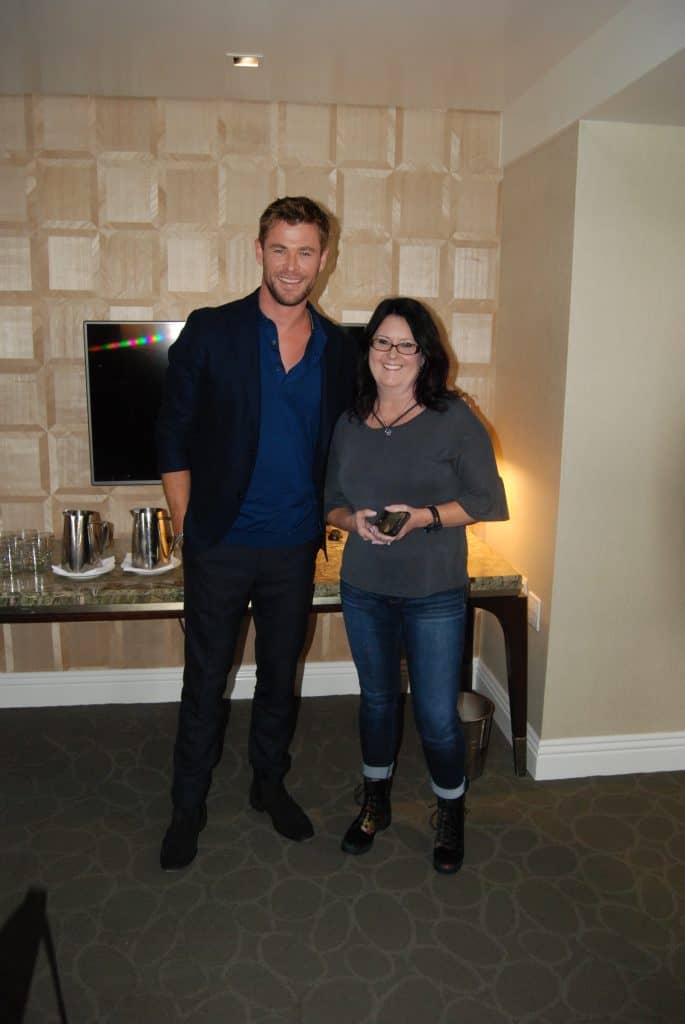 I did it. I asked him a question, I listened to his very interesting response, took a selfie with him, posed for other photos and even chatted randomly after. I keep telling the husband…and anyone else who will listen…that Thor knows where I live. After all, he asked…the fact that it was generic “Where do you live? Do you live here in LA?” doesn’t matter. Oh the stories from this day will live in my memory. And the selfie he took on my phone will remain my profile photo forever and ever.

It’s been almost 18 months now since this happened, and I still get asked: how did you get to meet Chris Hemsworth? It makes me smile every single time.

Chris Hemsworth is as amazing as I knew he would be. Kind, thoughtful, funny, genuine, his respect for the military came through loud and clear. He was as charismatic as I expected and when he smiled, there was a collective pause. Well deserved, yes, well deserved.