You are here: Home / Lifestyle / What NOT to Say to People Dealing with Secondary Infertility
Tweet
Share23
Pin1
24 Shares

I heard this a few times in life now and each time it was devastating. The first time, I was 18 weeks along, young, newly married and had no support system. I was living across the country while in the military and the medical system at the time was not the best. Long, stressful, teary waits in emergency rooms followed by waiting and finally surgery, it was a painful experience.

I got pregnant again not long after and had a little girl at 35.5 weeks, followed by a baby boy at 38 weeks just 14 months later. Fast-forward five years. I’d gotten divorced, remarried, and we decided to have a baby right away so the gap between the kids was as little as possible. It’s just that easy, you know? Plan to get pregnant, get pregnant, and poof, nine months (or 9.5 months, if the baby is stubborn) and you have a baby.

Life should always be so easy. But it wasn’t. It never occurred to me that we’d experience more difficulty when we decided to have one more baby just a couple of years later. I’d gotten pregnant quickly for the three kids and while two out of the three pregnancies weren’t what we’d call easy, my experiences were overall positive.

We did end up getting pregnant quickly, but lost the first baby at a little over eight weeks. It was tough, and I ended up having to have another minor surgery. Heartbroken, we tried to get back to our normal life, assuming we’d try again. The doctor told us, instead, to wait a few months. We did, assured it was just a coincidence and there wasn’t a real problem.

Except we lost the next baby, too, at exactly 14 weeks. It was a pretty graphic experience that resulted in a late-night ER visit. I will never forget that evening, for a lot of reasons. The hospital staff was very rude, laughing at how an ambulance had grabbed me as they saw me get out of our van and brought me in. When a nurse left me sitting in a chair, in pain and crying, while she told jokes to another staffer, the husband had to speak up to tell her that we’d like to get into the room so I could lay down. It went further downhill from there and the nurse paid me back by leaving something out that I should have never seen. (She was asked to leave, but it was too late by then.) The only good thing that evening was that the doctor on call was a high-level fertility specialist who agreed to take me on as a patient. Typical hospital rules were three consecutive losses but he felt that my history fit the requirements without having to wait for another possible loss.

While having him on our team was good news, so much wasn’t. I’d been far enough along to feel the baby and had started showing a little. People knew I was pregnant so I had to explain. We were so lucky that we had friends willing to help us out by taking the kids back and forth to school, dance lessons and everything else, in lieu of family support. That kept life pretty normal for them, while I had to admit to needing help and ended up on anti-depressants for a few months while my body healed. It was a dark time in some ways. I had three beautiful, healthy children and I loved spending time with them, but losing a baby at any stage isn’t just like having a medical procedure. It’s the loss of a child. The loss of those plans you had. The loss of the dreams. The loss of feeling that baby move.

It was hard to leave the house. I hated seeing other pregnant people. I didn’t want to see babies either. I was intensely resentful that it wasn’t me. The rational me knew how fortunate I was to have three babies, but the emotional part of me wanted my baby back. I wanted that fourth baby. I learned later that this was very normal and a lot of women going through loss, one or many, hide out at home because they might run into pregnant women. They don’t want to hear crying babies. They get angry when someone complains about being pregnant or gets pregnant on accident and doesn’t want it. I get it, and I admit to feeling all of it. I wish I’d known then how normal it was to feel that way but instead, I felt sort of alone despite having a supportive husband and friends.

Luckily, or with persistence, prayer and more than a little fear, we got pregnant again and after a tenuous pregnancy with pre-term labor at 15 weeks onwards, and bedrest almost the entire time, we had a healthy baby boy at almost 37 weeks. He faced a few health issues but nothing that was lasting. Life went on and we were hoping to try for another, but the doctor put a stop to that with stern words about how another pregnancy would endanger my life. A couple of years later, I had a hysterectomy and it was a done deal.

Still, all these years later, I run into a few people sharing their infertility stories and despite having different outcomes, we all faced some of the same thing: people who said ridiculous, stupid and insensitive things to us. I know it’s hard to know what to say when someone’s dealing with a health issue, a miscarriage, a death, etc., but there are some things you just don’t say. As unbelievable as a few of these are, I’m sharing a list of those things you don’t say to someone dealing with secondary infertility. 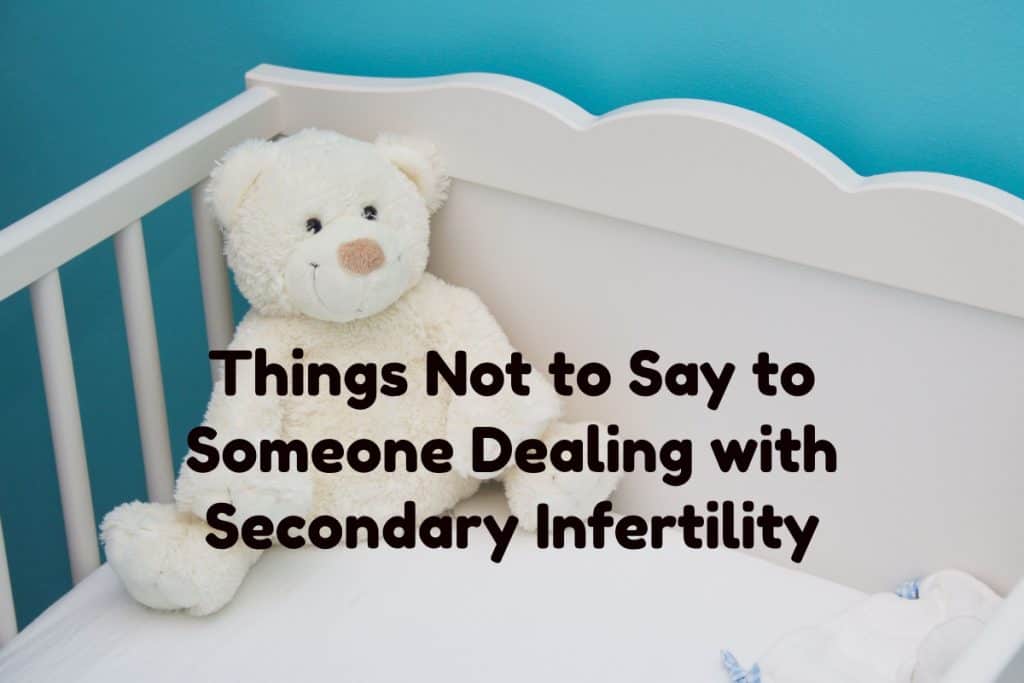 Yep, I actually heard all of these things. Fortunately for the speakers — but not so much for me — I was quieter back then. I cared more about keeping the peace than speaking up. I put up with stuff I shouldn’t have in order to avoid major confrontations. I wish I could go back and respond now. I’d be a lot more sarcastic, probably rude, but some of those people would have deserved it. I’m sure some people meant well, but others, no. If they had truly been concerned, their first words would have been “I’m so sorry. How are you?”

See, a couple people didn’t even ask how I was feeling. They just jumped straight into their proclamations of judgment and unsolicited opinion. Some couldn’t even get out of their self-centered circle to express their feelings in person. I got flowers and visits and a few memory gifts from friends, and those mattered immensely. In the end, I’ll make it really simple for anyone who wants to show concern or be there for someone.

Say this. Say only this.

Period. It’s that simple. Keep your opinions to yourself. Don’t make comments about why you think it happened. Don’t tell the grieving woman what to do; it is NOT your business. Don’t tell her to get over it. She will when she can. And if you’re pregnant, understand if she can’t handle seeing you right now. Don’t take it personally. It doesn’t mean she’s not happy for you. Don’t send a shower invite or birth announcement and tell her to suck it up. Just don’t.

You learn a lot about people when you go through an ordeal. Forgiveness is important but don’t ignore what people tell you about themselves. Sometimes these are windows into their character.

If you’re dealing with secondary infertility, or you have, I’m sorry. I get it. There is a world of support out there if and when you need it. Do not be afraid to reach out and ask for help. Suffering in silence is unnecessary. People care and want to help you. If someone isn’t supportive, avoid them; there will be time to deal with them later. It’s not selfish to do what you need to get through. Please take care of yourself, above all.