Last week was gearing up to be another busy one. We were running around all weekend, had a big client meeting on Sunday night and it all coincided with the beginning of a more serious workout regimen. On Tuesday night, we picked up my rental, a spiffy Kia Sportage, and I spent the evening getting prepped for Wednesday morning’s road trip down to San Diego to attend Social Media Marketing World 2017. My third year, I was looking forward to getting another alumni badge, attending the networking party on the USS Midway and boning up on all new things social media-related.

The alarm went off at 6am. Blergh. I am not a morning person, but I rolled over to get up after only one snooze button. I realized my side of the Sleep Number bed was a little low, so I stretched across to the husband’s side of the bed to grab the remote to put more air in it. Holy carp, that hurt. Assuming the bed was just a little lower than I thought…my side has a slow leak and I’ve procrastinated on getting a new air chamber…I got up to take the dog down to potty. Halfway down the stairs, I started having doubts that the back pain was going to go away with just a hot shower. By the time I got to the back door, where I realized it was raining at the same time the dog did, I was on the ground. I got the door open and tried to shove the pup out to potty but she was having none of it. Get wet? Uhm, no.

Normally, that would make me wonder what corner she’d use in the house, but the pain in my abdomen was burning, burning so bad that I couldn’t even really pinpoint where it was coming from. Radiating from my back on the left down through the lower front, I realized this was more than just back ache. Only partially standing, I made it to the stairs, regretting that I’d left my cell on my nightstand. Half-crawling, I made it back up to my bedroom but couldn’t even get back on the bed. I ended up on the floor next to it for about 30 minutes, where I’m pretty sure I was crying, loudly, but I honestly don’t remember it all. I know I called the husband, and next thing I knew, my older son was by me trying to help me get comfortable. Then there were wet boots next to my face and strangers asking me what was wrong.

Fast-forward to the ambulance ride, where they found I was so dehydrated that I blew three IVs before they could get any pain meds in. An older gentleman stepped in and got an IV going, and apparently I was given Fentanyl along with fluids and a Zofran tab. I only wish that had really done anything, but all I felt was a slight bit foggy. The panic I was starting to feel at this horrible pain ripping my insides resulted in my hands cramping up, and I knew I could control that but it was such an effort. I had to focus on answering questions and it was a real struggle since I was wretching while simultaneously wondering if the vehicles right up on the rear bumper of the ambulance could see inside. I didn’t even care if they could see me, it was more of just an odd wondering in between waves of pain.

After arriving at Kaiser Permanente Hospital, several minutes of processing and I was in a room. It felt like forever before the nurse and doctor came in, but I know it wasn’t long at all. My nurse was a Godsend. Kidney stone pain really does hurt more than having a baby with no pain meds. Another nurse asked a few times if the husband could come back in yet, and my nurse kept saying no, not until I was comfortable. I really didn’t think that was ever going to be the case, but she was sure trying. The IV was changed over to morphine and I got more Zofran. The nausea never quit so they added in another anti-nausea meds along with more morphine. I was out of it but finally I started to feel less pain. Then they brought in the husband and started sending me off for tests, like a CT scan and abdomen x-rays, amidst numerous blood tests. 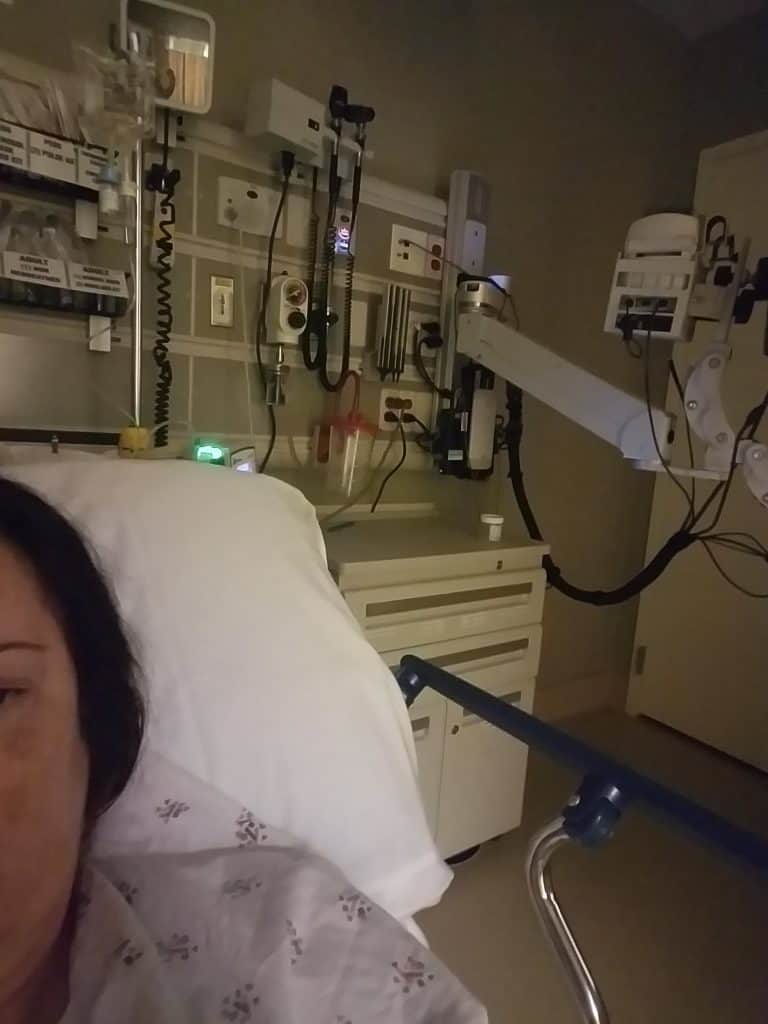 It wasn’t long before they reached the diagnosis of a kidney stone that was only halfway through. I also had some test results from the bloodwork come back too low and too high, so I needed IV antibiotics and phosphate. Wonderful. The silver lining to that is that maybe we’d not have known those issues without the kidney stone pain. 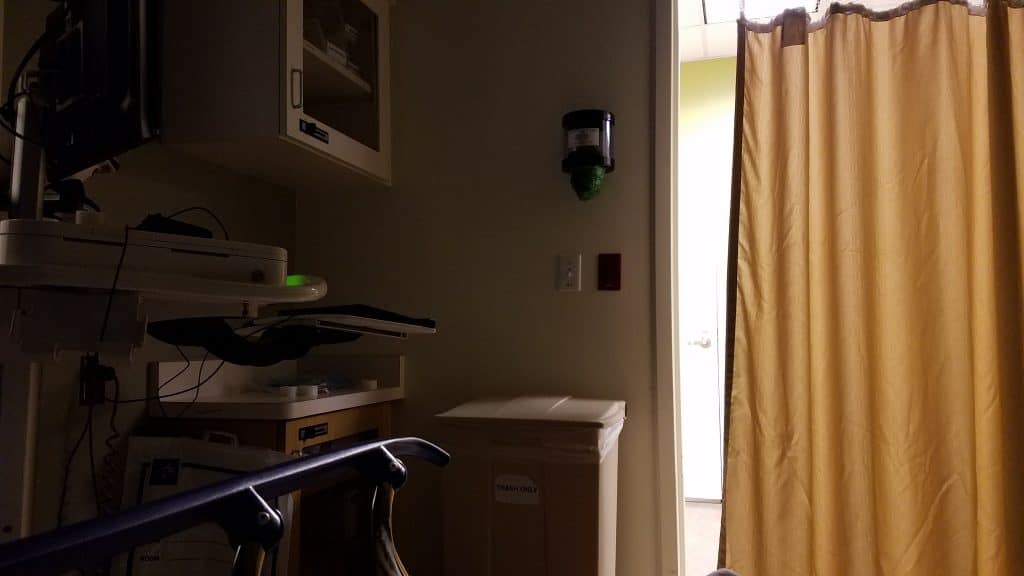 That was my view the entire day. We kept the light off because I alternated between sleeping and, well, throwing up….

When I was discharged, I was still out of it and still throwing up. The bag of medicines they sent me home with is big, but I did get some cool socks. My nurse thought of everything. I’d arrived to the hospital in a Thor night shirt and a pair of shorts I had my son find for me before I left. No shoes. No glasses. No bra. I had to roll out of the ER in a chair to get in the car in that attire, across the ER lobby. Fantastic.

So that stone…5 mm…it passed a day later, but it ruined my week. I didn’t get to SMMW17. I had to unpack all my stuff, stuff that stared at me as I was laying in bed, reminding me of what epically bad timing this silly stone had. Even after the stone passed, I was still left with soreness and pain for a few days. My energy was sapped and I still don’t feel up to par. That could be the infection or the antibiotics or who knows, but I’m glad to see the nephrologist tomorrow to find out if there are any further concerns. I’m hoping the weird phosphate level and other results were due to the pain or the stone, but the ER doctor didn’t seem to think so. I am thankful that while I pay a mint for my health insurance, at least anything that the doctors request is covered. I left the ER with a $50 co-pay, and my ambulance co-payment should be only $100. (I won’t tell you what I pay per month, other than to say that it’s a LOT.) The CT scan alone would cost far more so I can’t complain.

My point in all this? Pay attention to your body. If something feels off, don’t lay on the floor alone writhing in pain hoping it goes away. Drink your water and stay hydrated. Follow-through on referral appointments and ask questions. If you’re nervous, take someone with you. Having a second set of ears to help absorb all the information will be valuable. Eat as good as you can and stay active, but rest when you need to.

Life is short. Losing time with your family (and three sick days at work) and missing out on fun things makes you appreciate your health. Not being able to get out of bed or keep any food down makes you really miss normalcy. I’m not there yet, but pretty close. My new gym regimen is on hold, but I did lose a couple of pounds those days I couldn’t eat. I’ve stopped drinking coffee and while I miss that part of my morning routine, I’m past the headaches and not sure I want to start that habit back up again. No alcohol in over a week now. I’m not crazy though, I will enjoy some wine again after I’m done with the antibiotics and my stomach’s back to normal from the infection.

I’ve also had to say no to quite a few things. I know pushing myself isn’t a good way to rebound from the missed days. I’ll get back in the groove soon enough. 2017 hasn’t been my healthiest year yet, through things not in my control. The cold (aka the plague) that hit me for six weeks earlier this year is gone, just in time for this kidney stone issue to occur. This is not how things normally go for me, so it’s discouraging but onwards and upwards. Sometimes we need signs to slow down and maybe this was mine. I hope to be back to normal, saying yes, spending time back on the road and running the business like a boss.

Now it’s time for bed. Gotta get that beauty sleep.