A few months ago, I was having an online conversation with a friend. We were laughing, kind of ridiculously loudly, about something one of us had said. It went on for a while and before I knew it, I’d spent 30 minutes on this particular topic. Woops, gotta get up and start dinner! I looked down at the conversation to say bye, and my heart sank to my stomach as I saw some of our words. (If you’ve already read this post, I’ve added a “who knew” update at the bottom! Suffice it to say, this whole post is about not being taken advantage of, and realizing how you’ve let it happen. I think most of us, if we’re being honest with ourselves, have at least one or two moments where they realize something about themselves they don’t like, and it’s hard when that’s pointed out to us if we don’t notice it ourselves.)

I’d spent the better part of 30 minutes in a conversation that I wouldn’t have had in person. It was mean. It was making fun of something — not someone — in an offhand, impersonal kind of way, I was embarrassed. Ashamed.

Then it hit me. Who am I? This is NOT me. I don’t normally do this. I am not a petty person. I can throw a sarcastic comment easily and I can definitely be mean but I’m not proud of it nor do I want to make it a habit, so this realization was like a poke to my eye. 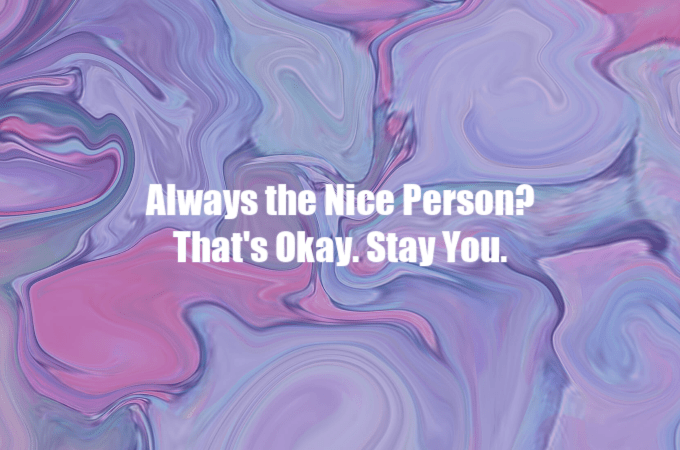 I’m always the nice person. I’m the one that likes to make people happy. I offer my home to those in need of a safe place to stay. I celebrate with people and try to lift them up through difficult times. I gift more than I need to.  And I listen, endlessly. This means I am often taken advantage of, and frequently, people think the fact that I don’t react negatively, or at all, means I’m stupid. I instead choose to not waste my time trying to change someone and to focus on better things, quietly moving back into my own lane. Dodging a bullet. Focusing on the positive. Backing away quietly.

So why was I suddenly involved in a conversation that wasn’t nice? And, if I really admitted it to myself, more than one?

The saying “birds of a feather flock together” has some truth to it. There’s also the fact that if you hang around someone long enough, you start to rub off on them and vice versa. You may not agree in a lot of areas, but you will have increased commonalities. You can hang around people without absorbing their habits and traits — or without even being their friend — but you have to pay attention, and I hadn’t.

I’d let this happen to me. It was my fault, as I’m in control of myself. I’d let emotions and circumstances and moods change me. I became something I’m normally not, and I’m sad about it. To make it worse, did I come off that way to others now, too?

Don’t let the world change you. Don’t get sucked into bad situations or conversations that make you uncomfortable. If your gut says something is wrong, listen to it. Stick to your true self, even if it means losing some friends. And they may not even be your friends anyway. They may just like that you pander to their narcissistic and negative discussions. You don’t have to do anything that makes you someone you’re not. Just maybe learn when to start saying no and how to avoid circumstances where you’re being used. Trust that gut feeling.

Stay nice. Stay true to who you are. That’s better than any joke or temporary conversation out there. And the person I had that conversation with? We had a heart-to-heart. I explained how I can’t make that a habit. The result? Laughter…because it wasn’t just me who had realized it and was uncomfortable! Talking to each other worked, we shared our feelings about how it had been a bad day, and now we work together on a better level. Things are good, and we haven’t done it again! Going along with my update below, this person is still unaware of my blog. Having friends outside of the blog community is critical, in my opinion, just like having friends, outlets and a support system outside of your work or job.

Update: apparently when you write about your own experiences, some people infer that you may be writing about them. The reality is that it was not directed at anyone that even knows about my blog. Why would I write about someone that could read it? I wouldn’t. I’ve been blogging since 2007; I know better. If the real person who I had “the” conversation with happens upon it, that’s an entirely random thing as they are not even a known blog reader and while I love to think my SEO is fabulous, it’s still unlikely they’ll find it unless they are searching for a post about this topic…which just adds to the unlikelihood (word?) that they’ll see this. So, this isn’t about you, because I do have other friends, along with co-workers, acquaintances and more….but thank you for proving my point.