This year’s weight loss journey towards permanently losing 21 pounds has been an interesting ride. I’m into fitness, but I’m also a busy mom of four, a business owner and a wife. And then there are the dogs, who on some days take more time than the kids. Losing weight is never as much fun as it was to put on. I started writing about my progress early in the year, in this post about Project 2018. Six months later, I’m down 15 pounds!

While that’s a really good thing, I’m also reminded frequently by my fitness tracker apps that I’m still not at my goal weight. Those last six pounds are still hovering, jiggling on my upper arms and I swear, two pounds of it are in my cheeks. I have a big face that really becomes apparent in photos, and it’s bothering me more as time goes on. I’m considering getting some help for it eventually, but in the meantime, I’m still working on weight loss the good old-fashioned way: watching what I eat and staying active.

Watching what I eat has become routine. As Project 2018 outlines, I’m following the macro eating lifestyle, where I up my protein, eat more frequently and try to stay under a certain number of carbs and healthy fats daily. It’s pretty easy, because there’s no off-limits food, so luckily I can still enjoy a glass (or two) of wine or happy hour apps with friends. The fitness part takes more work though, so I’ve just changed my fitness tracker to a new one, a version that’s more high-tech and user friendly for my lifestyle.

Using a fitness tracker for weight loss and health success is working for me. I had a Garmin Forerunner, but I went through three bands in 2.5 years, and this last time, I resorted to using a rubber band as the loop to keep the overlap of the strap flat against my arm. Really cool look, right? (I used a black one but ouch, it kept rubbing on my invisible arm hair.) Then the band tore where the strap sat, and I decided I was done, because the strap had to be ordered online and wasn’t the easiest thing to change.

Fast-forward through a lot of research and I’ve settled on a Samsung Gear Fit2 Pro. It’s available on Amazon for $177 right now on sale, as well as at Best Buy. (That link is to Amazon — if you happen to buy it there, I may get some money, fyi.) I had some Best Buy gift cards so I chose to buy it there, where I could also try it on because my wrist measurement was dead center between small and large. At 65 mm, I wear a small in the Samsung, but a large fit better for the Garmin. (If you saw my wrist, that would be surprising as I think they’re pretty tiny, even before any weight loss. Large? Really?) 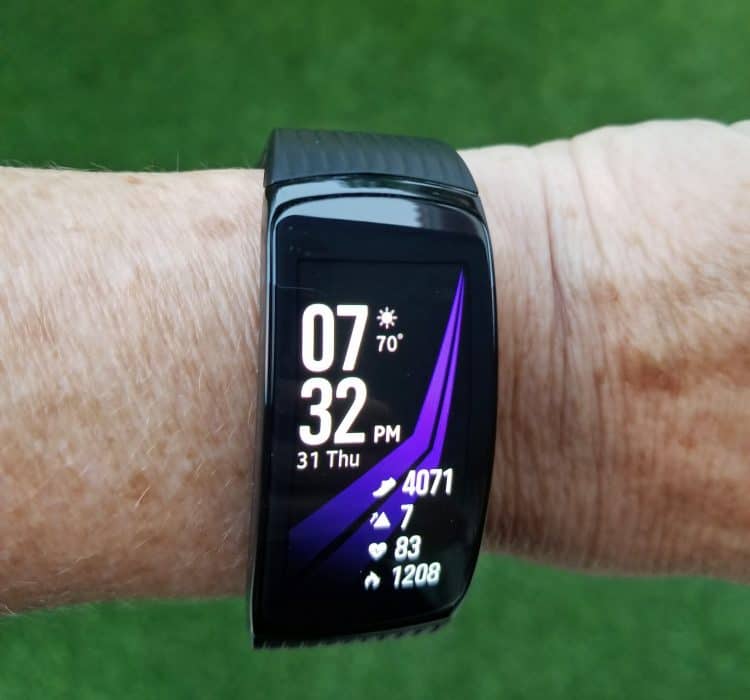 Using a fitness tracker like the Gear Fit2 Pro plays a big part in remaining fit and active. It’s certainly not a requirement for weight loss, but for under $200, I have something now to help motivate me, remind me to stay active AND to make it easier for me to check my run progress and stats.

Do you have a fitness tracker? Here are a few things I can do with mine that really help me.

See my daily step count: I aim for 10,000 steps, which is fairly average, so if I don’t get them, I know I’m being too inactive. 10,000 doesn’t sound like a lot, but you learn quickly that you aren’t getting up and moving around anywhere near you what you’d guess you are. (If you do a day at Disney though, problem solved!)

See my weekly workout history: I get caught up and don’t always remember which days I ran, and therefore, which I should run in the future. My fitness tracker shows me a history of my activity, from walks to runs to yoga, and more. Oops, only ran twice this week, better fit in another one today!

Visualize my run/walk route: my fitness tracker interacts with apps on my phone, syncing with my Samsung S Health app (inherent on Galaxy phones) and I can use the map it provides, on my tracker itself, to plan future walks/runs with length in mind…and it’s kind of cool to look back at the path, because sometimes I’m literally all over the map! It has a built-in GPS so I don’t need to have my phone with me to track my location and I can also sync it with the app when I return.

I didn’t think I’d need to be able to get texts on my fitness tracker, but one day in, I was hooked! I was on a phone call with a client and knew I’d gotten a text but I couldn’t put the phone down to see it. My son was at school and I was able to read the text without getting off the phone, using an auto-reply from a long list to let him know I’d text back after I got off the phone. It also allows me to add in personalized replies, so I added in “Running, will contact you when I’m done, thanks!” and I can send it with literally a couple of clicks. The convenience really does save time if you’re making dinner and get a call or text when you can’t leave the stove.

Fun bonus? You can entertain yourself much more easily when you’re supposed to be paying attention to something else. I may or may not have burst out laughing during a meeting when I got a funny meme sent to me. You were warned.

Runners live by personal records, pace and length of run, along with heart rate. The marketing copy I’ve seen for the Gear Fit2 Pro don’t mention that you can indeed see this on your fitness tracker as you’re running. LOVE! My old Garmin did this and I was bummed that supposedly the Fit2 didn’t do it. Now I can run and quickly, at a glance, see my pace, how long I’ve been running and how far I’ve gone.

The timer and stopwatch are handy, too. I am working on tightening up my abs, and I do planks for 60-90-120 seconds at a time. (Have you ever tried a plank challenge? They rock at getting you into a daily routine and strengthening a little more each day.)

The Gear Fit2 Pro fitness tracker’s lesser features are the stairs count — the altimeter is a little slow, so out of the 30x I’ve gone up and down my stairs today, it’s only registered six. The calorie count is also low, and it’s unclear whether or not it takes your heart rate into consideration. I know for a fact that yesterday I burned more than 1737 calories all day long, especially considering I ran 4.25 miles. (It does track running on the treadmill, which is a bonus.) The battery life is also less than I’d like. Considering you have to take it off to charge, there goes a full day’s worth of tracking, so I charge it overnight on its little separate charging station. It doesn’t require a computer but you will need one of those outlets or adapters that allow you to plug it into an outlet….and there goes your sleep tracking for that night.

If cost is an issue, there are a lot of other fitness trackers available. I bought my Garmin at CostCo, and they currently have the Fitbit line at a little better rate than on Amazon. (I had a Fitbit a few years ago, when it was just a step counter and sleep tracker basically.) There are a lot of inexpensive models available, so make a list of what you must have and what you think will be cool. My suggestion is that no matter where you want to buy it, go try them on and push the buttons. Make sure you like the way it feels on your wrist. (I tried on the Fitbit Ionic, $299 at Best Buy, and while I really liked the options, it is a lot bigger than many.) If you don’t want to carry your phone with you, you’ll want one with GPS built-in, not just one that connects to your phone.

There are also quite a few models that are more expensive. There’s a gorgeous Michael Kors model that I was considering, but it didn’t have a few of the options that the Fit2 Pro has. Mine is also waterproof, which is great if you’re a swimmer, which I’m not; I just didn’t want to have to worry about taking it off every time I showered. I WANT ALL THE STEPS.

Whatever you use, or don’t, motivation is critical in weight loss and staying fit and healthy. Do what you need to make it happen in whatever way works for you. Life is short, live a little dangerously and stay active so you can enjoy it ALL.