I had a list of things I wanted to plan Friday and get slowly started, so I’m not running around Sunday morning doing anything other than juicing oranges and popping corks. Saturday is decorating day, all the way down to getting my hair re-purple-ized. (Bright purple. Bright.) 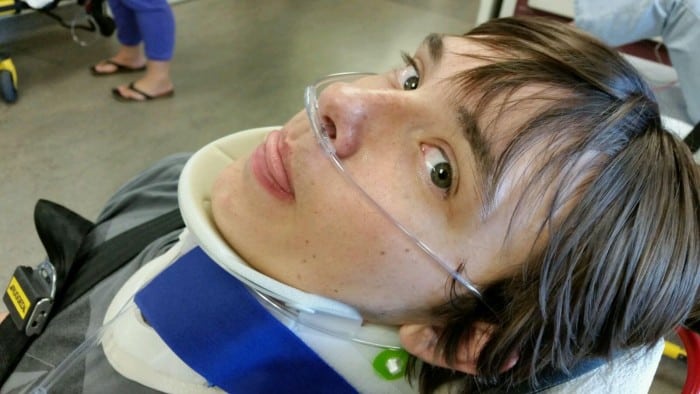 Some background: I always answer my cellphone…always…unless there is no ID and it’s an unrecognizable number and I’m sick or in the middle of a meeting or something else equally urgent. In all the years my kids have been in school, which is more than 20 years running, I’ve never been unreachable for any type of emergency. Until yesterday, which of course happened to be the worst emergency yet.

Four phone calls later, my husband learned that Little Dude (who has recently asked not to be referred to as Little Dude, but I have no new name for him yet) was on his way to the local hospital in an ambulance.

Moms out there, you get where I’m coming from. We’re there for this stuff. We’re there for the little things, the big things and all the goofy stuff in between. This is why we are here to begin with. We do this stuff. It’s mom’s job..so you get why I was feeling like a huge #MOMFAIL that I hadn’t been able to pick up the phone. (If you’re a SAHD, don’t take offense to that. I don’t know a mom out there, employed or not, who doesn’t still want to be the one there for emergencies, big or small.)

Fast-forward a little bit and they’ve removed the C-spine and oxygen cannula. He’s got an unused IV port in his left arm and he’s in a gown, post-CT scan, and we’re able to rest easier there were no brain bleeds. 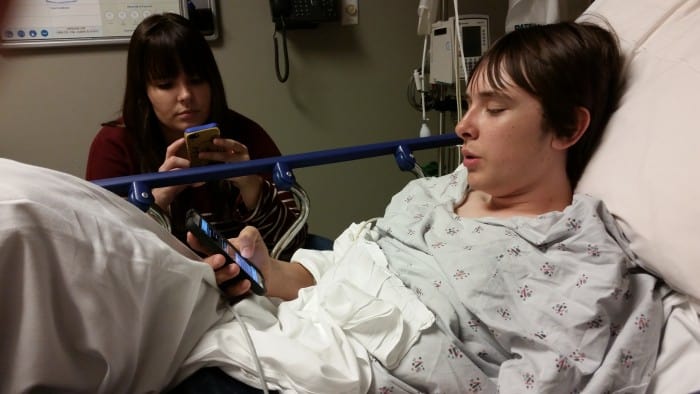 The scan did confirm a pretty darn big bump and a mild-to-moderate concussion, but there’s not much they can do it for it other than to observe for further problems. We stayed at the hospital for a few hours, where he received ibuprofen for head pain and zofran for nausea. (And one of those seriously strange looking oddly-shaped thin plastic tubes that are the new emesis basins. I still think they should have gone for another shape.)  After another visit by the neurologist and the ER physician, he was released. I’m not sure he was happier that the IV port was being taken out or that he got to go home.

I’m leaning towards the IV port. That was really bugging him.

Honestly, I was initially concerned that there was some over-reaction by calling 911, but after seeing him and hearing his repeated, strange questions (like “Where am I? What was I doing? What day is it?” over and over) and talking with the doctor, I’m glad the school made the call that it did. It was too late if I didn’t agree, but it was solid. You don’t mess around with a concussion, and as they learn more and more about head injury, or mild traumatic brain injury which it is sometimes called, we learn that you need to take it seriously, follow proper safety protocol and allow your brain time to heal.

Years ago, we were told not to let a concussive patient sleep. Before release, we were told to let him sleep as long as he wasn’t vomiting or acting worse — that’s a huge change from years ago. Cool, because we were pretty exhausted by then, too, though not enough to get a good night’s rest on the couch by him and his very noisy dog, who was so out of sorts he would turn around and around and around on his bed on the floor. All.Night.Long.

What exactly is a concussion? Technically, it’s a brain injury caused by shaking of the head or an injury to the head. A lot has been learned about it as athletes find themselves experiencing multiple concussions and further brain injury, and new guidelines have come out about the dangers of repetitive injury and/or not giving people time to heal their brain before they’re back out on the field.

A quick Google search for “concussion” will show you a long list of articles about lawsuits regarding athletes, new rules for coaches, schools and this interesting Washington Post article about how girls suffer sports concussions at a higher rate than boys. Concussions can cause personality changes, depression and symptoms for months longer than initially expected.

In regards to my Little Dude (still no new nick), he hopefully will return to school on Monday. He stayed home on Friday and he has a pediatrician appointment on Thursday morning. He’s got paperwork to be out of P.E. until mid-March, and at that time, we’ll determine if that needs to be longer. We checked with the school to ensure that his teacher is aware of the new concussion guidelines; we need to be sure that if LD experiences dizziness or headache after he’s released to play, the teacher is lenient and understands that symptoms can pop up for a long while. Luckily, his teacher is also a paid coach outside of school and on top of safety guidelines so it won’t be an issue. No basketball playing for weeks, and he has to be cautious when he resumes. He’ll see his neurologist in a month; since he’s already a migraine patient, they’ll watch that carefully and we already have a neuro that’s familiar with him. A teenage concussion is no joke.

We know to watch for unusual behavior, nausea, pain, etc., and he seems in no hurry to start moving around again. We still don’t know the whole story, other than he was guarding someone, got knocked down, landed partially on his butt and went backwards. He got up and walked to class — long-term memory was not affected — and when in class, started experiencing issues with knowing where he was, how he got there and he was forgetting things. They followed protocol, got him in a wheelchair and got him up to the office quickly. He still remembers none of this. Doctors aren’t sure if the memory is lost as a way of protecting the mind from trauma or if there’s a more medical reason.

Helmets are important. Adult supervision is of course good but in the event that’s not available, as we can’t watch them 24/7, be on the safe side and seek medical help if there’s a possible head injury. And read this article on concussions in children. Be aware of what to look for and make sure anyone caring for your kids is aware, too. Stay safe and stay healthy!