I hate drama, online and off. I’ve tried to teach my kids the positives and negatives of social media so they too can avoid Facebook drama. Facebook can be a huge resource, a big network of information and friends, but if you’re a needy person or someone who doesn’t have the nerve to speak to someone face-to-face, Facebook and other forms of social media can provide a space to rant on someone or put them in their place or passive-aggressively chastise. Mad at someone? Find a really cool meme and slap it on Facebook. No words necessary. Ahhh, I feel better. Right?

Nah. That’s high school. Here’s the deal: people that you’ve intended it for won’t see it or infer your meaning that it’s for them.

I have taught my kids to use their words. Out of my four kids, only one really uses Facebook much, and while even she has a couple of people who like to sub-tweet and hint around points, she, at the ripe age of 21, is beyond most of the immature garbage that I see way too many adults use.

Upset with someone? Call them. Or better yet, ask to meet them. Talk to them in person, face-to-face. Then you don’t have to grammatically butcher some vaguebooked statement and hope you don’t misspell too many words.

Nowadays, people have lost the art and/or the ability to have a good old adult conversation about a tough topic. Sure, I don’t know if many of us at all enjoy confrontation, but if you remain calm, it doesn’t need to get to that point. Talk. Explain the problem. If you want it fixed, give the person a chance. If not? Say that, too, but at least use your words, those things that we are constantly telling our children to use yet so many times, as adults in the age of Facebook, we regress.

Today, if you’re upset with someone, it seems like you immediately leap to unfriending. If you’re on the receiving end of it, it’s sort of like the trash takes itself out. Now you know not to bother anymore. Some people do it as a form of attention-seeking; thing is, many of us don’t even realize we’ve been unfriended for a long while, if ever.

If you’re like me, and want to still enjoy Facebook, or find a way to co-exist as it can offer good times, here are nine ways to avoid Facebook drama. Some are fairly basic Facebook privacy and feed settings, and a couple others are a little more organic.

Use lists: Put your closest friends on one list, your extended group on another, family on another, etc. This gives you a measure of control over what you see on your feed and who you share posts with.

Just keep scrolling: Stop clicking Like on the posts or status updates shared by those that are typically dramatic or problematic. This tells Facebook that these people aren’t as interesting to you, and by attrition, they will stop being shown as much. You needn’t worry about lists or unfollowing, it just happens on its own.

Unfollow: sometimes you just have to do it. They won’t know and you can still visit their wall when you want to…or when you’ve had enough coffee or wine to deal with whatever comes down the pike next, because there’s almost always a next.

Be sensitive or thoughtful: when you go to share something that is potentially upsetting, click the little icon that says Friends, and scrolling down to click “Custom,” or if that doesn’t show, clicking “More options” will bring up “Custom.” 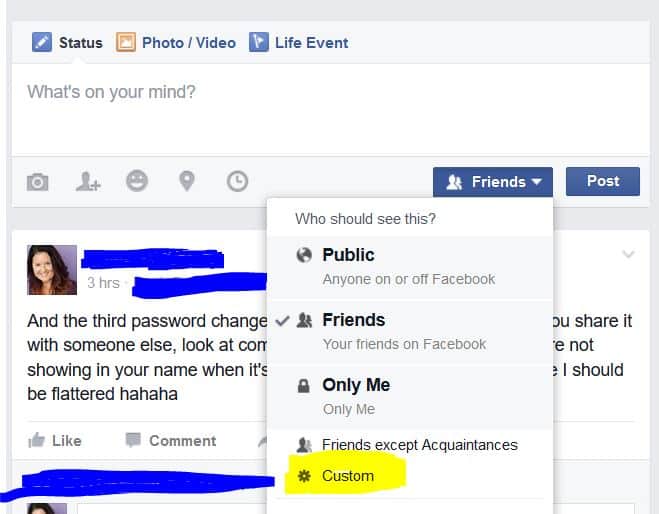 Choose the “Custom” option from there, and in that window, you’ll add the name(s) you don’t want to see your posts. (Just be careful, or you may forget you have it on and then mom will want to know why you’ve suddenly disappeared off of Facebook. I inadvertently blocked a kid doing this once. Ooops.) And keep in mind, if you have to keep doing this, or hiding peoples’ posts, they will end up finding out AND if you’re doing it a lot, you need to revisit why you’re doing it in the first place. 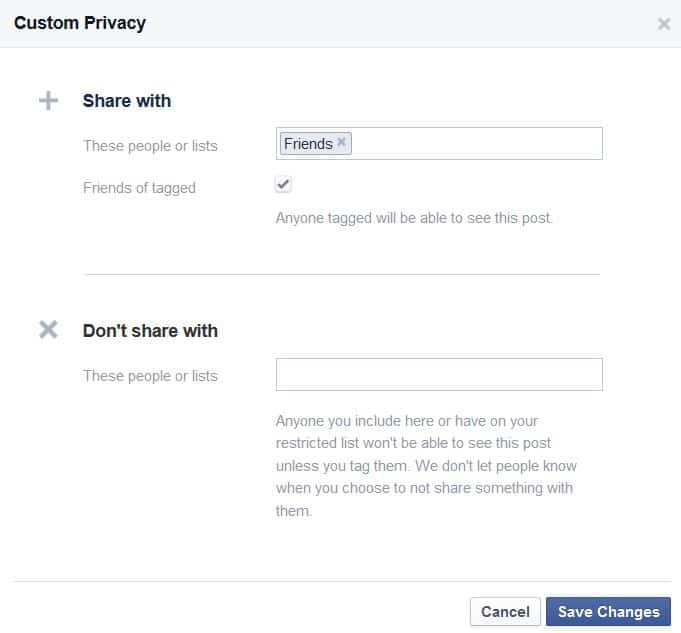 Don’t enable: If you can’t help yourself and have to enable, I mean, reply, don’t! It’s their behavior, so it’s not up to us to discuss unless they ask us but we also don’t have to contribute if it bothers us. We have a choice to avoid what we see as drama.

Don’t pick sides: nothing’s worse than getting stuck between an arguing couple. You cannot win. The minute one of them tells you something about the other, you’re done for. DONE FOR. Trust me on this, they aren’t always going to tell the other person the truth and you will be left hanging out to dry with super-important details blowing in the wind. Actual facts are left out in the heat of the moment. Facebook is still the written word and its so easily misinterpreted, you don’t want to be in the boat of someone wondering why you said xx, when you meant xxx if the comments were in context. And then there’s always the fact that one person’s embarrassed about their crappy behavior. My point? If you see dirty laundry between people on Facebook, don’t engage. Run away, far, far away. Even your best intentions to be supportive are lost in the mess. I repeat: you cannot win here, so don’t even try. Keep scrolling and trust your instincts that you are being a better friend by doing so. (Don’t put people in that situation either. It’s not fair.)

Don’t take the bait: if you share something you feel strongly about, whether it’s the fact that below 70 degrees is cold or which presidential character is the best, don’t engage when people start to argue…if you really want to avoid Facebook drama. You can still share your feelings and keep it argument-free on your wall. (And the more you allow it on your wall, the more it will happen.)

Check your facts: if you’re going to share that aforementioned stuff you feel strongly about, be sure it’s accurate. Nothing incites people more than the need to correct someone that’s wrong, even if they aren’t, but if you are? God help you, get the wine now. “I can’t go to bed now. SOMEONE’S WRONG ON THE INTERNET!”

Re-read your text: if you’re unsure if your statement will be misinterpreted, don’t say it. Even a simple “LOL” can start World War III. I’ve even seen a humble smiley get the axe. Unless you know the person and you’re sure what they will do — and let’s face it, how many people do you really know 10000%, unless they just posted it to Facebook — watch what you say. Or say nothing.

I was going to say unfriend, but that’s a pretty sad way to deal with drama. If you friended them in the first place, put on your big girl panties, get over being butt-hurt and speak up. A lot of things can be easily cleared up when you give the other person the chance. Otherwise, you’re very likely wrong, or at least missing out on the opportunity to say “I tried.”

Facebook drama doesn’t have to ruin the experience for you. There are ways to avoid it that go beyond not friending someone in the first place. I don’t randomly friend people; I have to know you, be in an organization with you, or somehow our relationship is social media-related. Working in the field, this is how we network, but I’m still very cautious. My sanity is worth it. Life’s too short to have drama anywhere that you have control, and since Facebook’s like your window to the world, you have control. Use it. Smile. And be nice out there.