You are here: Home / Entertainment / Adrift Movie Out on Blu-ray and Digital on September 4
Tweet
Share
Pin
0 Shares

Imagine you go out for a boat ride. It’s an adventure of a lifetime and you’re excited about the possibilities. Then disaster hits and you find yourself floating, adrift, in the middle of the ocean. It’s the stuff of nightmares, and quite honestly, one I’ve had many times.

This nightmare came true for the real inspirations of the new Universal Pictures and STXFilms movie, Adrift. Two young adults, played by Shailene Woodley (Divergent, Fault in Our Stars) and Sam Claflin (Hunger Games, Me Before You), meet through a chance encounter and later decide to set sail on a long journey across the ocean. They were unaware at the time that one of the biggest storms in history was building and would have disastrous effects on their trip.

No spoilers, but the title alone gives away the main gist of the story, except that Sam Claflin’s character, Richard, is badly hurt after the storm and Shailene’s character, Tami, is left on her own to get them to safety.

I love cruises, and have cruised a couple of times now. I would do it again tomorrow, especially the one to Alaska and amongst the whales up by the northern passage, but this movie kind of confirmed for me why I am not a sailor. Tami and Richard epitomize the words bravery in their quest to survive, and Tami’s love for Richard pushes her beyond anything she thought she could ever do. 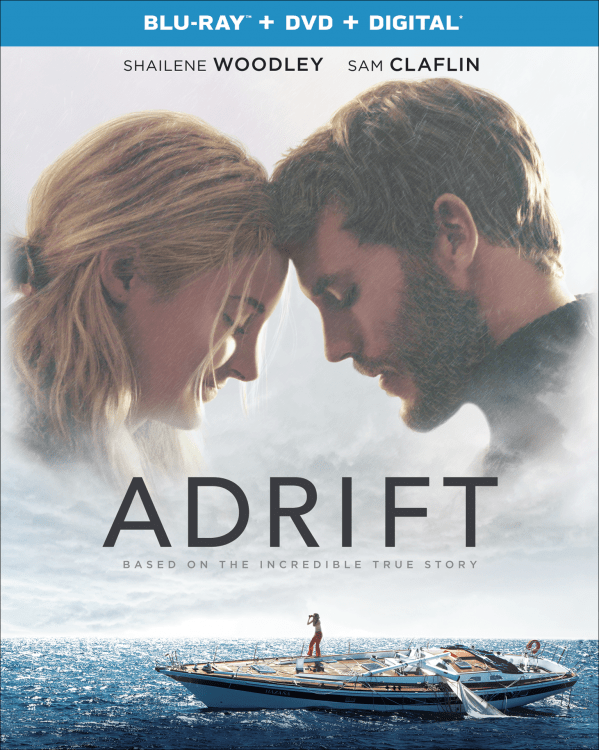 Adrift will be available on Blu-ray™, DVD and Digital.

Grab a copy of Adrift today and let me know what you think!