Here’s a holiday tip from me: buy Utter Nonsense for party or family game night fun! 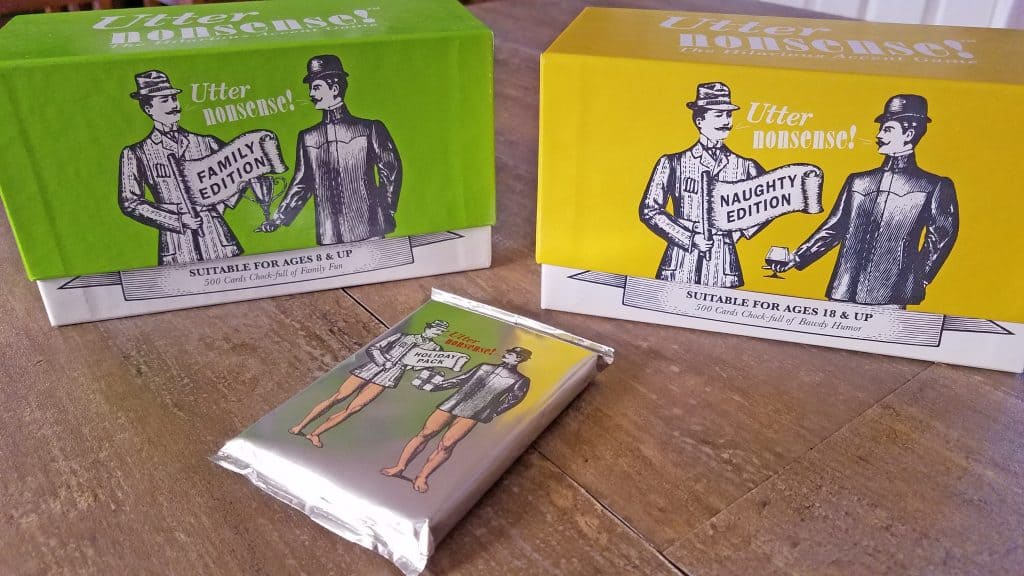 Since our kids were little, we’ve had spontaneous family game nights. For a few years there, it was a regular thing but as the kids have gotten older, that’s harder to do. Now we don’t do it as much as I’d like but we still try to fit it in whenever possible. We have a few different games we rotate through, but they all have a couple of commonalities: they have to work for a large group of at least six of us and they have to make us laugh.

Utter Nonsense meets both the criteria and definitely makes us laugh!

Utter Nonsense is a simple game to play and produces a lot of giggling, silliness, creativity and “oh no, I don’t know how to do THAT one!” 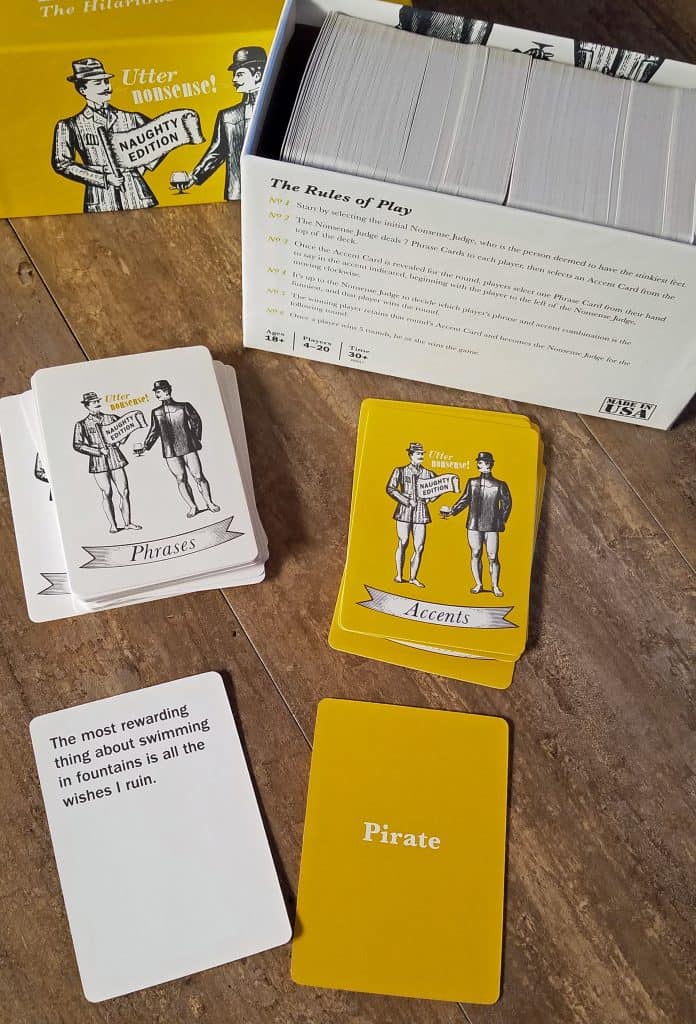 The premise of the game is simple. Choose a judge, the person who will make the decision about who wins each round. The judge deals seven Phrase cards to each player, and then he pulls one Accent card from the pile. He reads the accent to the players, and they each choose the phrase in their hand they think most fits that accent. Going around the table, each player reads their chosen phrase aloud in the announced accent. The judge then decides which selection was played best, and that person wins that round. The player keeps the accent card in a separate pile and at the end of the round, the player with the most accent cards wins.

Let the hilarity ensue! Our family can be kind of competitive, and depending on the cards you get, some times you really don’t have a good hand to play so you have to really exaggerate your accent. Like the above example: a pirate accent is always fun! 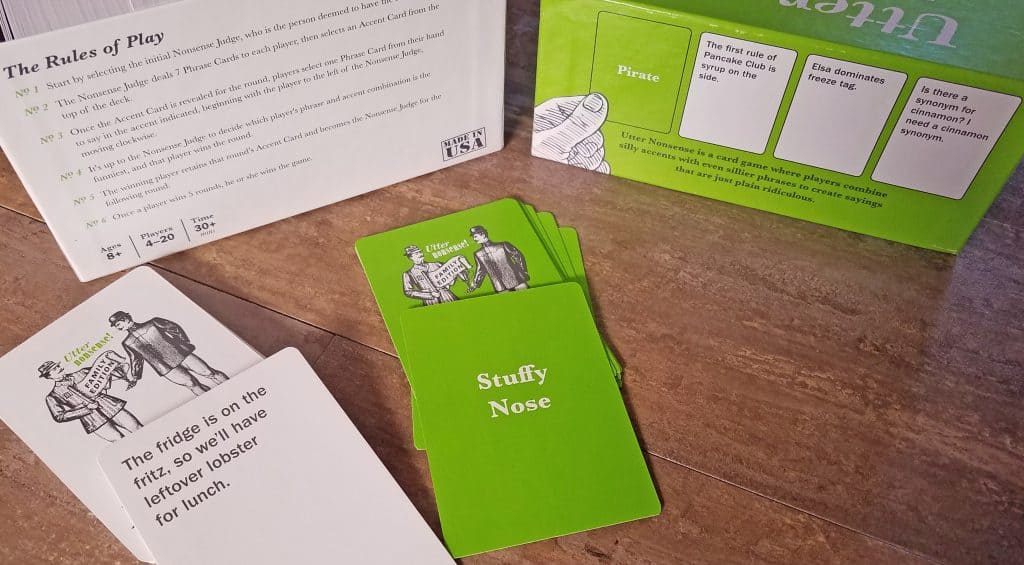 Utter Nonsense comes in a family edition for all ages as well as a naughty edition for ages 18 and up. (Take the age range choices seriously — the choices aren’t horrible but I wouldn’t want to explain some of the words to small kids!) The naughty edition was particularly fun when a few of us ladies sat around a bottle of wine. It’s a fun way to break the ice if you’re adding a new person into the mix or if you just want to loosen people up. You can’t stay serious for long when playing Utter Nonsense!

Thank you, Utter Nonsense, for sending me both games AND a special holiday edition pack. We’re set for upcoming family game nights later this month, probably with a punch bowl of good, good egg nog.

Happy holidays — maybe buy Utter Nonsense as a Christmas gift and make family game night easier for friends and family, too! Available at Target for under $25 per box, you can buy it today and get it under the tree tonight. For more information, visit the Utter Nonsense website, then get laughing! 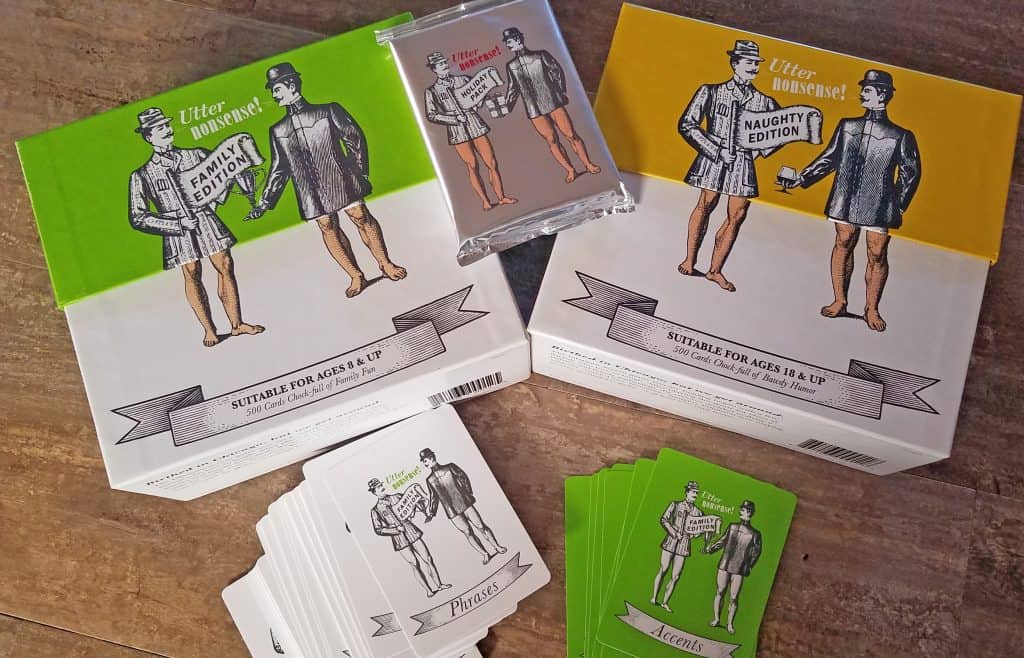