Last week, my son, my son-in-law to be and I were guests of Sea World San Diego at their Rudolph’s Christmastown party. From the minute we parked and entered the education area gate, we were greeted with the holiday spirit. Sea World staff put blinking holiday light necklaces around our necks and off we went to explore the beautifully decorated Christmastown. What’s a better way to start the season than celebrating at Sea World?

Heading towards the music, we ran into our first animal of the night: a porcupine! Ever pet a porcupine? It’s not what I would necessarily associate with Sea World, but there he was, letting us pet him. The smile on my son’s face was priceless! First a blinking necklace, next an animal he’s only seen on YouTube — what next?

Food was next, and you can’t go wrong when it comes to a teenage boy. He immediately headed for the buffet table, covered with mac and cheese and mashed potato pizza, which is exactly what it sounds — pizza with a white sauce, covered in a layer of crusty mashed potatoes with cheese and bacon bits. Whoever thought of that flavor combination is a genius.

Then it was time for the lighting of the Christmas tree, presented by the entertaining elf band. This huge tree is gorgeous, and it just happened to be in my most favorite of color schemes: purples and blues.

Twinkling lights are everywhere, from the entrance of Wild Arctic to Atlantis, where we made a pit stop so Little Dude could check out the rays and ask questions of the staff, who so patiently answered all his questions. She also gave him wonderful advice on getting into the field, which is something he’s wanted to do ever since he got kissed by a walrus back in August. (You can read more about that amazing experience here.) 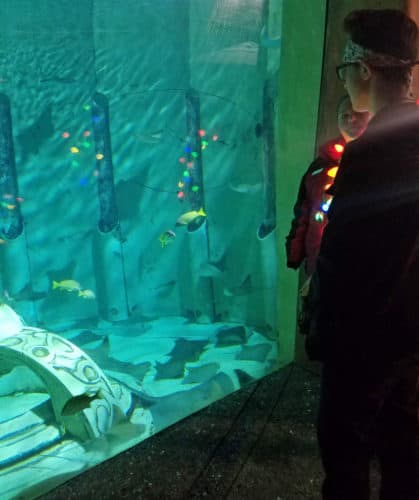 Then it was off to Santa’s Cottage. We each had an idea of what to ask Santa, but we had a bit of a stutter when our turn came. We’d been so entertained by Amanda, the 642-year-old elf who guarded the entrance to the cottage, we forgot what to ask Santa for! Amanda, you are one fantastic elf and you rolled with the very odd questions my son asked. Thank you for making his night even more fun!

Santa’s Cottage is not just home to Santa though. It’s surrounded by gift shops with very cute and unique holiday decor like personalized tree ornaments, several food options and a stage where Mrs. Claus happened to be performing. Singing and dancing with elves, the perfect way to get into the holiday spirit if you weren’t already. 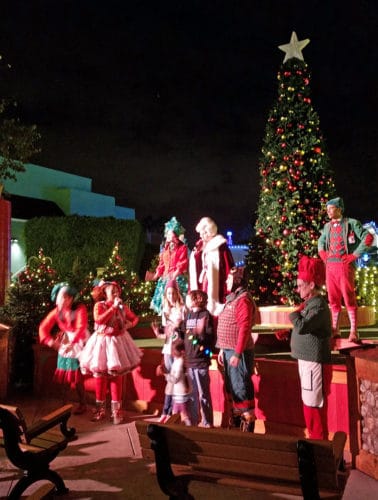 Food is everywhere, but the desserts and hot beverage bars were a popular place. I tried a waffle on a stick with a maple bacon crumble dipping sauce. It was of the ohmygosh variety, so I didn’t get to try as many of the other desserts as I wanted but look at this array! Check out the cupcakes and the holiday crepes in addition to other special additions to the menu.

Throughout the park, you’ll find so many fun things to do. Reindeer games like ring toss and so many photo opps with the characters of Rudolph the Red Nosed Reindeer, you’ll need a couple of hours to do it all. We ended up at the Holly Jolly Marketplace, too, to buy a special ornament of my favorite character. You’ll read more about him below.

Do you remember the story of Rudolph the Red Nosed Reindeer? Not just the story of a reindeer who was teased for having a red nose, but the story of all the other characters? They’re all in Christmastown! Everywhere you walk, you’ll see sights and sounds from the movie, but my favorite thing of the evening was seeing Bumble.

I have such fond memories of cuddling on the couch to watch Rudolph every single year. As I grew up, I still watched it and when I became a parent, the movie became an important part of our family traditions. Seeing Bumble, the abominable snow monster, in real life…well, I did a little dance as I came around the corner and saw him. Then he did a little dance. We danced together. We hugged. We kissed. We hugged some more.

Bumble, I love you.

All of us got fun photos taken with him, and I felt like a little kid when mine was taken. Easiest photo ever, no one had to tell me to smile!

Christmastown is also home to Sam’s Snowy Wonderland Snow Globe Experience. It’s literally a huge snow globe and you get to be the star! I’ve got a favorite snow globe that is a very special part of my holiday decor each year. It was given to me probably around 15 years ago by a New York friend of mine who I met via an old job. The snow globe has moving parts inside and is a scene of a snowy New York City…with the twin towers in it. I will treasure this snow globe forever. Thanks to Sea World, I got to be in a snow globe, too. 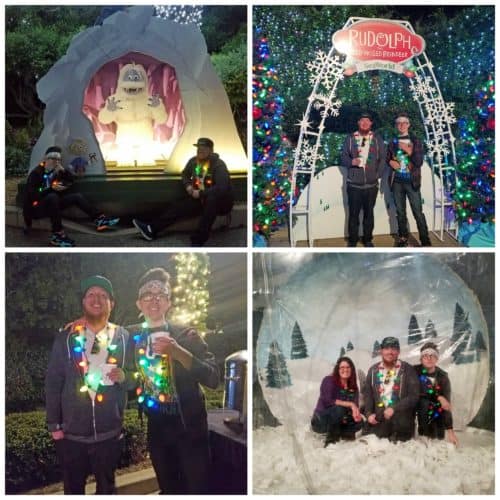 And of course, no night at Rudolph’s Christmastown would be complete without a visit to see Rudolph himself. I don’t think I’ve seen my son smile so much in one night..or the last few weeks altogether! Smiles that you don’t have to ask for..any mom of a teen knows how hard that can be. (Ever see that meme of a dog smiling oddly with its teeth sort of chattering? Yeah, that’s really what it’s normally like when a mom asks her kids to smile.) 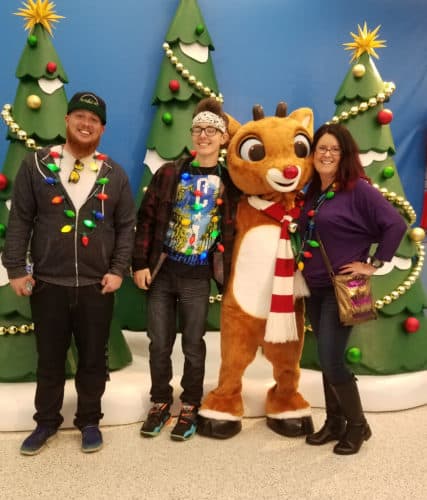 Our night at Sea World was a success, but we expect nothing less when we visit. Sea World is like its own world, and everywhere we look are animals and opportunities for education and awareness. We are lifelong Sea World fans who are happy to hear of all the things they do to rescue animals and to help us learn about the world around us. Their tireless efforts are often undervalued. 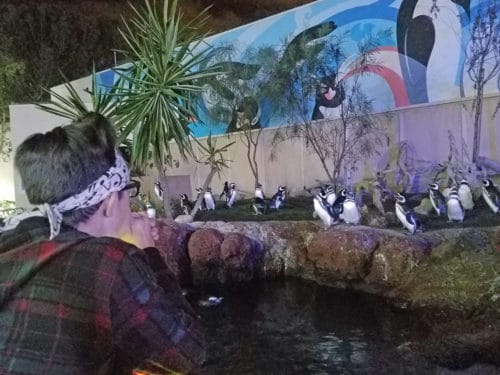 On our way out, we had to make one last stop to see the penguins. Little Dude’s convinced they were singing in response to him. I’m not sure that was the case, but if it makes him even more into animals, I’m good with letting him think it. These penguins sure didn’t seem to mind.

You’ll have a blast! We left with our blinky necklaces, tickets for a future visit and even this cute cookie decorating kit to do together at home. Happy holidays! 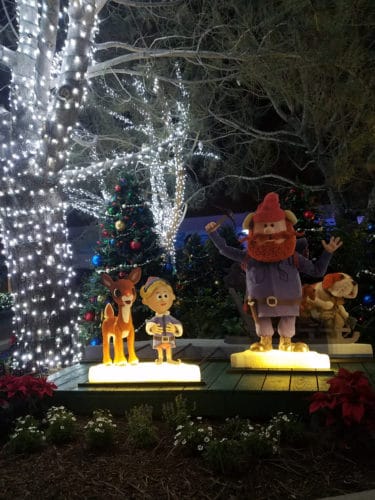