You are here: Home / Lifestyle / Some People Make You Lose Your Faith in Humanity, Some Restore It
Tweet
Share7
Pin
7 Shares

We live in a society generally filled with busy people, stressed out from the responsibilities of working to pay for their bills, figuring out how to make ends meet, fitting in all their obligations and still trying to have time for their family and a social life. Life moves fast and some days, it takes all we have to keep up. The stress and the worry can get to you, changing your mood and giving you very little patience or concern for others. Maybe that’s giving people too much of the benefit of the doubt, but otherwise, we end up beginning to lose our faith in humanity.

We are all in the same boat — busy, stressed, going 24/7 — yet when we go about our daily business, do we remember that? Are we trying to remember to treat people as we want to be treated, or are we so self-centered, we don’t care at all? Do we really just need to go off the cuff, speak our mind and say to heck with it, I do what I want? 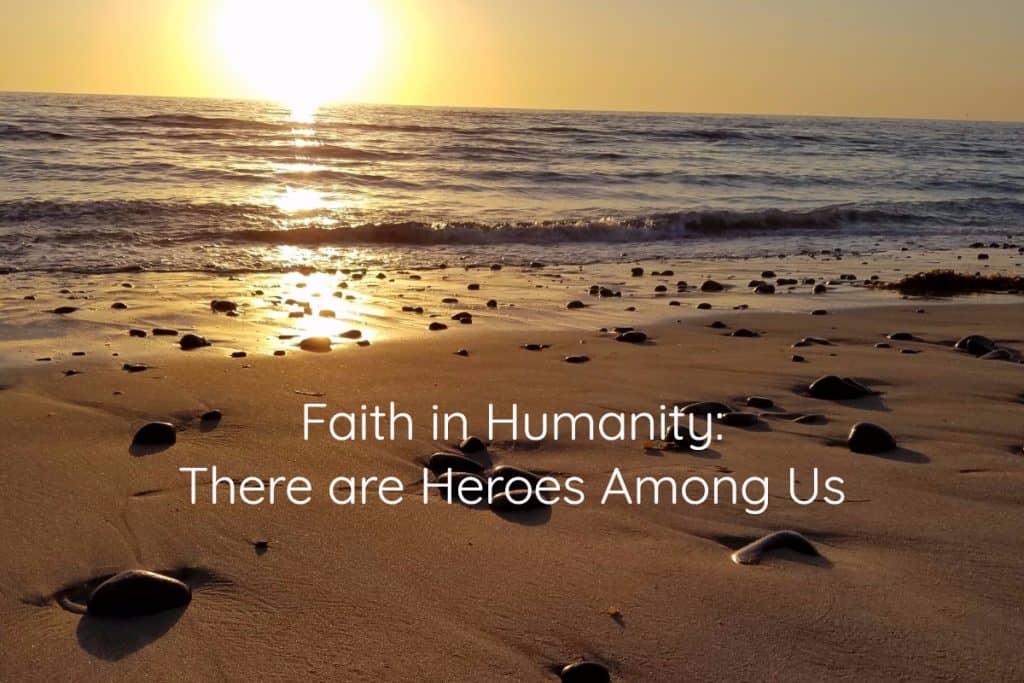 Recently, I had a really bad experience that shook me up a little. Literally, had me shaking, because it was something I’d never had happen to me before. I took my dog to a new veterinarian to get his teeth cleaned, and the vet has an unusual policy of no appointments at all, walk-ins only. This means people line up 30-45 minutes before the office opens at 8am. That alone can be a recipe for disaster, as not everyone wants to wait in line as one would expect. My dog had a messy accident from nerves, and my clean-up materials were inadequate for this particular level of mess. While waiting for the office to open, so I could borrow their cleaning equipment (a hose, a shovel, etc.), an elderly woman made a stink about the mess and another man chimed in. Before I knew it, I was being yelled at, loudly, by three strangers, all of whom had been sitting in cars, far away from the door yet ‘in line.’ They got out solely to yell at me. When I tried to explain that I couldn’t scoop it with my hands — especially without ability to wash them — and was using the office’s hose in a mere 8 more minutes, I was told to be quiet. Stop talking. “You’re disrespecting us by not having cleaned it up already! Even worse, you’re disrespecting this old lady by not taking the paper towels from her!” (But it’s not disrespectful to yell at me? Or to call her an old lady?)

I was mortified. I always clean up after my pets, but this situation wasn’t something I could just ‘clean up.’ I had good intentions, and would have gladly explained had anyone given me a chance before publicly berating me. As the loudest man continued to encroach on my personal space, I turned around to see if anyone was going to be able to come to my aid if this man didn’t stop getting close to me. I was amazed to see that all the other men turned away. No eye contact. No “Buddy, back away.” Nothing.

We were so close to getting into the office, albeit apparently fifth or so in line, because who know how many more people were going to materialize from their vehicles and claim a spot in front of me and the others actually waiting by the door. I wanted to wait, but I didn’t feel safe. I wanted to believe that I was, but when the other people averted their eyes in a clear sign of “we don’t want to be involved,” I was so disappointed. I turned my dog around and led him back to the car…whilst still being yelled at by those strangers. Maybe those who wouldn’t step in didn’t feel safe either. Maybe they didn’t like the idea of a little mess off to the side of the sidewalk. Who knows, but to not feel safe while taking my dog to the vet, simply because he’d had an accident?

What the heck is wrong with people anymore?

I like to believe there are good people out there, really, but some days, it’s hard. I came home that Monday, a mix of mad that my dog didn’t get his dental care and the bullying man’s dog did and amazement that the strangers had taken it to that level. Humiliation, because I had no choice and they didn’t give me a chance to clean it up as I would have. They assumed the worst. He used some bad words.

He called me a “bad person.”

Dude, we’re talking about dog poo. I was standing there quietly, keeping my dog at my side, out of anyone’s way and letting all the people in cars go inside ahead of me. I didn’t really care about that, I knew we’d all get seen soon enough. To get so angry at another person for this? How does he get through the rest of his days? And how do people that do nothing sleep at night? I can’t imagine having been on the other side, been a bystander, and done nothing. Words are just words, and I’ll get over it, but I’d like to think that if he had gotten physical, someone would have stood up for me and helped me.

Then again, I don’t know. I didn’t walk away feeling like it.

Instances like that can really make you feel worried about humanity. There are the daily things that make me sad: the people who are so self-involved, so self-centered, you don’t exist unless they want to talk about themselves and they display so little concern about others…the man who walks in the door in front of you and lets it slam on you…the lady who cuts in front of you at the CVS line, when you’re only buying one thing….the people that come to a four-way stop, after you, yet blast through first just as you start to go…..the guy who bought all 35 mangoes at the grocer, taking some from another person’s cart. (All true and recent stories.)

Those are the things that you see so often, you almost make excuses for them. They’re tired, they’re busy, they’re stressed….but everyone is. None of this is an excuse to be so rude, so thoughtless, so unkind to others.

Small or not, the ways we treat each other make me worried about the world we’re leaving our kids. We can’t share an opinion anymore without being told we’re wrong. Gone are the days of being able to agree to disagree. Caring about your neighbor just doesn’t happen like it used to. Families always argue, but now we argue with strangers as though we know them. It’s all about ME ME ME ME ME.

Then a natural disaster occurs. You worry because you see the downfall of human interactions these last few months.

And it turns out to be a big surprise, because people have pulled together again this week, proving that kindness and love for one another is out there. The first story I saw today on my normal morning show (Good Morning America) was of a man who’d been asked by his wife to go save her friend and her family. He saved them in his jon boat, taking them to a safer location while people called out to him from the roofs of their homes. Then he went back out and started rescuing those people, then more, then more…before he knew it, he’d saved over 30 people. That was just yesterday, and he got back up this morning to save more.

There are random heroes among us.

This man was saving strangers, a far bigger risk and expenditure of effort than holding the door for someone, waiting in line or walking around a mess on the sidewalk. If he can do this, why can’t we all do better with the little things?

This man undoubtedly renewed the faith of a lot of people. His random acts of kindness, lifesaving kindness, did much more than he imagined. The ripple effect of his actions inspired others to do the same, and without any intention at all, he’s a hero and a role model that we should all aspire to be.

Tomorrow, maybe we smile at our neighbor. We hold the door open for a stranger, or we say thank you to the one that holds it open for us. We ask someone how they’re doing — and we listen to their response. We bite back our complaint and have a discussion that’s not about us. We let the pedestrian cross in front of our car even though we’re in a hurry. And we give someone a break if they do something we don’t like.

We can’t change a lot of things in this world, but why not change what we can? Maybe we can help restore someone’s faith in humanity.