You are here: Home / Disney / With the Cast and Creators of Disney Pixar’s New Movie, Inside Out
Tweet13
Share1
Pin
14 Shares

Disney Pixar’s newest movie, Inside Out, premieres this Friday, June 19, and I can’t wait to take the family to see it! I was invited to a pre-screening a couple of weeks ago and took my husband, and we both loved it. Almost as much fun for me was attending the press interview a couple of days later. Getting to hear what’s going on in the great minds of those who created the movie and watch the cast do ad libs that were hysterical was such a treat!

The press conference was broken into three sessions, so we really got a wide range of personalities to tell us about Inside Out. It started with the director, Pete Docter and Jonas Rivera, the producer, the minds behind the movie as well as Up and Toy Story, amongst others. Who wouldn’t want to spend five minutes inside their brains?? They’ve each been with Pixar for over 20 years, and their love for creating movies that pull us in and sometimes make us cry comes across in Inside Out, just as the profound story of the elderly man and his newfound friend in Up. 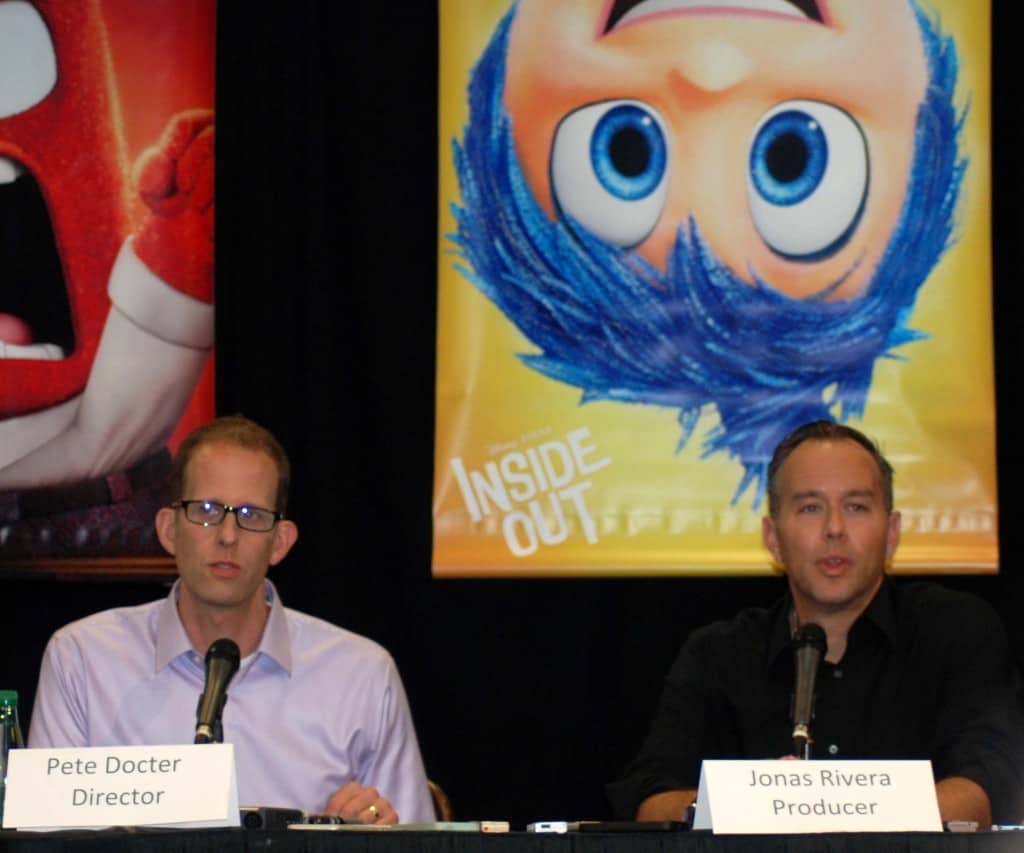 As we do for every screening, we discussed on our way home what we felt the inspiration was, the message, etc., so it’s fun when we get to hear the real reasons. Turns out, Inside Out came about after Pete Docter realized his daughter was going through emotional times and changing, as pre-teens will do. (I have four kids, so I have been through that several times now. This movie explains a lot.) John Lasseter felt it was a great idea but that it could be hard to portray, and Pete was just focused on the fun of it.

Inside Out is about an 11-year-old girl named Riley who moves from the Midwest to San Francisco, a total lifestyle change for her and her parents. It’s a very emotional time for Riley, and both Pete and Jonas have the experience of being a parent to draw from. When asked if Pete and Jonas deliberately start out to make movies as a team, or that make us cry, Jonas had this to say: We don’t sit around consciously going, “All right. Let’s make a great movie.” I mean, we hope that happens, obviously, but I think it’s just like, “What do we wanna see? What did we love seeing when we were kids? What do we wanna take our families to? What are we gonna be proud of? Let’s aim for that.”  When asked if they were planning another film to cover Riley’s ears, Pete immediately replied: “Too scary, can’t go there,” while Jonas quipped it would be a horror film. (As the mom of four, I can totally understand that!)

On screening night, before the movie started, we got to see a new short called Lava. I “lava’d” it just as much as Inside Out! It’s a seven-minute animated movie about a lonely volcanic island with a beautiful singing voice, happy to see others together but wishing for a love of his own. Creator/Director and singer, Jim Murphy then spoke, with Andrea Warren, the producer, sharing their journey from the idea of Lava to the big screen. . 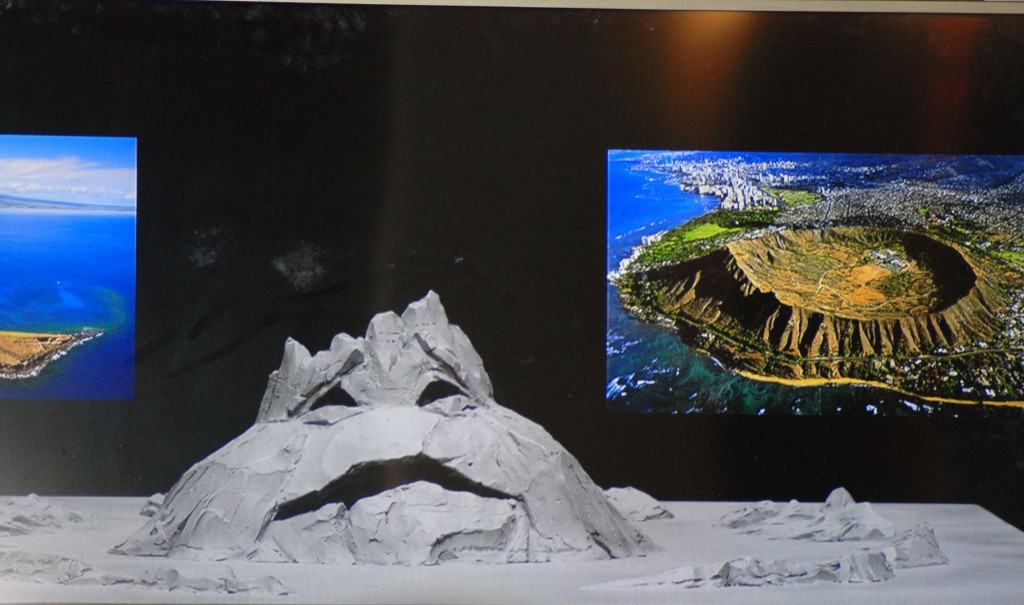 Jim was so engaging to listen to. Via a slideshow, he explained how he’d taken a honeymoon with his wife years ago to Hawaii, which ignited a passion towards Hawaiian music and culminated with the purchase of a ukulele. Pitching the movie was successful but he went through some growing pains in getting the story fine-tuned, and the slides of the animation process were so interesting! I’ve never been privy to the inner workings of this amazing transformation from an idea to a living thing on-screen, so I thoroughly enjoyed listening Jim share the experience. Below are some photos and the best part of his interview, a video of him singing the theme song from Lava on that same ukulele he purchased in Hawaii.

Then there’s the cast of Inside Out. Perfectly chosen, each one portrays their emotion in just the way you’d imagine.

It’s important to add that while this was a regular press interview, when you’ve got comedians and Saturday Night Live cast members together, they’re going to ad lib. The hilarity ensued, as we all laughed and enjoyed the back and forth between them all. Each one so different, you never knew where the conversation was going to go next.

Choosing each actor is always a critical part of making any film and each actor shared how it all started for them. Lewis Black shared that when he received the phone call about the movie, he said that when they talked about him being the voice of Anger, he said “Oh, that’s a stretch.” (Insert laughter here, and that was just the beginning.) Phyllis Black, who you’ll remember from the office, has a voice that suits Sadness perfectly, but she doesn’t have that vibe about her otherwise. If you know Bill Hader’s comedy and have seen him on any interview, his responses will come as no surprise to you. He’s off-the-cuff and pretty open, and it has everyone laughing. He shared that he “stalked” Pixar for the role, and asked for a tour of the studios back in 2010. Jonas and Pete then visited him at SNL for a week, ending with them offering him the role of Fear. (Fear may be my favorite, other than Sadness. That’s not necessarily saying anything about me personally, but each of them had such funny lines!) 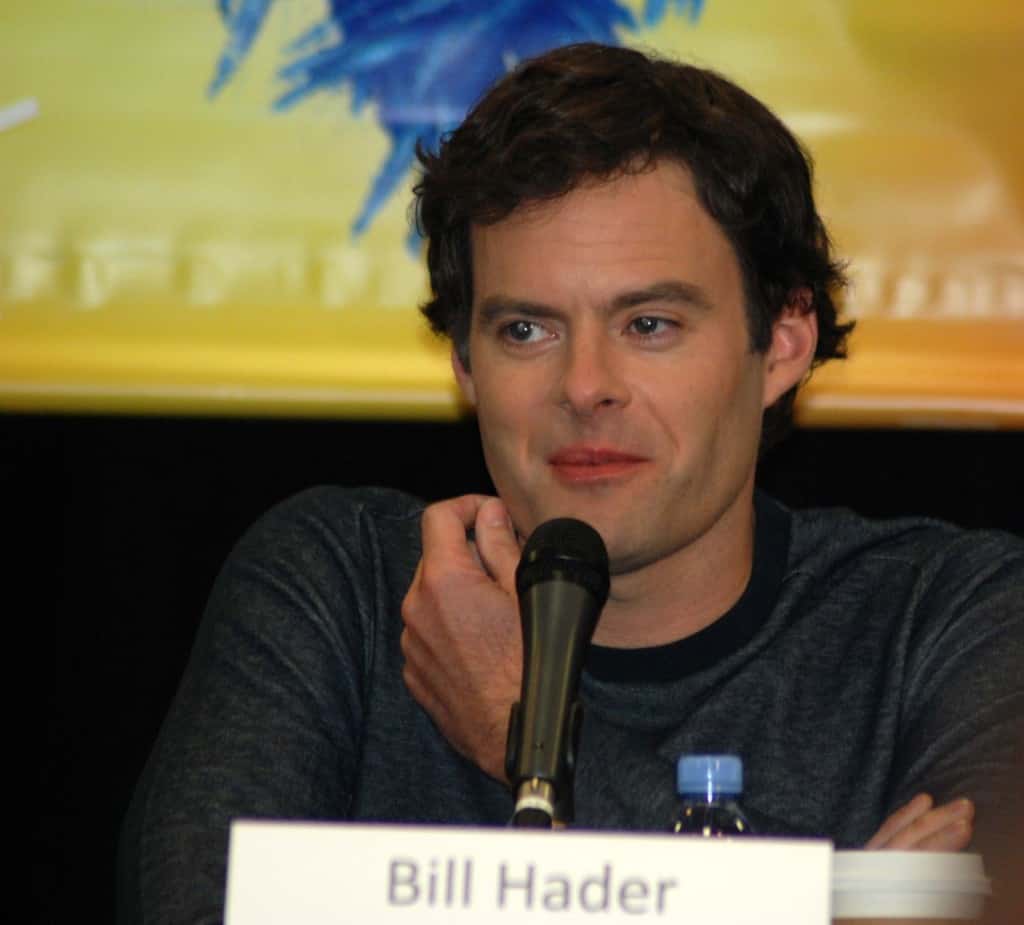 Amy Poehler came in later in the process and was fascinated with the idea of a movie played out inside the mind of an 11-year-old girl. 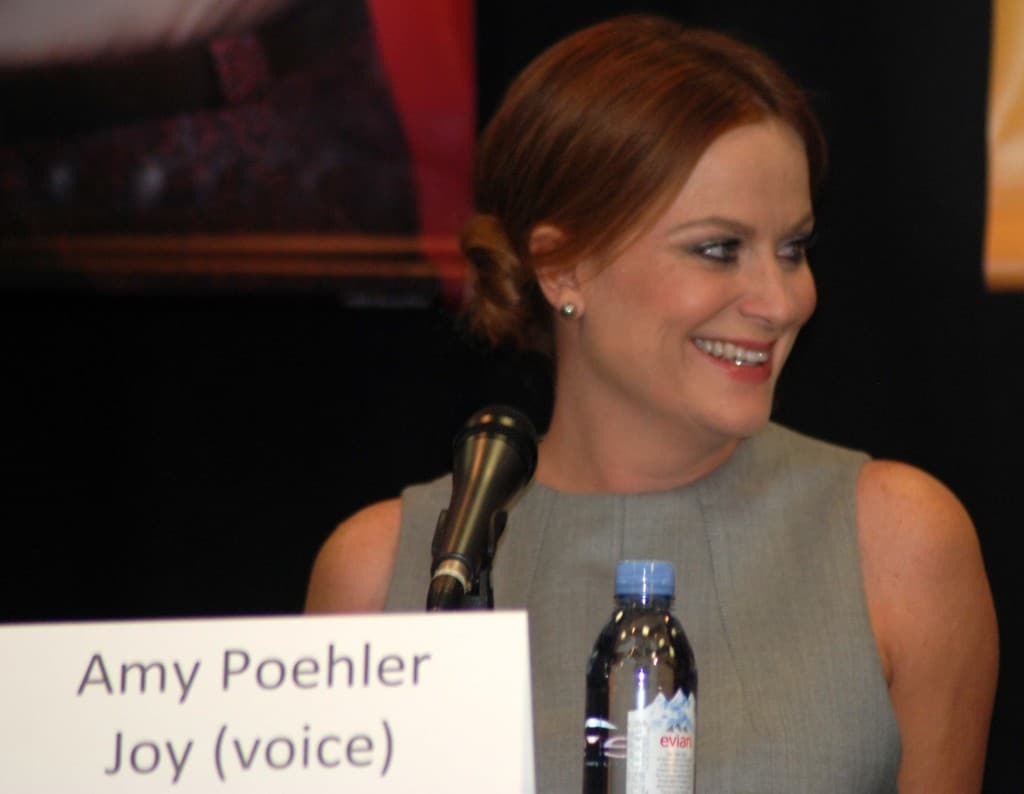 That question played into the next one, how did each of them identify with the emotion they voice. Mindy’s response was open and probably something any female could say; in short, been there, done that. “Sure, I think that there’s a – the character discussed has a lot of qualities of a very impatient, judgmental adolescent girl and because I seem to be recurring in playing that role over and over again in my career – she just says the things I say on a really bad day – the thing I really wanna say but then don’t say it.” How fun would that be?? 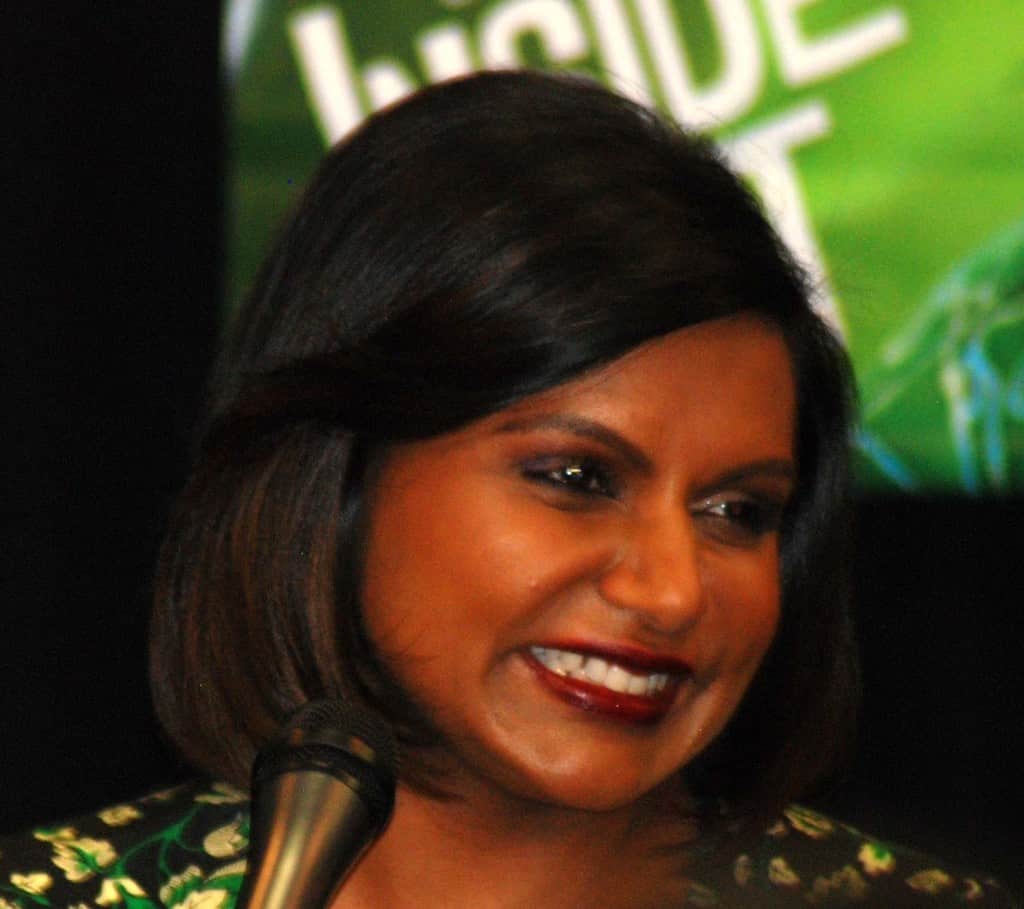 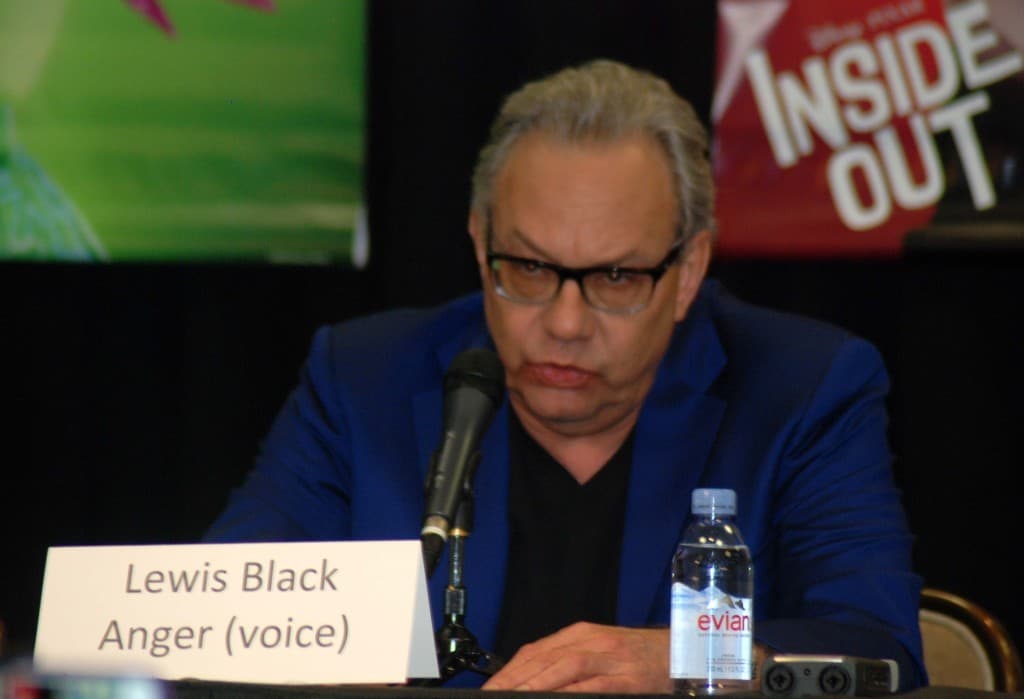 Lewis Black, as you’d expect, is very dry and sarcastic but so loveable regardless. Each response was witty and pointed, even joking that it was easy for him to play anger because he grew up in a family that showed love by arguing…and with a mom who can’t cook. Hilarious! Bill Hader made it easy, “I’m a big wimp,” along with Phyllis, “Likewise I’m just a mess and I’m a real sad sack.” 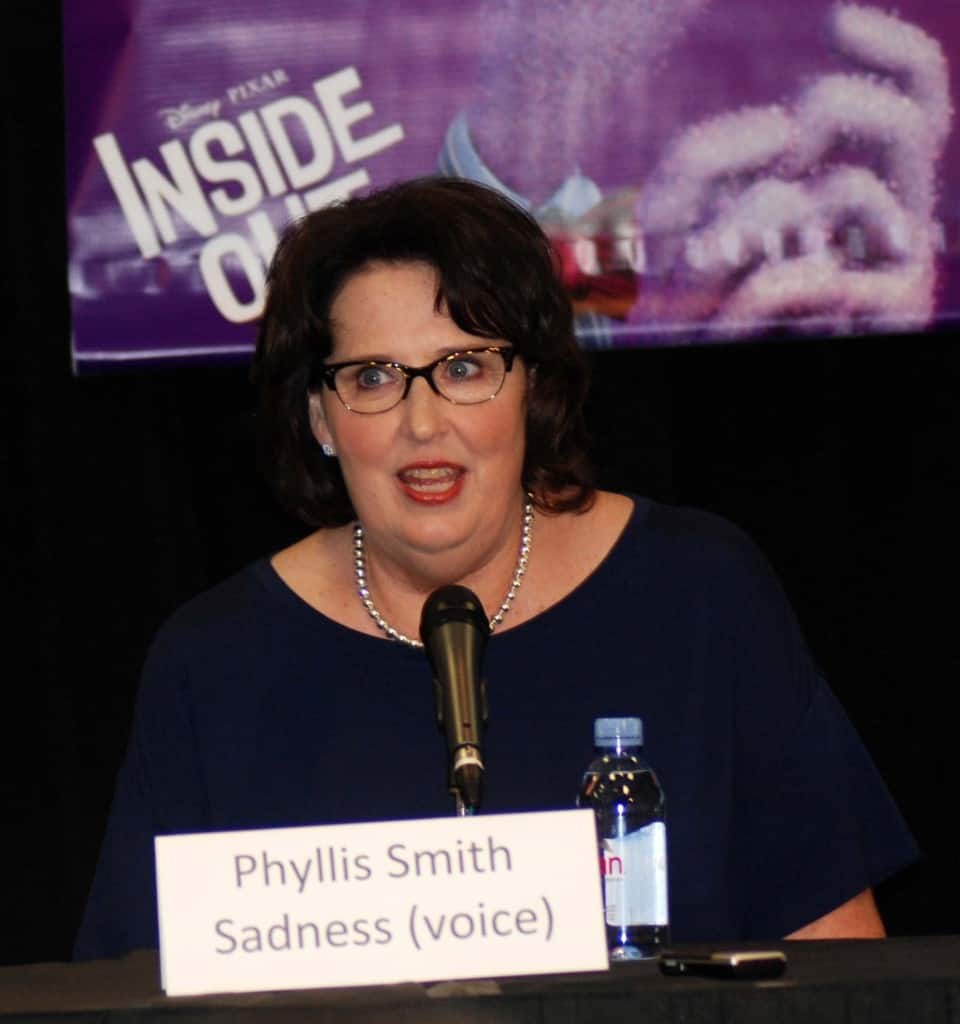 One of my favorite responses, aside from the funny ad libs that went totally off-topic, was something Amy said. I’m so glad I have a transcript available to refer to, as I wanted to be sure I could say it exactly as she did.

“Yes, Pixar doesn’t patronize their young audience and they don’t underestimate the intelligence of their audience every time so they keep raising the bar and also they assume that you and your big brain is gonna show up and your big heart.”

It doesn’t get any better than that, right? Every Pixar film moves you in some way that you don’t expect, and Inside Out is no different. The concept of the inner workings and design of a human brain and emotions was nothing short of genius. I won’t give it away but let’s just say that the next time a jingle of a commercial or radio ad gets stuck in your brain, you’ll totally understand!

It’s easy to look at comedic roles and get the comedy, but Inside Out goes way beyond that. Hearing Amy Poehler and Bill Hader discuss a pivotal moment in the movie — all I’ll say is Bing-Bong — exemplifies why Amy was the ideal choice to voice Joy. She gives an eloquent interview and she and Bill clearly have a strong relationship that goes beyond the movie.

The many faces of Bill Hader

The cast was a feisty bunch, readily answering every question thrown their way and spicing it up a bit. It’s easy to see why they successfully worked together, with the director and producer, to develop a movie that will work its way into your heart and become another Disney Pixar classic. I can’t wait to take the whole family to see it!