You are here: Home / Fitness / Thanks to BodyArmor, We Got to Meet Mike Trout! Son’s Day Made.
Tweet
Share4
Pin
4 Shares

If you’re a regular reader of my blog, or if you’ve bounced around reading here at all, you’ll see that I write a lot about how my son plays football. This year, not only does he play but he’s an assistant coach on a local team for younger boys. He loves it and he’s learning a lot. Here in SoCal, it’s been one blazing hot summer so it’s even more important to stay hydrated. We keep BodyArmor on hand so when he’s sweating from a practice or scrimmage, he will keep drinking enough to stay healthy. Sometimes kids don’t like to keep drinking water, but other drinks are often full of sugar, dyes or other artificial ingredients. BodyArmor has none of the bad stuff, helps hydrate an athlete properly and tastes good. I even like to drink it after a workout. 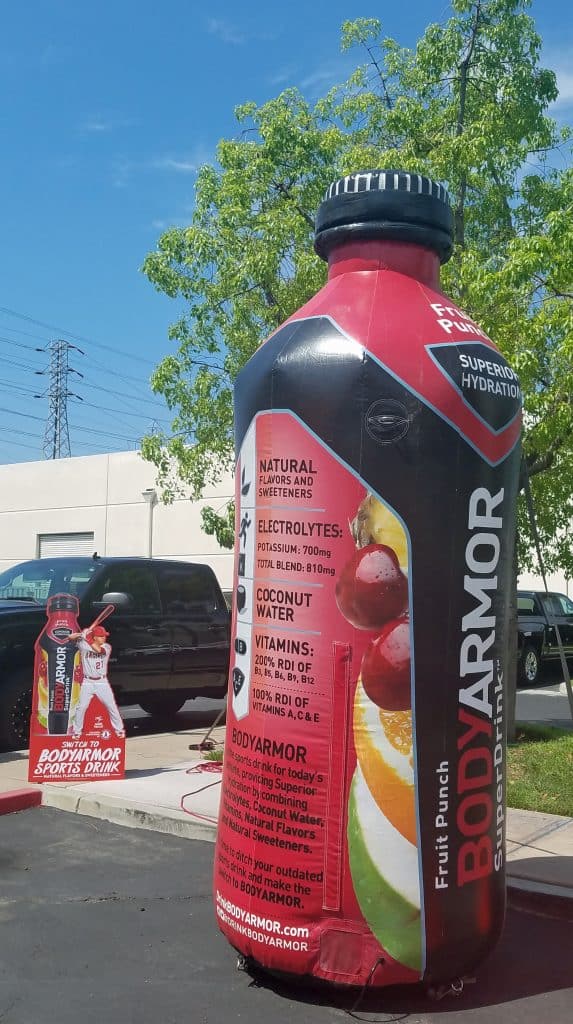 We first got introduced to BodyArmor last summer, when we were invited to an event to interview and meet Mike Trout, hosted by BodyArmor. We couldn’t attend, so when we got another invitation a few weeks ago, I cleared my schedule to attend. (I had to rearrange some things, as I was leaving early the next morning to head to a social media conference, but I wasn’t going to miss it again.) As much as my son loves football, he is also a baseball fan who is well-aware of how amazing Mike Trout is. The opportunity to meet a sports idol is something that doesn’t come along every day. 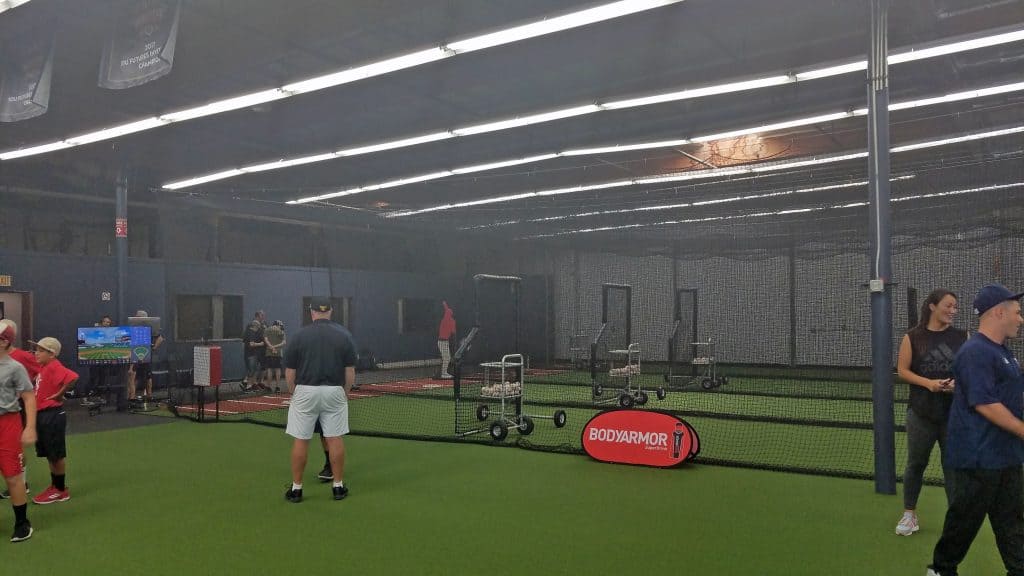 The event was held at a baseball training facility down in Anaheim. The kids were treated to some baseball training — pitching and hitting practice — while the adults participated in a workout led by professional personal celebrity trainer, Don-A-Matrix. We headed down in our workout gear, seemingly ready for a light workout. Ha. 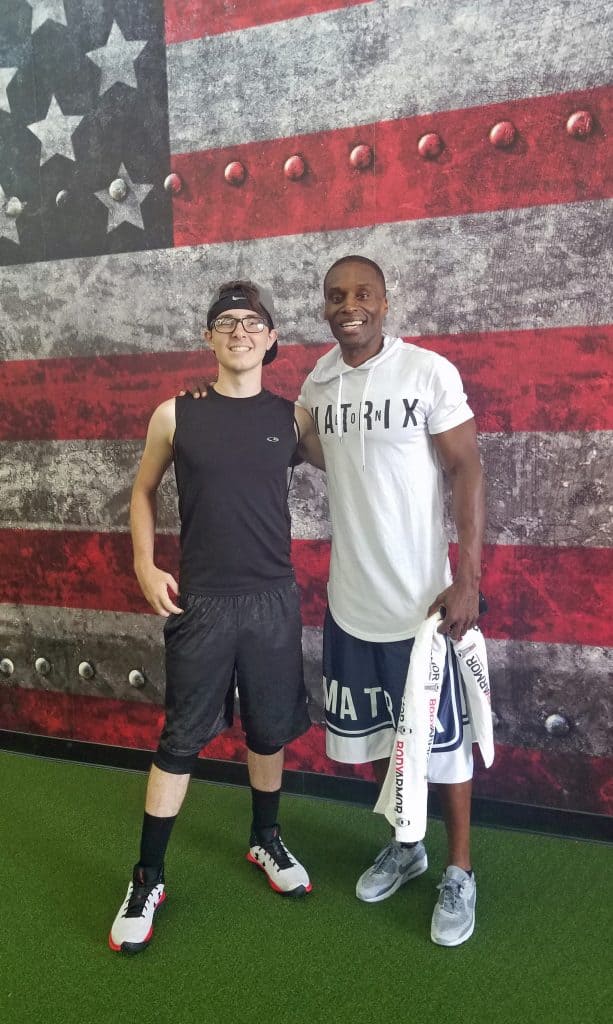 My son decided he wanted to do the workout with the adults. At 16, he was one of the older kids in attendance and he was excited to have a real professional workout. After an intro by BodyArmor and Angels staff, we were briefed on the workout. Four quarters of varying intensities and a lot of yeah, yeah, we got this…except wow, Don-A-Matrix’s workout is not a light one. 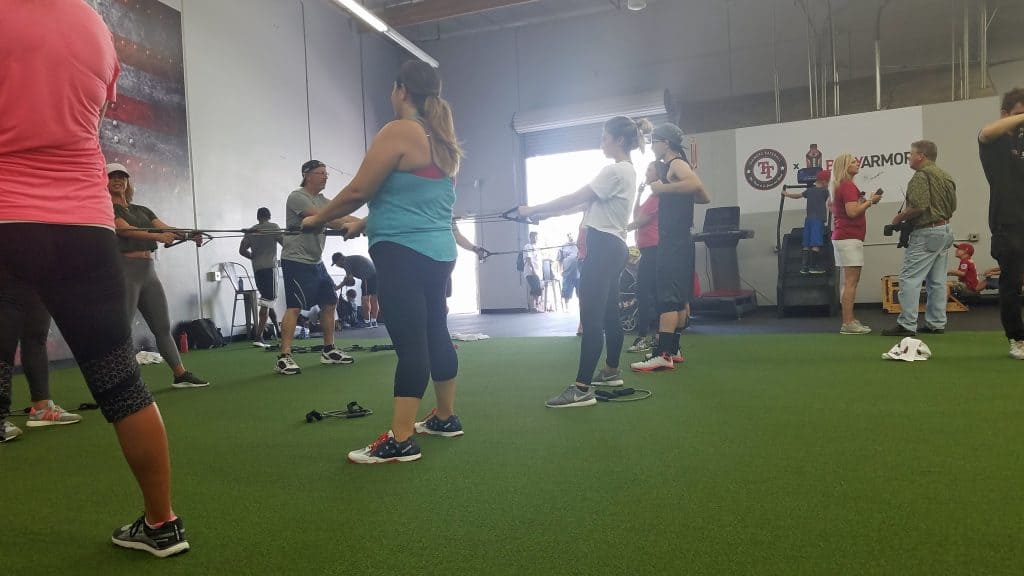 It put us to the test, but all in a good way. Using bands and our own body weight as resistance, in addition to floor exercises, we sweated and pushed ourselves to complete the entire workout.

This FOX Sports West video clip of the event features a lovely shot of us working out. I won’t point out which one I am, but it’s not hard to tell. I’m the uncoordinated sweaty one in the front row…

https://twitter.com/FoxSportsWest/status/893293902345547776
Confession: I sat out almost 1/4 of the workout. I was convinced I was going to throw up, and Don assured me I wouldn’t be the first. His motivation to continue and complete the workout was perhaps my favorite part of the entire fitness routine. He didn’t give me a guilt trip when I didn’t finish, yet made me want to get back out on the floor…which I did. And it felt fantastic! I was sore the next day but just enough for me to realize I need to do more of that! 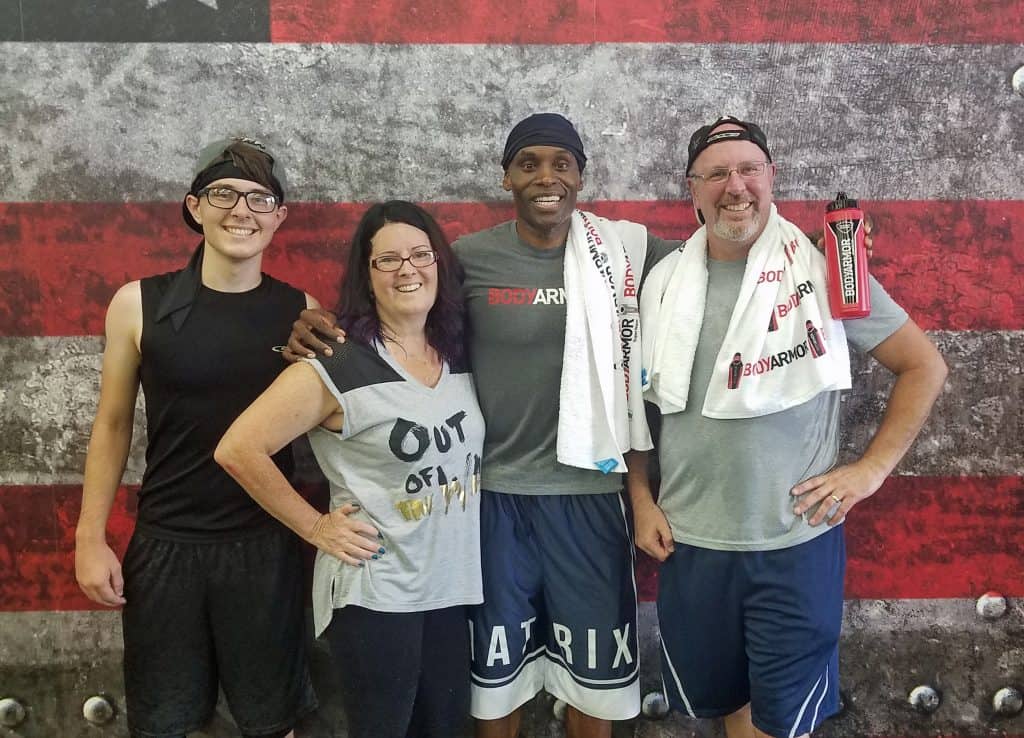 Next up was the meet-and-greet with Mike Trout. The kids all listened intently during the Q & A session, and some of those kids are destined to work in journalism. Such great questions! After the interview session was completed, all the kids and families lined up for an individual photo opp and autograph session with Mike. He was so gracious even though he was supposed to be over at the stadium by then for practice. 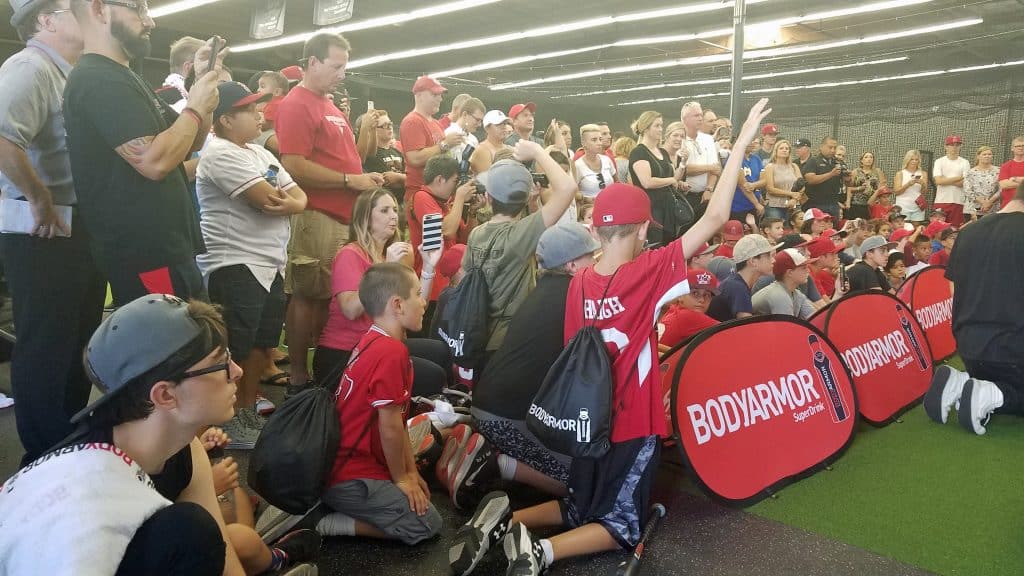 So many young baseball fans were in attendance, ready to meet an idol and learn about how he began his career in baseball. Getting to meet Mike Trout is going to be quite a memory for everyone! 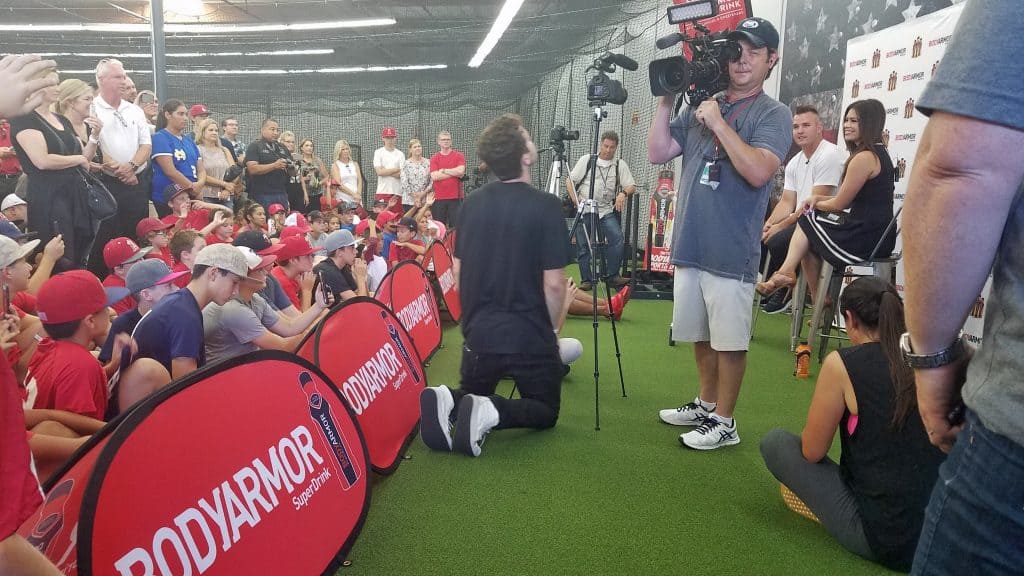 The smile on my son’s face! (The on-site photographer took this photo, so I can’t take credit for it!) 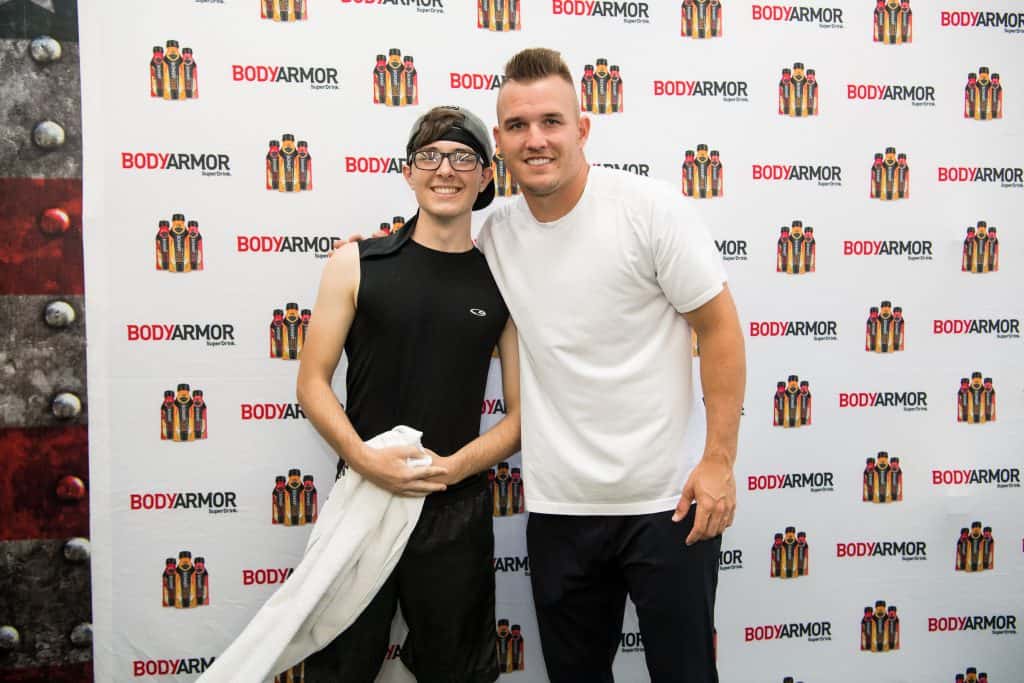 To see him smile so many times in one day! (This is also from the on-site photographer.) 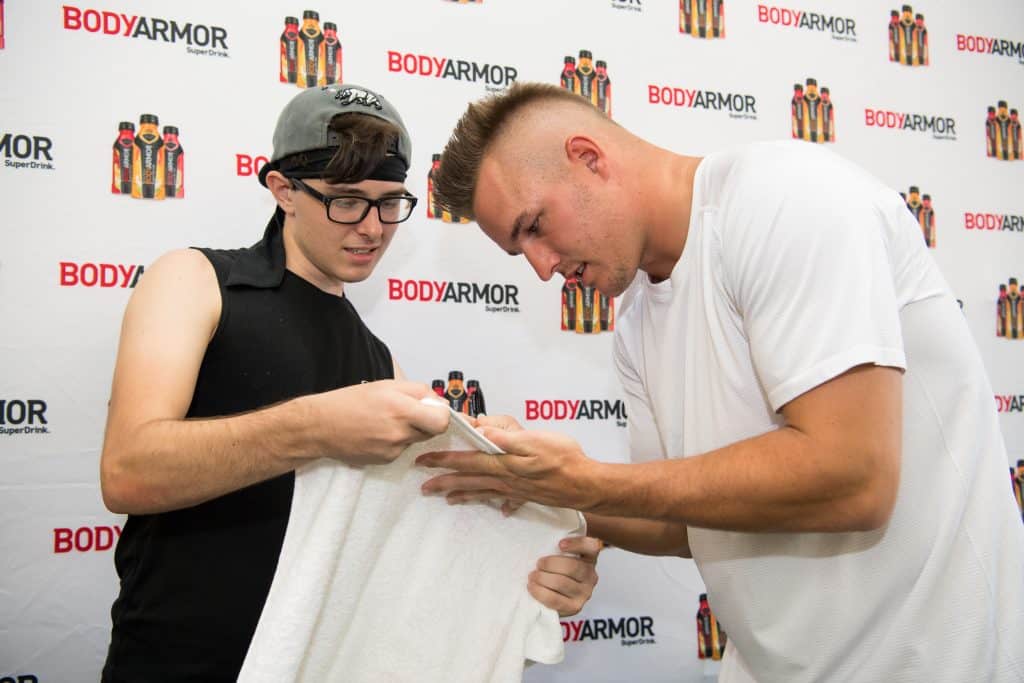 My son wants to be an athlete. It’s all he wants right now, to earn an athletic scholarship to college and then play on a major league team. He’s got excellent grades, does the volunteer work and I really think he can do it. This quote below is one of his mantras, so we had to take a photo of him with it. 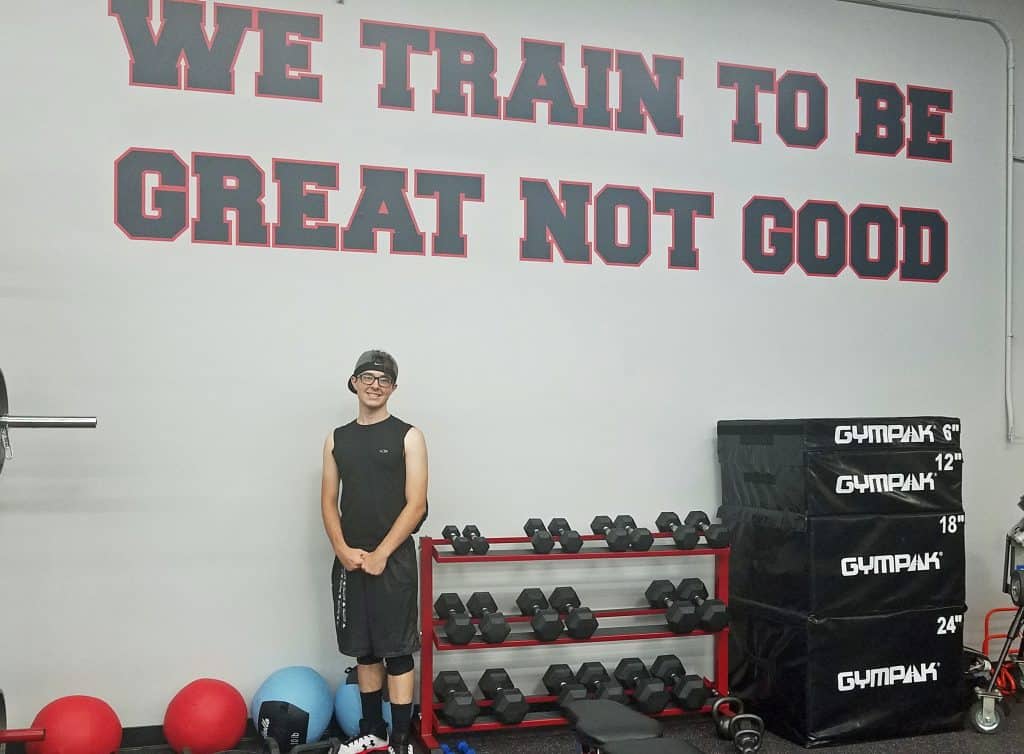 Thank you, BodyArmor, Don-A-Matrix Training, the Angels and Mike Trout, for a wonderful day!