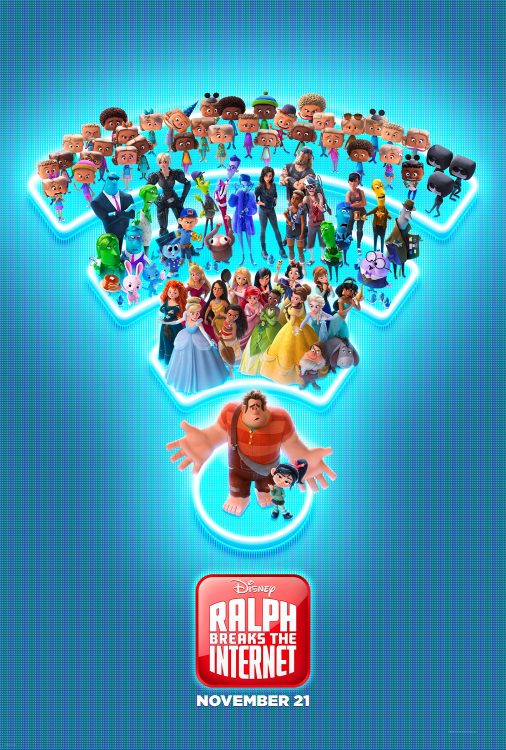 I get to see the movie next week and I can’t wait! The husband is going with me to the studios for the pre-screening, and the son is bugging me about why dad gets to go instead of him. (“Remember, YOU saw Incredibles 2, not him?” Oh yeah, Mom…<makes pouty face regardless.>”) I know I’m going to love it as much as the first in the series, if not more!

Have you seen Wreck-It Ralph? If not, there is still time! Ralph Breaks the Internet picks up where the first one left off, and there is so much good about this movie, I can’t even begin to hit upon much, but here are a few fun facts about it!

Ralph is the bad boy of the arcade, and he forms an unlikely friendship with Vanellope, but when her game breaks, Mr. Litwak considers scrapping her game entirely rather than repairing it. Obviously, this won’t work for Vanellope, and Ralph steps in to help ensure his friend has a home. Enter some new characters and the wonderful world of the web — good, bad and dark — and you’ve got another adventure that will either make or break their friendship and Vanellope’s future. I won’t tell you how it plays out, as I don’t even know yet, but I know we’re in for one amazing ride!

“Ralph and Vanellope are imperfect characters,” says Academy Award®-winning director Rich Moore, who directed the original film. “But we love them because of their flaws. Their friendship is so genuine—the chemistry between them so engaging—that I think we were all anxious to know more about these characters.”

One of the biggest things I learned on early press day back in August was how much work goes into just one scene of an animated movie. Here’s an idea of what I mean — a series of images depicting just one frame of Ralph Breaks the Internet, from inception to finalization.

RALPH BREAKS THE INTERNET: STORY – Storyboard artists at Walt Disney Animation Studios work closely with the director, heads of story and screenwriters to transform words on a script page into a visual representation—for example in this scene that showcases Ralph and Vanellope’s arrival to the internet. Storyboards are edited together with scratch or temporary dialogue, providing filmmakers with an early idea of how a scene might play out. Directed by Rich Moore and Phil Johnston, and featuring Jim Reardon as story director and Josie Trinidad as head of story, “Ralph Breaks the Internet” and opens in U.S. theaters on Nov. 21, 2018. ©2018 Disney. All Rights Reserved. 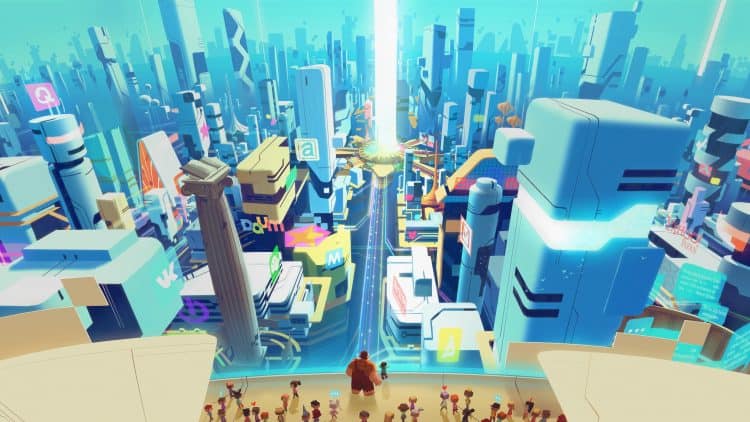 Ralph Breaks the Internet: VISUAL DEVELOPMENT – Visual development artists, often referred to as “vis dev” artists, are responsible for early visual exploration for what a film’s characters and environments might look like on screen. They gather input from directors, the production designer and other key players in the production to create detailed images that relay the mood, tone and color an animated scene might convey. Vis dev artists work in various media, ranging from traditional paper and pencil to digital paint programs, to create art to inform and inspire the final look of the film. Featuring Cory Loftis as production designer, and Ami Thompson and Matthias Lechner as art director of characters and environments, respectively, “Ralph Breaks the Internet” opens in U.S. theaters on Nov. 21, 2018. ©Disney. All Rights Reserved.

Ralph Breaks the Internet: TECHNICAL ANIMATION – The technical animation team is responsible for fine-tuning the animation and simulation in a scene when most elements of the scene are in place. Hair and cloth are physically simulated and add believability to the performance of an animated character—that’s where “tech anim” comes in. Dave Komorowski is the head of characters and technical animation for “Ralph Breaks the Internet,” which opens in U.S. theaters on Nov. 21, 2018. ©2018 Disney. All Rights Reserved.

Ralph Breaks the Internet: LIGHTING – Lighting is among the final stages of shot production in animation, though the lighting department is integral to the look of the film as production gets underway. Lighting artists can place individual lights within a scene, but for a scene as big as the one in which Ralph and Vanellope visit the internet for the first time, technology is utilized to place multiples of similar lights—like those on a building, for example—creating a more efficient process for dealing with a massive and diverse number of light sources. Brian Leach is the director of cinematography, lighting for “Ralph Breaks the Internet,” which opens in U.S. theaters on Nov. 21, 2018. ©2018 Disney. All Rights Reserved.

See what I mean? The years of work that goes into an animated movie, particularly one with so many nuances and varied backgrounds, require hundreds of people, man hours and teams that work in sequence to finish their parts before passing it onto the next team. Scenes go before the team for approval, then they move onto the next step. It’s so much more than you’d expect!

As a Disney animated movie, many people will expect it to be a kids’ movie, but don’t let that stop you from seeing it as it’s something that will translate to viewers of all ages. There is emotion that we can all relate to, even if we don’t realize it, and I think we all value relationships that are as tight as Ralph’s and Vanellope’s.

“While ‘Ralph Breaks the Internet’ will make people laugh, I think some of the emotional struggles that Ralph and Vanellope go through in this movie are pretty intense and complicated,” continues Johnston. “We’re exploring the reality of all relationships, which come with ups and downs. Friendships are tested from time to time, and Ralph and Vanellope have to navigate the complexity of theirs—while attempting to navigate the vast and often intimidating internet.”

I know you will laugh, and you will also get some deeper feelings. You will come away loving the entire cast, and one particular Disney princess scene is a show-stealer. Grab the popcorn, your beverage and sit down for the duration, you won’t want to miss any of the movie!