You are here: Home / Entertainment / Our Visit to Voyage to the Iron Reef at Knott’s!
Tweet16
Share2
Pin
18 Shares

My “baby” is 14. He’s becoming more independent daily, and wanting to hang out more with his friends or on the basketball court than he does with his family. It stinks, but it’s normal. I live for days where he wants to spend time with us, so I was so excited when we were able to plan a day at Knott’s Berry Farm to celebrate the opening of Voyage to the Iron Reef, the new 4-D ride where we get to save the park from the Kraken.

If you’ve been to Knott’s, you know they are an affordable amusement park with activities for everyone in the family. Camp Snoopy for the younger ones all the way to fast rides for the brave. Food and entertainment galore, and the tastes of boysenberry park-wide. (I still favor the boysenberry-topped funnel cake and the boysenberry latte in the coffee shop over by Voyage to the Iron Reef, a secret being that it is Starbucks coffee!) It’s a great tourist destination and a favorite of locals alike. And then there’s Snoopy, who wanders the park. Don’t forget to get your picture taken with him! 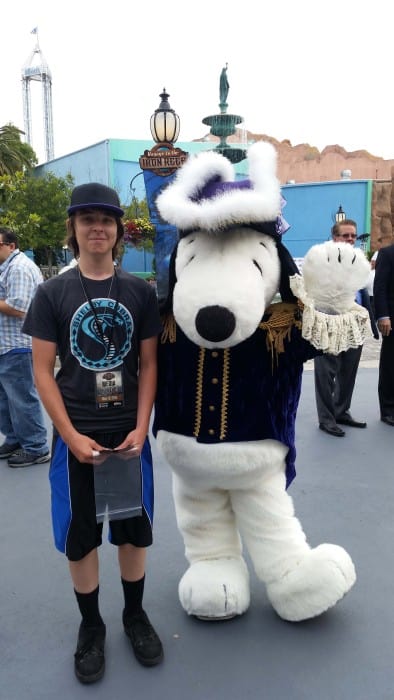 This past week, we were invited to the media event for the opening of Voyage to the Iron Reef. As usual, Knott’s knows how to party. We were greeted with a huge breakfast buffet, complete with this awesome ice sculpture, and a grand opening ceremony attended by media as well as Raffi Kaprelyan, the Vice President and General Manager of Knotts and Bob Gurr, infamous ride creator for Disney, Universal and now Knott’s Berry Farm. Then on to the ride! 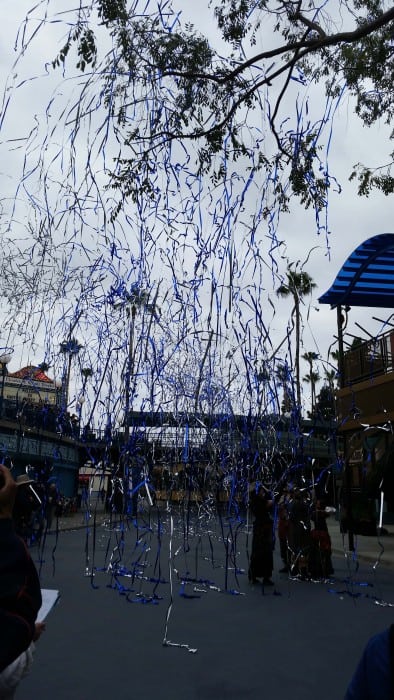 Amazingly enough, Little Dude and I got lucky and were in the first car on the ride once it opened for media. How cool is that?? On this 4-D ride, we’re fighting the Kraken to save the park. The ride takes us under the sea, where sea creatures attack and we have to pull out our weapons to save ourselves from the Queen Kraken and her aquatic army. We feel the air on our faces, go through streams of water and bubbles and shoot the creatures as fast as we can, with our scores visible throughout the ride so you know if you’re being badly beaten by your son…as I was. 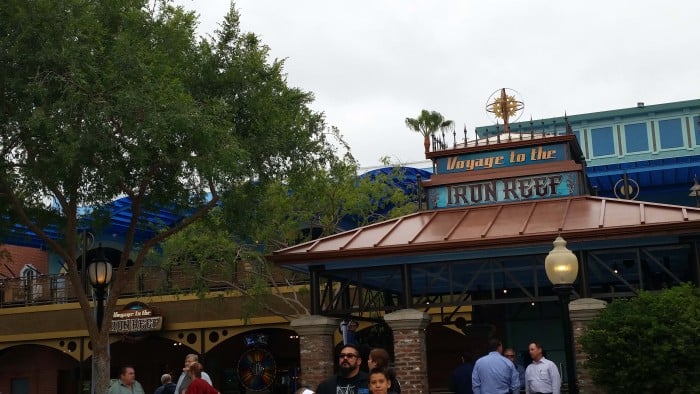 The ride is a first for Knott’s. It was created using network cabling 85 times the length of the Hollywood sign and using 44 high-definition projectors. To help you aim better as you protect your car from the monsters, each gun’s ray is a different color, and the color is shown by your score screen at your seat so you easily know which color you are. The ride is built in the same building that Knott’s Beary Tales attraction once appeared, and the queue to get in snakes along the rightside of the arcade. When you exit, you go through a new gift shop themed around Voyage to the Iron Reef. 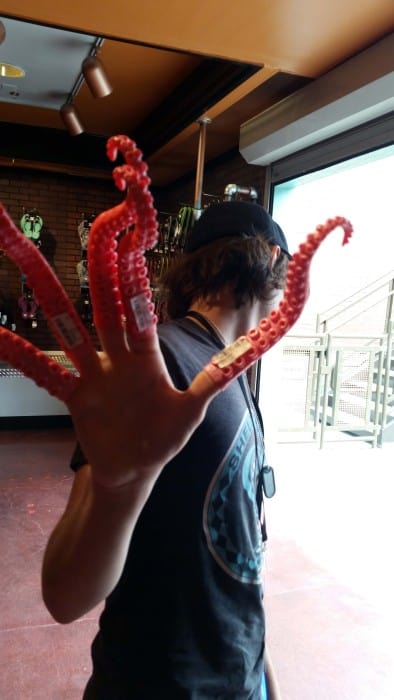 Everyone needs a set of those Kraken tentacles!!

From there, you can easily get into the arcade. Which we did, where we played a couple of rousing games of air hockey — which is how I took a puck to the face and now cannot touch the left side of my chin. (We’re going out tonight and I have no idea how I’m going to cover up the ginormous bruise!) 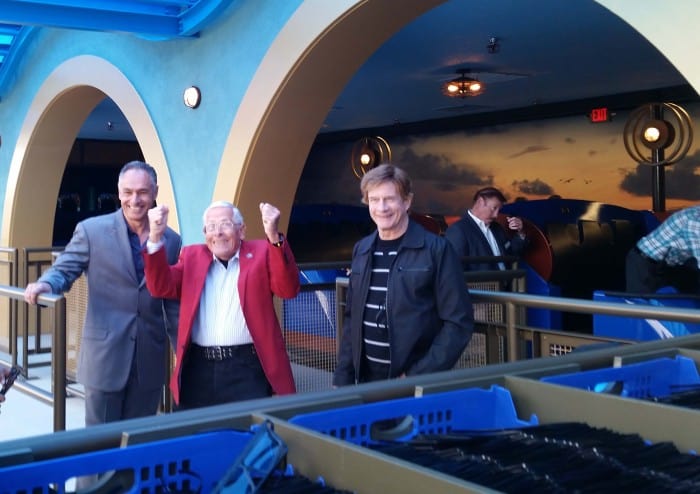 Bob Gurr posed for photos with several of the Knott’s cast members in costume. I had Little Dude take a photo and they were so nice to him! One lady noticed his “big guns” and Bob Gurr asked to see a photo my son had taken. It made his day to speak to Mr. Gurr and have the opportunity to interact; meanwhile, I was so impressed that no one rushed along a young adult interested in the ride. Our kids are the future and they need to be taken seriously — Knott’s, kudos!! (And Bob Gurr had a Tomorrowland pin on — I got one last week at the press junket and it was fun seeing another one!) 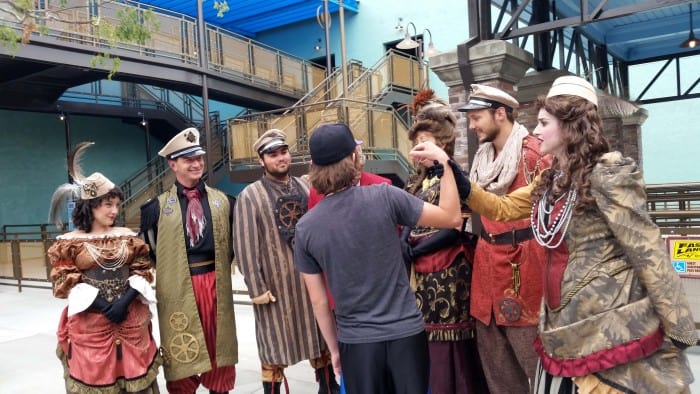 We had so much fun at Knott’s. Not only did we go back and ride Voyage to the Iron Reef two more times, but we also had a little while to visit the Boardwalk rides before they were open to the public. This meant that we had to ride in the front seat of the Xcelerator, our favorite ride. Because there were no lines at all, we did it twice in a row. I got off and Little Dude rode three more times! 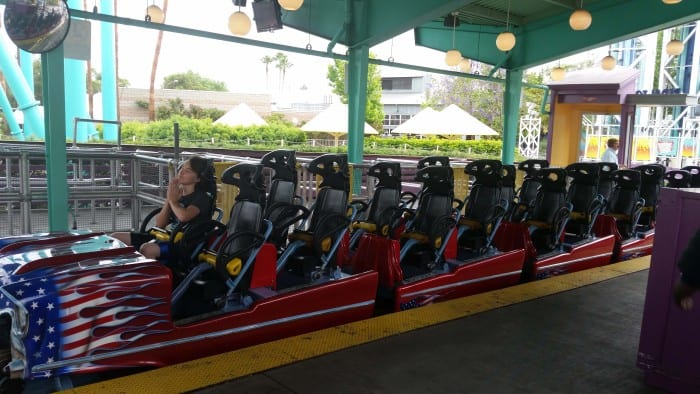 We also ran into Raffi later and my son got to be the interviewer. Raffi was very kind and didn’t rush my son along at all. I feel lucky to have a son interested in being part of the media and who comes up with such great questions about the park! 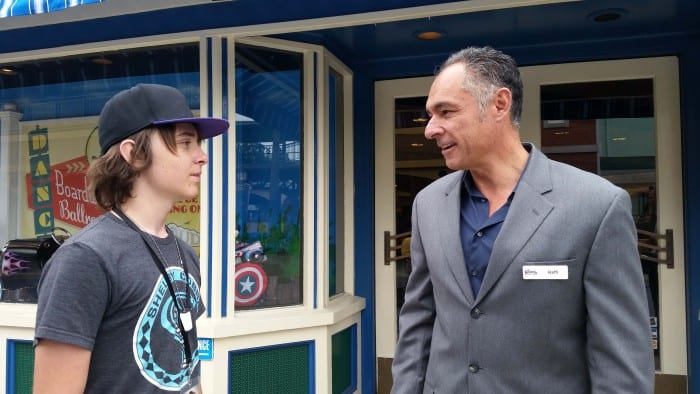 We then headed out to other rides and I thoroughly enjoyed our uninterrupted time together. Having a big family is something I would never trade for the world, but one-on-one time with my son, who couldn’t attend amusement parks while he was younger due to his autism, is priceless. Don’t tell him I said anything, as he may not want to admit it, but he even leaned into me and put his arm around me a few times! Sniff.

Thank you, Knott’s Berry Farm, for the opportunity to attend and try the new ride. I can’t wait to bring the family back to see it. The 4-D experience is a must-try and is perfect for small kids all the way to adults. It’s not scary, it’s not fast and the weapons are easy to operate. And the pictures you get at the end of the ride are a blast to see — I don’t know when they were taken during the ride but wow, we look so serious! 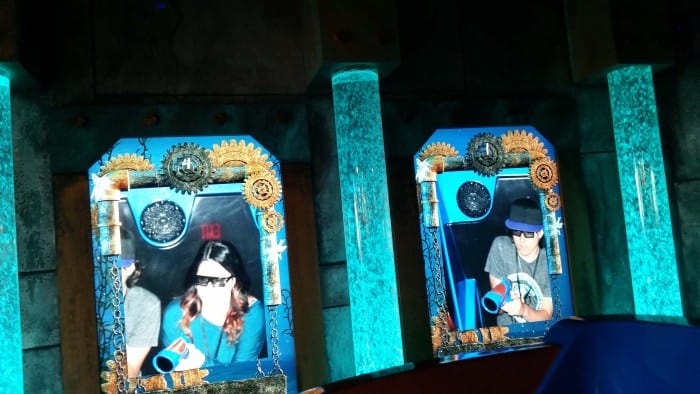