You are here: Home / Marvel / My Afternoon With the Cast of Guardians of the Galaxy Vol. 2
Tweet
Share
Pin
0 Shares

A couple of weeks ago, I got to sit down in a fancy Beverly Hills hotel and participate in an interview with the cast of Guardians of the Galaxy Vol. 2. With so many people involved, it was broken into two sessions. I don’t know which one I was more excited about. In my head, I kept thinking Pratt, Pratt, Pratt…but Sylvester Stallone! Kurt Russell! Michael Rooker! The list is a long one… 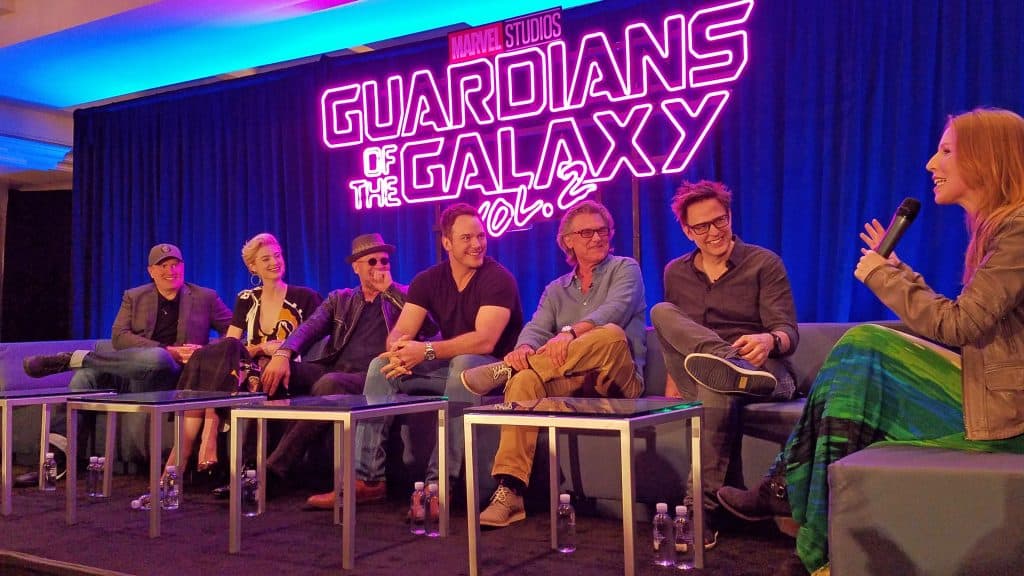 What immediately struck me when the first set of cast members sat down was how happy they all looked. The premiere itself was the night before, so it had likely been a late night but you wouldn’t have known it based on their demeanor. Smiling, a lot of interaction and James Gunn, wow, I love you and your infectious laugh. I want to hang out and be your friend. You made one heck of a movie with Producer Kevin Feige. You won us all over when you shared your affinity with Rocket, feeling like you don’t belong. You belong in Hollywood, that’s for sure. 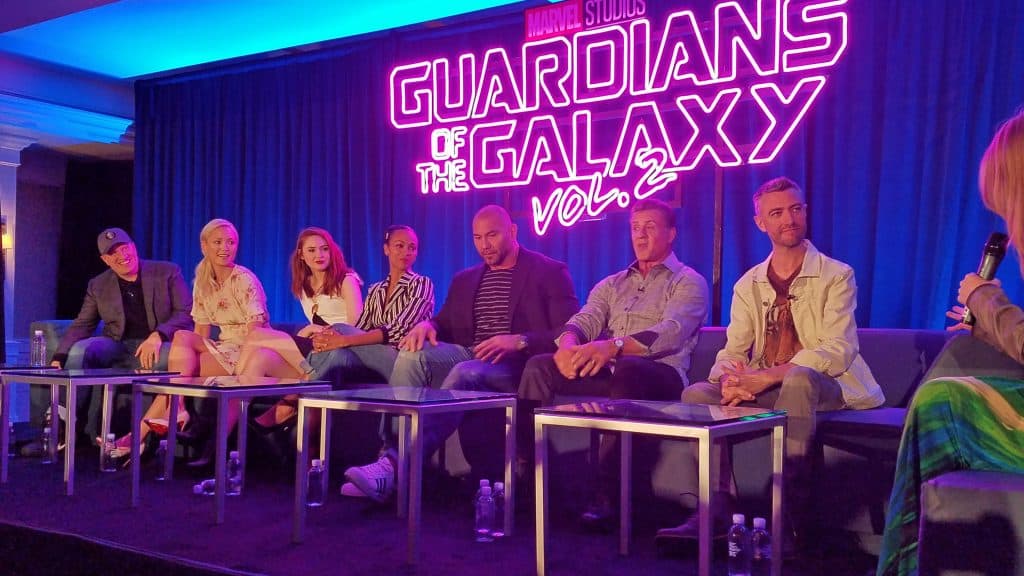 Moderated by Kara Warner from People Magazine, the first question was directed at Elizabeth regarding her new role as Ayesha. She really had a trial by fire, as the first scene she shot was upon a throne, wearing very heavy clothing, looking down on all the Guardians. They hadn’t even officially met each other before she spent two hours filming a scene that was rather intimidating in the movie, yet she was the one intimidated a bit due to being new. (You may recognize her from The Night Manager with Tom Hiddleston, so she was already close to Marvel by association.) 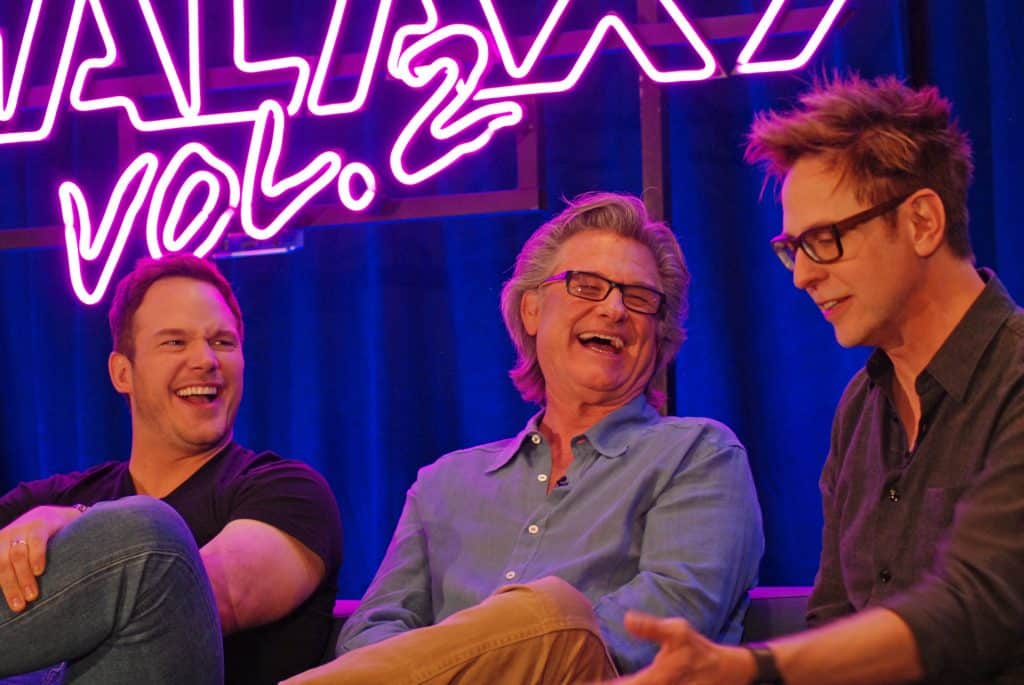 So much laughter! If you’ve seen any of Chris Pratt’s social media profiles, you know he’s not bashful in sharing his humor. These guys were constantly laughing, and in turn, so were we.

Kurt Russell was also new to the Marvel Universe, with his role of Ego. If you’re familiar with the comics, you probably know who and what he is. When James asked him to consider the role, Kurt hadn’t yet seen the first Guardians of the Galaxy, yet he felt pressure to ensure everyone like the second movie. Once you see it, you’ll know he can rest easy, that is not a concern. At all. More on the movie in my post coming on Friday. Chris shared how he felt a bit in awe to be in the presence of Kurt initially, how he didn’t want to geek out so he tried to play it cool, but that seemed inauthentic. Judging on this next photo, that doesn’t look like it was a problem for long. He mentioned only being as good as his last at-bat, and if that’s the case, he’s got a high bar with one fantastic portrayal after another. 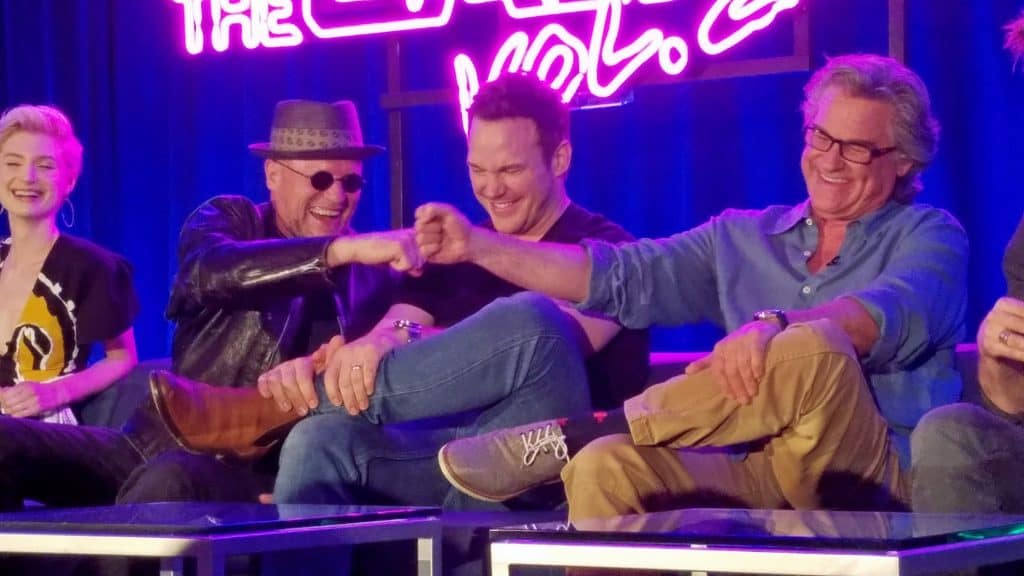 That’s one of my most favorite shots of the whole day. What a fun job it must be to work with this crew!

An interesting perspective came from James Gunn, who of course was focused on making another hit movie in the series. He wanted the characters to grow and change but he wanted to let his imagination run a bit so Groot and other characters could just go where they wanted to go. In the end, he didn’t want a repeat of the first movie and he wanted to give us something new and different. I think he most definitely succeeded. He mentioned that Kevin gave him complete control to do what he wanted while being true to the artistic vision and true to the characters themselves. We owe him for the hilarious “Mary Poppins” line.

There was some banter about Peter Quill’s shirt coming off a little longer than in the first movie. No one seems to mind, based on the sound in the theater when it happens, but Michael Rooker joked that it was his request. He also has a shirtless scene, and he told us the story of how he spent months working out in order to look good in that scene; it was only after that he realized that perhaps it would have been more fitting if Yondu’s body was less in shape. That scene was very telling, as explored in the interview, in that it’s a brief peek into all that is Yondu, a character who takes your emotions on a ride. 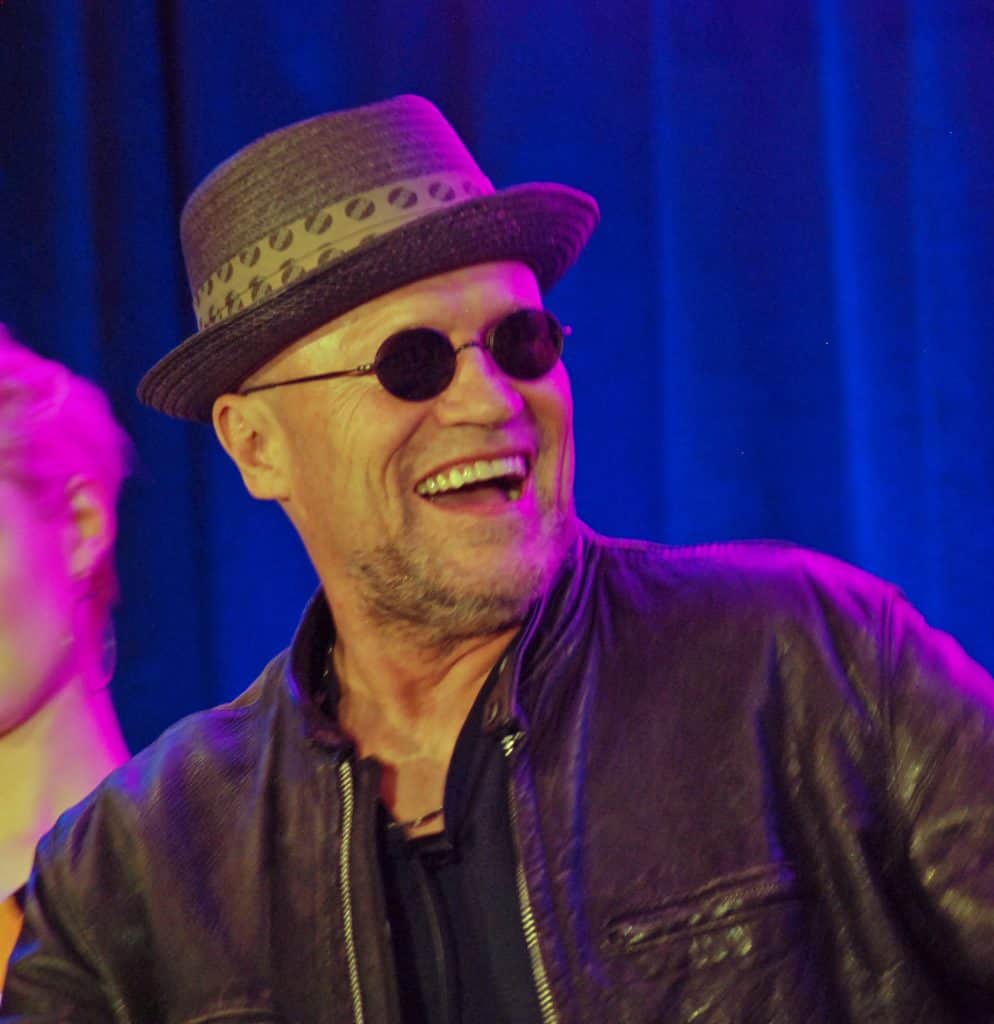 Without giving anything away, there are a few scenes in the movie that could pose challenging to a make-up artist, beyond the spectacular work done on everyone that’s in full costume all the time. One of them in particular is Ego. When you have to go back in time, you can go CGI or you can do it with make-up. Dennis Liddiard, Kurt’s makeup artist, is genius. They’ve worked together for 28 years, which means Dennis knows Kurt’s facial structure and appearance throughout the years better than anyone. That comes in handy during a few scenes, and you’ll swear they did indeed go back in time and clip some scenes from other movies. 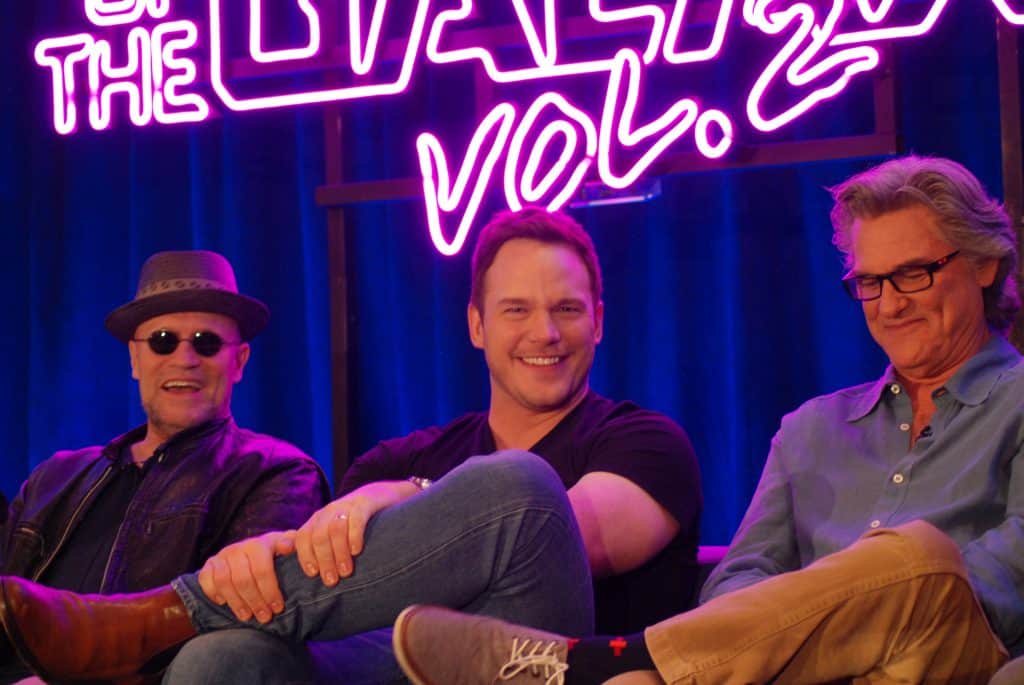 A totally indulgent picture there, as these guys were just too cute and I have so many great photos, far too many to share in just one post. 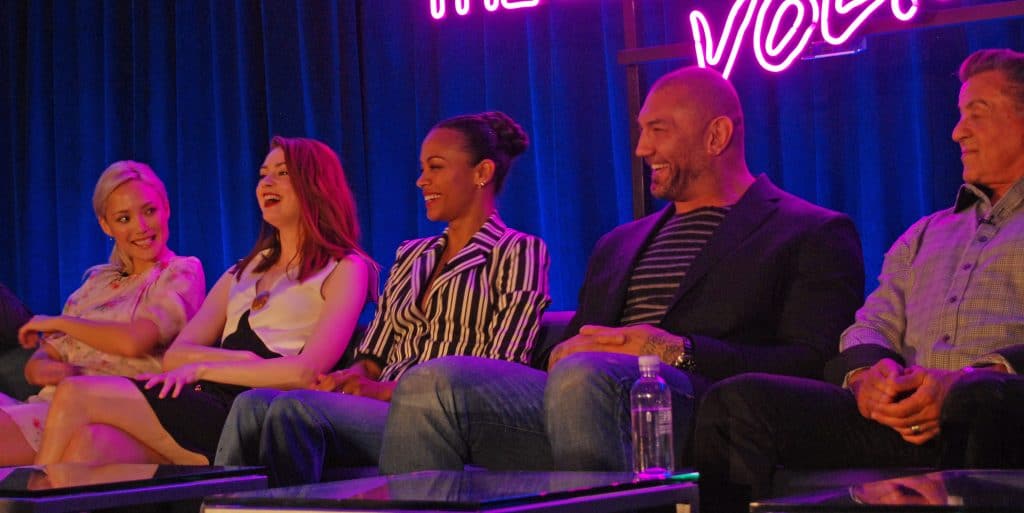 If you close your eyes when Dave Bautista speaks, you hear Drax. In fact, if you look at him — and you can’t help it, he’s got so much charm and genuineness — you see Drax. He’s just such a gentle speaker, it’s so belying given his size and strength.

It was also the first Marvel movie for Pom, who said it was the best time ever and she can’t wait for the next one, and Sylvester, who quipped about snapping wet towels and filming the movie being like a vacation. All the ladies spend about 3.5-4 hours in makeup getting prepped, with Zoe using that time to talk, despite needing to sit still for the makeup to sit right, and Karen seeing it as a ritual. She attempted once to do a day without the makeup as practice, but she found that being fully made-up made it easier for her to be Nebula. That’s dedication to a role.

One question that always gets asked is what the favorite part of being in the movie, or returning to a sequel is, and Zoe’s is the development of the relationship between the sisters. Being one of three in real life, she really looked forward to exploring it all but with Gamora being very reserved, she had to cut it back some. Vol. 2 goes so much further than just saving the galaxy — again — and turns out deep friendships and a family of people you’d never expect to come together.

Dave was lucky, in that he only spent about 1.5 hours in makeup, where he just tuned out until it was done. He was happy to come back to a group of friends that accepted him for who he is, a luxury to return to the recurring role. When asked about his laugh, which you have to see either of the movies to understand, no, it is not his laugh. They wanted it to be larger than life, but Dave is a man of fewer words. He had to be told to “Project, project!” He also had to stop moving his eyes as a form of fidgeting, being told to stop in a way only a loving director could get away with.

Sean Gunn, he’s a surprise, and not just because he actually plays the physical Rocket, in addition to Kraglin. Doing double-duty is obviously a lot, but there are some scenes where the two are in the same shot…imagine the difficulty and fun in filming that! I could listen to Sean talk all day, he’s got a way of speaking that just makes you want to hear more. Zoe went so far as to say that people wouldn’t respond to Rocket in the same way of Sean wasn’t playing him. His favorite part of Vol. 2 is everyone coming together again, a commonality amongst everyone returning for this second in the Guardians series.

We always hear how women want to see more female superheroes, so the question was posed to Kevin if there was any push back in the amount of women in the film. His answer is best shared by quoting him directly:

“No push back and I think we always, there’s lots and lots of great female characters in the comics that we want to bring to life on screen and it was very important to James to include these characters and more than just include them, give them their own storyline and have it be more than just their ability to fight or romance with a male character and that’s why I think Nebula and Gamora are the, you know, high point of the movie and that relationship is one of the biggest and best arcs of the whole movie is that sister relationship. “

There is so much more I could tell you, but suffice it to say that you need to go see the movie. It comes out on May 5th, so in the meantime, watch this trailer if you haven’t already.

In 2020, we started our home renovation. We knew i

Did you watch Tom and Jerry as a kid? I did, and I

Since lockdown started, we realized just how much

During lockdown, it’s been so important to have

Last night, I made an amazing chili verde in the I