Two weeks ago, I got to meet with the cast of Doctor Strange, Marvel’s next movie. It was a long ride into Beverly Hills that morning, with a navigational map full of red and a lot of route changes, but it was totally worth it to see this stellar group of actors. Marvel’s next movie, Doctor Strange, comes out in theaters on November 4, and you’re going to want to line up to see it. (My preview of the movie will be out early on November 4, here on the blog, so check back to read it.) With a cast full of big names that will suck you into the story line, the special effects will have you stuck in your seat. 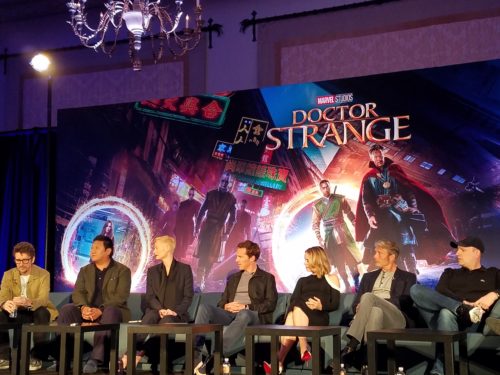 Those in attendance on press day were:

If you’re familiar with the Marvel comic story line, you’ll know this already, but if you’re not, Doctor Strange made his first appearance in Strange Tales, July 1963, Issue 110. That’s a long time ago. So why did the movie just get made now? Producer Kevin Feige explained that the movie had been a consideration for a while now, but with 14 Marvel Comics movies already made, it was time to push the envelope. Doctor Strange made an ideal vehicle in which to do that. Doctor Strange’s character allowed them to add some new boundaries, with the new dimensions and time twists that you’ll have to see to believe. (And if you can, see it in 3D for an added experience.) 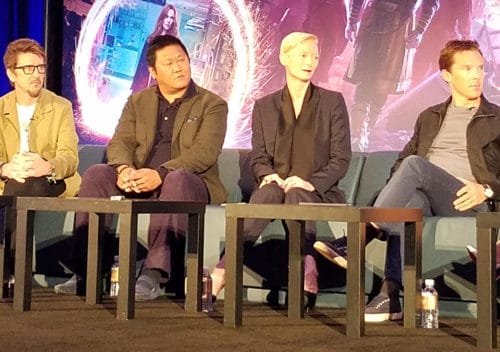 Director Scott Derrickson added a bit to the explanation, sharing how he kept expecting someone to knock on his door and tell him, enough, you’ve pushed it too far, stop. Guardians of the Galaxy was very bold and had pushed it as well, so Doctor Strange came on the heels of that opening. The fact that no one came to the door is a testament to the Marvel franchise and the excellent skills of Kevin Feige and the whole team, as Kevin’s the one that gave Scott the green light. One of Scott’s goals was to take the story, created in the 60s, and make the movie as strange as it was back then. I think he succeeded.

Another goal was to make the movie as cool as the early Stan Lee Steve Ditko art. It needed to be as visually progressive as that era, making every prop and piece of the set as weird as it could be. One look at the movie and you’ll have no doubt he made that happen. One of my favorite scenes takes place in one of the headquarters, so to speak, a museum of sorts. The cloak of levitation inside its glass case gives it a creepy feel yet its got its own humor without saying a word.

In fact, the cloak is what inspired Benedict’s “superhero moment.” (At almost every Marvel press junket, new cast members share the moment it hits them that they ARE a super hero.) Benedict put on the cloak and felt “giddy, like a child at Halloween.” Alex, a designer with a few Marvel movies under her belt, asked him “You’re having the super hero moment, aren’t you?”  He, of course, admitted that yes, he was, and he stood up, giggling. He experienced another super hero moment when they were filming in New York City and it occurred to him that the super hero he was playing was created by people in the buildings he could see as he was acting it out.  (Can you imagine how surreal that would be?) 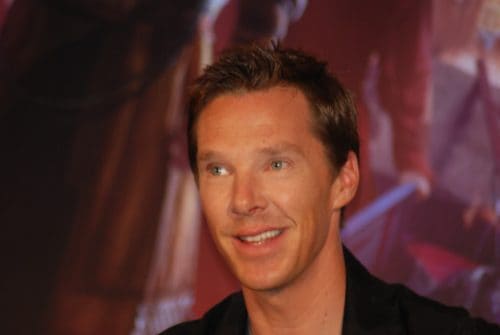 While they were there, Benedict and Scott stopped into a comic store, where Benedict had no cash on him to buy the comics he’d seen, so he offered to trade his services. “If the film doesn’t work out, I’ll come back and stack the shelves for you.” The clever clerk said okay, but he had to keep his American accent if he was going to work there. Day made for those in the store, I’m sure.

One really cool fact is that the production timing on Doctor Strange was pushed in order to include Benedict. Once Kevin and Scott had decided they wanted him for the role, they knew they were going to have to work around his commitment to Shakespeare’s Hamlet in London. Benedict mentioned that it was incredibly flattering and a great motivator to do the role right.

With several of the actors new to the Marvel Cinematic Universe, a big question is always “What’s it like to join a Marvel movie?” Rachel McAdams was candid in her response: 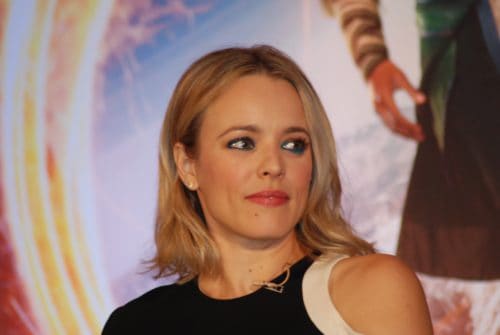 Tilda’s response was so cute that I want to share the whole thing with you: 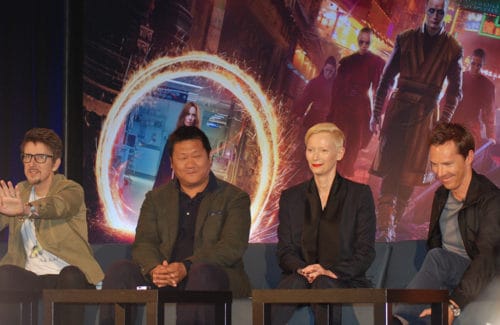 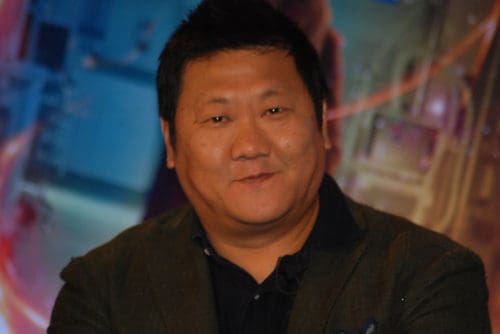 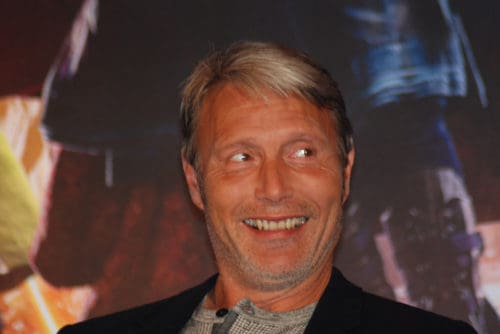 Listening to the cast of Doctor Strange joke and show their rapport always supplies fun insight and this group was no exception. The press moderator used the Comic Con cast photo as an example. I wasn’t lucky enough to be at Comic Con but I wish I had. It’s clear that this is a tight knit group. Their responses to the question above were all so unique, we got a window into each of their personalities. 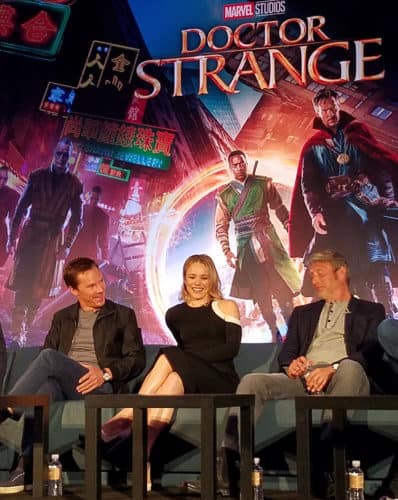 One big part of the movie are the motions involved in much of the magic that occurs. Tilda explained more about the filming of it. The motions are called “tutting,” and there was a professional on hand to teach the cast how to do them properly. The movie makes it look so easy, but the moves had to be done very specifically in order for the special effects to match. She even did a little for us. I can’t wait to see the movie a second time so I can appreciate that work a little more now. 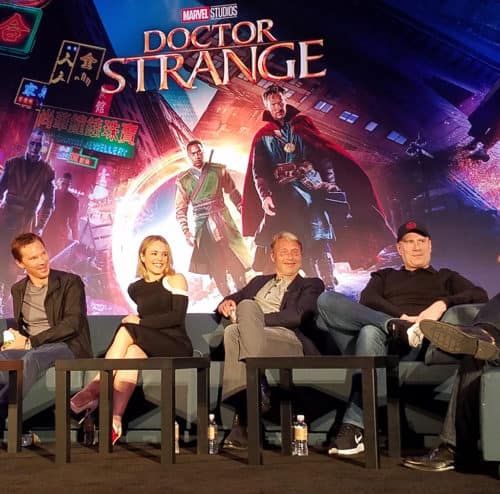 Rachel was unfamiliar with the story line, so she had to get up to speed with the story line, something she thoroughly enjoyed. She plays a doctor in the movie, giving her a little insight to what her mother, a nurse, dealt with. Rachel didn’t get to do any of the tutting, but she did get to meet with a neurosurgeon for some guidance into playing a doctor. She admitted she hadn’t inherited her mother’s medical genes, but seeing the movie, you wouldn’t know that.

I could go on and on with more that the cast and crew shared, but you need to see the movie. I’ll end it with this fantastic statement from Kevin Feige: 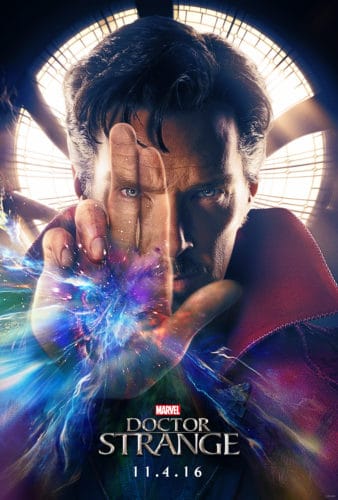