This past weekend, I got the opportunity to watch Pirates of the Caribbean: Dead Men Tell No Tales. Not only that, but I also got to help interview a few members of the cast for this exciting movie! We had five mini-press conferences, with the following people…

First, we got to talk to Jerry Bruckheimer, the producer of this astonishing film, along with Black Hawk Down, and Remember the Titans. The first question asked was one of the most crucial questions, one that we have all wanted to know – what made this film so distinct from the other before this? Simply put, this film was filled with so much more emotion. Throughout the movie, they really focused on different relationships met along the way; some old, some new, some totally unexpected.

This answer carried into what was the next question, why were these particular directors chosen for this movie? Jerry explained that since it was filled with so much more emotion, he wanted the directors to have the same kind of emotion to match, plus he felt that they’re both brilliant filmmakers.

Speaking of brilliant filmmaking, there were so many different parts of this movie that were absolutely incredible to watch. There’s a scene in the movie where you get a small peak into the younger years of everyone’s favorite pirate – excuse me, Captain – Jack Sparrow. In the scene, Jack is walking around on ship, evidently many years younger. The scene explains just how he came to be captain, but you’ll have to watch the movie for yourself to find out exactly how it came to be. When Jerry Bruckheimer was asked how they made that scene, he explained how they had a younger actor who looked very similar to Johnny Depp. They took film of him in the scene, along with Johnny in the scene, and actually meshed the takes together to create this compelling scene.

Another stunning act of filmmaking in this movie was how Javier Bardem’s character looked, the sinister Captain Salazar. Jerry explained that this was the biggest surprise throughout the entire creating process, because it took almost an entire year to get his appearance to turn out exactly how they wanted it.

Javier Bardem was the next member of the cast that we got to interview. He was immediately all smiles, even though his eerie character would normally have black, viscous blood oozing out from his mouth. In the movie, Captain Salazar had drowned in the past, explaining the ghostly appearance. Javier told us later that the fake blood actually tasted like chocolate…rotten chocolate, that is.

And speaking of his ghostly appearance, he’s actually wearing a handmade face prosthetic! Being a fan of special effects makeup, this is particularly interesting to me. Before the movie was done, so much of his costume and makeup wasn’t even done, as there were still parts that were going to be edited later. He tells us that other people on set were chuckling along with him, because at the time, it didn’t look like he was going to be able to scare anyone. Oh, little did they know… 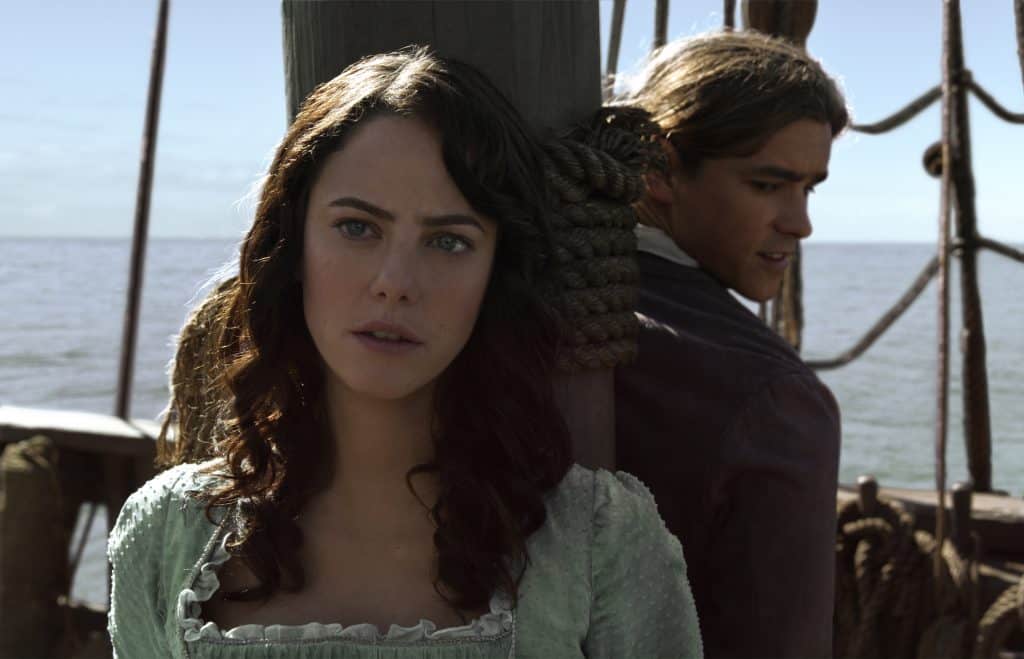 Next up, we got to talk to Brenton Thwaites and Kaya Scodelario, who played Henry Turner and Carina Smyth, respectively. Both of them were so lighthearted, and throughout the entire interview, they kept bringing up inside jokes between them that happened on set. My personal favorite being…

There’s a scene in the movie where, without giving too much away yet, there’s a huge crowd, and Carina keeps trying to talk, but nobody is listening and everyone keeps talking over her. Well, during the filming of this scene, Brenton was admittedly not paying attention when they started filming. Kaya yelled “Quiet!” at the very top of her lungs, and Brenton, who had no idea it was part of the scene, told us, “I really thought she had just lost it.”

Since Pirates of the Caribbean was originally an attraction at Disneyland, both Brenton and Kaya were asked if they were fans of the Disney parks, and what their favorite Disney movies were. Much to all of our surprise, Kaya admitted she has never been to Disneyland. However, her favorite Disney movie is 101 Dalmatians, and her bedroom growing up actually had the movie as the decoration theme. Brenton, on the other hand, says Beauty and the Beast is his favorite Disney movie.

Geoffrey Rush was the next we talked to, and no matter how much you love him in the movies, he’s even more wonderful to talk to in person. He has such a great attitude about everything, and you can just see how passionate he is about everything he does with these movies.

The first thing he told us was something that I definitely didn’t expect, but absolutely love; his daughter actually works in costuming for this movie! He was explaining to us that in one of the most dramatic scenes in the movie, there was an anchor, and that anchor was real. In the scene, our fascinating Captain Barbossa was climbing on the chain of the anchor, trying to get to safety on the ship above. Well, in the making of the movie, he really was hanging on the anchor, too! Needless to say, him performing this thrilling stunt greatly impressed his daughter, and he was so proud about it.

He described Captain Barbossa’s style as “an old fading glam rockstar.” When asked why he keeps coming back, he told us that he feels every character can continue to have new dimensions built up with each scene, with each movie. He explained that while Captain Jack Sparrow is this “existential, free-willed” character, Captain Barbossa is the more controlling captain who wants to be boss, and the Black Pearl is kind of the “shared girlfriend” between the two. Because of this intriguing relationship, he said he loves to come back to see what kind of scraps Barbossa and Jack get into. 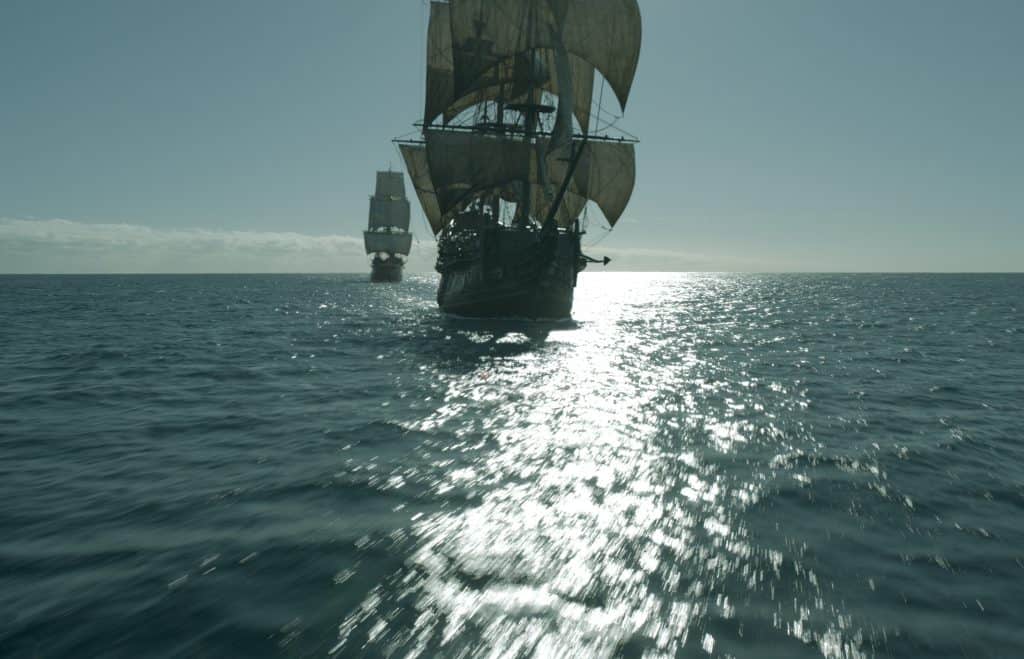 Lastly, we were able to talk to the two directors of the film, Joachim Ronning and Espen Sandberg. Directors are always so involved in everything when creating a movie, and this experience was no different. They helped with sets, with characters’ appearances, and even small little moments that help to create a larger-than-life spectacle. They talked with us for several minutes about the establishment of Captain Salazar’s image. Captain Salazar had actually drowned, but came back as still being dead. So first, they came up with the story of how it happened, and then they actually came together with Javier to create his look.

Oh, and if you were wondering, their favorite Disney attraction is Pirates of the Caribbean. Who would’ve guessed?

So much more was talked about, but if you see the movie (and yes, you will go see the movie), you will find out so much more. Keep an eye out for my review on this movie on opening day, Friday, May 26th! In the meantime, check out the trailer if you haven’t seen it yet, and let me know what you think!

Now buy your tickets for this amazing Disney movie sequel — you’ll be glad you did!
Tweet
Share12
Pin
12 Shares
Previous Post: « Celebrating the Knott’s Soak City Grand Re-Opening in Buena Park
Next Post: Yo Ho, Yo Ho, a Pirate’s Life for Me: Disney’s Newest Pirates »