You are here: Home / Entertainment / Set Tour of ABC’s The Kids Are Alright: It’s Headed for a Full Season!
Tweet
Share
Pin
0 Shares

Our set tour of ABC’s The Kids are Alright, led by Caleb Foote (“Eddie” on the show), took place last week, before we knew the fate of their show, but I’m happy to say that it has since been announced that they were given the GO on the whole season! Congratulations to the cast and crew of The Kids are Alright! 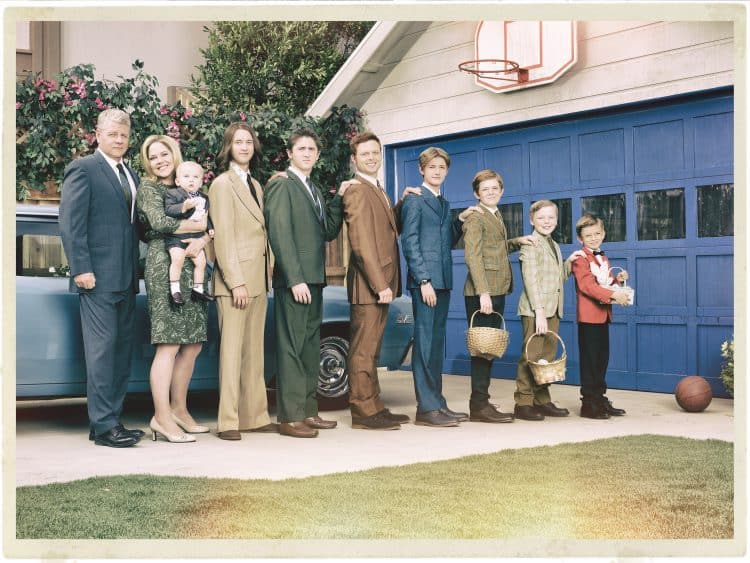 We spent a couple of hours on set, touring everything from the rooms in the house, the back yard, and the wardrobe department. We also got to meet a few members of the cast — such as  actors Caleb Foote (“Eddie Cleary”) and Michael Cudlitz (“Mike Cleary”), production designer Michael Whetstone, set decorator Claudette Didul, costume designer Susan Michalek, line producer Kris Eber (he greeted us and wrapped up the tour) and last but not least: the show’s creator, showrunner and executive producer Tim Doyle. I have so much to share with you! 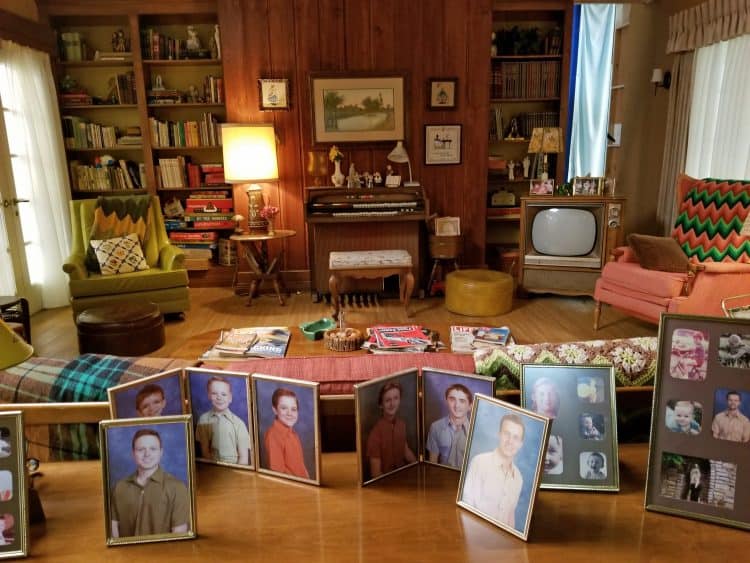 The first thing I will say is that the set was amazing, down to the absolute smallest of details. It’s a lot smaller than it looks on TV, but that’s by design — the premise of the show is based around a very large Irish-Catholic family, the Clearys, living a typical life in the 1970’s. Inspired by Tim Doyle, who lived it himself, the show hits upon a lot of real issues faced during a very turbulent era. With a lot of laughs and more than a little nostalgia, it only took one episode for this show to become one of my favorites! 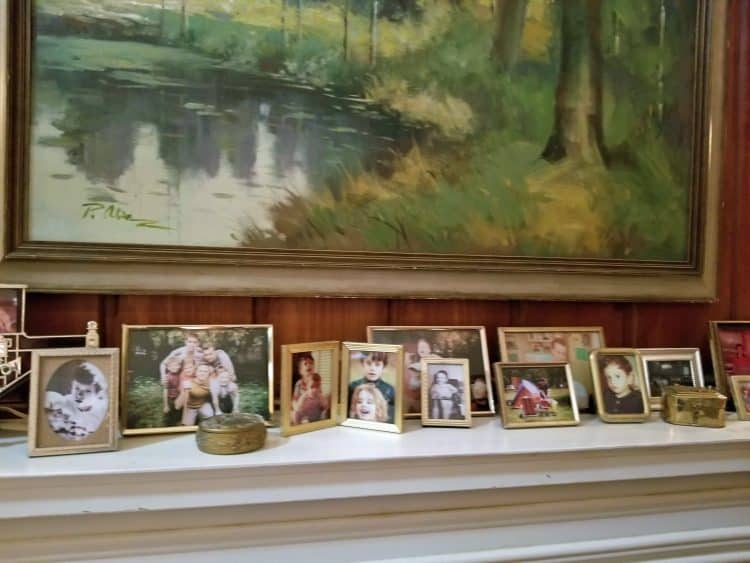 The show is hilarious, from the kid that has to sleep under the dining table to the need for each family to have one son enter the priesthood to hiding in the phone closet with the phone that had the super-long curly cord that would knot up all the time. All eight children are boys, wrangled by super-busy mom (Mary McCormack) and Logan Aerospace-employed dad (Michael Cudlitz). Watching it, I had a lot of flashbacks to when I was really young. (My oldest will be 30 in a few days!) The jeans covered with patches that don’t match, the excitement of eating at a Sizzler buffet, the required church involvement — they do a fantastic job of portraying the era. 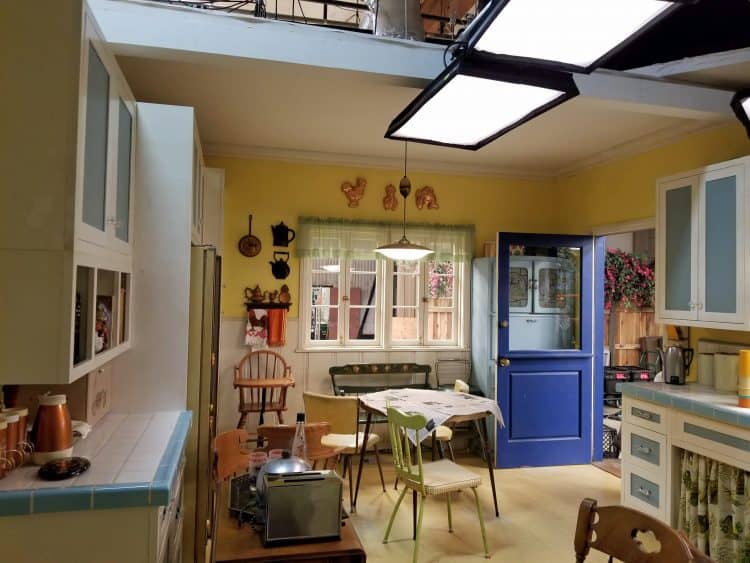 Based on a ranch house built in 1932, the set’s clutter and layout is all about nostalgia. We can look at the details and think “My grandmother had that!” Mission accomplished! I noticed a lot of things that I saw when my parents cleaned out their house for a movie a while back: the penguin ice bucket, Tupperware tumblers, the wooden nut tray with cracker, and the list goes on. Building a set from a bygone era can pose challenges, requiring a lot of reading through piles of magazines, searching and sometimes, building things themselves, like the kitchen table. Estate sales or Target (which they did have to use for things like vintage lampshades, which don’t necessarily last from the 70s), they’ve done it all. Every single item in the house went through a proof of authenticity. One fun piece of trivia: a lot of the furniture isn’t from 1972, but from the 50s and 60s, as the Cleary family couldn’t afford new furniture! 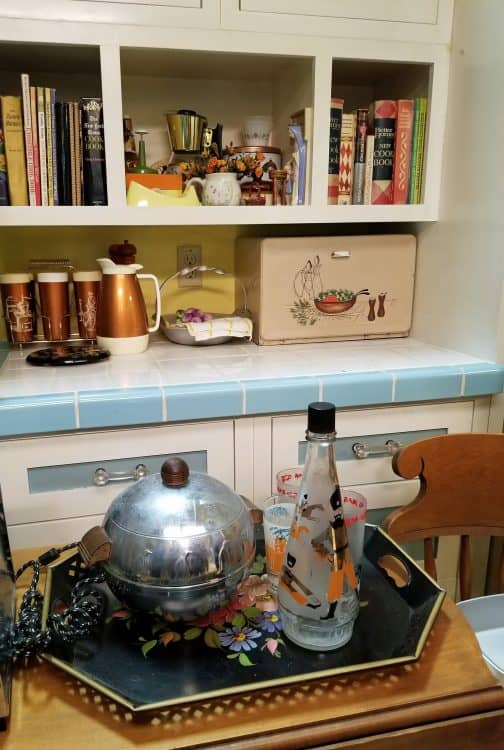 The living room has a slide-out area in the back, to the right of the fireplace, where camera equipment can sit in order to film the whole room. It’s all a tight squeeze, but it gives us all a much better feel of how tightly wedged this family is into this tiny home. From the mantel covered in family photos to the multiple beds stacked in one of the bedrooms to the bathroom counter covered in various hygiene items, even down to the toys and dirty clothes on the floor, the set design team have transported us all to a different time and made us like it. 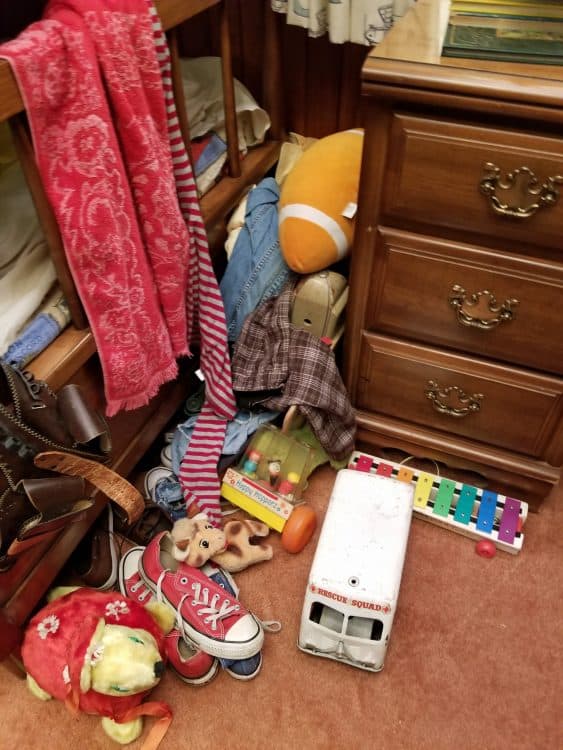 Attention to detail also applies to the wardrobe. We toured the wardrobe trailer and offices, learning about the process of clothing the entire cast from Susan Michalek. There’s an entire trailer devoted solely to running that very important part of the show, with a long hallway lined by hangers full of outfits for everything a character could need. 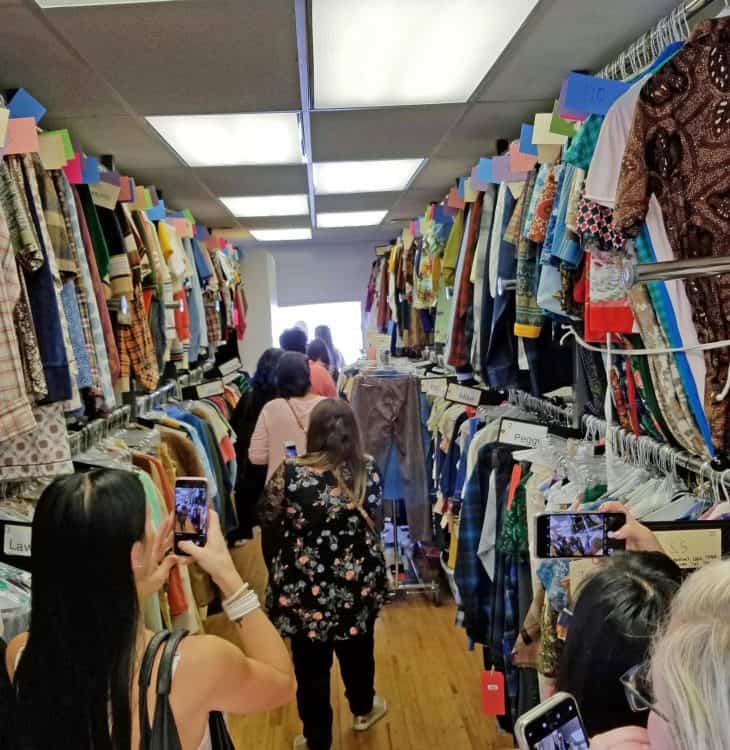 We saw the vestments for older brother Lawrence, who returns from seminary in the first episode, Ditto jeans with the seam up the legs and across the backside to go down the other leg, and brightly colored bell-bottom jeans. Cowboy-themed shirts were big back then! Things were divided by character as well as need: church clothes, for example. They dressed 275 people in 70s attire, and there is a LOT of polyester. 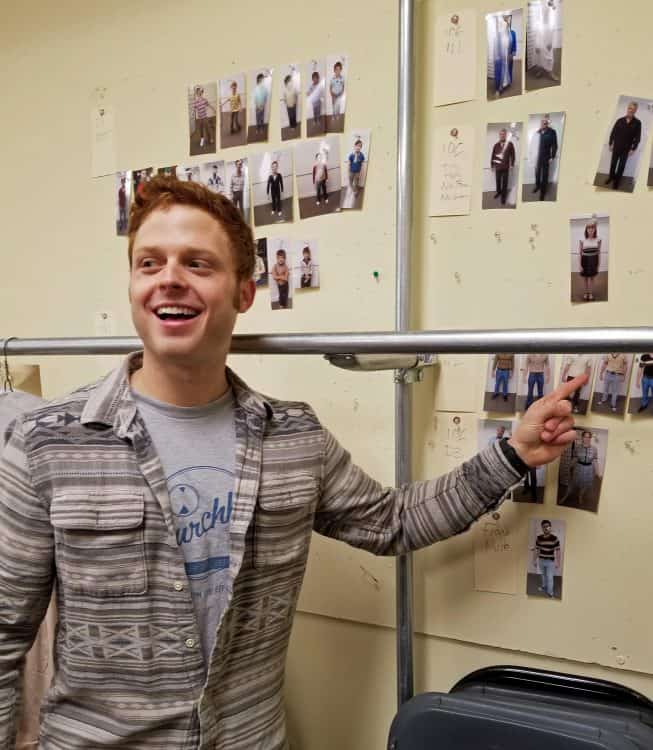 Outfits are not just put together per character, but they’re also compared to the whole scene to ensure no two characters are matching too much. There is so much more to wardrobe than you’d think! Each episode requires 50-52 outfits, which are prepped and ready to go the night before. (Caleb is pointing out Eddie’s photos for us above.)

Episodes are shot one per week, with five days of shooting. They read for the next week’s episode on Thursday, receive the final script on Friday and spend the weekend memorizing it so they’re ready to start the first day of shooting on Monday. That makes for a busy week for everyone, and the kids are mostly minors, requiring them to attend school for several hours per day — depending on their age — so they have to get creative when setting up the shooting schedule to ensure everyone gets their schoolwork done. It even requires having stand-ins so the rest of the crew can move forward. Did you know that whenever there’s a baby in a show, it has to be twins? 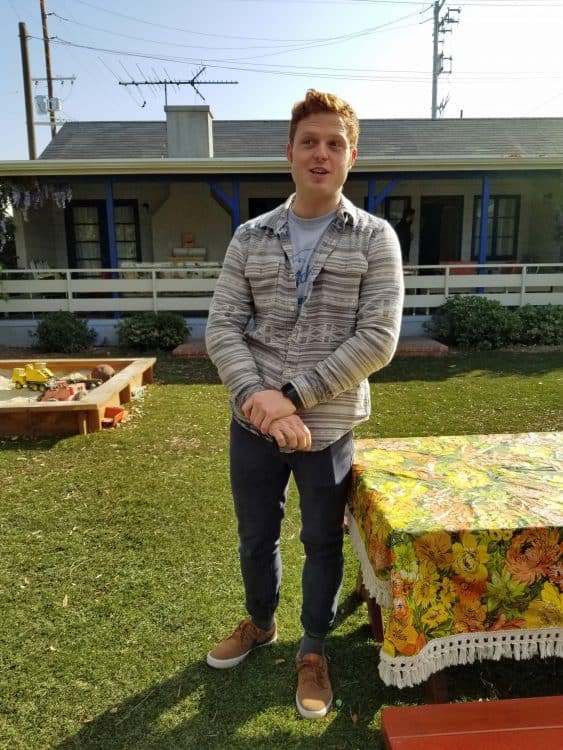 Another piece of trivia: the indoor set is not in the same place as the outdoor scenery! The backyard is actually filmed on the same lot, but it’s a walk down the driveway, where the back of the house is put together with the sand box, laundry line and life-sized treehouse on a 7,000 square foot lot. 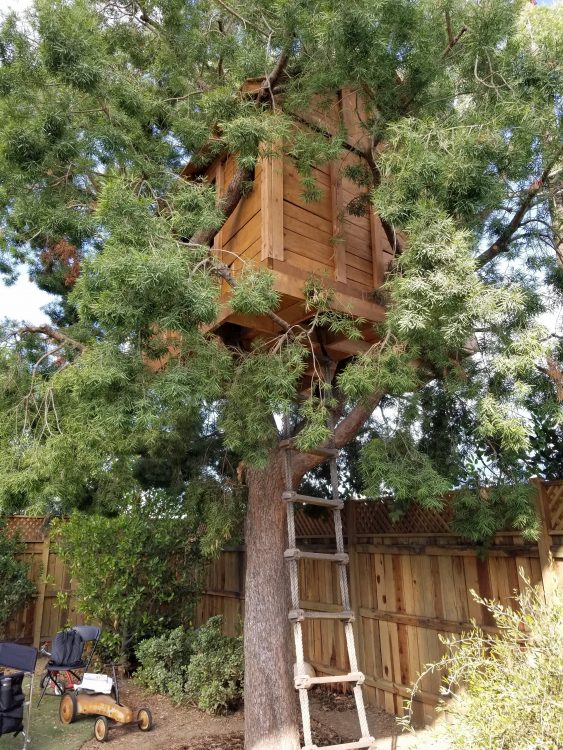 It’s also the site of the garage and car. Isn’t she a beauty? (That’s an actual non-set building next door that, due to the magic of television, won’t see when you watch the show!) 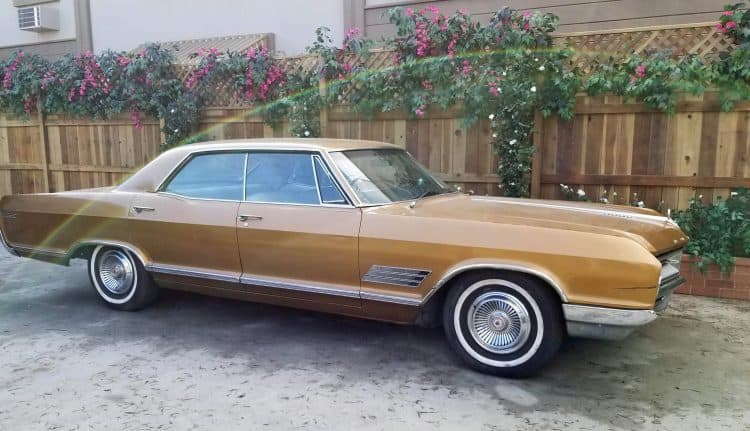 When you look out of the window from the interior set, you’ll see trees and just enough to be realistic, and in the backyard, you’ll see just enough for it to match the interior. A fake backyard can look good, but lighting issues crop up so having a real tree in actual sunlight makes it even more realistic. The only thing not real in that yard is the grass, which needs to be artificial to withstand the heavy foot traffic and camera equipment. One of the trees is 24′ tall, rooted 9′ down in the concrete and weighs 30,000 pounds. 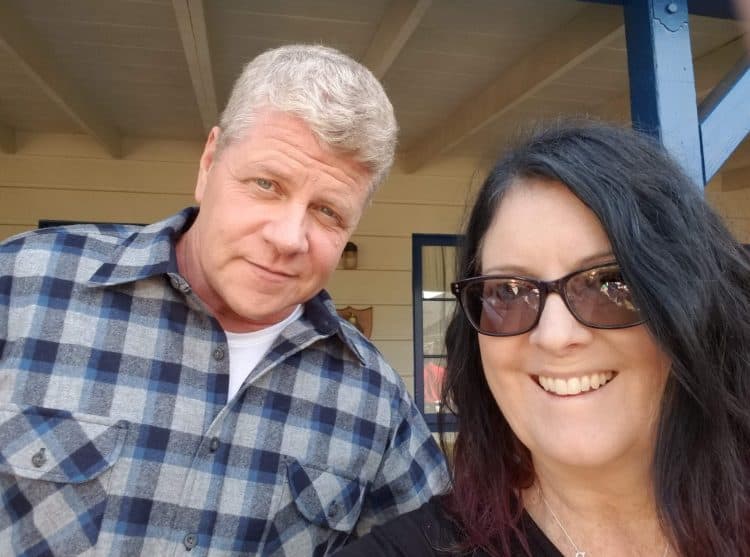 If you haven’t started watching the show yet, jump in now! You can always catch up from On Demand, but if not, just start watching with the next episode! Here is a teaser:

“Peggy’s Day Out” – To hide a mess Eddie made, his girlfriend, Wendi, tries to distract Peggy by insisting she take a day off with a fun day out while they take care of the housework. To everyone’s surprise, Peggy accepts the offer and requests Wendi tag along, with the ulterior motive of teaching her a lesson. Meanwhile, Eddie enlists the help of his brothers to clean up and keep Mike out of the house while Wendi and Peggy are out. Elsewhere, Pat introduces Timmy to his secret dog on “The Kids Are Alright,” TUESDAY, NOV. 13 (8:31-9:00 p.m. EST), on The ABC Television Network, streaming and on demand. 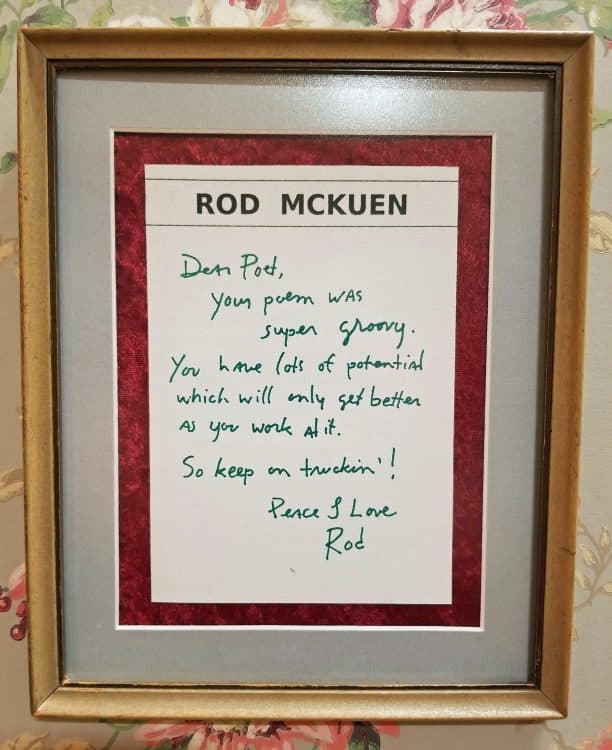 That is an actual photo prop from the kitchen wall. You’ll recognize the importance of it from Episode 2! (Mom Peggy teaches her son a lesson in a way that he will always remember, while bonding them together.) I promise you, you’ll laugh and you’ll grow to love the Clearys! I’m so glad to know we get to watch them a lot more!