A few weeks ago, I had the lucky opportunity to attend early press day with the Zootopia team at the new Tujunga campus. After a surprisingly easy drive to Burbank, I met everyone at the Disney Studios, had breakfast with some blogger friends and loaded onto the shuttle for the ride to Tujunga. The excitement was palpable — a day to watch movie clips, tour the Tujunga animation studio, meet the big players in creation of the film and of course, at the end of it all, lunch and time to ask questions — because “In Zootopia, anyone can be anything.”

One thing I learned is that when we see an animated film on the screen, we’re seeing years of hard work. We’re seeing the efforts of hundreds of people, tons of man hours and equipment, imagination and perfection beyond belief. When we laugh, or cry, the film makers have succeeded in the culmination of their dream and what they’ve lived and breathed for all that time. Every little scene, every detail, literally every shadow is considered when a movie is animated, and I got to see how they do it!

The Tujunga campus is nothing short of amazing. For a building temporarily in a warehouse, as the animation studio off of Buena Vista is being renovated, you wouldn’t know it from the inside. Walls are painted in murals, artwork from Zootopia and other movies is everywhere, and there’s a full-sized cafeteria. (Who doesn’t want their employer to have a cafeteria??) We weren’t allowed to take photos inside most of the building, but we were given some professional photographs to share. 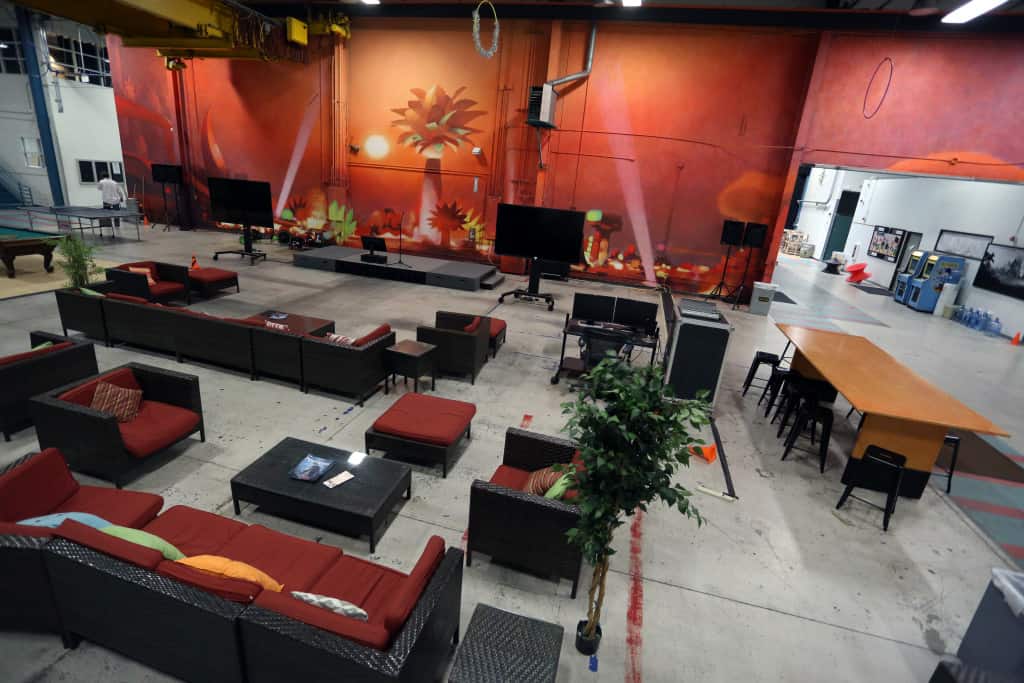 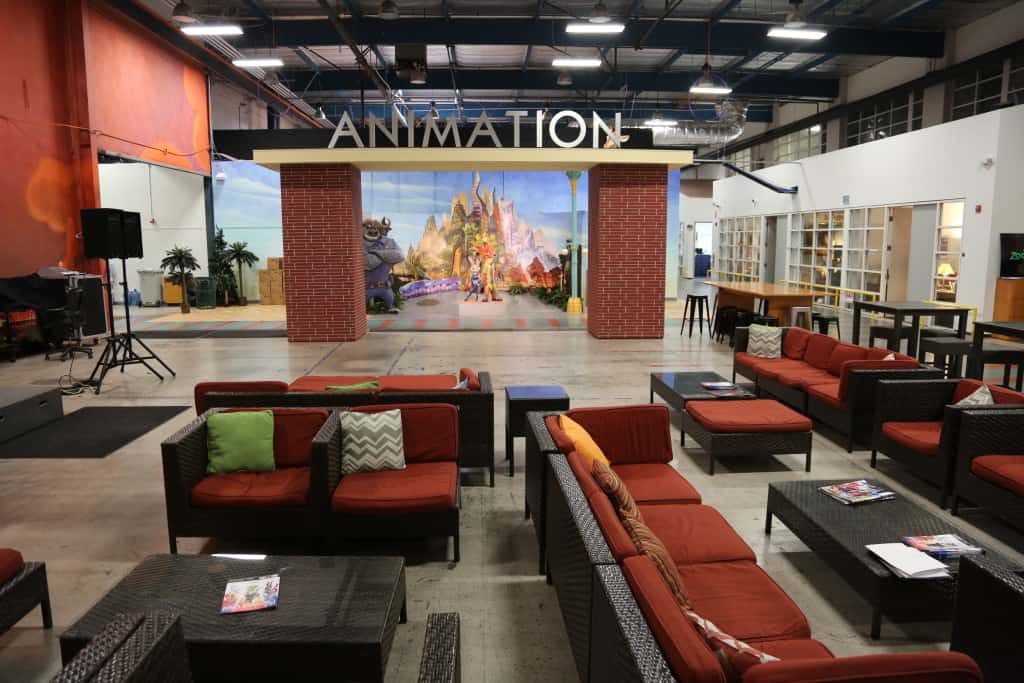 ZOOTOPIA – The modern mammal metropolis of Zootopia is a city like no other. Comprised of habitat neighborhoods like ritzy Sahara Square and frigid Tundratown, it’s a melting pot where animals from every environment live together—a place where no matter what you are, from the biggest elephant to the smallest shrew, you can be anything. But when optimistic Officer Judy Hopps arrives, she discovers that being the first bunny on a police force of big, tough animals isn’t so easy. Determined to prove herself, she jumps at the opportunity to crack a case, even if it means partnering with a fast-talking, scam-artist fox, Nick Wilde, to solve the mystery. Walt Disney Animation Studios’ “Zootopia,” a comedy-adventure directed by Byron Howard (“Tangled,” “Bolt”) and Rich Moore (“Wreck-It Ralph,” “The Simpsons”) and co-directed by Jared Bush (“Penn Zero: Part-Time Hero”), opens in theaters on March 4, 2016. ©2015 Disney. All Rights Reserved.

Zootopia, in short, is a movie about a world devoid of humans, and not just any world. It’s as if humans never existed, and the animals built the planet like humans would, but completely for animals. Elevators are made for animals of all sizes. Instead of having different countries, different neighborhoods exist, each built for specific animal needs, like Little Rodentia, Sahara Square (inspired by Monte Carlo and Dubai) and Bunny Burrows. All of the habitats are built around a beautiful, colorful and vibrant center complete with a police department, ice cream shop and other regular buildings you’d see for humans. Animals need clothes and food, too!

When you watch a movie and a wind blows, do you notice the hair on the animal blowing? I never know how much work went into making sure that’s realistic! (And as a mom, I know that kids notice things we don’t.) It starts with going to Africa to see the animals living in their real environment, watching how they interact, what they look like up close, what they feel like (when possible) and what makes up their fur. Did you know, for example, that a polar bear’s fur is essentially clear?  They then blew fans onto hair to see what happens, before getting it to the people who make the magic happen; there are teams of people, departments of people, and the scenes rotate from concept to storyboards all the way to those who finalize the film.

Another interesting fact is that 90% of animals in the wild are prey, with only 10% being predators.

In walking through the building, we got to listen to the team leaders share some of the behind-the-scenes details of the film, then ask some questions. (I have to admit that I lost my voice recorder at the press conference for Good Dino and my recordings are on that! I left it on the table in my conference room and before I realized it, I was halfway home. I called the hotel but no one found it. Sad.) 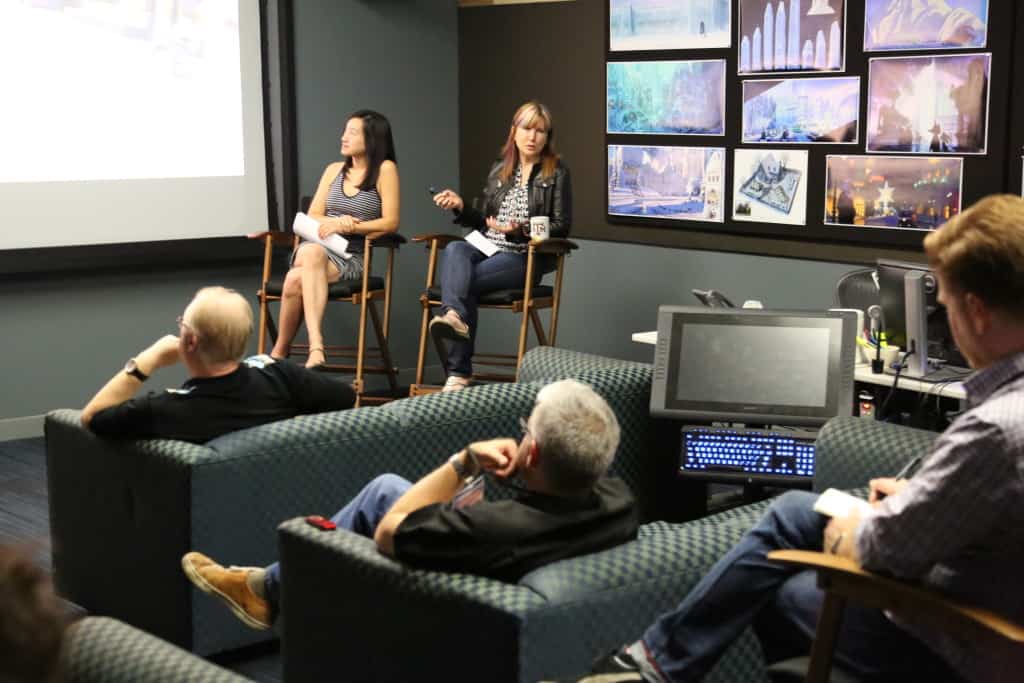 Interested in knowing how to create this huge metropolis so accurately? Talk with Art Director of Environments Matthias Lechner and Environment Look Supervisor Lance Summers.

Once you see the movie, you’ll be in love with sloths, and you’ll want to thank Head of Animation Renato dos Anjos and Animation Supervisors Kira Lehtomaki, Nathan Engelhardt, Jennifer Hager and Chad Sellers, along with an animation team, for their fun and realistic creation that puts sloths on your list of animals you’d love to meet…if you were ever going to the DMV in Zootopia.

As shared with us, at Walt Disney Animation, story is the king of the jungle and Writer and Co-Director Jared Bush, Writer Phil Johnston, Story Artist Marc Smith and Head of Editorial Fabienne Rawley put it all together to create Zootopia all the way to the editing room. 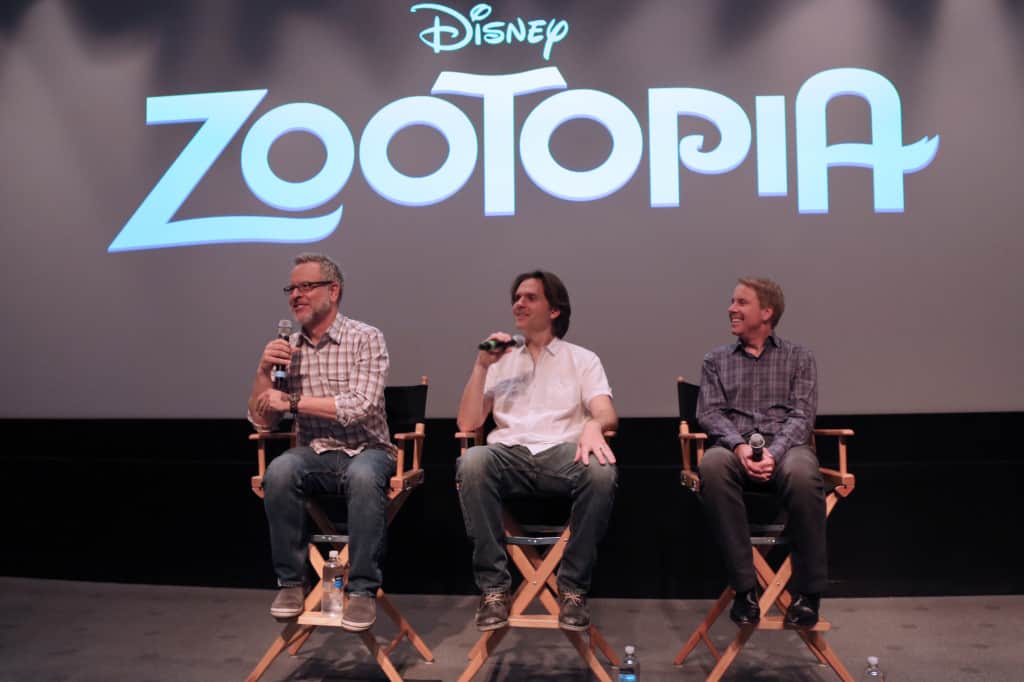 Zootopia is about Judy Hopps (voiced by Ginnifer Goodwin), a rookie police officer from Bunny Burrows, a land made mostly of farmers, who wants to go to Savanna Central — the center of the metropolis, inspired by Disney’s hub and spoke design — to make it in the big city. She views it as the place where dreams come true, but she quickly realizes it’s not as easy as she’d hoped. She’s a ground breaker, the first bunny police officer, and not only is she new to the city but she’s the tiniest officer on the force.

To prove herself, she’s got to go big or go home, so she ends up teaming with Nick Wilde (voiced by Justin Bateman), a shrew fox, to solve a crime and show the rest of the force that she means business. It’s a movie about going outside of your box, following your dreams, conquering your fear and looking beyond the obvious. Disney does a fantastic job of showing us all that whatever size you are or how many teeth you have, you are important and capable and friendships can happen between anyone.

Zootopia comes out March 4, 2016. It will make a great family night and I guarantee you’ll love it!

And the Zootopia team made sure I got to have a little fun with the green screen!