You are here: Home / Marvel / Guardians of the Galaxy Vol. 2, or GOTG 2 is Even Better Than the First
Tweet
Share16
Pin
16 Shares

Guardians of the Galaxy Vol. 1 was a breakout hit, a surprise to many people who were unfamiliar with the story line. I, a diehard Avengers lover, wasn’t even sure how I’d feel about it but hey, Chris Pratt. Then I got just five minutes into the first one and was hooked…hooked on a feeling…you knew that was going to happen, right?  The movie was fantastic and I came away excited about this new set of characters with so much potential. Little did I know that when GOTG 2 came out I would think it was even better than the first one! Marvel scores again with another movie sure to break some records. 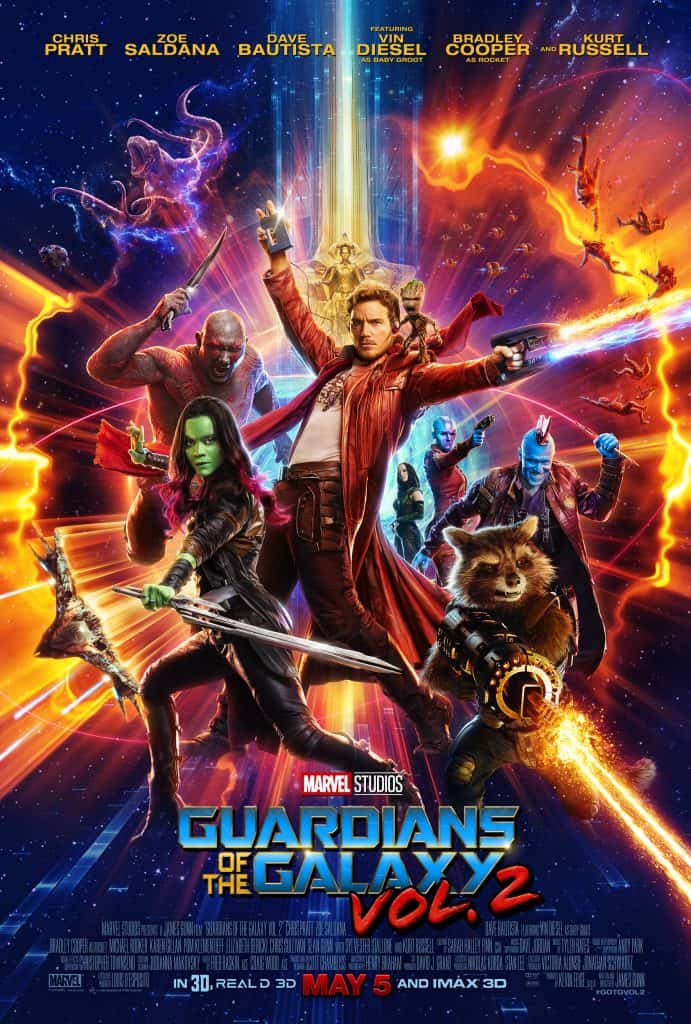 If you saw the first movie, you know that the Guardians are a ragtag bunch of emerging heroes, each with their own agenda but with a cumulative goal: save the galaxy. In GOTG 2, they are saving the galaxy, again, but this time for a whole different reason. 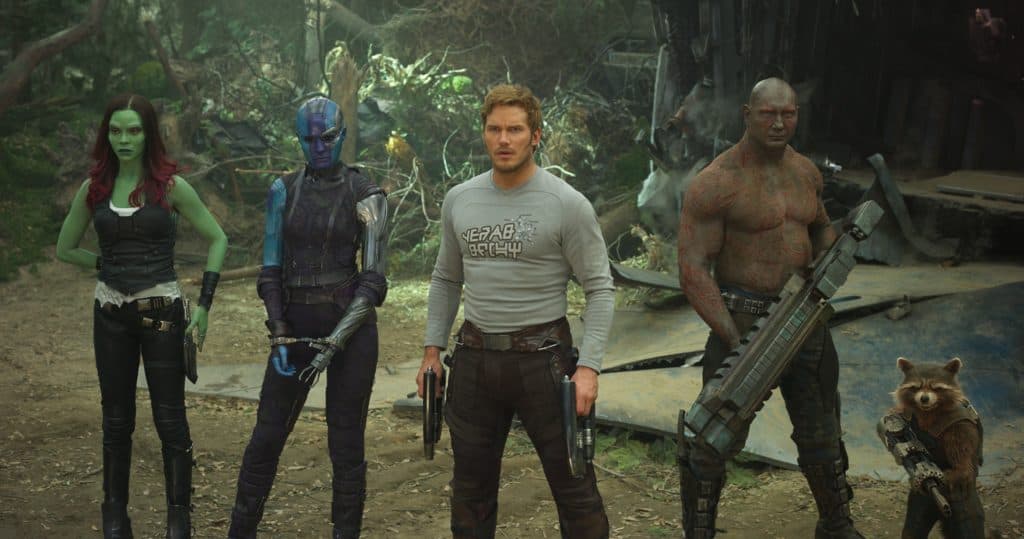 Most characters from the first Guardians of the Galaxy return, but we see them all fully fleshed-out. One of the teaser clips that’s been on TV the last couple of days is Drax talking to Peter Quill about how his wife was not a dancer. “The most melodious song would play and she would not even tap her foot.” Said in his rather monotone and literal voice, it’s a very funny scene. By the end of the movie, you’ve gotten a real handle on his perspective towards life, Gamora’s upbringing with her sister — and why there is so much resentment in their relationship — and of course, the big plot twist, Ego, the living planet’s relationship to Peter, aka Star Lord. 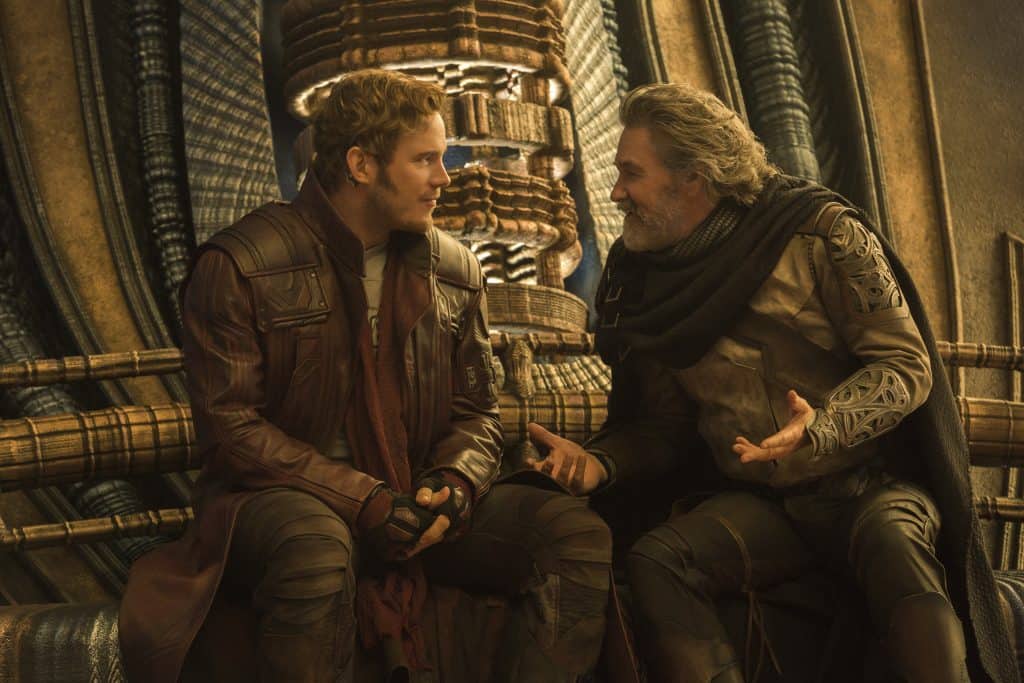 Not to be ignored is the sound track. Marvel was under a lot of pressure to beat the mix tape from Vol. 1, but I think they succeeded. Unlike Drax’s wife, you’ll be tapping your feet in the theater, if not doing a little seat dancing when Brandy comes on. The GOTG 2 soundtrack is one to buy, especially if you like to collect MCU music. 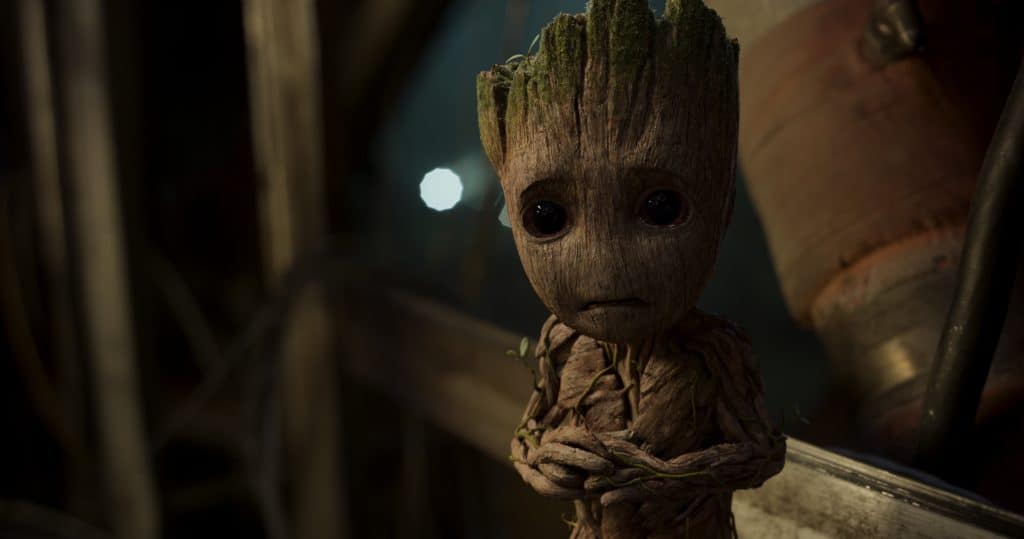 The movie starts off with a humorous battle scene and it just gets more action-packed and humorous as the movie builds. Groot will steal your heart all over again. In the first movie, his infamous “I am Groot” phrase, translated by Rocket, stole many scenes, but when you see Baby Groot’s eyes get big and sad, you will melt. The backstory of Peter Quill’s parentage is explored and before long, you understand how Peter came to be with Yondu and more importantly, why. Feelings will change as you learn more about that history and soon, you’ll be surprised at who you are rooting for. 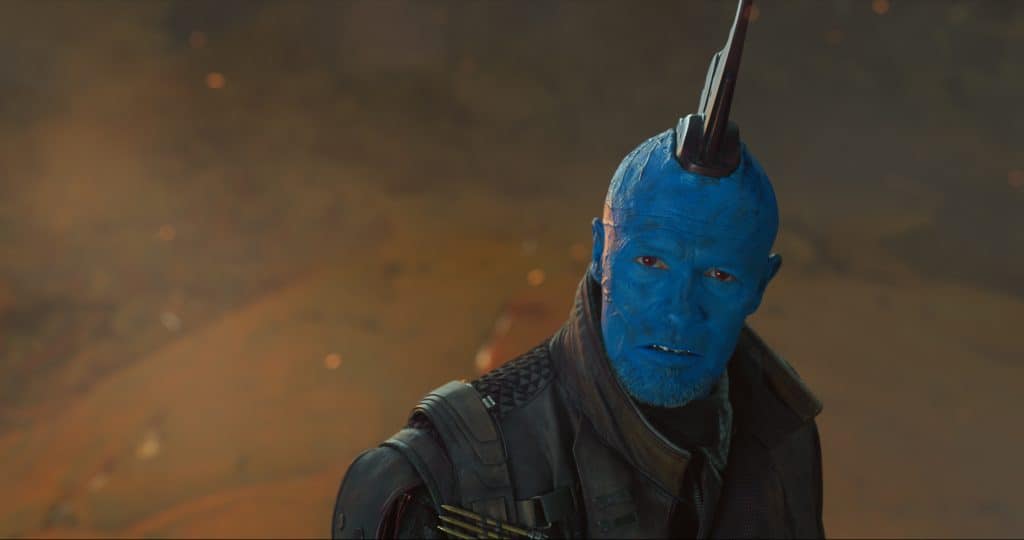 Kraglin, played by Sean Gunn (who also plays Rocket’s physical role) has a much bigger part than in the first movie as new heroes are recognized and the team again comes together to save one of their own in addition to the galaxy itself. 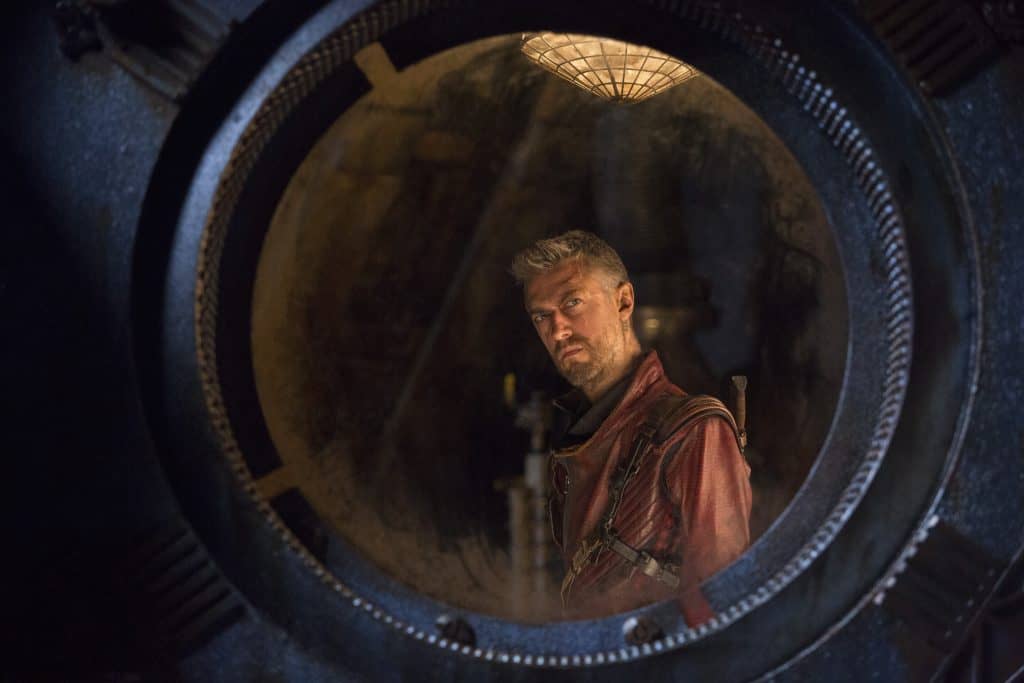 Special effects are spectacular, particularly during one scene with many space jumps — kudos to the makeup and effects team for having us both laughing and in suspense at the same time. Then there’s Mantis, an antenna’d new addition to the Guardians family. Her seemingly simplistic behavior is hiding an intelligence and understanding that ends up playing a critical part in helping Nebula save Peter from a scary fate. 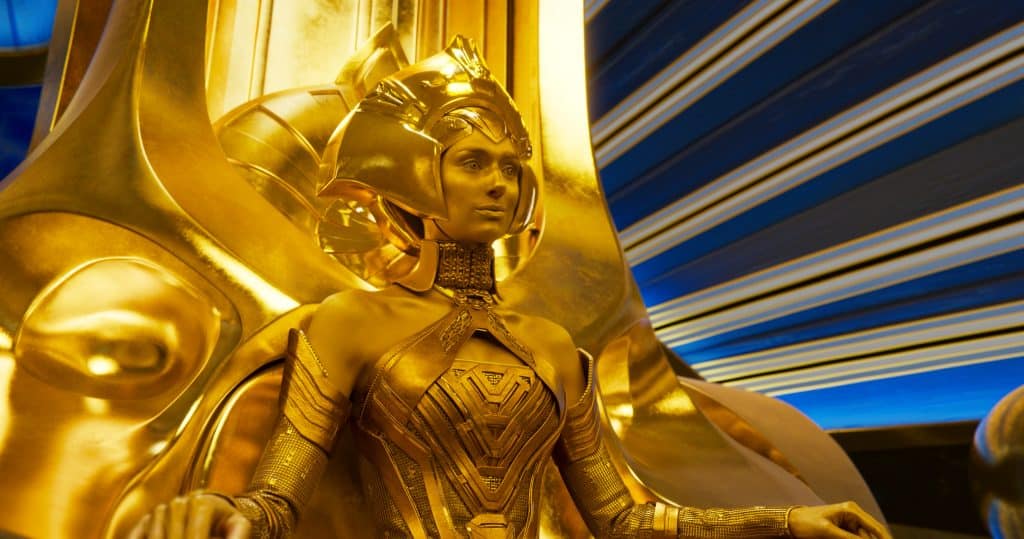 This intimidating creature in gold is Ayesha, a new nemesis with a vengeance…for a reason that totally could have been avoided if it wasn’t for the antics of Rocket, antics that spiral into a huge hot mess for the Guardians. 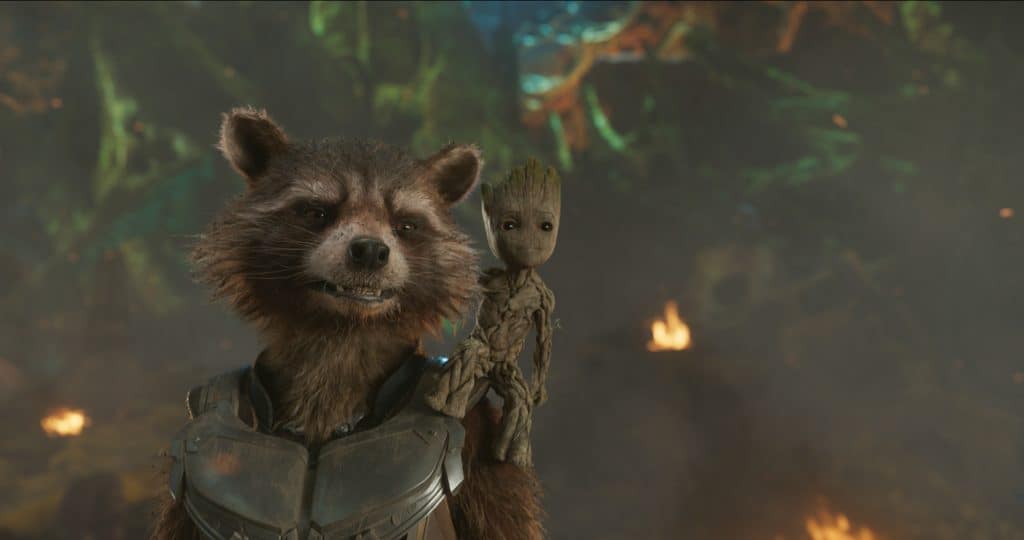 It wouldn’t be a Marvel movie if there wasn’t a Stan Lee cameo and you can’t miss it. There’s a lot of humor and the pace moves quick, so settle in for the long haul with your popcorn so you don’t miss a minute. I really do think that Marvel surpassed their goals for a successful sequel and that Vol. 2 really is even better than the first one. My bar for a Marvel movie is pretty high and they never, ever let me down. I can’t tell you how it ends, but I will say that I cannot wait for the next time they come together to save a galaxy — or each other! 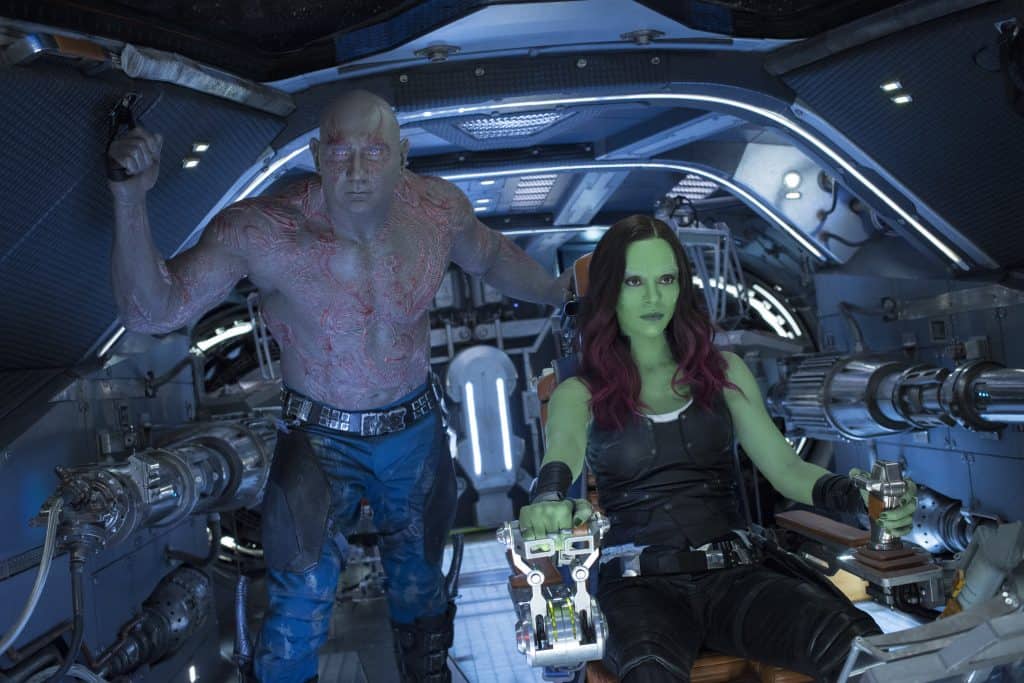 Here’s the trailer in case you want to watch it again. You know you want to.