You are here: Home / Travel / How We Travel Up the California Coast in Style
Tweet
Share1
Pin
1 Shares

How do we travel up the California coast?

We start with a filling, delicious breakfast at Sambo’s on the Beach in Santa Barbara. About two hours from the house here in the Inland Empire, we arrive hungry and hope the wait is short. Sambo’s is a popular cafe, facing the beach, and we love to eat outside where we can watch the people in the water. Boats, paddle boards, adventurous swimmers, it’s a sight to see, with the sun glistening on the waves and the clouds moving quickly in the breeze. 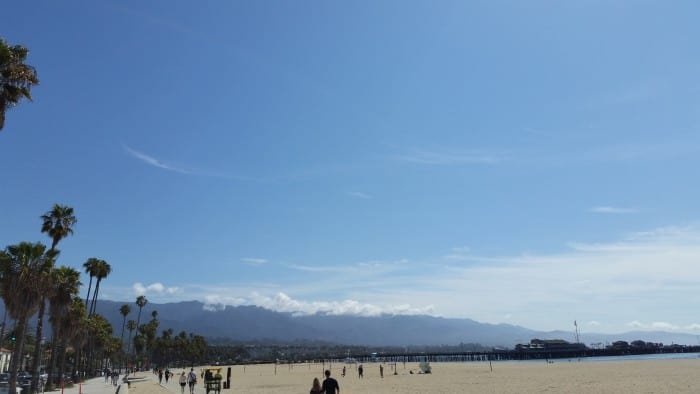 I am one of those foodies who loves to try new things all the time. What foodie isn’t, right? Sambo’s changes that up though, as we are creatures of habit. Crab Eggs Benedict. Every single time. The sauce is perfect and the crab cakes are amazing. Pair it with one of their jumbo cranberry mimosas and we’re set for a few hours…until we get to wine country. 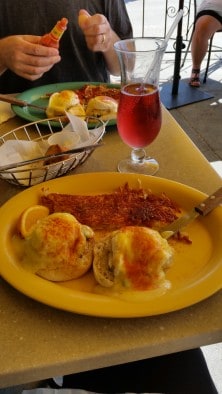 In between, we make the same stop every time, at a small cliffside park just a mile or two away from Sambo’s. Clean restrooms, benches, trails and views that make you happy. 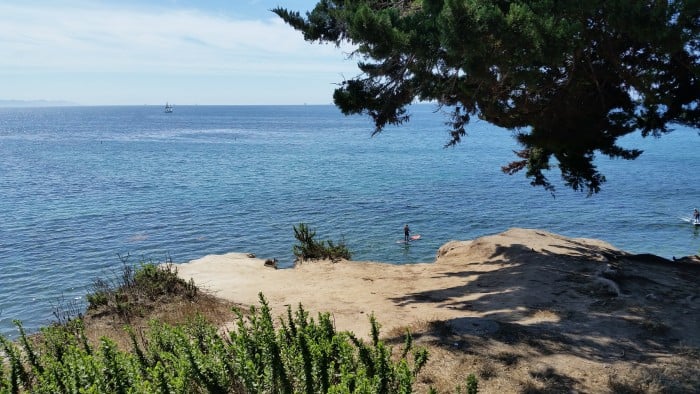 Add in some pretty flowers and the typical central California coast beachside trees and it’s beautiful. 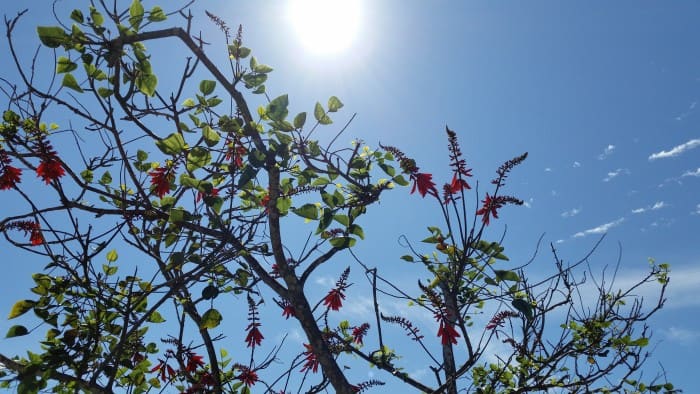 Next on the list is Laetitia Winery in Arroyo Grande. It’s the perfect place to take a break and stretch your legs, and not just at the tasting bar. They have some beautiful walking paths, trees in the shade and as the young woman who poured our wine said, clean restrooms. “Is this your bathroom stop?” We laughed and said well, yes, sort of, but it’s mainly our bocce ball stop. We play one or two games every time we visit. I usually win, but this time I didn’t. Pouty face. We did buy a bottle of their infamous Pinot Noir though; we knew we’d be hitting up other wineries, especially since we were staying at Holman Ranch, who makes one of the best pinots we’ve ever had, so we didn’t want to buy too many too early. (But really, is there ever such a thing as “too many” when it comes to wine? Unless you’re drinking and driving, that’s a definite “too many” and totally not what I was referring to. Don’t drink and drive.) 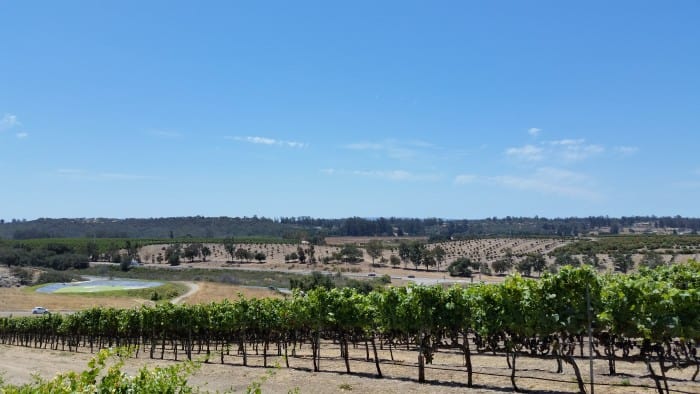 Then it’s up the coast. This time, we weren’t stopping in either one of our other favorite places to stay overnight, Paso Robles or Pismo Beach, but we were headed all the way to Carmel by the Sea to stay at Hofsas House. This meant we had more shoreline to see and the chance to take some pictures of Hearst Castle and the adjacent San Simeon Pier. If you haven’t visited that little park, put it on your map for your next trip. 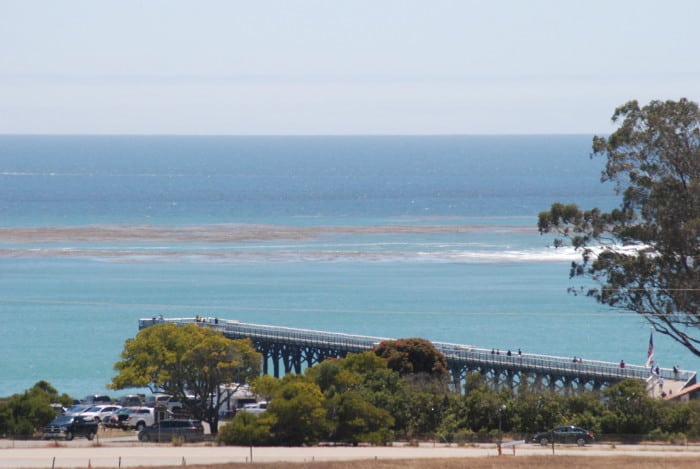 Clean restrooms (see the theme here?), beautiful views of waves crashing into rocks in a distance, sail boats, swimming and picnic areas with barbecues. We’ve been to Hearst Castle a few times so we didn’t take a tour this time (though there are several to choose from, so you can see different things each fisit) but we did enjoy the view from their parking lot. Cool and breezy and relaxing. I got this shot from the end of the pier, timed perfectly to get the spray on the rocks. 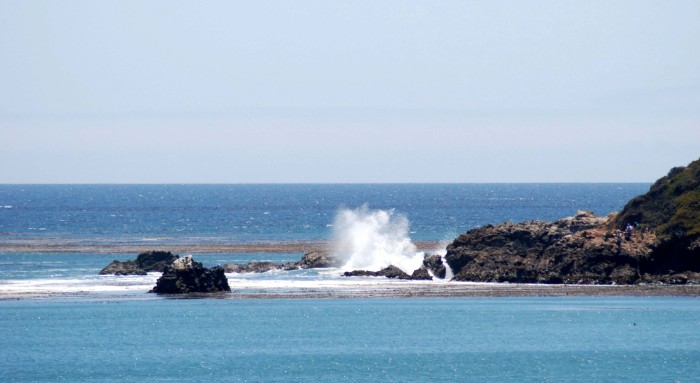 Our best decisions, beyond Sambo’s, the park and the winery, was stopping at the elephant seal viewing area north of San Simeon. We’d stopped a nature reserve coastal-side earlier, where I was able to get some cool pictures of sea lions resting on rocks and birds standing in the spray, and even an older fox that looked to be hunting casually for something to eat or do. 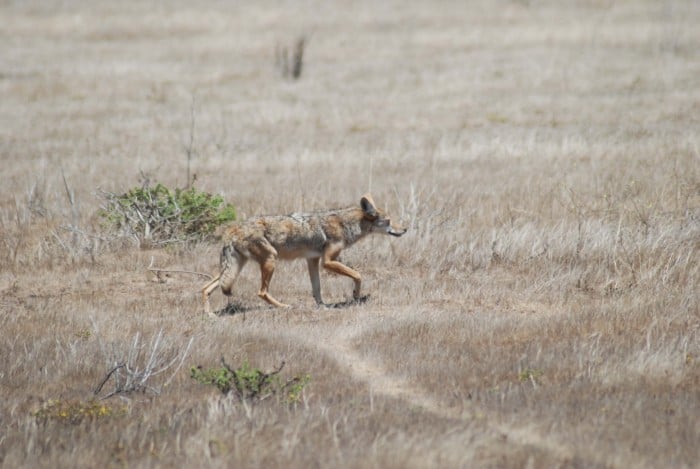 See all the different kinds of wildlife? 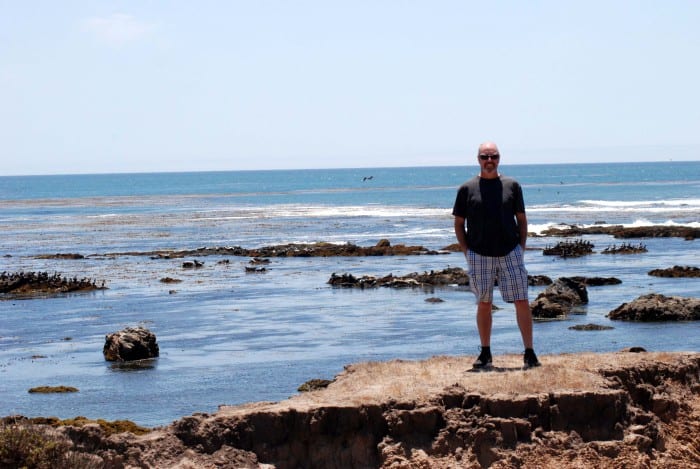 Capturing wildlife unexpectedly like that is always a highlight, but the elephant seals made the day. 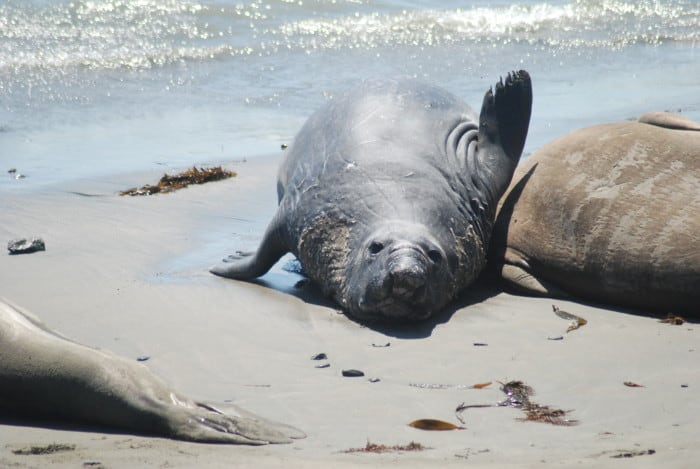 He was clearly waving at me.

Our son is obsessed with seals, sea lions and walruses, so we were excited to take photos to text him and show him later. The seals seemed to know this and I got some great shots of them looking right at me, playing in the water, fighting and laughing. (I’m going to assume it was laughter, as they looked distinctly happy as they blobbed along the sand and splashed each other in the water. And blobbed, that’s not a technical term but if you’ve ever seen a sea lion on land, you’ll know what I mean. They don’t walk, they don’t crawl…they blob.) 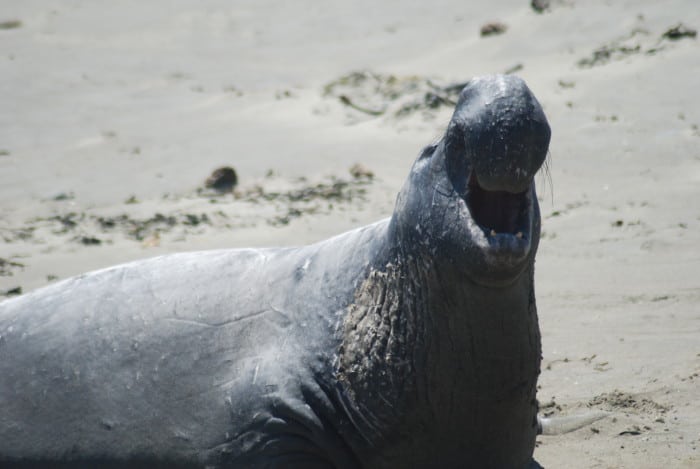 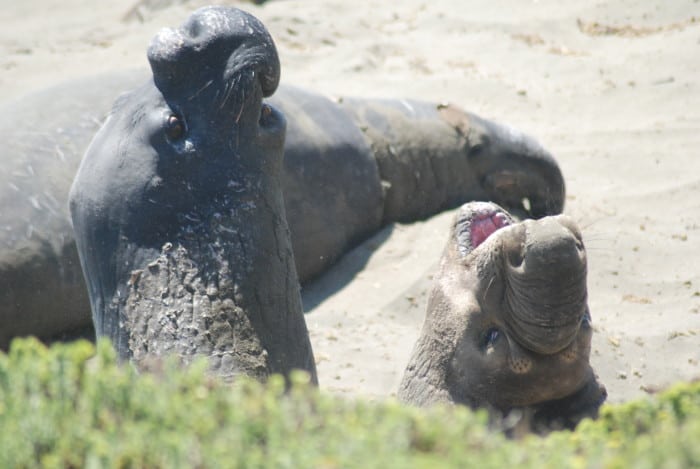 And these two were not on their best behavior. Their argument, probably over splashing sand on each other, was pretty loud. But entertaining.

One of our not-our-best decisions of the trip was taking the 1 up the coast through Big Sur, instead of the 101. Don’t get me wrong, it’s a beautiful drive and offers some of the prettiest sights of water and cliff and greenery in California, but you have to like curvy, winding roads way up high. Those roads don’t always move quickly as it is, but if you’re behind someone with a nervous stomach or uncomfortable driving — or someone erroneously towing a car on one of the silliest roads to do it ever — your drive can be really slow, so be ready. I was done about 20 minutes in and oh so thankful when we got to the other side. I have no pictures of this moment as I was looking to the right, the non-cliff side. Counting miles and bemoaning the fact that I had no cell service so I couldn’t watch the blue dot on my Google map get closer and closer to the end.

I’d go back in to camp at one of the many campgrounds nestled in the mountains, amongst the greenery and wildlife, but I’d head back down the 1 instead of coming from the south. Learn from me.

Luckily, Carmel by the Sea wasn’t too far beyond the other side of the 1. Traffic isn’t any faster there, but that’s by design. Carmel’s a picturesque small town on the shores, built back when streets didn’t need to be wide enough for semis and to this day, there are no street numbers on the buildings or street lights. (Plan accordingly when you walk around at night in residential zones or where you are unfamiliar.)
California’s a beautiful state, and it happens to be my favorite. I’ve lived all over, and am so glad to be back where we belong. We do pay a hefty cost to live amongst all this sun and natural grandeur, but it’s totally worth it.

Part two of our California coast trip, covering our stay in Carmel by the Sea, up shortly! (And that part of the trip was sponsored by Hofsas House, but the trip up the coast was our own. All photos are mine regardless, as are the opinions.)