You are here: Home / Travel / How Do Blimps Work? We Rode With Carnival Cruise!
Tweet
Share3
Pin
3 Shares

What’s it like to ride in a blimp? I used to wonder that myself! I would watch the airships fly over sporting events and outdoor venues, telling myself “Someday I’ll ride in a blimp.” Two weeks ago, Carnival Cruise made that possible when they invited me and my daughter to go for a ride in their new #ChooseFun blimp, in honor of the upcoming California cruise ship, the Panorama. Bucket list item, check! 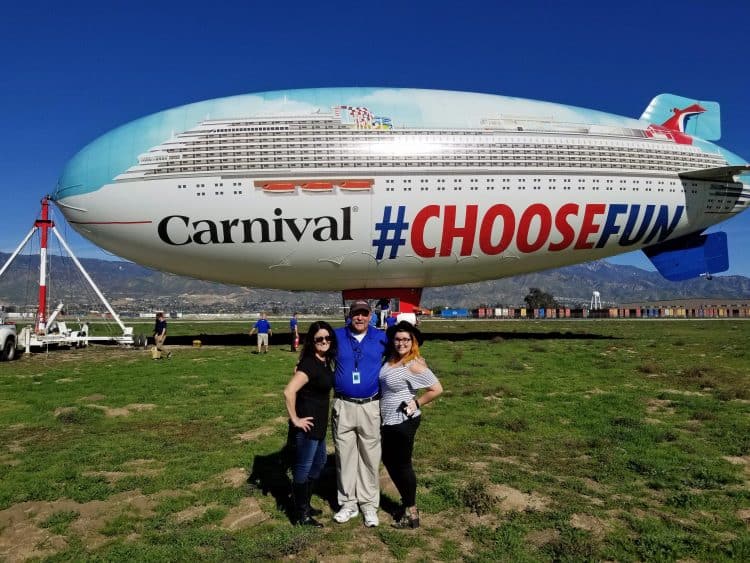 But how do blimps work?

I knew the basic science: the envelope (the big football-shape) contains helium, and it’s a fine balance between it and ‘heavy air,’ which takes the blimp higher and lower in the sky. Pressure of the helium changes as it gets higher in the sky, and when the airship lands, essentially anchors are used to keep it on the ground. There is so much more to piloting a blimp than I’d have ever imagined! 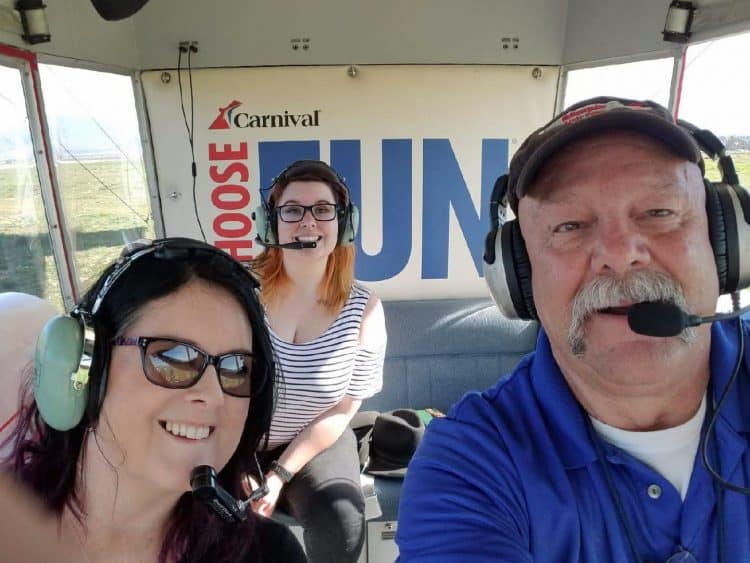 Look at this gear panel! Our pilot was Terry, and he has been piloting blimps for over 19 years. We knew we were in good hands with Terry, and he showed us the rudders (directed by pedals on the ground, much like gas and brake pedals), the elevators that make it go up and down (essentially wheels similar to those on wheelchairs, by the pilot’s seat) and various instruments that indicate height, if the airship is level, pressure, fuel gauge, and more. 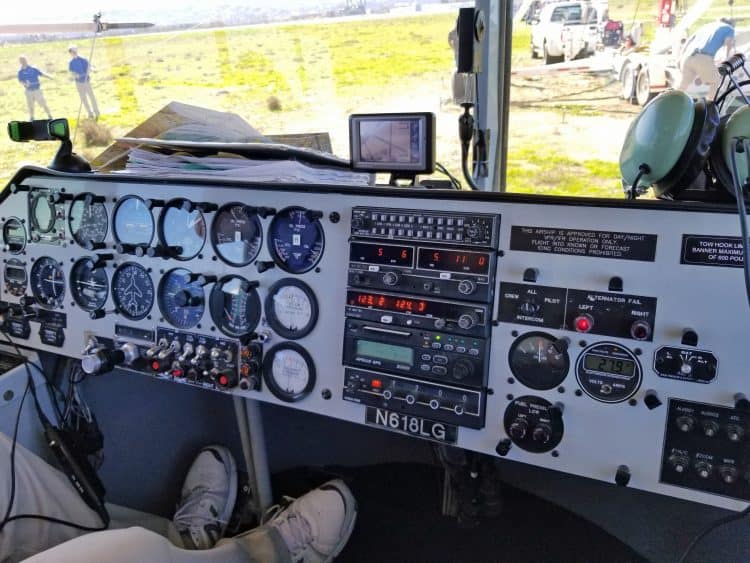 So much goes into taking off, flying and landing in a blimp, and it was all so fascinating! Thank you, Carnival Cruise, for inviting us on this media trip high into the skies over the Inland Empire area of Southern California. We met our host on a Saturday morning at San Bernardino Airport, a now closed airport that is now mainly a salvage yard. 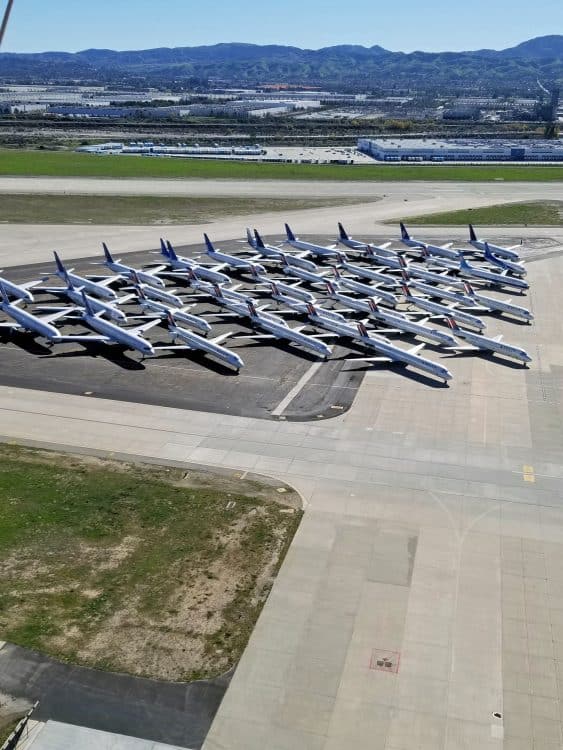 We took off on what was supposed to be a 15-20 minute flight, and we ended up getting an amazing 40 minutes or so up in the air! Those planes are all at the airport now! This view below is facing northwest-ish, with the dip in the middle being where the 15 freeway cuts through the Cajon Pass, and the snow is the back side of Wrightwood, where we just skied at Mountain High last week. My house is just at the base of those mountains in the far back on the left. 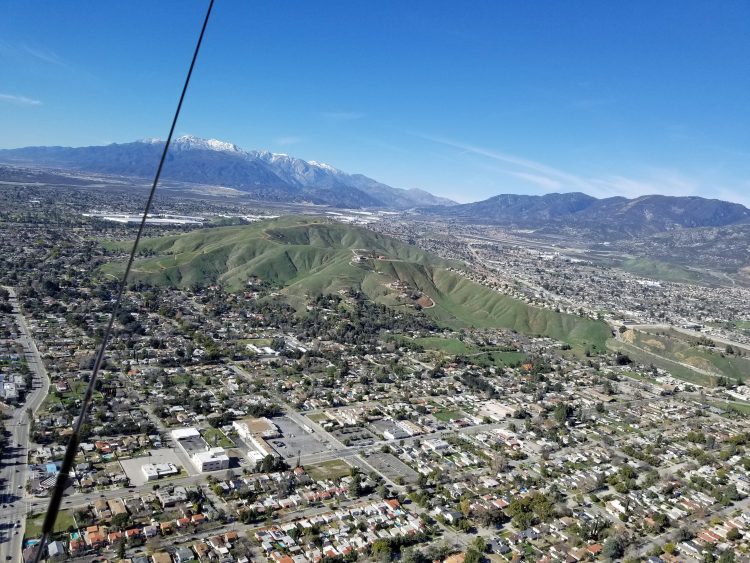 We honestly had no clue what to expect about a takeoff in an airship. Terry gave us a lot of info on what to expect before we stepped into the small gondola. There were two seats in front — one for the pilot, one for a passenger or co-pilot — and a bench behind that can hold two or three more people.

Takeoff is entirely not what I thought, as the pilot gets clearance from the tower to take off, and with help from the engines and crew on the grew, the blimp feels like it’s running until it gains enough speed to rise. 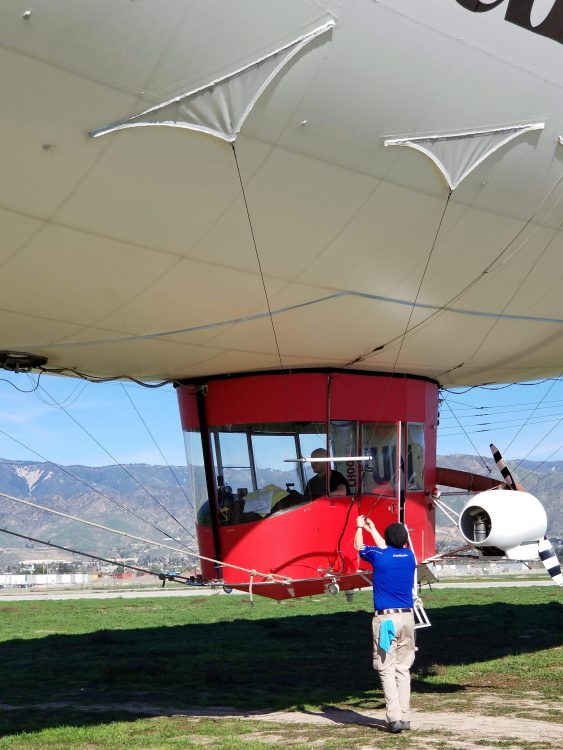 Within minutes, we were floating above our beautiful valley, with sky-capped mountains visible on two sides. Green hills, well-known buildings and even traffic on the freeways, we could see all over on our ride. 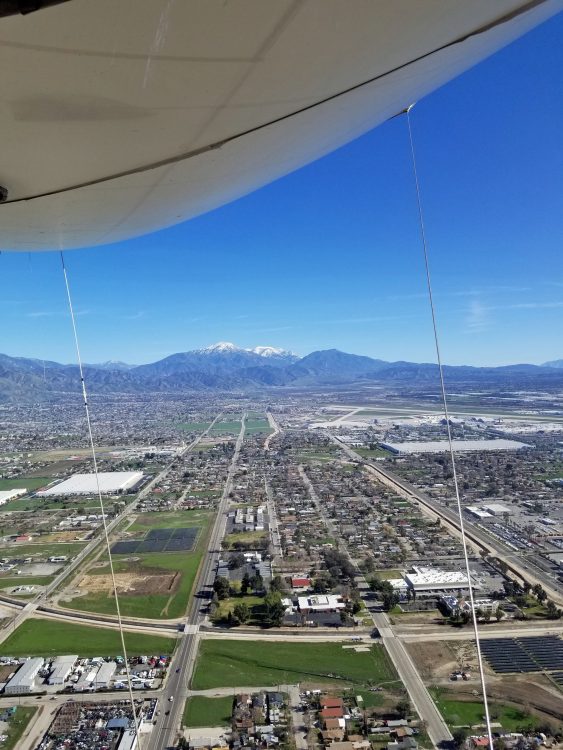 The pilot and passengers all wear headsets so we can communicate while flying, but half the time, my daughter was giggling and I was repeating wow, wow, this is amazing, and wow. My vocabulary just disappeared in the face of the experience.

This is what it looks like when landing in the airship. Watching the earth get closer and closer is one thing, but what caught our attention the most is the synchronized crew movements below, where we coast, somewhat, towards the crew until we are safely at a pace where they can step forward and grab onto the ropes. Then, we are connected to a mast until the next take-off, and more fuel can be added at this time. 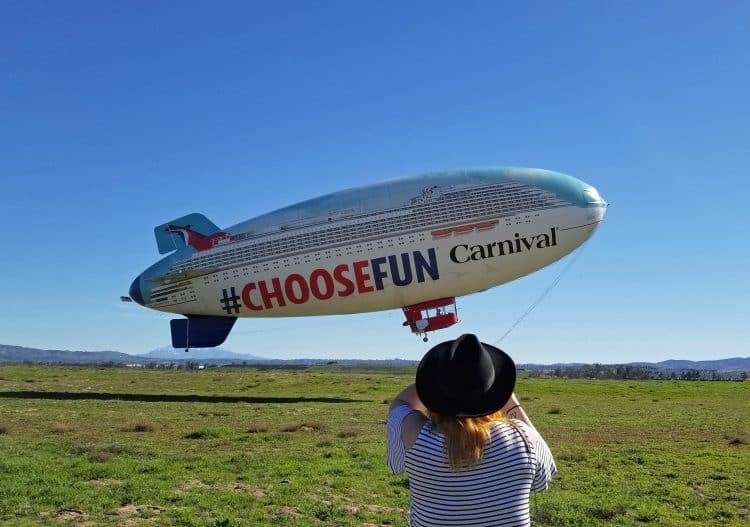 Once we landed, an experience I also documented on video above, we watched the airship take off on a five-hour flight around various parts of Southern California. The blimp is flown to be seen, so placing it over special events, parties, NASCAR races, crowds at the Santa Monica Pier and more are on the agenda while it’s here in the SoCal area.

Now when one of my kids or grandkids asks me “How do blimps work?” I know! Before, I’d have just said “hot air rises” and hoped they would take that answer.

It also flew over this year’s Rose Parade in Pasadena! (I had no clue back then what an amazing opportunity was soon coming my way!) With its colorful skin and slight humming sound, barely audible, the Choose Fun airship easily gets attention. 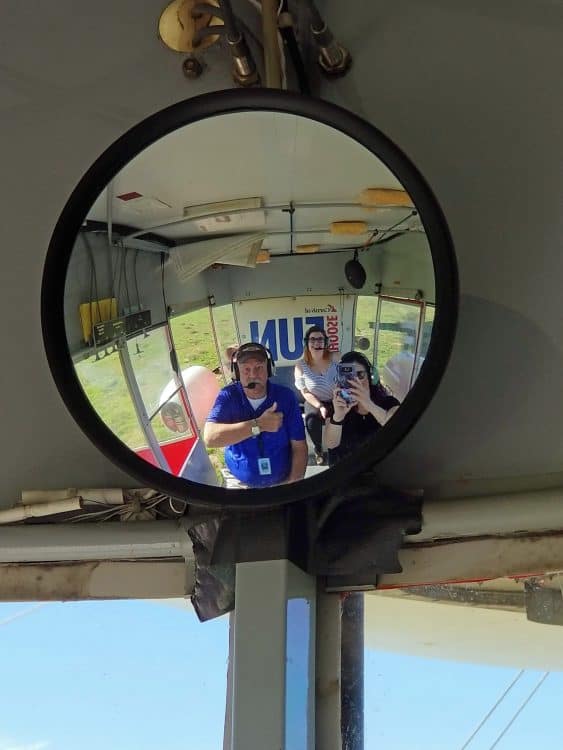 An hour or so after we returned home, I started getting texts from friends and family who knew we were on the blimp. Close to early evening, I was in my family room when I heard a familiar sound. We ran out the front door and there it was, the Carnival Cruise #ChooseFun airship directly over my house!

The 120′ #ChooseFun AirShip is here to help promote the upcoming debut of the Carnival Panorama, which takes its first California voyage from Long Beach in December. It will then be used for year-round seven-day voyages to the Mexican Riviera.

Need anymore persuasion to see YES if you’re asked to ride in an airship ever? Check out these views in this brief mid-flight video.

Carnival Cruise was founded back in 1972, and is part of a large family of companies owned by Carnival Corporation, which also includes Princess Cruises, Holland America Line and the Cunard Line. They are a proud sponsor of St. Jude’s Children’s Research Hospital, and in fact, if you take a picture of the blimp and post it on social media with the hashtag, #choosefun, Carnival will donate $2, up to a healthy $20,000!

I can’t wait until Carnival Cruise starts offering cruises from the beautiful West Coast. We’ve cruised before and are currently in the planning stages of a cruise to celebrate my son’s graduation from high school, before he heads off to college and I cry.

Thank you again, Carnival Cruise, Terry, Danny, Steve and the rest of the crew! I hope to see you all again!