You are here: Home / Entertainment / My visit to Titanic the Experience and Bodies the Exhibition
Tweet
Share43
Pin39
82 Shares

**Disclaimer: I was given a media pass to attend the exhibits on July 31, 2013, which was media day, before the exhibit was open to the public. While my admission was complimentary, the opinions and photos are my own.**

I have followed the Titanic news since I was young. Shipwrecks overall fascinate me, but nothing like the allure of the Titanic. The eeriness of the site, the sheer size of the ship, the history and mystery that shrouds it…it all sucks me in like nothing else of historical relevance. I was given the opportunity to attend the exhibits — something I would have gladly paid to do anyway — and literally jumped around a little, making the RV shake.

Embarrassing confession aside…these exhibits are amazing. They are SO amazing, in fact, that I was at a loss for words as I walked around with my tour guides, Margaret “Molly” Brown, and Frederick, a shipsman. (I believe he was a stoker, Irish accent and appropriate attire and all.) I could only say “wow” and “amazing” over and over and over. I probably left indelible marks on Molly and Frederick by my inability to have a vocabulary worthy enough to seem like a writer. Not my typical conversationalist that day, I wasn’t, that’s a promise. (Usually, I talk too much. Ask people who know me. It’s okay, it won’t hurt my feelings.)

I took far too many pictures to share in one post, but I will share enough to give you a general idea of what to expect. In short, GO. You will not be disappointed. You will undoubtedly leave with a sense of awe and with a million facts in your mind about the body, as I still can picture what a kidney stone looks like and how muscles stretch when you are running. And holding an actual real human brain in my hand? Priceless! That was right up there with TOUCHING THE TITANIC.

I know I’m yelling, but it’s that big of a deal: when, not if, you go to the exhibits, you will not only have the chance to hold a brain, but you can TOUCH THE TITANIC. I about melted on the spot.

I stopped my guide and tweeted about it right then and there, and took pictures of my own hand touching it. And of course, without my hand in the way so as not to obscure the MOST AMAZING THING I COULD EVER TOUCH.

As I went on a media day, it was still referred to as a ‘hardhat tour.’ This was not only cool because it was not crowded and I got to chat with my guides, but I was fortunate enough to watch them installing exhibits, tweaking lights and setting up sound systems. I walked the exhibits leisurely enough to thoroughly enjoy each portion and take all the photos I wanted without anyone in my way. And did I say I learned a lot?

On with the photos, what you really want to see! 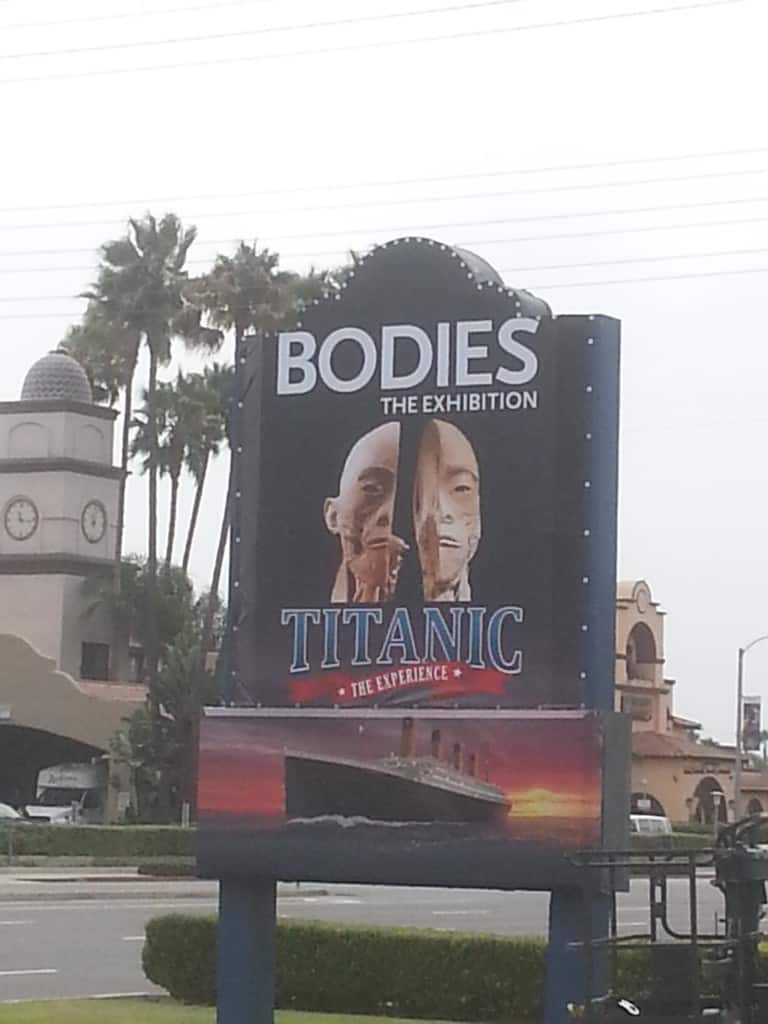 If you’re familiar with Buena Park, California at all, you probably know of Beach Boulevard, home of Knott’s Berry Farm and Medieval Times. The Titanic and Bodies exhibits are now housed in the old Movieland Wax Museum building, which I happened to love as a child and fondly remember the scene where you walk through the underbelly of a ship modeled after the Poseidon Adventure. (See the theme here? I truly do love shipwrecks.) 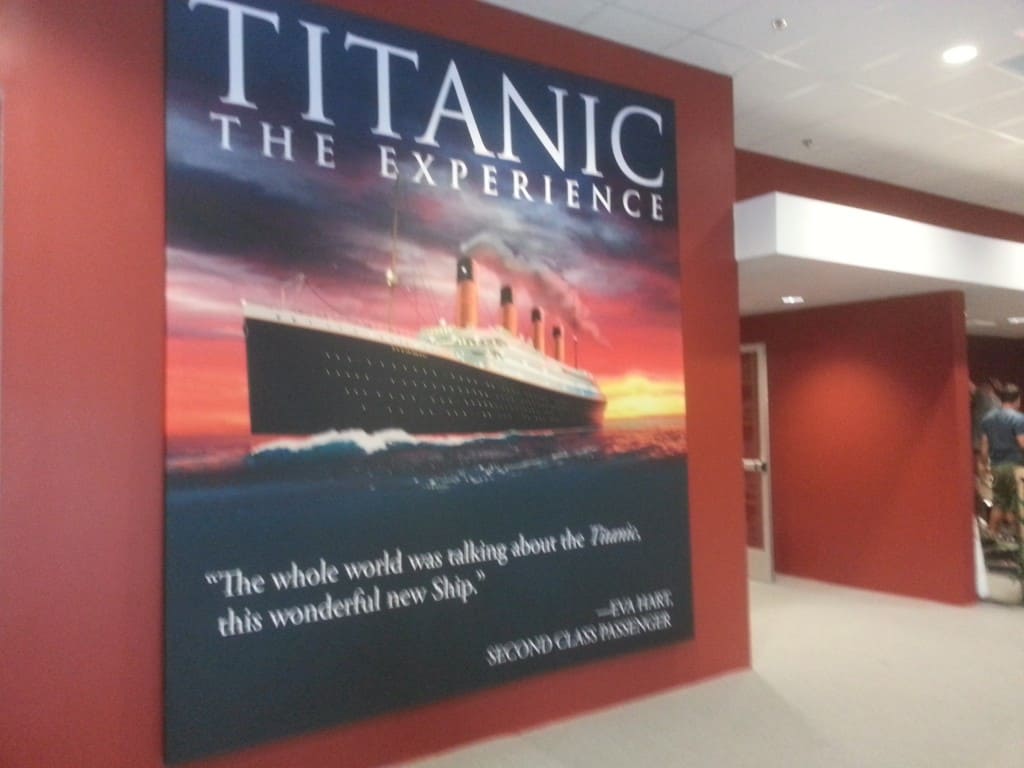 Oh how I wish I had noticed then that it was blurry…anyway, moving on.. 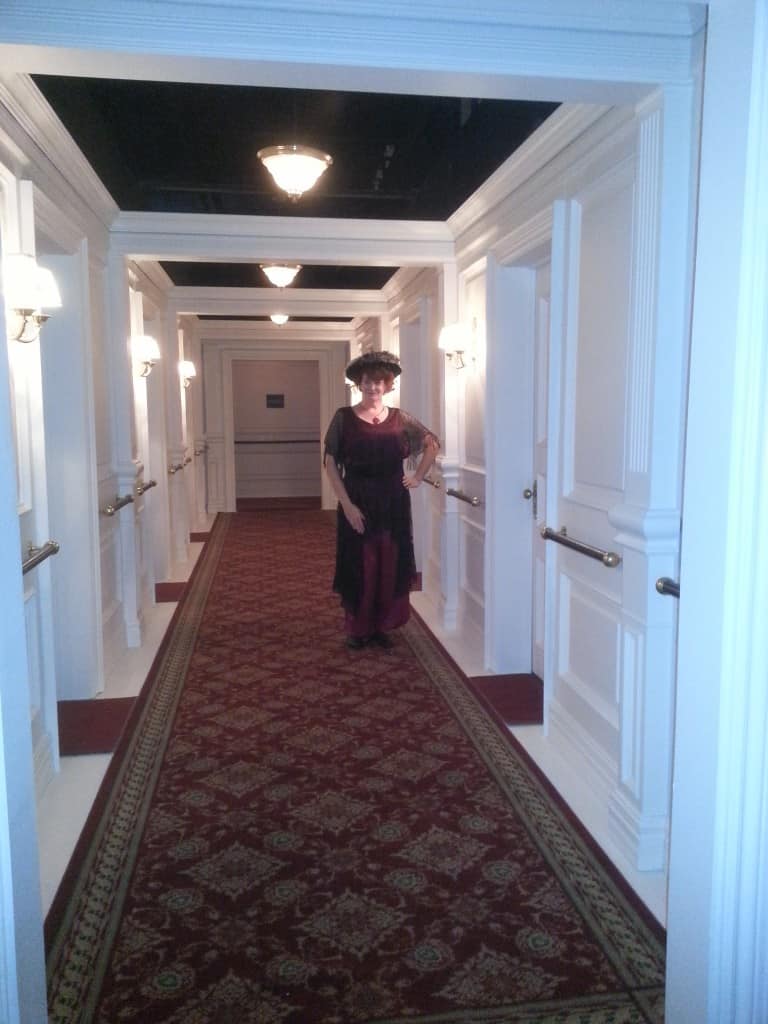 A tour down the first-class cabin hallway of the Titanic, along with your very own Margaret “Molly” Brown, looking beautiful as ever. 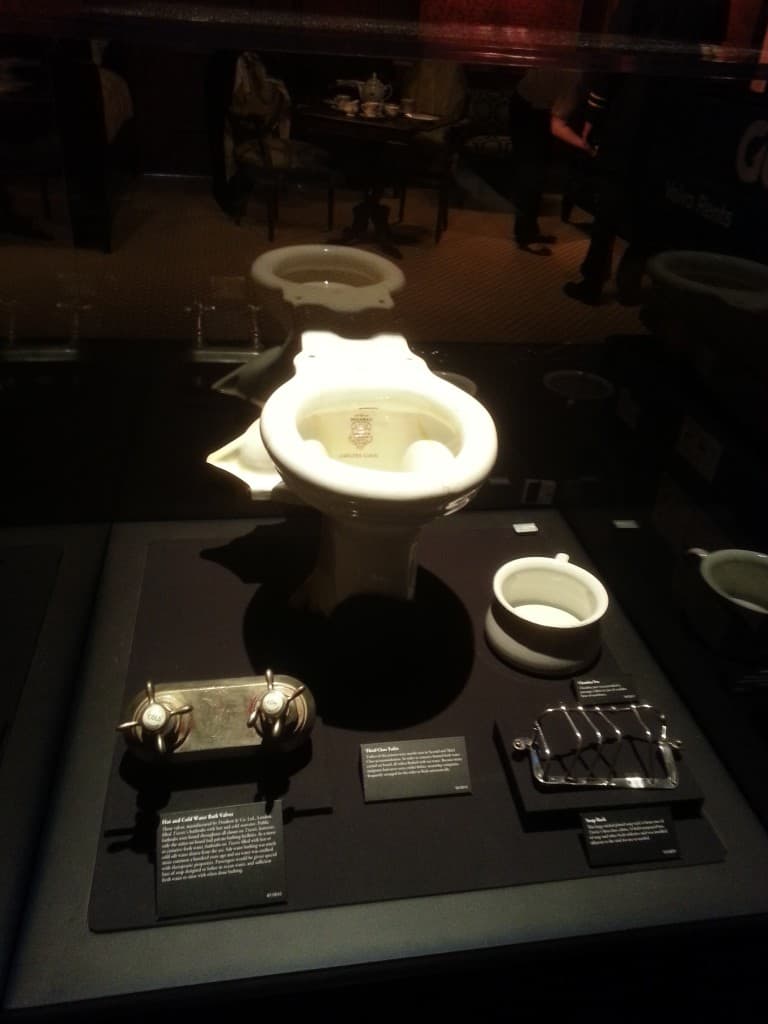 Oh, yes, I did. They had bathrooms on the Titanic, after all. There’s not a single piece of history here that wasn’t fascinating to picture being a part of the life of the passengers that fateful trip.

Frederick showing me his quarters below-deck. 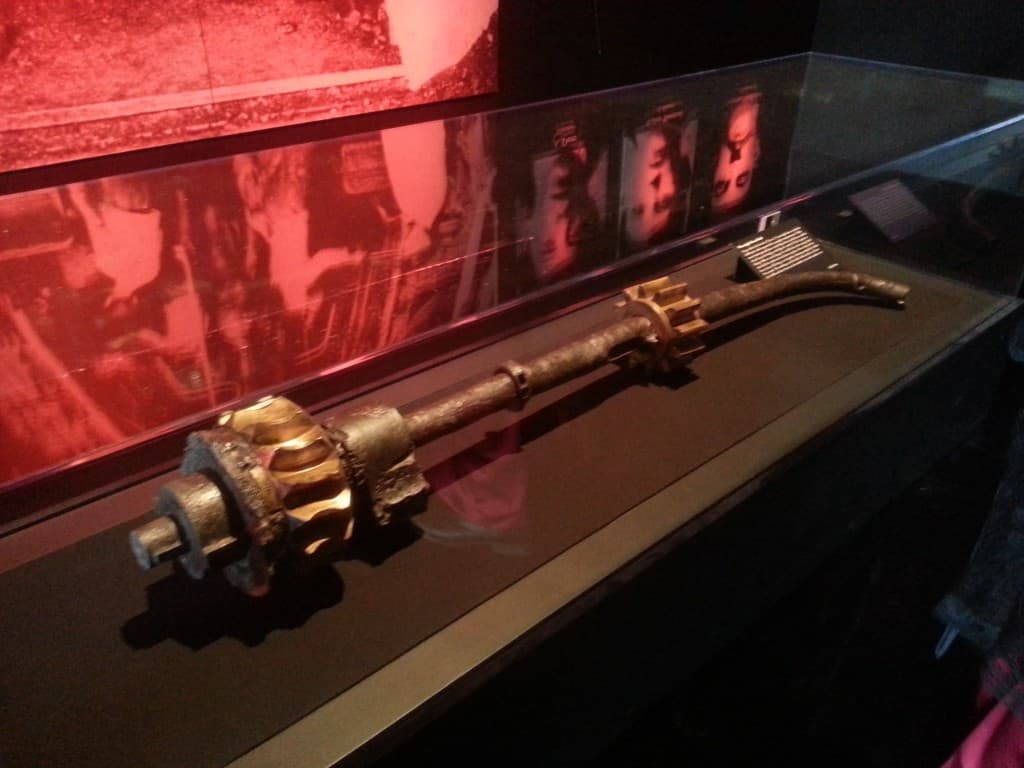 This piece stopped me in my tracks. It was part of one of the watertight door assembly, possibly first-class cabin area. You can see how mangled it is. Five compartments flooded that awful night, and there’s talk that if only four had flooded, if the doors had been at the proper levels of closure, the ship may not have sank. 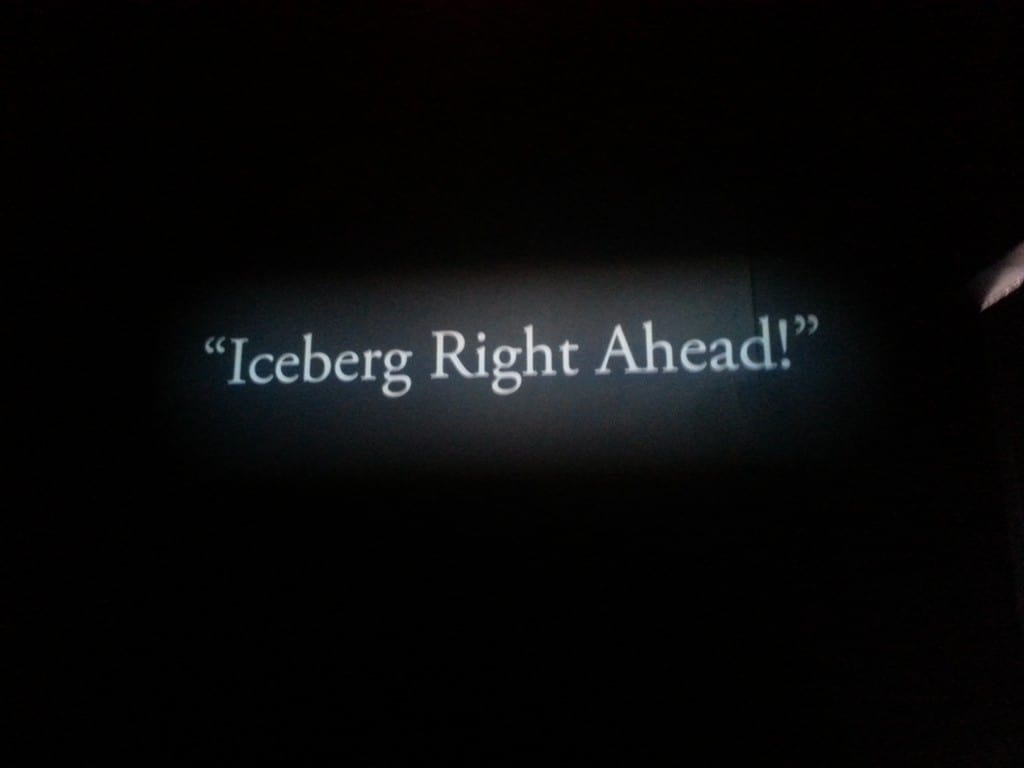 No words needed. SO chilling. 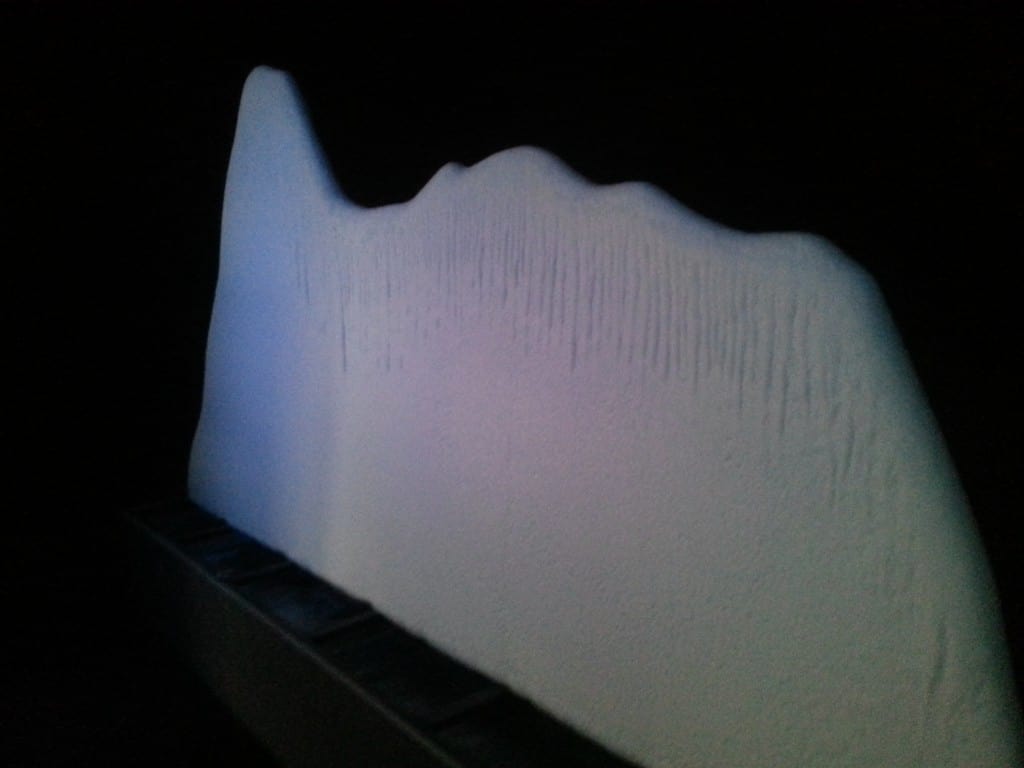 And there it is! It’s all at the same temperature of the water that day, and the creepy part is that as you just get remotely close to this very tiny replica of the monstrous berg that took down the Titanic, you can feel the chill. To touch it leaves no doubt as to why people died of hypothermia so quickly. (And it reminded me of why deep, dark water at night is so scary.) Did you know that there were no binoculars in the crow’s nest that night, but even if there had been, it may not have helped? If they had hit the iceberg dead-on, instead of turning at the last minute, there’s a possibility they’d have only been damaged, but not to the point of catastrophic loss as happened instead. 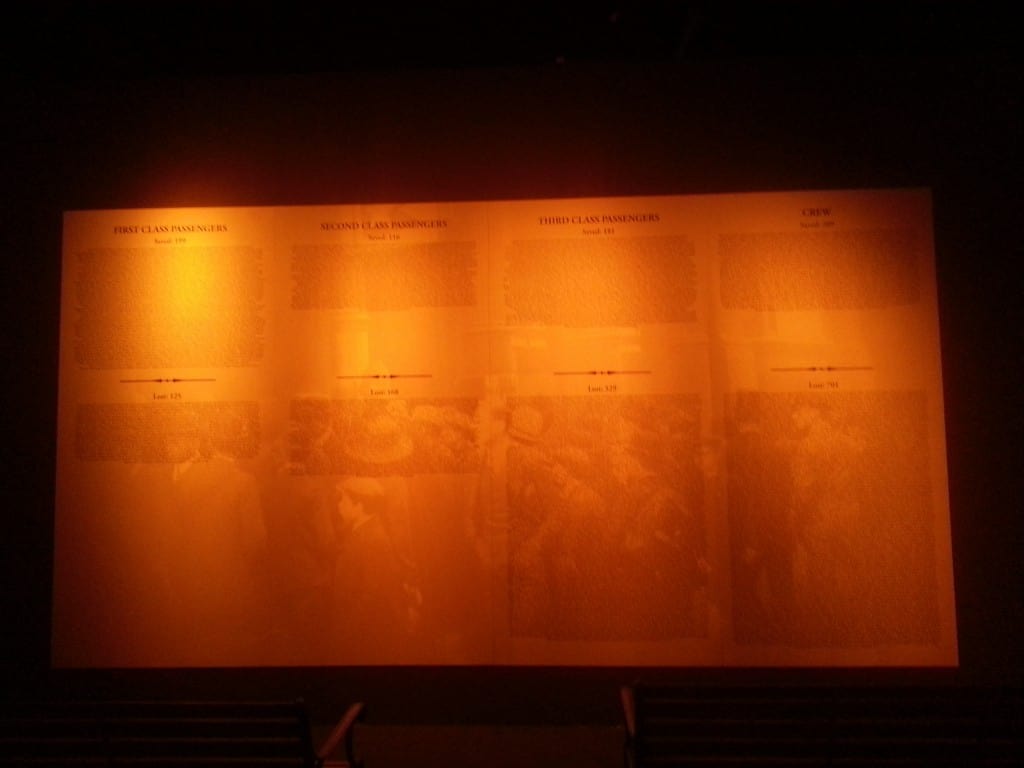 The wall of Titanic passengers, broken down by class, with the survivors being listed on top, and those who didn’t make it, on the bottom. 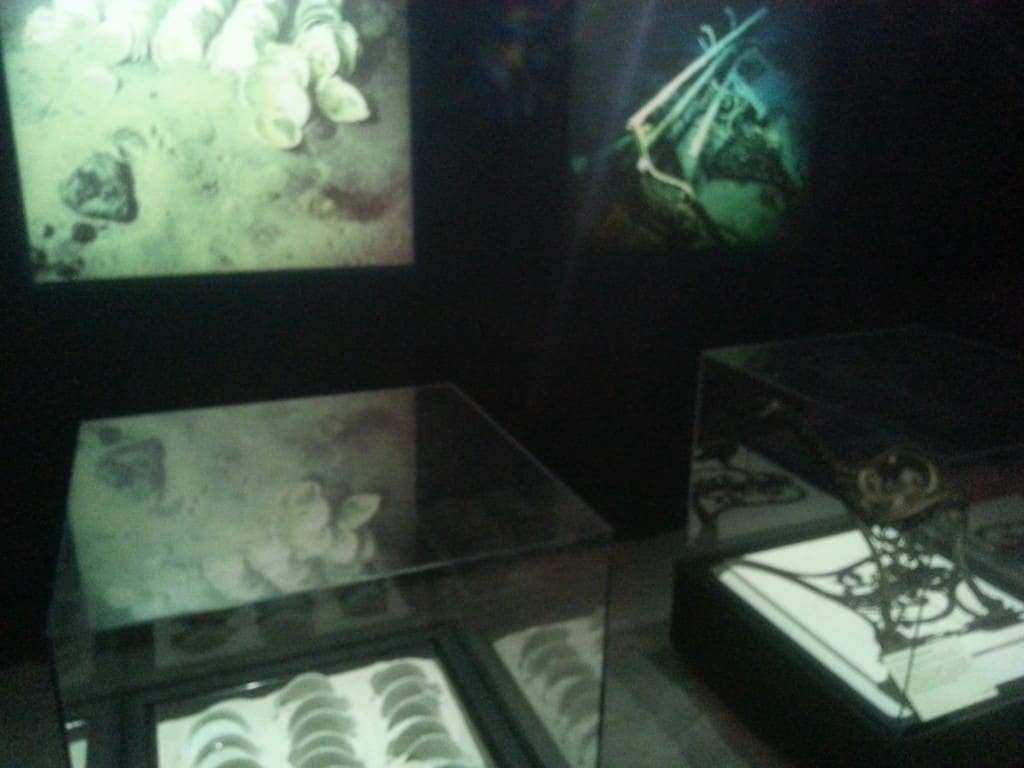 This picture doesn’t do the exhibit justice, but you can see the actual pieces excavated from the wreckage below pictures of how they were found on the ocean floor. Did you know that nothing can be taken from the site unless it is fully disengaged from the ship itself? I vote YAY on that, as the ship should be respected as the gravesite that it is. Such loss and tragedy, such sad stories.

The piece de resistance? Yes, you know it, the piece of Titanic that I touched. I TOUCHED THE TITANIC. 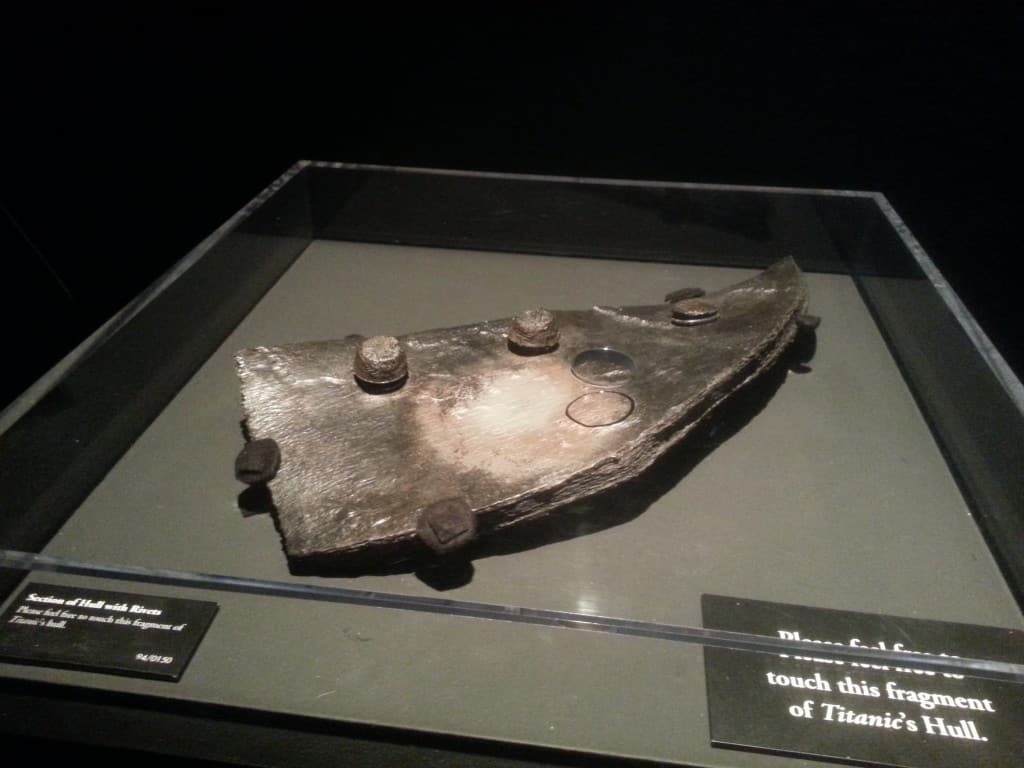 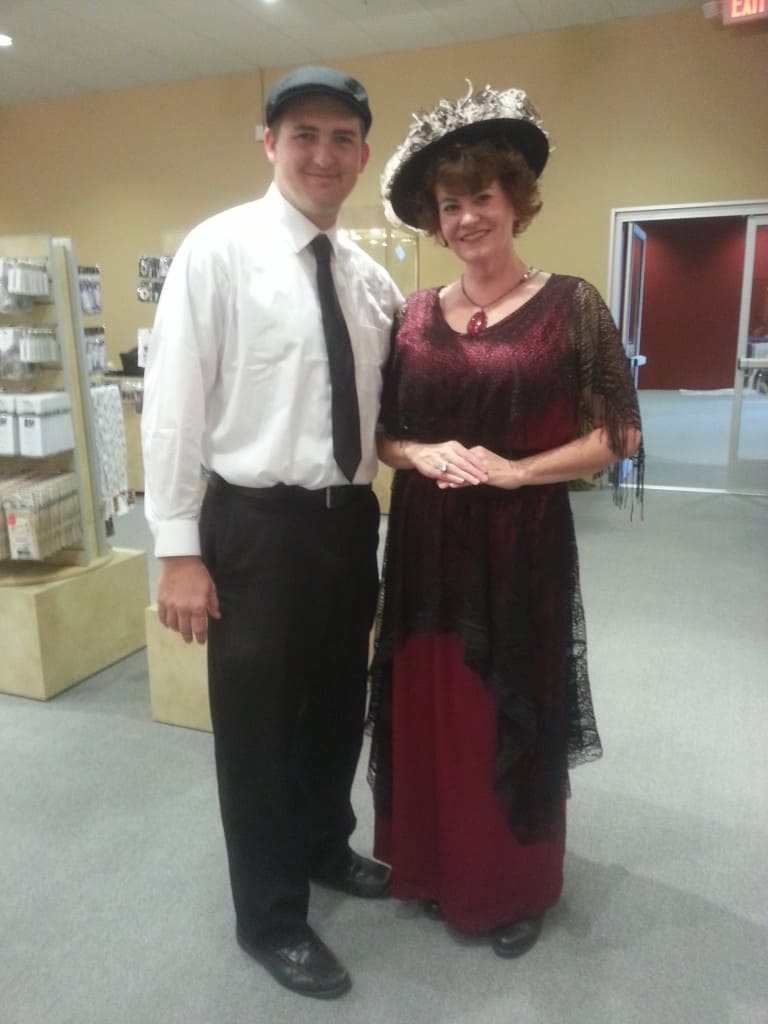 And of course, Frederick and Margaret, the two best tour guides ever! Thank you so much for your patience and humor and wit and facts, you made the tour!

Onto Bodies the Exhibit… 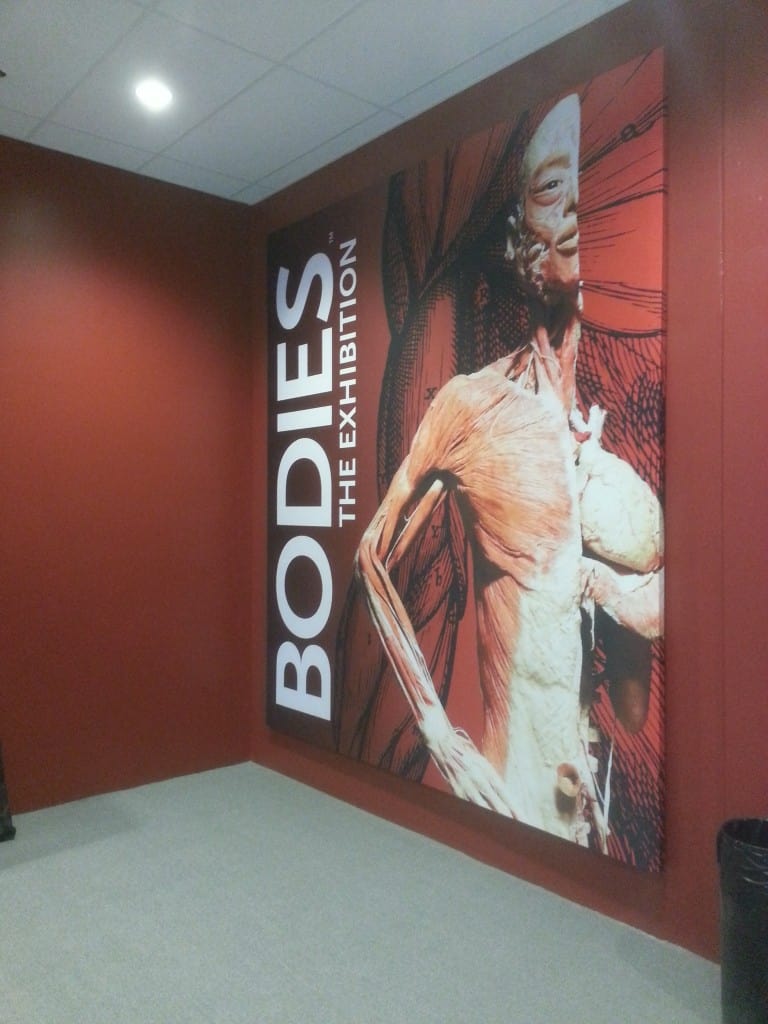 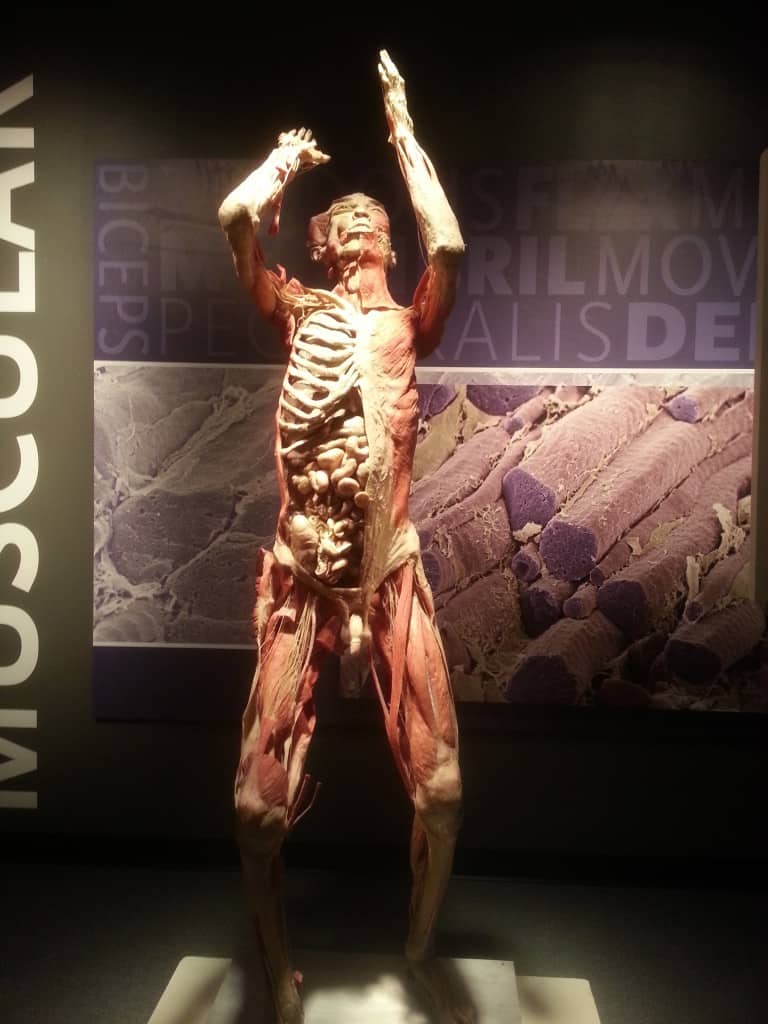 ALL real. ALL legit, real bodies that have been preserved in such a way as to maintain their true likeness. I thought anatomy class in college, working on cadavers, was so cool, and then I saw this and class, sorry, you pale in comparison.

Before I go further, I have to share that I had the distinct pleasure of meeting Dr. Roy Glover, the medical director of the exhibit. What a fascinating conversation we had! I shared a little bit about why a few of the exhibits meant so much to me, and we had quite the talk about the human body and why it works like it does. Thank you, Dr. Glover! 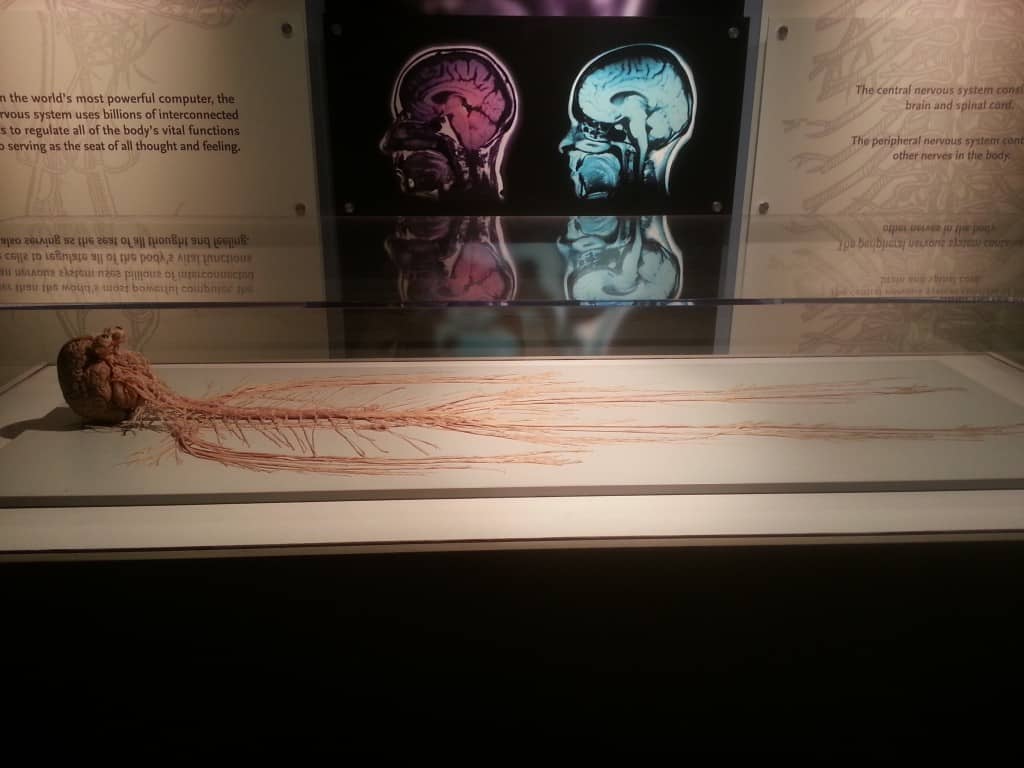 This is an actual set (is that what I should refer to it as?) of a spinal column, brain and the nerves. 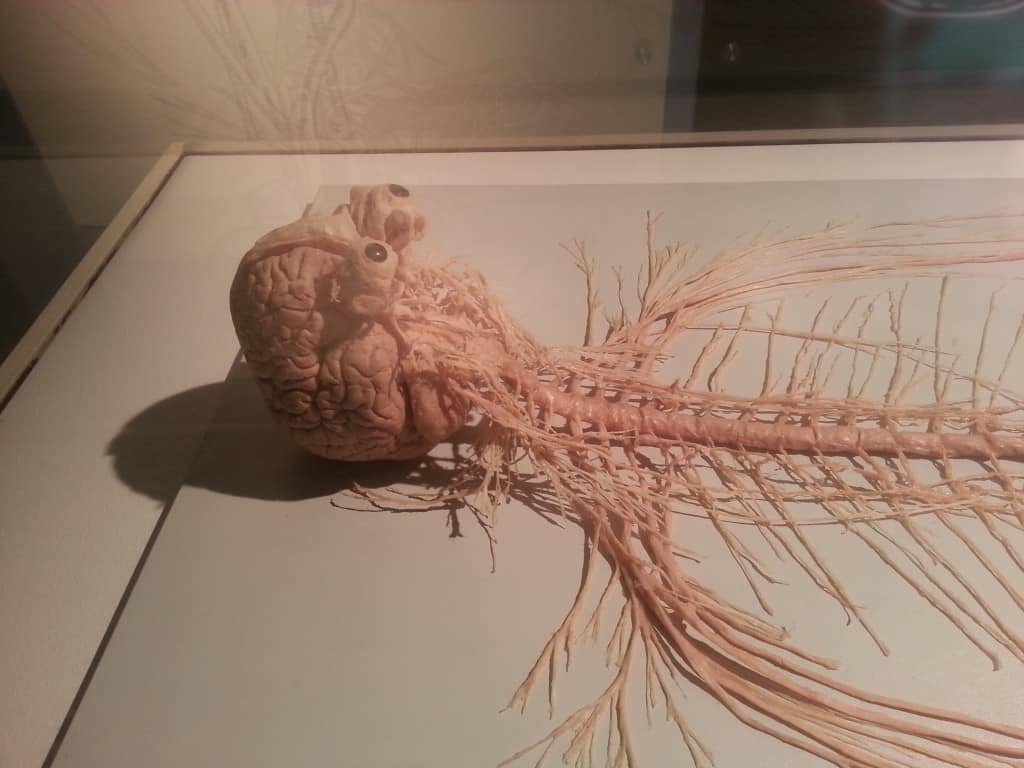 You know you wanted to see it up close, especially the eyes. Doesn’t it make you think of your whole body in a different way? I left with such a newfound respect for my muscles and nervous system and everything! 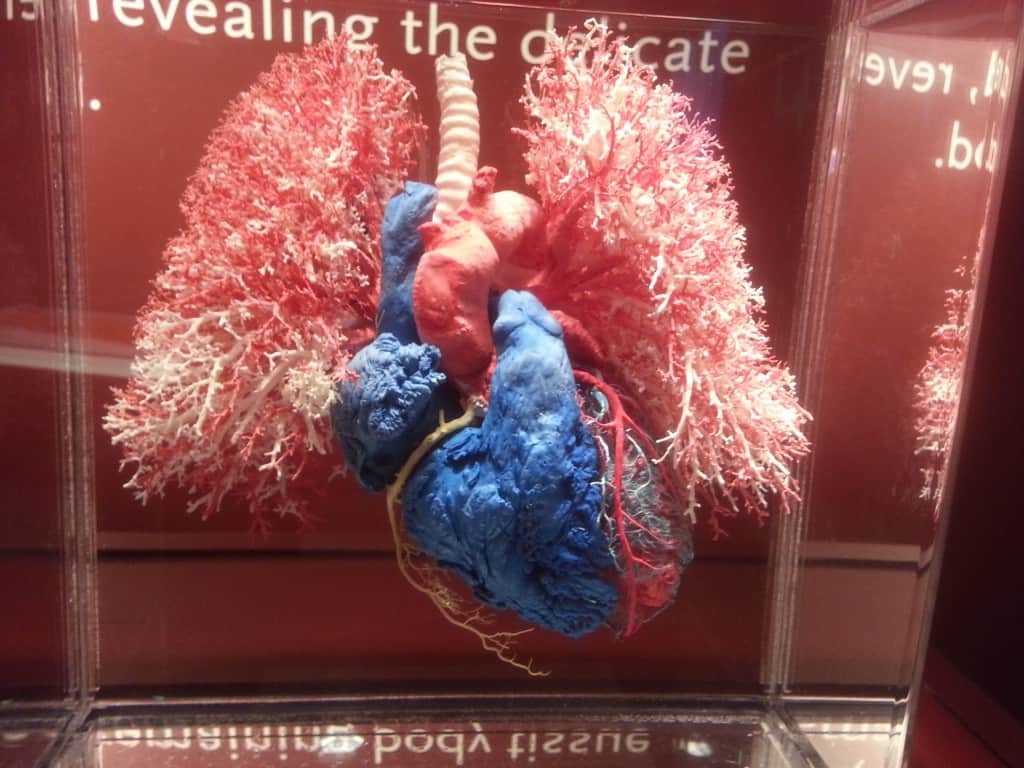 And those…lungs. I was particularly interested in how they color-tinged various systems so you can differentiate. 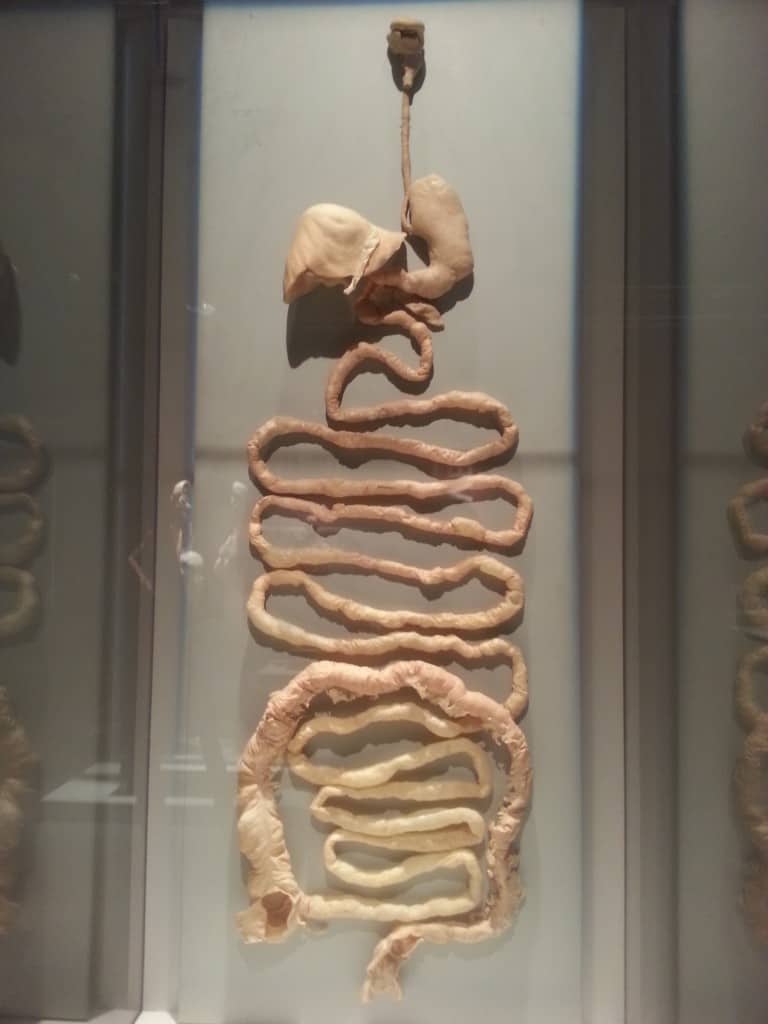 And that, ladies, is your intestinal system in all it’s glory. Explains a lot, doesn’t it? 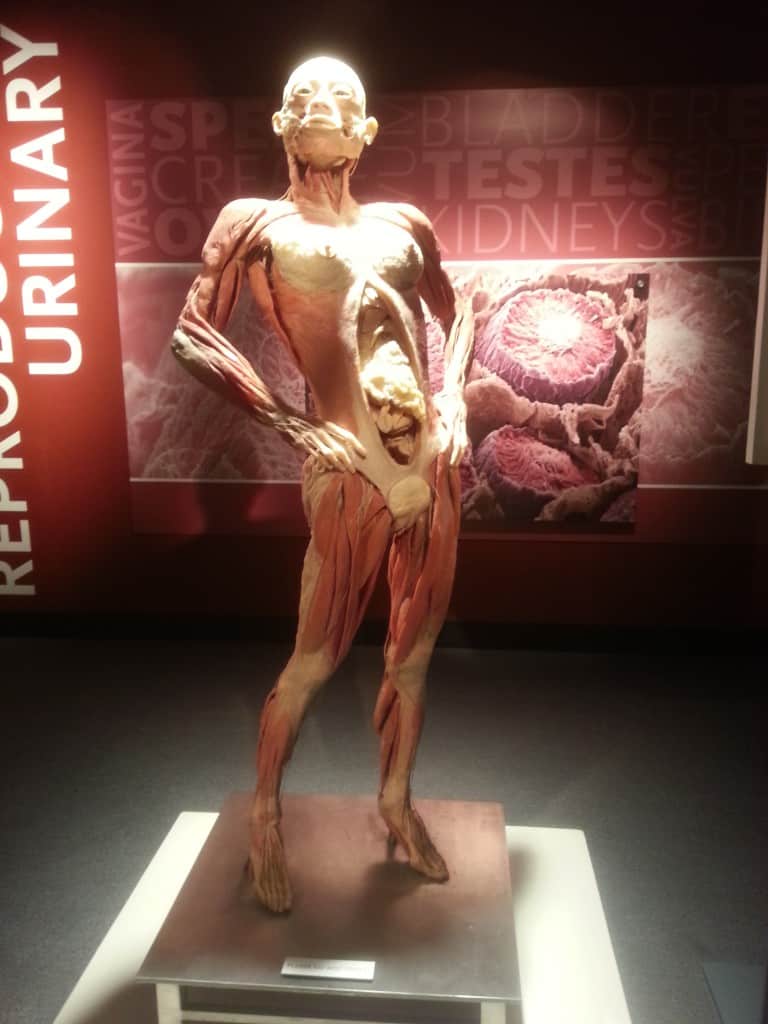 I couldn’t get enough of the poses! Picture us standing there, posing for a selfie, heels and all..there you have it. So interesting. 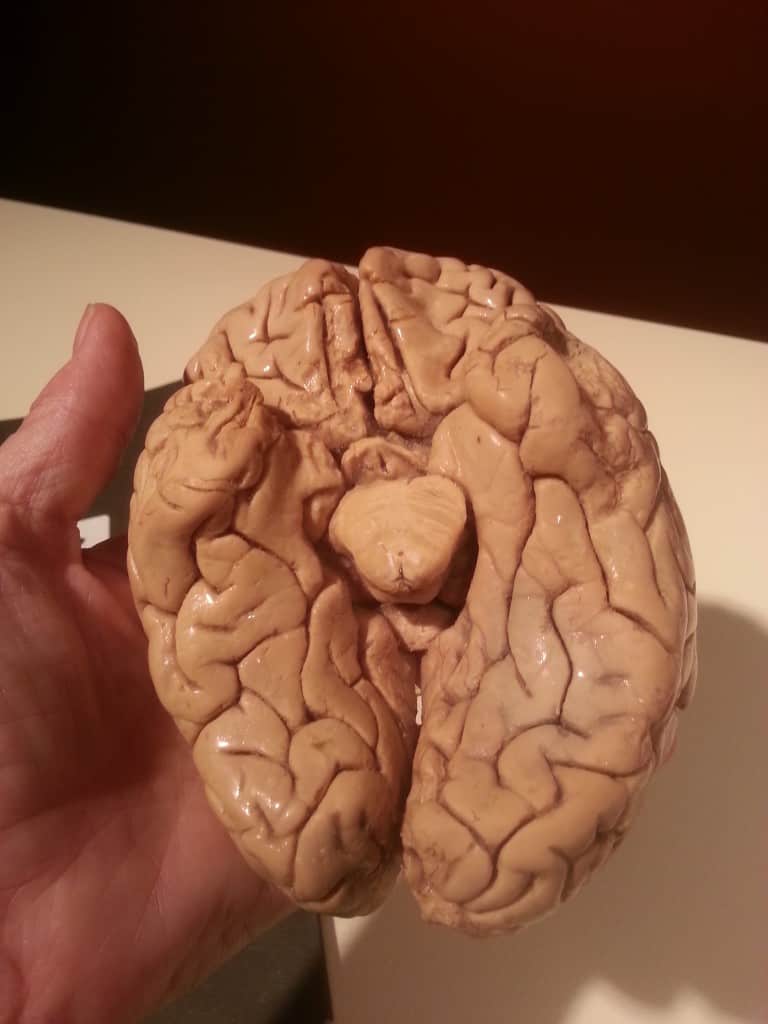 Whoa. That’s all I can say. Such an experience.

You can also follow them on Twitter at @RMS_Titanic and @BodiesExhibit. Ticket prices are listed in this post, lest I make this one too long! The giveaway mentioned in that post is over, but I also linked to a great video of the exhibit.

Don’t miss out, this exhibit’s great for kids and adults and well worth the time — enjoy!!