You are here: Home / Lifestyle / Mondays Suck….When You Have One of THOSE Days
Tweet
Share
Pin
0 Shares

Right now I’m smack in the middle of catching up on processing 500+ photographs I took on a recent press trip. It’s a task I normally love, because I enjoy the memories that pop up when I see each scene. Today though, I’m having a tough time enjoying it and my eyes are screaming at me to stop. (So what do I do? Run over here and tell you about it, further tiring my eyes.)

Settle in, I’m going to tell you about my day, one of THOSE days. 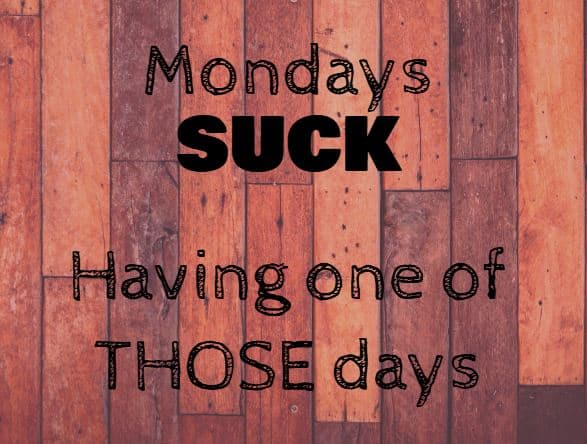 Today hates me. It’s a Monday, so I know a lot of us are having a bad case of Monday-itis, but seriously, this day has it in for me.

Do you ever have one of those days that are so weird that you know if you tell people about it, they won’t believe it? Yeah, that’s today. Here I go anyway.

1:30 woke up, wasn’t sure why but I learned later we’d had another aftershock from a midnight earthquake I hadn’t felt. That’s how tired I was, I never sleep through quakes. Quakes freak me out, despite a few decades of experiencing them. I expect one day to possibly stop breathing over panic from anything 5.0 and beyond.

1:45, heard a car racing down the main drag outside of the immediate area. Not the first time by any means, but I was grumbling to myself when I heard this horrible crash sound. Then I heard more tires and what sounded like a car speeding away. Then lots of sirens.

As I lay there trying to get back to sleep and hoping no one was hurt badly, we have another quake. We play a game, if you can call it that, trying to see who can most accurately guess the magnitude and epicenter. Proudly, I was dead-on with my guess of 3.4. It wasn’t a bad quake, but we keep hearing that California’s due for a big one so my ‘blah, that was creepy, glad it’s over’ fears are now replaced with ‘OMG IS THIS A PRECURSOR TO THE BIG ONE?’

I then laid in bed wondering about the value of earthquake insurance and if my car would get dented if holiday decoration bins tip over and land on it, and would that be covered under car insurance if it was caused by an earthquake? Do cars need earthquake coverage? Do I have too many holiday decorations? Which door frame do I hide in during the big one? At least I’m in pajamas that are presentable should I have to open the front door….

Before I knew it, it was 3:45pm and I was getting woken up to take the husband to the airport for his Directors’ work trip to NYC. Grumble grumble, but I was back in bed at 4:30…not sleeping again until around 645am, sitting upright watching TV with my P.F. Chang’s leftover container empty on my nightstand. Yum.

Then I hear beep beep beeeeeeeep BEEP. What now? Is it a dream? No. Power’s off. Okay, whatever, it’ll be in on a few minutes. Our neighbor called a few minutes later to tell me that no, it was going to be another 1.5 hour or so. Okay, not so bad.

Fast-forward to not enough email notification alerts and way too many visits to the power company app and the next time for completion of repair is 6pm.

How do I work without wi-fi? (I did try, I had it in my head that I could at least work until the laptop battery died…but it didn’t occur to me that the wi-fi is powered by electricity, too.) What about our food in our refrigerators and freezer? And then the wine fridges??

It didn’t occur to me at first that my car is in a garage behind an automatic garage door opener. Sigh.

Yes, I know you can manually disengage but a) I’m only 5’5″ and b) I can’t reach over my very fat Challenger to disengage the cord.

Then things got desperate. I started doing those chores I’d put off for weeks. Throwing away old magazines. Cleaning up my press shelf so my new camera and equipment is safely stowed without taking up every square inch of counter space in the upstairs hallway. Sorting through blog swag and product so I can see that shelf bottom, too.

Before I knew it, the power was back on. Then I was able to sign into my email, as my cellphone battery was only at 27% because I’d left my phone unplugged at 345am when I went to the airport and saw that the CPA we used to file our taxes this year had made another mistake. This one meant I was out-of-pocket even more money. Temporarily, but still …

To escape that ridiculous tax nightmare, I went to get groceries. Power’s back on, why not explore the new store now that the power’s on and I can safely open my refrigerator? It’s 94 here today so I didn’t want to leave at all earlier as I needed to leave the doors/windows open so the dogs at least had some breeze and cooler air.

Before I leave, gotta make a potty pit stop. What’s that sound? Please tell me that’s not…why yes, of course, yes, it’s  badly clogged and rising. And my bathroom ridiculously has a carpet floor. I can’t even muster up the fuss I normally would have. I walk away since I can’t stop it and need to tackle it when there’s room to use the plunger without making it worse.

I go shopping, where someone’s unruly kids who were literally ALL OVER THE STORE while mom paid zero attention, ran over my feet playing “who can find the broccoli first.” Get home, sushi rolls from the new store’s legit sushi counter, and push the garage door opener button.

Nothing. Keep pushing, because the husband’s remote opener isn’t as sharp as mine is. (And I’m in his car since I can’t get mine out.) Nothing. Other neighbor comes over, “power’s out again.”

OM freaking no way G not again? Shlep the groceries around the side of the house, including the freezer items that desperately need to get refrozen fast, and then…THEN…the power comes back on.

Toilet was fine after one plunge, a/c was on and I misread the CPA’s email, thinking that yay, she’s helping us out and fixing her mistake. Nope, but she’s willing to do it for free for us NEXT YEAR. Like I’m going to return there next year?? The first mistake almost cost us $1900 MORE in error, and this mistake is a misfiled return costing me another $300.

This kind of day is why day drinking became a thing.

Email CPA that no, this is not an okay solution. Learn that the transformer that caused the outage was from a high-speed chase with a car thief and the police. The thief got away, left the car on the transformer, explaining the police that kept driving past the house all morning…as I stood on the balcony trying to stay cool. I mean, what else did I have to do?

I’m now working on the photos again and writing the content for my press trip. I’m trying to decide when I want to take my hot bubble bath, if I can still squeeze in a six-mile run and if I want to take the whole bottle of wine into the tub with me.

On a good note, the magazine stack is much smaller. The blogger shelf is much neater and I found a few surprises in there. (Things that I’d already written about, to be clear.) The photo gear shelf is pretty spiffy and I’m feeling organized all the way around.

On a bad note, CPA’s office stopped responding. If she thinks I am done, she will be surprised. I tolerate a lot but I also know how to write a legit, safe Yelp review. I also work in social media and I write for a living. I also know the business owner’s name. And I’m tenacious when it comes to my money.

I’m also feeling exhausted and doubting my ability to run anywhere.  I’m going to save that for early tomorrow when I can really get all six miles in satisfactorily…and I’m going to get that glass of wine after I start my bubble bath.