You are here: Home / Food / Rock and Brews Downey is Now Open at the Stonewood Mall
Tweet
Share13
Pin
13 Shares

This is the quote on the front of t-shirts that both the husband and I have, shirts we wear frequently. We received them at the opening night of the Rock and Brews at the San Manuel Casino in Highland earlier this year. A few weeks ago, we attended a media night for the Rancho Cucamonga Rock and Brews and the husband wore his shirt. (I wore a vintage Pink Floyd t-shirt — can’t twin everywhere.) Two weeks ago, we were invited to the media opening for the new Downey location of Rock and Brews at the Stonewood Mall. Hosted by Gene Simmons and Paul Stanley, in addition to the management and team from the location and others from Rock and Brews, the husband wore his again. Gotta represent, right?

The new Downey location is on the southeast corner of the Stonewood Mall by Macy’s, in a large building that reportedly used to be a Chinese food restaurant. I’m unfamiliar with the mall so I can’t confirm that, but what I can confirm is that the location itself is spacious enough to hold a large crowd of music-loving hungry people. It was full of them on the night of the media party, so I don’t have a good photo of the inside itself, but what I loved is that the hall leading to the restrooms is lined with huge portraits of rock stars and album covers. The ceiling throughout the restaurant is covered in historical music paraphernalia and like all the Rock and Brews, murals, music icons and flat panel TVs playing music videos adorn every inch of wall space. 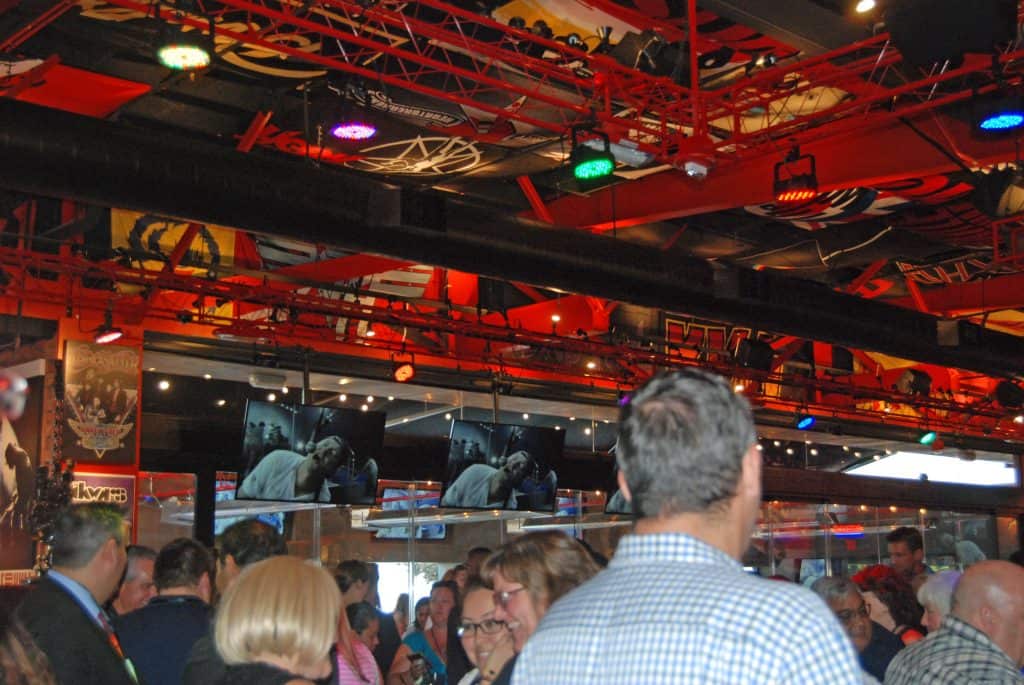 Rock and Brews is known for not only their eclectic music decor but a wide menu of appetizers, cocktails, craft beers and entrees with a unique spin. We were treated to a selection of them, buffet-style, at the media party. I may or may not have really focused on the spinach artichoke jalapeno dip. Yum. I also had a jalapeno margarita to go along with it. Their bartenders are rockstars in their own right and the service was impeccable!

Check out my posts about the San Manuel location and the Rancho Cucamonga location for photos of the menu items you can get at any of these three locations. 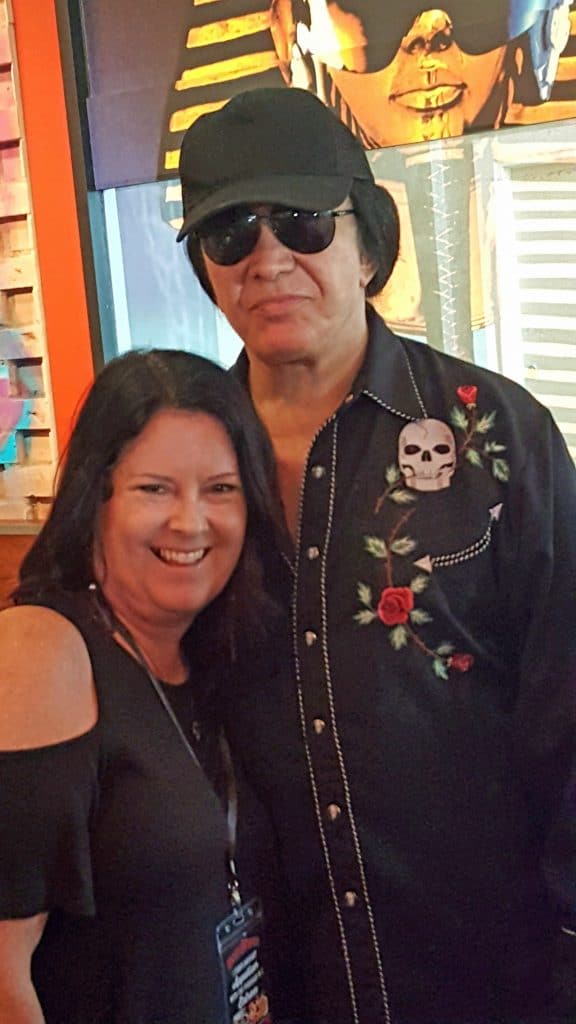 Meeting Gene Simmons and Paul Stanley was a bonus — they had photo opps inside the door, where I got an awesome fist bump from Gene, and I ran into each of them separately later on in the evening. We ended up with great table-mates right in front of the stage and had such a fun night! 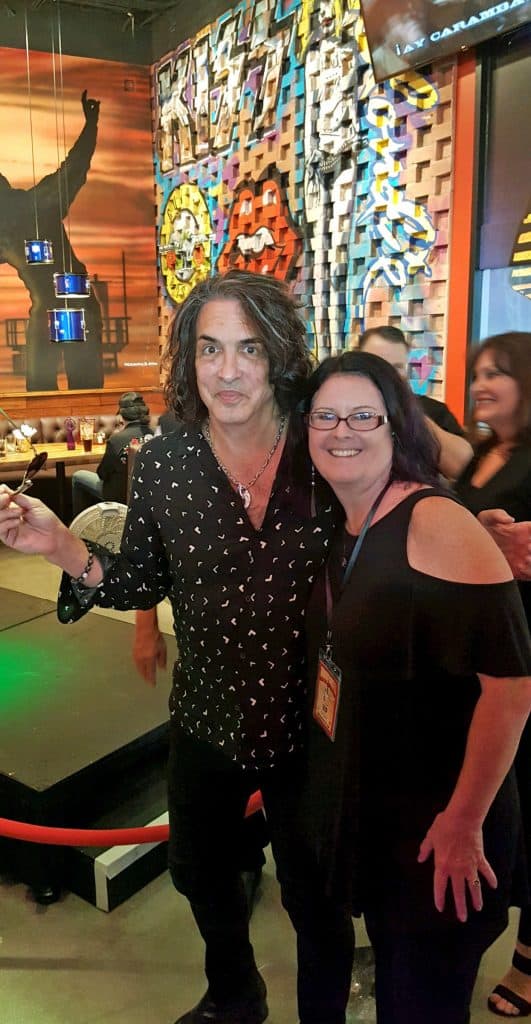 The management of Rock and Brews corporate and of the Downey location were on hand to share their excitement about the opening. Gene isn’t a big smiler, but he and Paul were entertaining nonetheless. Gene grabbed my glasses off in the picture above before the camera snapped, and Paul was orchestrating the crowd noise during the presentation of the check to the veterans’ association. Rock and Brews is a big supporter of our first responders and military. As a veteran, I give major kudos to a restaurant chain for supporting those who protect us all on a daily basis. Thank you, Rock and Brews Downey! 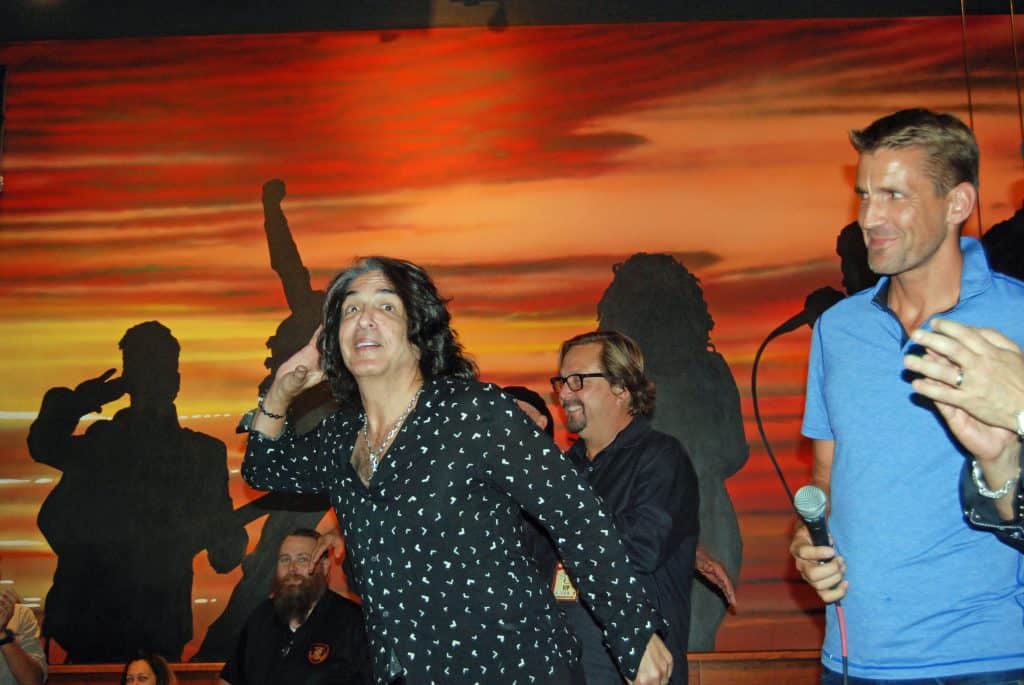 If you’re looking for a fun date night or even a family night out, you can’t go wrong with Rock and Brews Downey, or any location! The food menu is extensive, almost as extensive as the craft beer and cocktail menu. Try a dessert, watch your favorite sports on the many flat-panel TVs on the wall and listen to rock music to your heart’s content. Rock and Brews is fun for everyone!