Captain America: Civil War…the latest of Marvel greatness and the next chapter in the saga of the Avengers. Coming on the heels of Ant Man and Avengers: Age of Ultron, as well as Captain America: Winter Soldier, Civil War is the culmination of a long-brewing and slow-building division amongst the Avengers. Much has been made and said about choosing a side, and I did long before I saw the movie. I’m Team Cap all the way, and after seeing the movie, that hasn’t changed. What side did you pick?

“You chose the wrong side.”

Captain America: Civil War has much of the same cast as Age of Ultron, with the exception of Thor and the Hulk. (I know, I cried a little, too, but “Fortunately, I am mighty.”) Loki is also absent, but if you’ve seen the preludes to this movie, you understand why. Still… 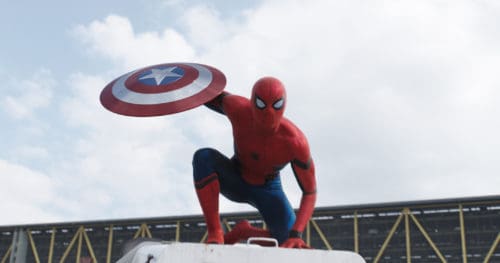 There are also a few new additions: Spiderman, Black Panther and Ant Man, characters equally important to the Marvel array but new to the Avengers mix. If you’re a Marvel comic reader, you’ll know their back stories.

“I think we should call the Avengers.” 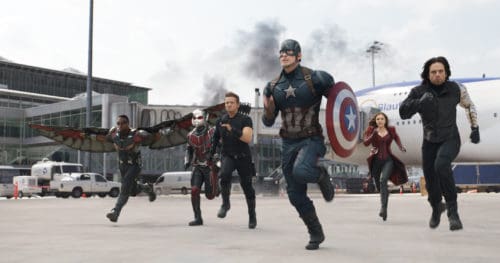 As I explained in my earlier post about the press junket interviews of the cast, the addition of new characters changes it up and adds new layers, increasing the size of the Avengers while giving a lot more depth to the big picture. 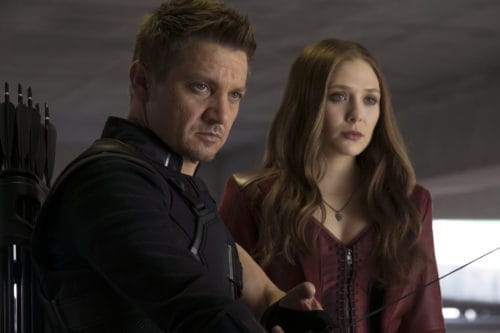 Age of Ultron saw the addition of Scarlet Witch, too, and Falcon became a regular due to his relationship with Captain Rogers.

I can’t help it, I do it during normal offline line, too. Yeah, I know…but there are very few things in life that you can’t relate to a Marvel movie in some way.

If you’ve seen the trailer, you already know all you need to know before you see the movie. Two sides fighting each other. Two groups of friends trying to each resolve the same problem but in a different way. One government trying to rein in what is seen as rebellious vigilantes wreaking havoc in New York, Washington, D.C. and Sokovia.

Tony Stark leads the other.

Captain America: Civil War is all that you expect it to be. There is a lot of fighting, including an epic battle that takes place in an airport, a good dose of humor, evolving relationships and devotion to friendship that changes people in ways none of them saw. People become closer, even if they’re on opposing sides of the Civil War. And throughout it all, throughout even the darker scenes that make you sad, you see the dedication they each have to making the world a safer place while fighting their own inner demons about their past and what their future as an Avenger means.

I love Bucky, and it broke my heart to see what he deals with and what it takes for him to get beyond his past. Revelations make it even harder, but then there’s a scene with a kiss and a Volkswagen that has you laughing as you watch the camaraderie develop between Bucky and Falcon while Rogers starts to fall back into an old sense of comfort with his friend. Bucky’s got a lot to deal with, knowing the two sides are essentially fighting because of him, while Hydra’s up to their old tricks but in a new realm. 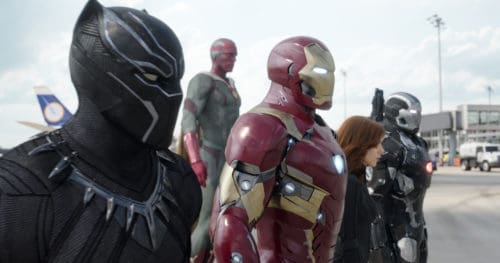 No matter what side you are on, you’ll find yourself thinking: what would I do? What side would I choose? As the movie goes on, you may re-think it and maybe even change your side. And you may think “What side would Thor pick?” Maybe that’s just me.

After the movie was over, and while I was discussing it with the husband (“It was a good talk!”) who saw the screening a few weeks ago with me, I had no questioning moment: I remained solidly Team Cap all the way, and I still do. Friends don’t leave friends behind, and motives need to be based on real reasons instead of personal agendas. 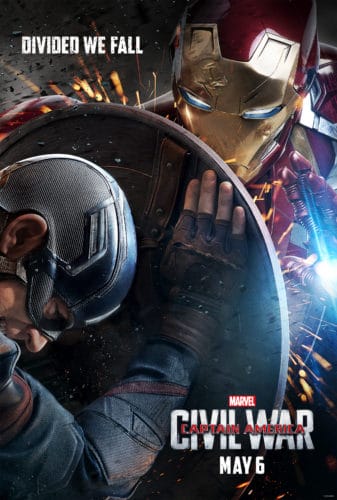 Captain America: Civil War comes out today, May 6, though some screenings were available last night. I’m going again next week with the rest of the kids who haven’t seen it, and I’m almost as excited as I was to see it the first time. Hawkeye! And Bucky. So much eye-candy in one place. And I won’t tell you any details, but Scarlet Witch and Vision’s relationship is unique and intriguing. Take that any way you want, but go see it to know what I really mean. Let me know what side you pick! And for fun, tell me what movies my Marvel quotes are from and who said them! (If you know me offline, don’t quit on me! Yes, I even do the quotes bit when writing!)

Team Cap all the way!!