Last weekend, I had the fun opportunity to go interview some of the Good Dinosaur cast and crew. Having seen the movie at a special screening the night before, I was full of questions. I love doing the round table interviews, where we have the chance to literally sit down and chat in a small group. There’s always laughing and insights and maybe even a secret or two, and this round table didn’t disappoint.

Those in attendance were: 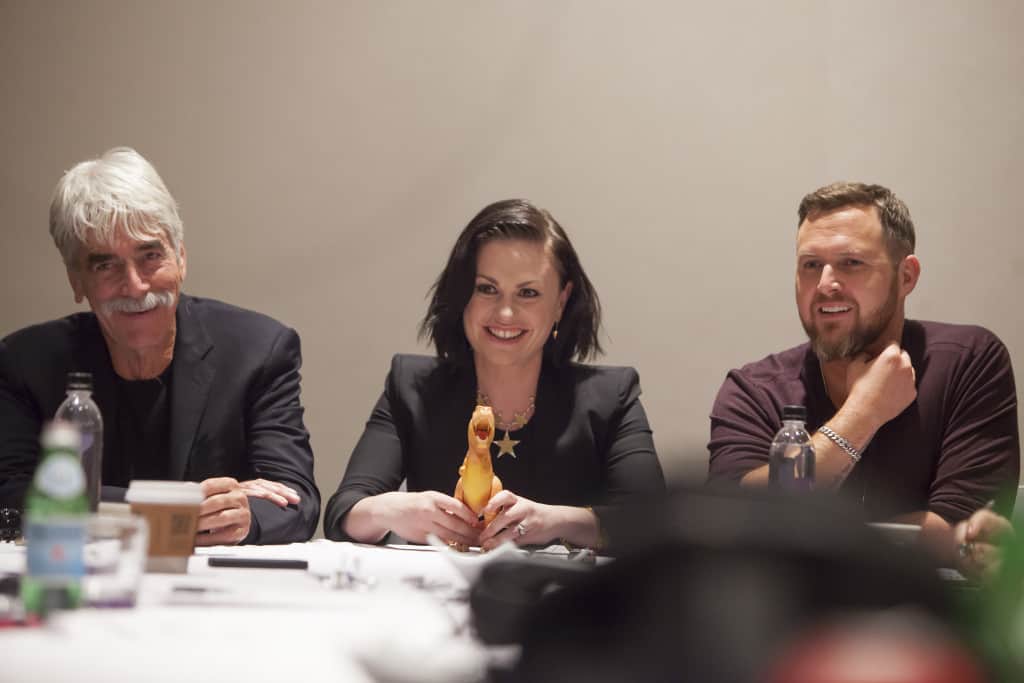 One thing we learned right away is that Sam Elliott hadn’t yet seen the movie! He was asked his thoughts on how the t-rex he voices looks a little like him and he responded that he’d not seen it yet. Unexpected, right?

Pixar is such an amazing company to work for, as told to us by every Pixar film cast/crew we’ve ever met, that it was no surprise that this whole group agreed wholeheartedly. I’ve heard before that it’s like winning the lottery, but it was really cute to hear that A.J. Buckley was so happy, he said “Are you sure? Are you sure they want me?”

Another fun fact that I’d never have expected is that the day’s press interviews were the first time many of them had been together! They each voiced their character’s lines separately, with the magic of Disney Pixar putting them together seamlessly. 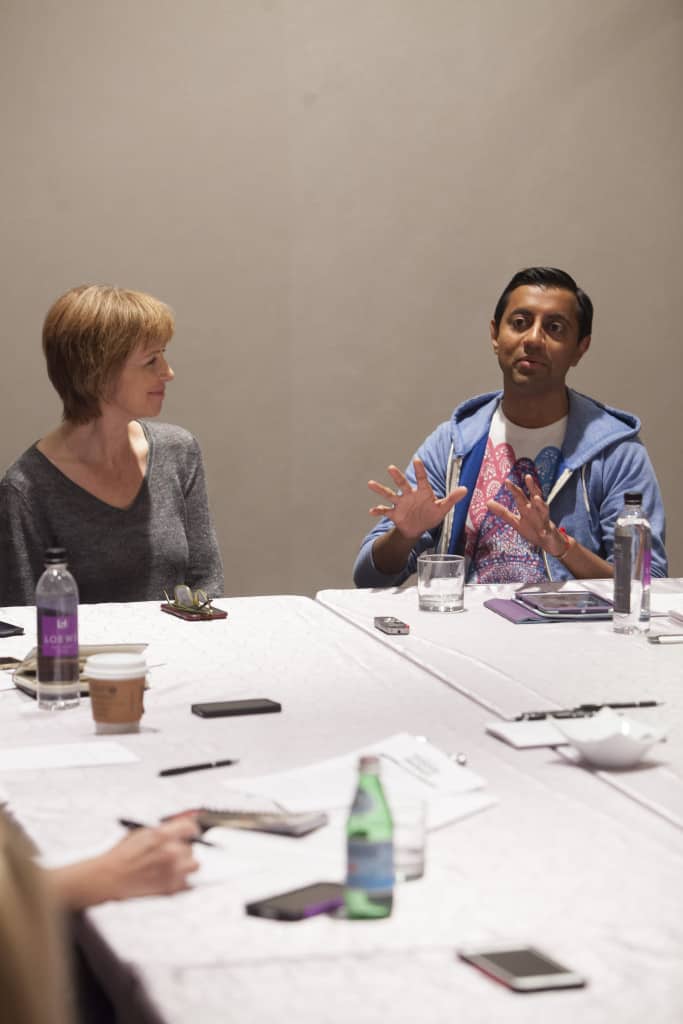 Before the movie, we got to watch a new short film, Sanjay’s Super Team, the brainchild of director Sanjay Patel and producer Nicole Grindle. Inspired a little by Sanjay’s interest in Superfriends, an 80s Saturday-morning cartoon, it’s based on Sanjay’s childhood disinterest in his heritage, in brief, to getting to a point where he is able to appreciate and embrace the culture. While it’s an animated film, it covers a touching father-son relationship beautifully. We were able to ask Sanjay more about the characters, the inspiration behind them, and how they so perfectly conveyed the story through the eyes of a child. I will never look at a superhero toy the same way again, and I learned a lot. Sanjay’s been with Pixar for 20 years, with a focus on art, and he was asked by John Lassiter himself to make this movie. That alone says a lot. While it wasn’t created to be paired with The Good Dinosaur, we all agreed it was a perfect match.

The Good Dinosaur’s a family movie, based landscape-wise in and around Jackson Hole, Wyoming, as illustrated and designed by artist Sharon Calahan. I won’t ruin the movie for you, but one trailer puts it like this: what would happen if the dinosaurs didn’t become extinct? Let your imagination run wild on that one a bit, and I’ll give you more info on the story in my next blog post on Wednesday. 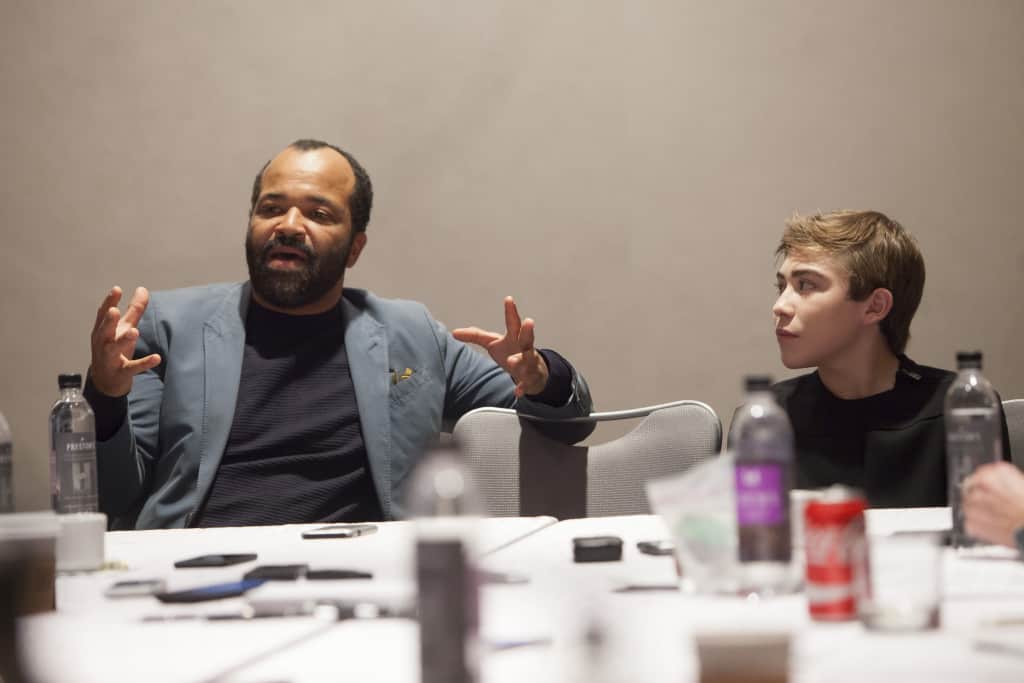 During press interviews, a common question is “What’s your favorite scene?” Out of everyone’s responses for The Good Dinosaur, I think my favorite was Jeffrey Wright, who voices Poppa, the father of the main character. There’s a scene in the movie where Poppa takes Arlo, his son, on a special nighttime walk to spend some time together while teaching Arlo something very important. All I’ll tell you is that it has a lot to do with lightning bugs, and that scene turned out to be Jeffrey Wright’s favorite. I was able to ask him how it felt to watch the movie with his kids and was it difficult to do that during a pivotal moment in the movie; I kept thinking “I’m 3′ away from Beetee,” his character in Hunger Games, and it was wonderful hearing his feelings on being a parent both on-screen and in real life.

Anna Paquin shared how her children won’t be allowed to see much of the work that she and her husband do, but she does have street cred now. “My mom’s a t-rex. What’s your super power?” She held onto the toy version of her character throughout the interview, which made her even more endearing. 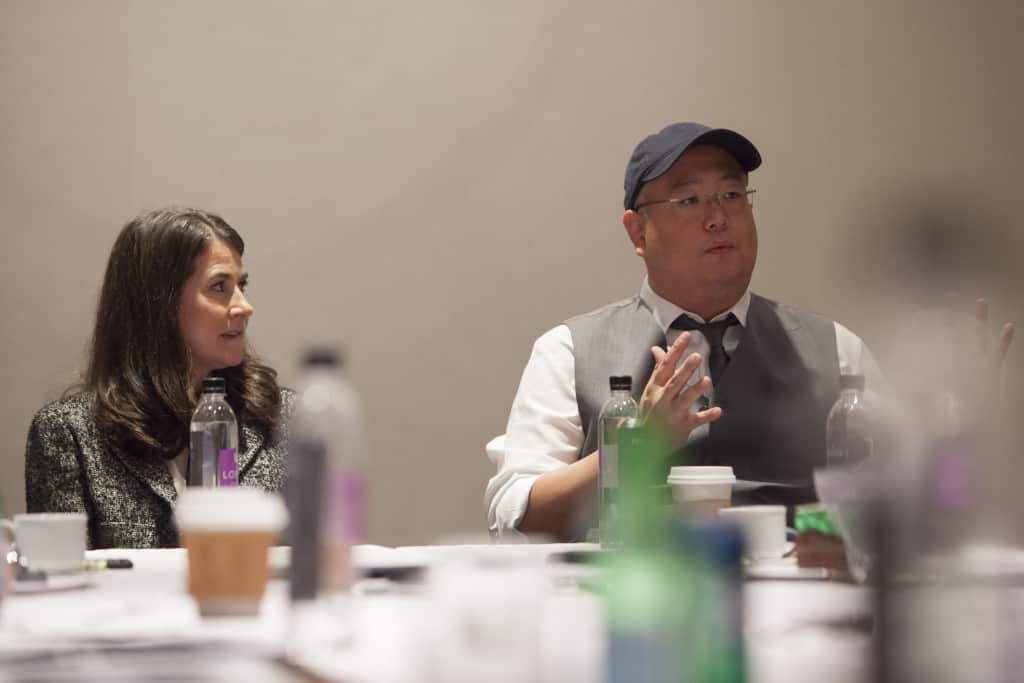 One funny part of the group interview with Sam Elliott was when one of the writers voiced something many of us were thinking: we’re in a room with infamous Sam Elliott. She told Sam that her mother would be out of her mind knowing she was interviewing him. Everyone got a good laugh out of her candor and Sam gave such a stunning, humble smile. So much talent and he was so gracious with all the questions, as they all were. You get the sense from the beginning that they all are truly happy to be involved in this project. Sanjay’s gestures and honesty about why he made the short, and Peter Sohn’s genuine pleasure in hearing our praise was worth the crazy drive I had from Temecula to the Hollywood location worth every single second of it. To be able to tell them how much we enjoyed their work truly makes what I do such a blessing, it never feels like work. 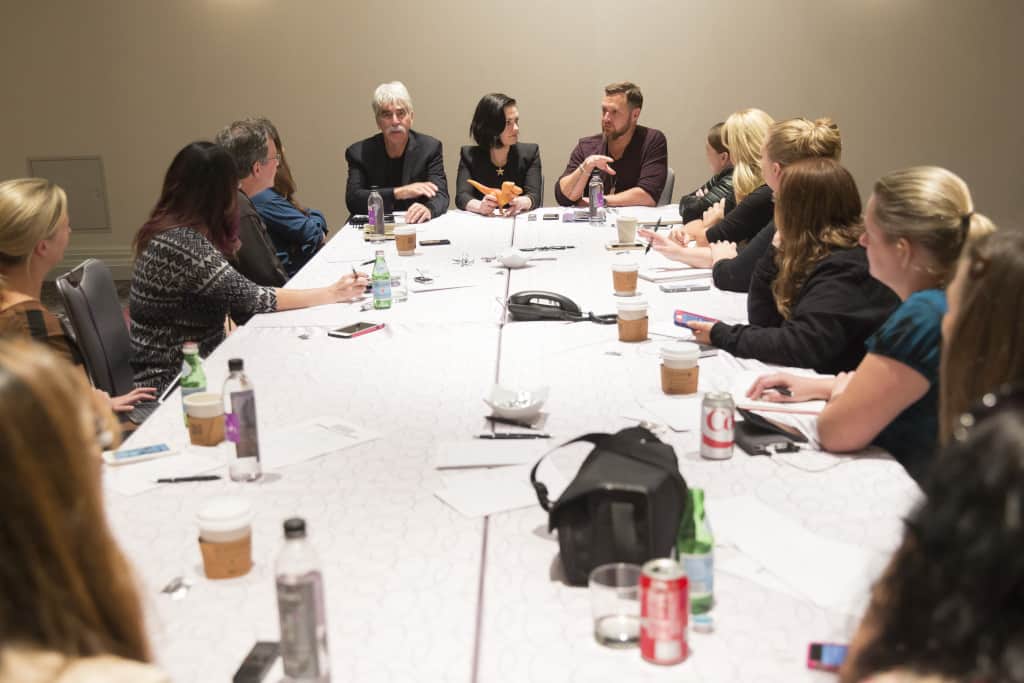 (That’s me on the left, facing towards hottie A.J. Buckley, so raptly interested…and 3′ from Sam Elliott!)

What a day it was. The 1.5 hours went far too quickly. I thoroughly enjoyed being able to meet them all and look forward to taking the rest of the family when it comes out this week!

Stay tuned for a movie review and more photos on Wednesday the 23rd. Make plans to see the movie!