You are here: Home / Marvel / What Does Thor Ragnarok Mean? My Day with the Cast of the Movie
Tweet
Share8
Pin
8 Shares

This is a question I’ve been asked a bunch of times, and do you want to know what my answer is?

Yeah, I know, not helpful….but I’m going to share here on the blog, along with some other insider tips that I learned after spending an afternoon interviewing the cast, listed below. And let me just tell you, the talent in that room! Every single time I interview any Marvel cast, I get a little fangirl-y. I behave, I don’t let it get out of hand but in my head I’m thinking things like “I’M BREATHING CHRIS HEMSWORTH HAIR!” and “Did Tom Hiddleston just look at me? HE DID HE DID HE DID.” (I’ve got bad eyes, so I’m not always sure….)

In attendance at the press junket were:

See what I mean? All those big names! Right off the bat, let me just talk about the obvious: the bromance between Thor and Hulk. It’s evident in the trailers (and I’ve shared one below) and of course, moreso in the movie. Seeing Chris and Mark sitting next to each other in the interview, it’s not just a movie thing. They seem to truly be good friends and Mark’s such a funny guy that seems to lay it out there and be himself in a way that’s really refreshing. Who knew Hulk was so witty? 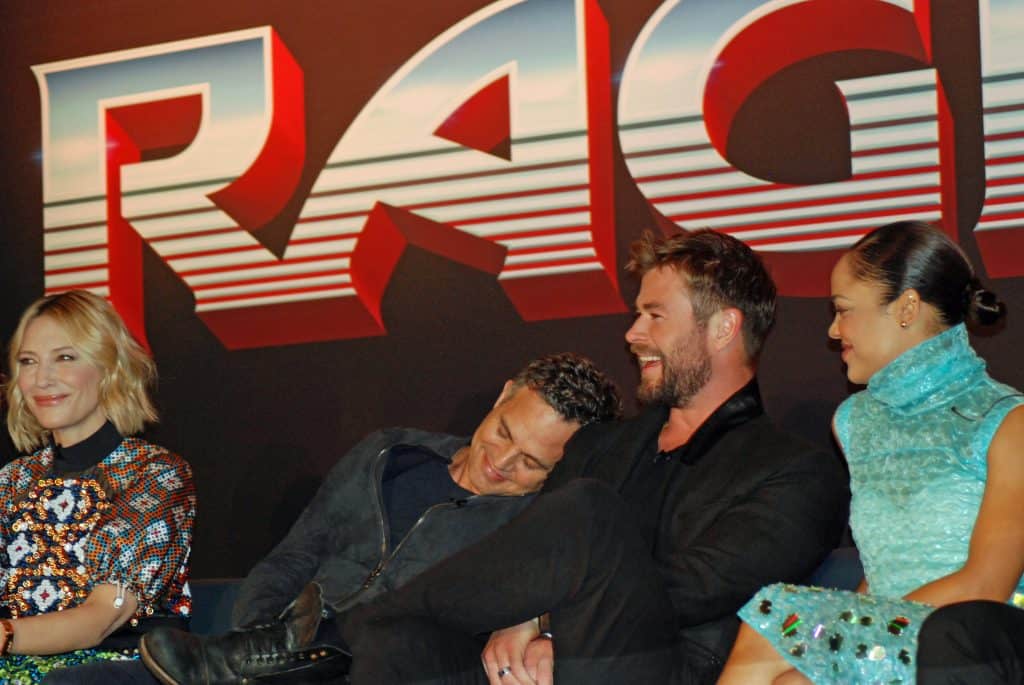 This was my first time interviewing Taika Waititi, and wow, what a powerhouse! His energy fills the room, his humor is on point and he is clearly a creative above and beyond the norm. He was asked what the toughest part about making the movie was and he stood up, full of drama, pointing at the cast: “These guys! Them! Them!” It was hilarious! 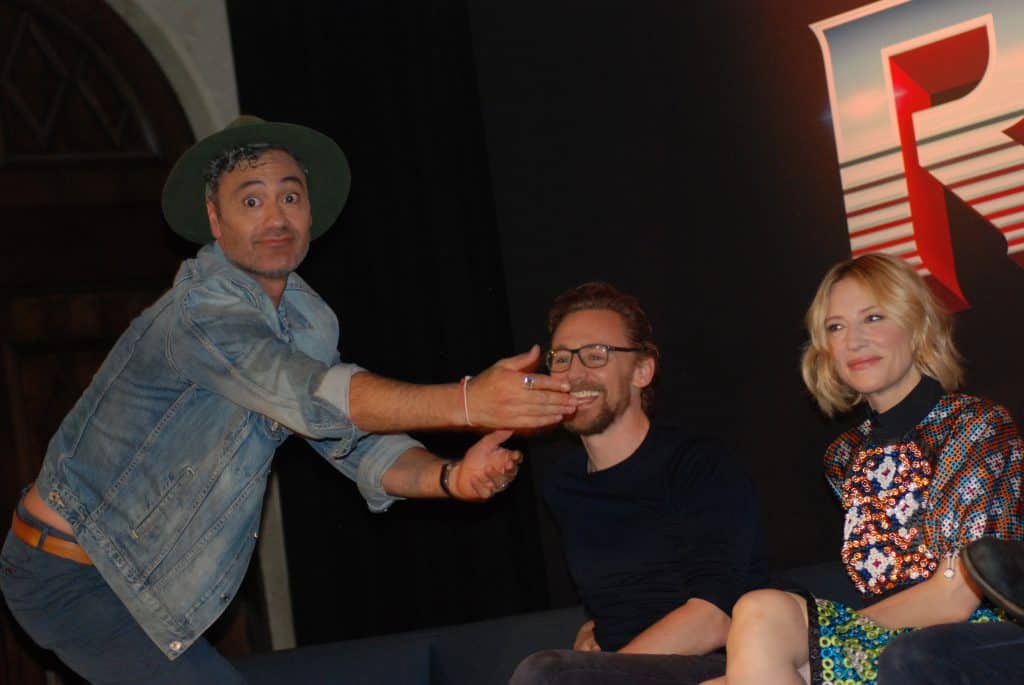 Another obvious thing about the movie is the change towards more humor. Various MCU movies have added in moments of humor — such as Guardians of the Galaxy and some of the Ant-Man phrasing — but this movie took it to a new level, and per Kevin Feige, really allowed Chris Hemsworth to show his acting chops, with Taika at the helm giving him, and the rest of the cast, the latitude to push the humor envelope further than ever before. (No spoilers about the movie but wow, you are going to laugh!) 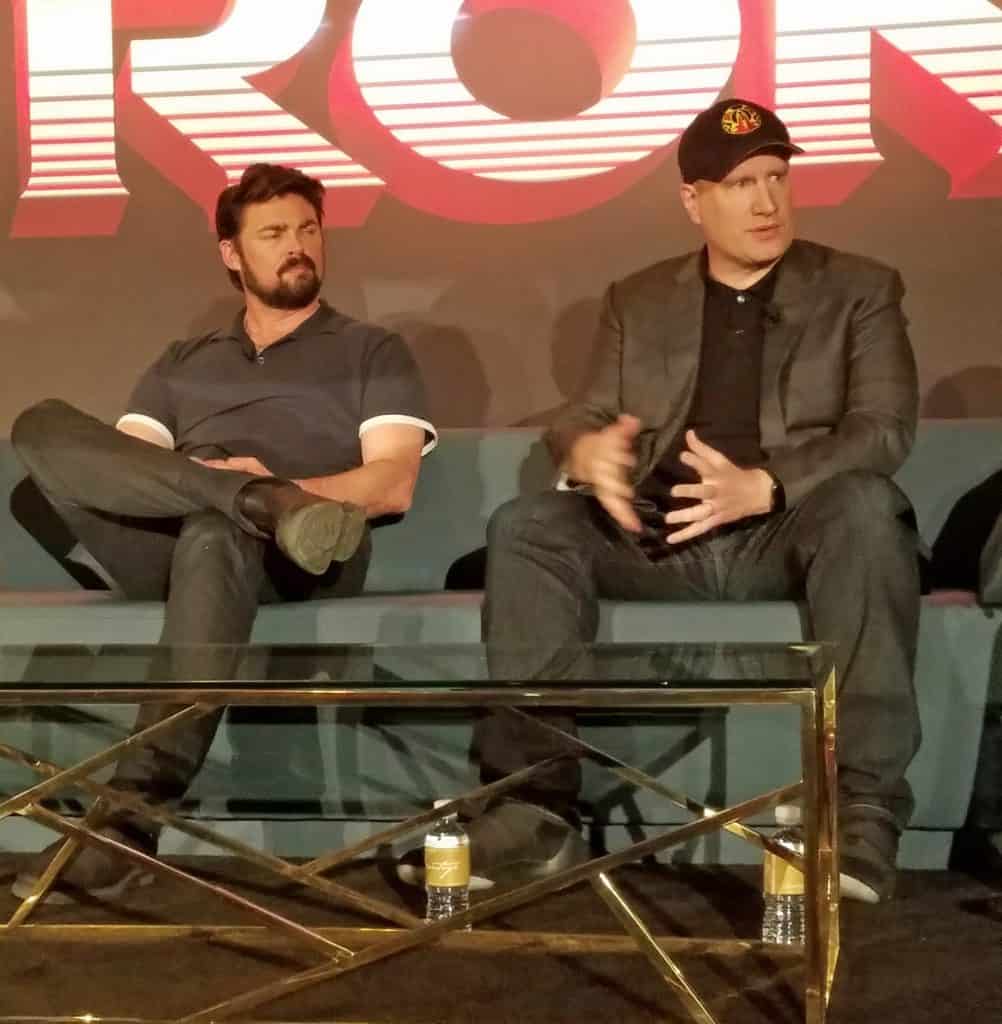 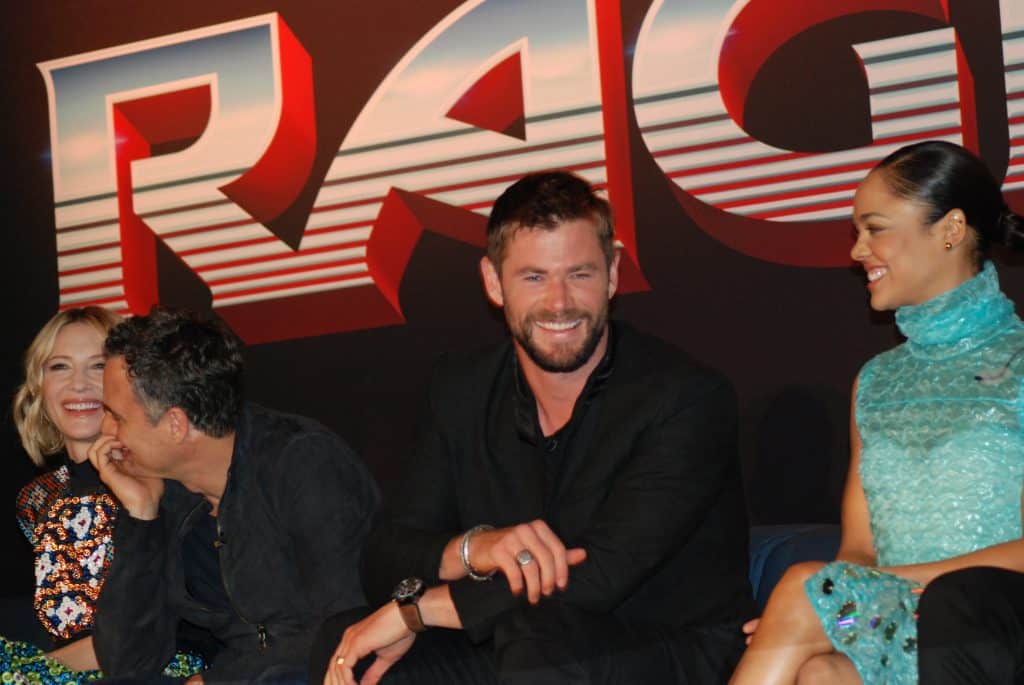 Someone asked Tessa if she had concerns with playing a character that’s different from the comics; she pointed out that her biggest issue was that the Valkyrie is as ostensibly as strong as Thor, but she’s much smaller. She totally pulls it off and as the trailer shows, has no issue with showing off a little to her “Revenger” team mate. 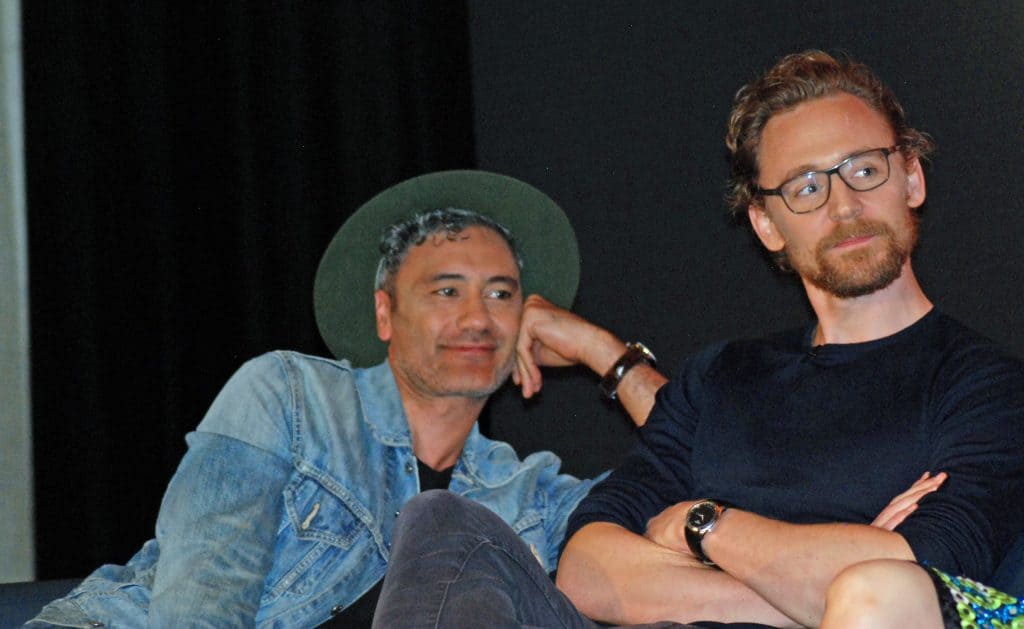 The subject of healthy competition came up. How could it not in a cast of super-heroes with all their own gifts such as this crew? Reportedly, Mark was always in the middle of it. Jokes came up about the war between New Zealand and Australia — as Chris is from Australia and Karl from New Zealand — and how this movie helped bridge the gap. 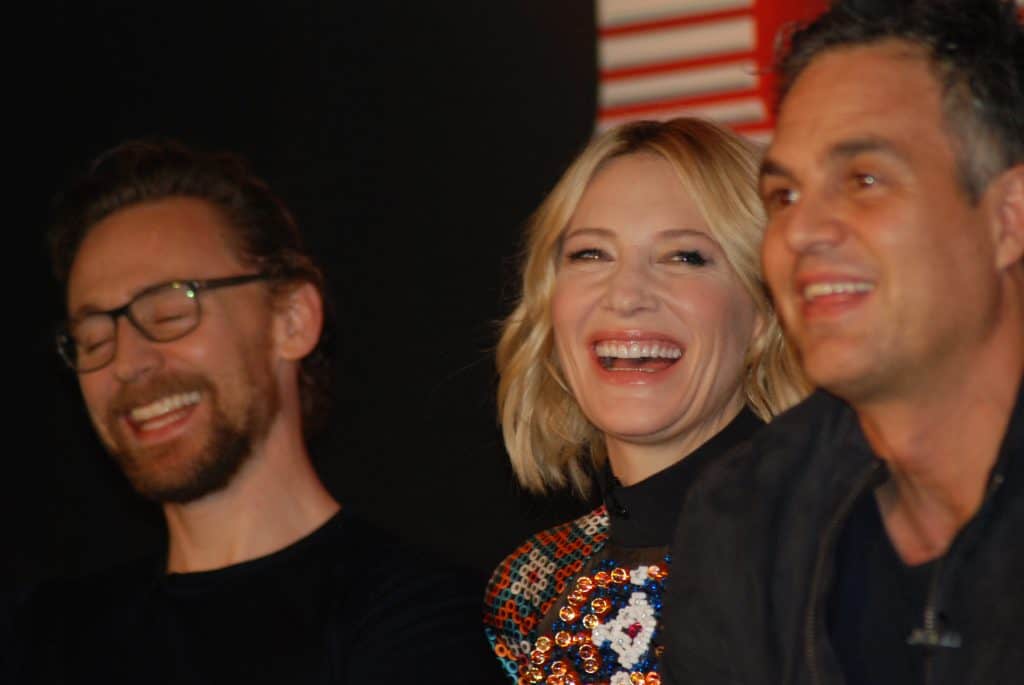 Sometimes at press conferences, you learn a lot about the movies and some, you learn a lot about the cast. This junket was a good mix between the two. It’s one thing to see photos of the celebrities and watch the movie, but the behind-the-scenes work and activity really pulls it all together to give a new perspective. (It’s still surreal to me that I get to do this and call it work!) I’ve always loved the Thor character, and of course, Chris Hemsworth…and if you are familiar with the Norse mythology (“mystical and mysterious,” as Tessa calls it) is fascinating. Are you a comic reader? If not, now is a good time to start! (There are also books available that will bring you up to speed on the background of Marvel so you can hop into the MCU series and understand what you need to know.)

Jokes continued as Cate talked about her inability to learn to throw things quickly enough, to the point where they had to put sugar packets in her hand so she had something to throw rather than mouthing “Ha” each time to avoid Taika looking at her like she did something wrong. (And this is all in a good-natured way.) Mark says “I’m so glad you’re not the only person he looked at like that. He looked disappointed in me a lot.”

I was just psyched up to ask a question of Tom, as he’d been pretty quiet. Loki, quiet…I know, right? As I get ready to raise my hand, the moderator asks him a question. MY QUESTION. Okay, so he had no way of knowing this but shut down! He asked Tom about how Thor’s character had evolved, so was there a possibility of Loki doing the same? (My question had been exactly that: what about character development for Loki, since the relationship between the brothers continues to grow and change in Thor Ragnarok.) “Thor has evolved, and grown, and matured; and Loki in a way is stuck in his struggles of the past.” Good answer, Tom. Again, no spoilers, but yes. Go see the movie. 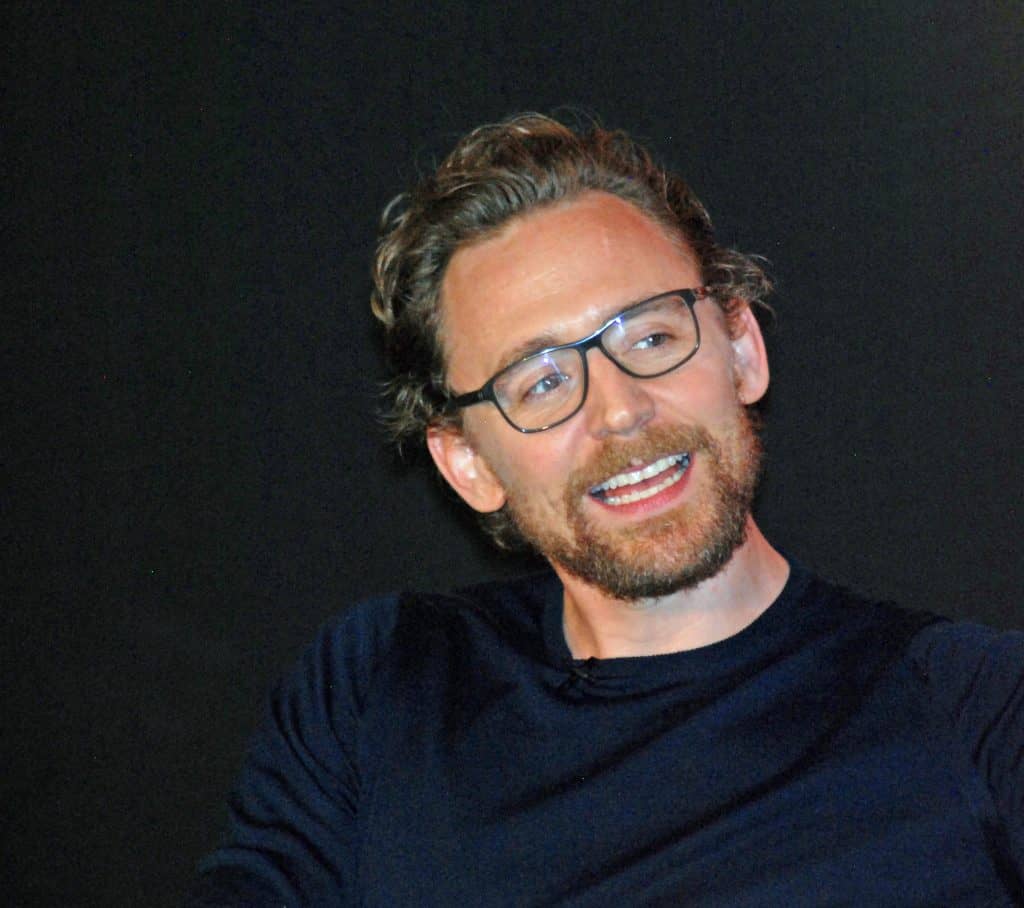 Tom also joked that he asked Taika to give him a haircut. I’m so glad, as I’m sure are many fans, that it was not in the cards. It was hard enough seeing Thor’s long locks gone, I don’t think I could have taken Loki’s hair being short. Tom’s fantastic looking with short hair, but Loki…nope. 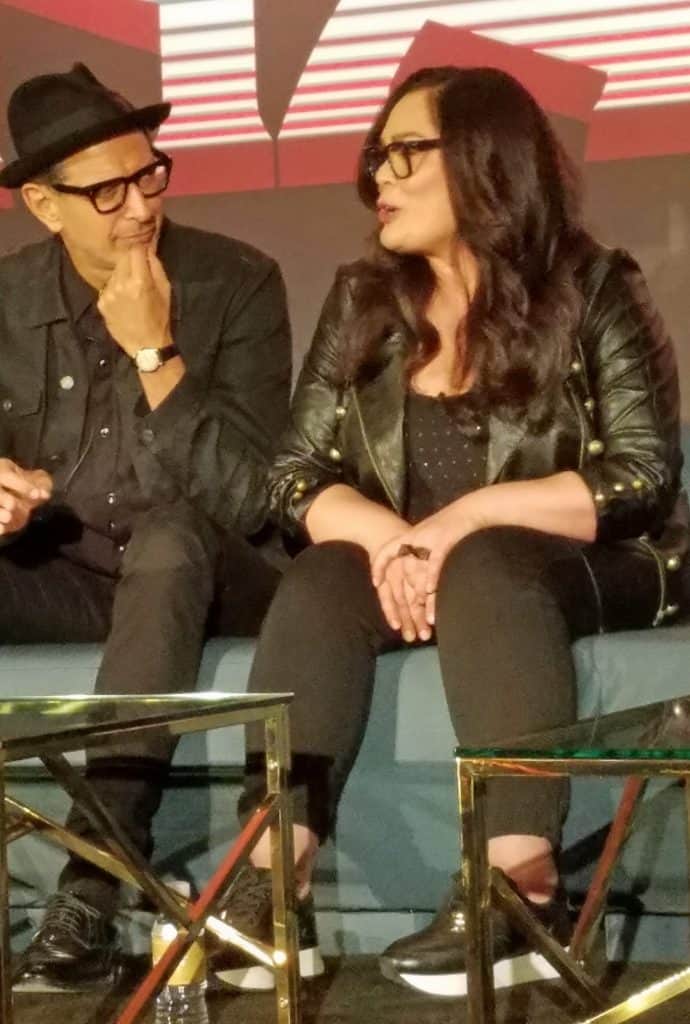 There are some Easter eggs in the movie, and they came up during the junket. I won’t give them away, but keep an eye out in the background. When Thor is on Sakar, look around as he’s walking outside for one of them.

Karl is another newbie on the Marvel set, and he shared how much he enjoyed the environment Taika created, all the way down to the music he sometimes played on set. “And it was just wonderful to – felt like everybody had your back, and we had – we had fun.” It sure looks like it! 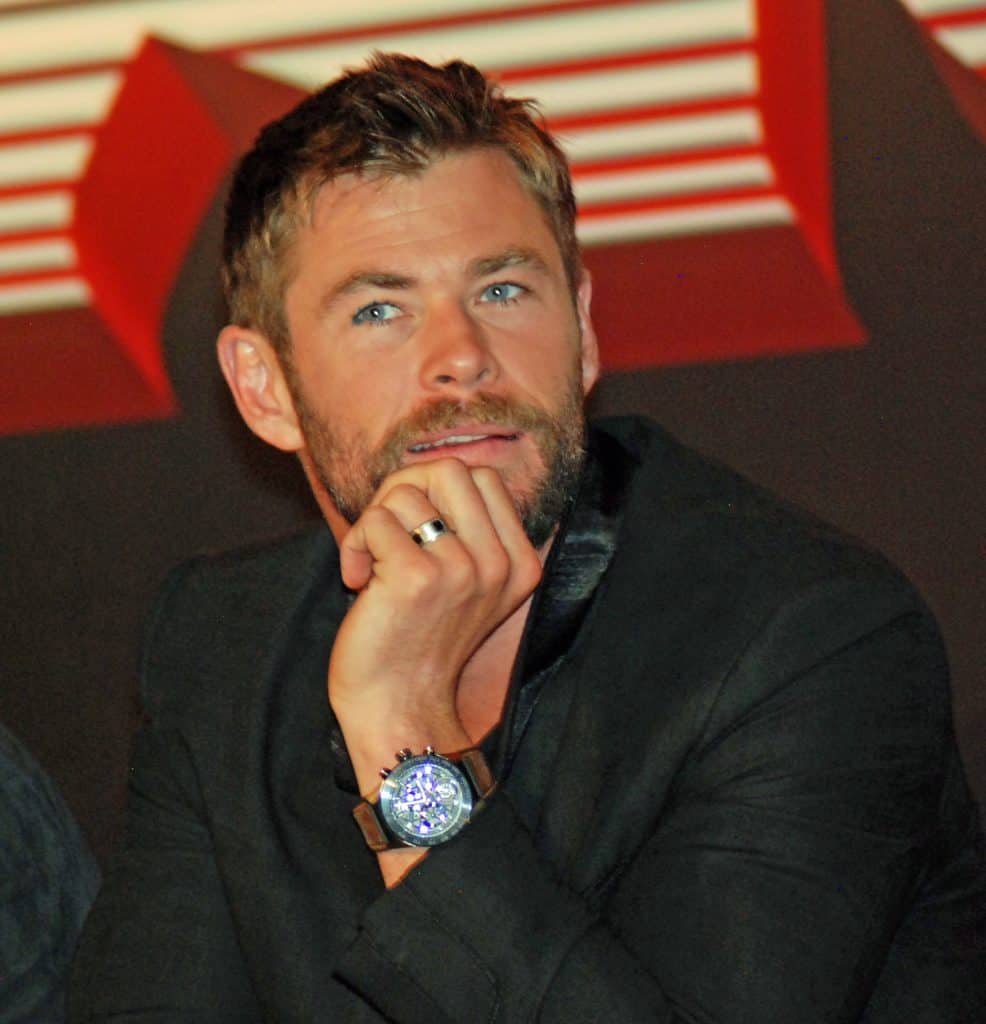 I saw the movie two weeks ago and my younger son asked me last night when we’re all seeing it. This weekend, of course! We’ll fit it in there somewhere. I can’t wait to pay more attention for the Easter eggs I didn’t see and to understand all of it even more. Go buy your tickets now, and here’s another trailer in the meantime. (And then you can answer the question: what does Thor Ragnarok mean, too!)