I love to cook, and bake, and I love food. I just don’t love the cost. Like everyone, I have a budget and I need to stick to our lifestyle of made-from-scratch food without overspending. Being able to fill my cart with seafoods and steaks and gourmet condiments just isn’t going to happen, so over the years, I’ve learned how to still have meals that are out of the ordinary and taste fantastic while staying within our budget. My goal is to feed five people for under $10 per meal. Cheap meals for the win!

On any given day online or in the news, you’ll run into articles about how eating healthy costs a lot more than convenience and ‘cheap’ food, so people don’t do it. I’ve looked at convenience food recently: frozen dinners, boxed food, canned items, etc. It’s not cheap. I can’t imagine how it’s any cheaper than making from scratch, with the exception being organic food. (Confession: I love organic food, but can’t afford it for every produce item so we’re taking organic out of the equation here.) Even if you broke even, who wouldn’t rather having no preservatives in their food and know it’s fresh? I am at a loss as to why we so often hear that healthy isn’t do-able. Is money the real problem here?

Cooking from scratch does take time. There are nights I’d love to grab a frozen pizza (and have been known to do it on a rare whim) but it’s not the norm. The norm is shopping in such a way that fills our produce drawers and gives us meal options for the whole week without having me go all over time to find the best prices. Who has time for that much shopping, right?

We are huge Costco shoppers and we buy in bulk when we can. We get better quality items and we can stock the pantry, refrigerator and freezer in batches, which is the first step of being able to prepare meals on the cheap: advanced preparation. Build your pantry of the staples — flour, sugar, salt, baking powder, etc. — and you’ll find it so much easier to cook freely. Knowing you have all you need to cook without much restriction takes away from the chore factor and makes it fun. You can also experiment more!

Second step: look at the sale items in your stores. Each week, I hit up one store, and when there, I buy produce for the week. I love butternut squash but it’s not always on sale, so we don’t get it unless it is. In fact, other than basics like green onions/scallions, carrots, cilantro and cabbage, the rest of our meals contain whatever produce is on sale that week. Last week, it was zucchini, kale, and a few other items. This week, it is eggplant, Roma tomatoes, sweet potatoes, grape tomatoes and bell peppers. Using what’s on sale, by becoming adept at being flexible and knowing how to use the various vegetables and fruits, keeps your costs down and gives you more items in the rotation so your family gets bored with meals a lot less often. The same thing goes for meat, which we’ve cut back on but we still maintain in the freezer.

Third step: maintain a list of meals that your family likes. I have a very basic list of things like stir-fry, hungry man casserole (not the boxed kind), tacos, burritos, cream cheese-stuffed chicken breast, chicken soup, gumbo, etc. Each time I make something new, it goes on the list, as long as it was enjoyable to make, the family liked it and it didn’t require anything weird that I couldn’t easily find or didn’t take too long. Same thing with sides, breads, and desserts. I have a designated bookmark list on my computer, a basket on my cookbook shelf for cutouts and printouts of recipes, and my cookbook shelf is organized by type, such as cupcakes, cookies, slow cooker, old-fashioned recipes, international and so forth.

Last step: get to know your shopping options. I frequent one or two grocery stores (Stater Bros or Winco), a couple of healthier stores (Fresh and Easy and Sprouts, or Trader Joe’s if I’m over near there) and then there’s Target for canned items, baked goods, creamer, etc. I hit up one store per week, depending on the longest list, as long as I can fill in the produce needs there, and all of the stores listed sell sufficient produce, though I have my favorites if I’m buying a lot. Don’t feel you need to go more often; you aren’t saving money if you’re wasting a lot of gas, so keep a couple of lists. We actually keep three, and they are: Costco, Target, grocery. I go out once a week to run these errands and the second two lists go with me. Costco is the husband’s shopping trip every other weekend, before I go for my weekly trip, so I can plan around what he’s found, as his trips can result in meat, ies, a fancy cheese, whatever he finds that’s on sale or already a good price. Variety really does make it easier! I know people that have Taco Tuesday, casserole Wednesday, etc. That would bore me stiff, as food should be enjoyed; it’s necessary to live and there’s nothing wrong, within moderation, with liking what you eat, and it’s a big reason I’m not a fan of a restrictive diet or food plan outside of a medically necessary one. But I won’t digress… 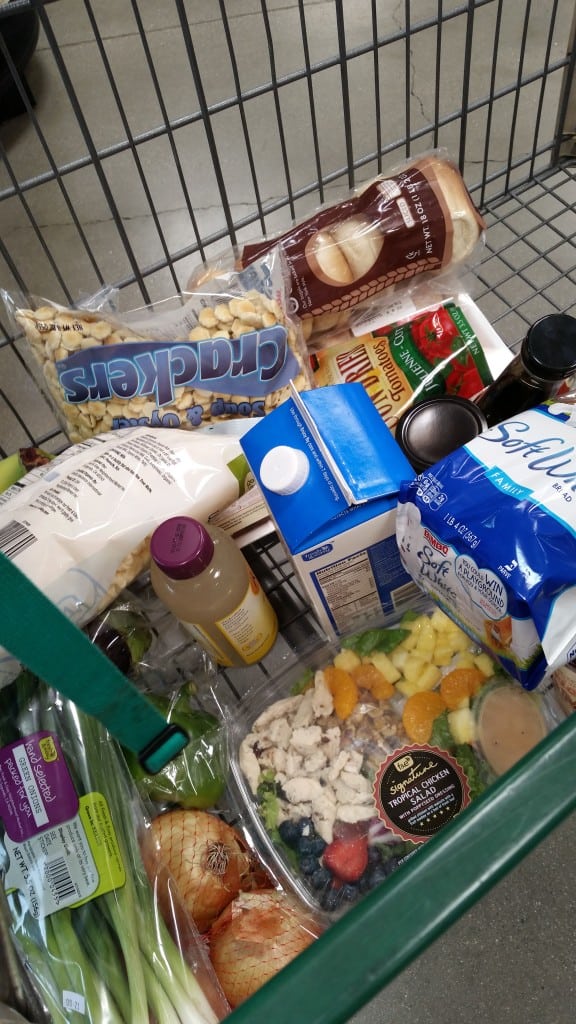 Shhhh, don’t tell anyone I bought a pre-made salad! Fresh and Easy’s food is free of all those additives though, so I’m still good, phew.

Once you’ve gotten your pantry ready, which is even easier if you pick up one or two more things per week (last week, I grabbed mirin, a Japanese vinegar of sorts and this week, a new bottle of organic raw blue agave) so you aren’t spending too much extra each week, learned to shop by what’s on sale, and have a list of reliable recipes and/or cookbooks, you’re ready to start putting all that you’ve learned to good use!

Here are a few suggestions of less-than-$10 meals I’ve fed the family in the last week, with a cost breakdown for validity.

Vegetable pasta: This was a yummy dish of fresh sauteed vegetables over pasta, given pizzazz with seasonings and fancy cheese. 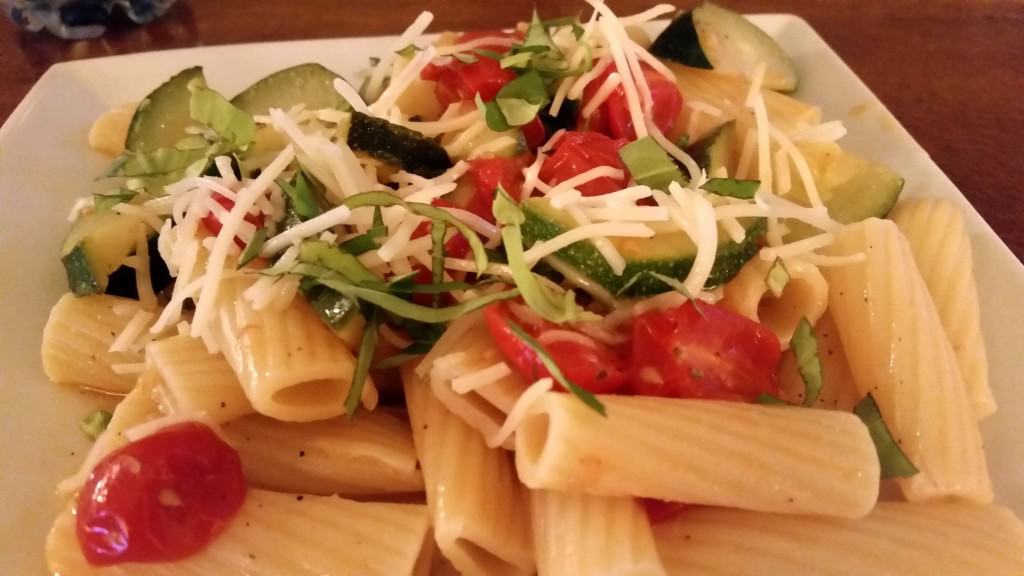 Romano cheese was the perfect addition to the sweetness of those baby tomatoes. 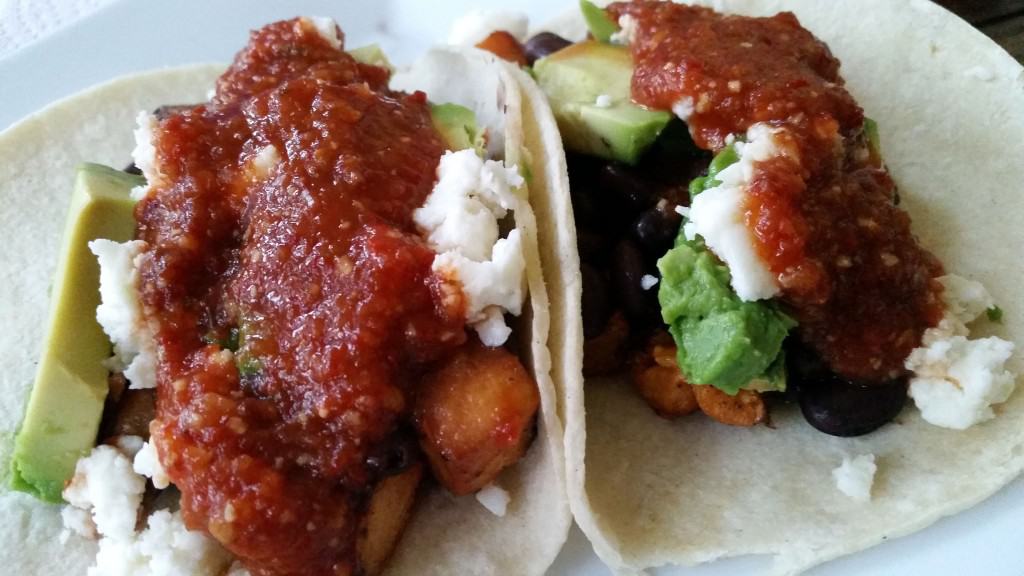 Look at those colors!

Roast Chicken, roast carrots and artisan bread: bake the bread earlier and put the chicken and carrots in the same oven, low-maintenance meal.

The options go on — chef’s salad, potstickers with stir-fried rice, chow mein, burritos, barbecued pork chops ($6.00 for six chops, if bought in large packages at Fresh and Easy and frozen after separated into smaller portions, or other stores with sales), tons of chicken ideas, soups, etc. Whether or not you eat meat, this isn’t tough to do. When I see a meat go on sale, I buy it and freeze it. It’s good for later on and I have saved money, as we’ll always have to eat! If you’re on a gluten-free diet, you may need to adapt recipes a bit, but corn tortillas and corn pizza doughs can sub in for a lot of things. Got a picky eater? In my house, the kids were reminded I’m not a restaurant so they have to eat it or they will be hungry. After once or twice of that, they realized they were best off just eating what offered, and you know what? I have three adult kids and one middle-school kid who aren’t picky. They each have a couple of things they don’t like — as we all do — but I don’t have to cook around those needs anymore. They’re pretty adventurous eaters, and I think we do our kids’ future spouses a favor by teaching them to expand their palates as they’re younger. Even if you don’t make the healthiest of meals — heck, I have biscuits and gravy on my list — at least I know what’s in the food I’m service and it’s fresh as can be and seasoned to our liking, and without the heavy sodium many pre-packaged foods contain.

Overall, eating from scratch isn’t more expensive if you invest the time and effort, especially initially. It gets easier, as you get in the habit of thinking of the steps normally and apply them to your meals. What’s in your pantry is what you have, and you start exploring more as you realize you forgot one thing but still have the other items: what can I sub in? Creativity expands your meals even more and you may even find that you turn into a foodie!