No matter how old we are, if we have kids or not, we’ve all heard the story of the Nutcracker. Many of us have read our children the story before bedtime or taken the family to watch the story played out on the ballet stage. We’ve also hummed along to the popular Dance of the Sugar Plum Fairy, especially during the holidays. The story of Clara, the nutcracker prince and the Mouse King is familiar to most of us and is a staple throughout the Christmas season. Now we all have one more way to enjoy this classic story retold with a new spin in a way only Disney could do it. 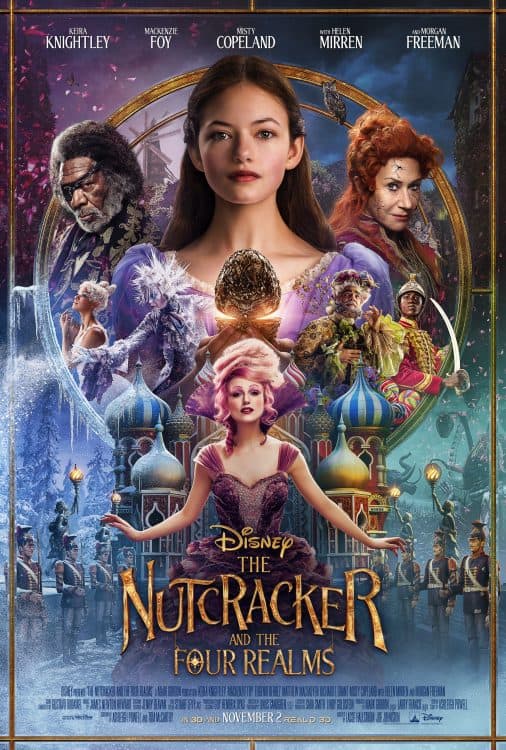 I got to screen the movie at the world premiere red carpet event on Monday night at the El Capitan Theater in Hollywood. It was a glamorous evening that went far too quickly, but the movie was amazing and had us all transfixed from the moment the lights dimmed. The cast of the movie includes Mackenzie Foy (“Clara”), Morgan Freeman (“Godfather”), Helen Mirren (“Mother Ginger”), Keira Knightley (“Sugar Plum Fairy”) and more, and as always, casting is spot on. 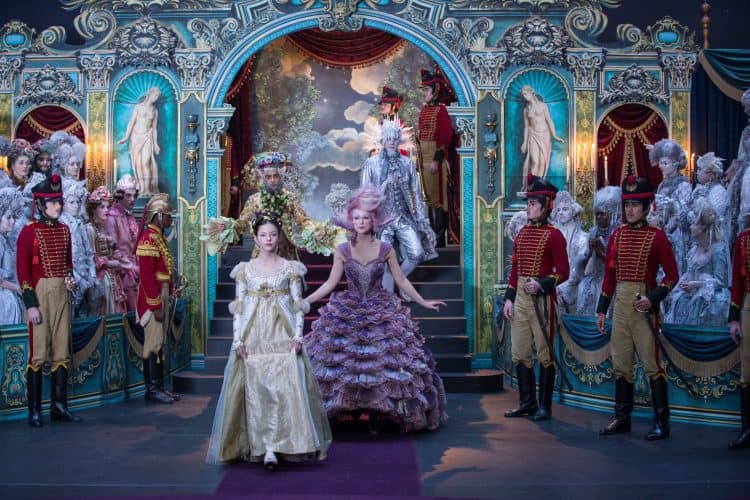 Mackenzie Foy is Clara, Keira Knightley is Sugar Plum Fairy, Jaden Fowara-Knight is Phillip, Eugenio Derbez is Hawthorne and Richard E. Grant is Shiver in Disney’s THE NUTCRACKER AND THE FOUR REALMS.

Mackenzie, familiar to many of us as she’s grown up on-screen, does a spectacular job of bringing Clara to life, and as she struggles with the loss of her mother, she quickly finds herself on a surprise adventure. Christmas gifts at a Christmas Eve party are presented to the child recipient in a very extravagant manner, and Clara’s was no exception. In attempting to find, and open, her very special gift, she is thrust into the realm of snowflakes, which leads her into other realms, only to learn that her mother had a secret life. As she meets various characters and learns she is far braver than she thinks, she also finds out the meaning to her mother’s cryptic last message of “Everything you need is inside.” 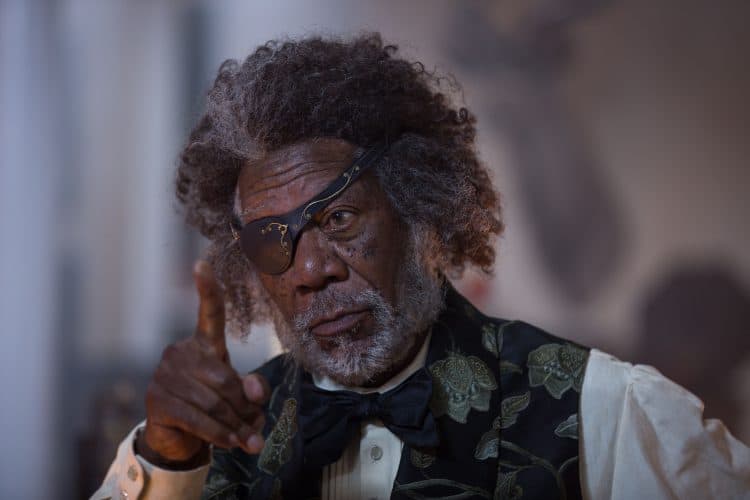 Morgan Freeman is Drosselmeyer in Disney’s THE NUTCRACKER AND THE FOUR REALMS.

Nutcracker and the Four Realms is 99-minutes long but it doesn’t feel it. The majesty of the ballet performance of Misty Copeland sucks you into the story quickly, as her dance explains to Clara exactly how her mother became a part of the realms, without words. Misty’s dance is entrancing and captivating. 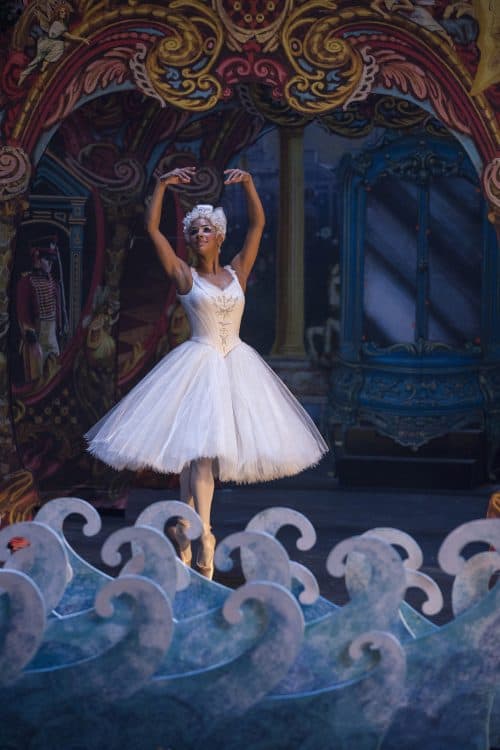 Misty Copeland is the Ballerina Princess in Disney’s THE NUTCRACKER AND THE FOUR REALMS.

The expected period costumes are colorful and authentic, and the entire movie is filmed with a mystical feel that pervades the entire movie, much like you are being enveloped under a starry sky in a Victorian era village. It reminded me exactly what I felt like whenever I read the story to my children years ago, with Christmas lights twinkling through windows and twines of evergreen boughs. 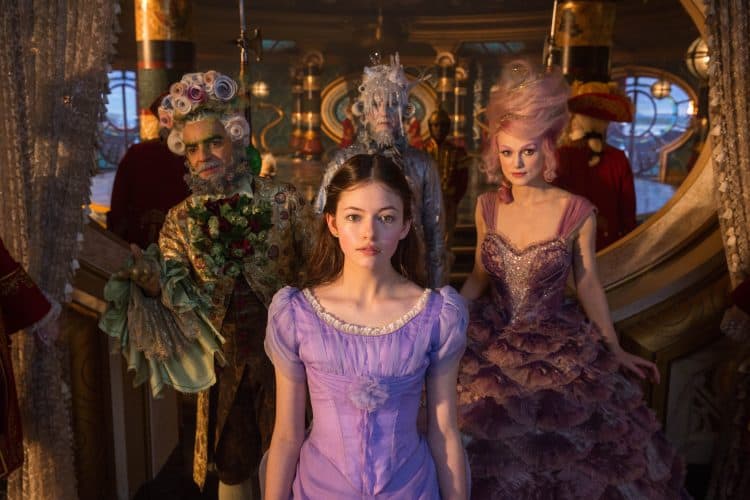 Mackenzie Foy is Clara, Keira Knightley is Sugar Plum Fairy, Eugenio Derbez is Hawthorne and Richard E. Grant is Shiver in Disney’s THE NUTCRACKER AND THE FOUR REALMS.

The movie is not a musical, nor is it focused on ballet. Instead, the ballet itself is but a small portion and the rest is more action and drama, as Clara moves between the realms and develops new relationships in something of a parallel universe where time goes much more slowly than real life. No spoilers here, so I won’t tell you the details, but you will grow to love Clara, feel heartbroken for her sad father and you will root for the Captain of the nutcracker soldiers. (It was Jayden Fowora-Knight’s first role and he nailed it!) 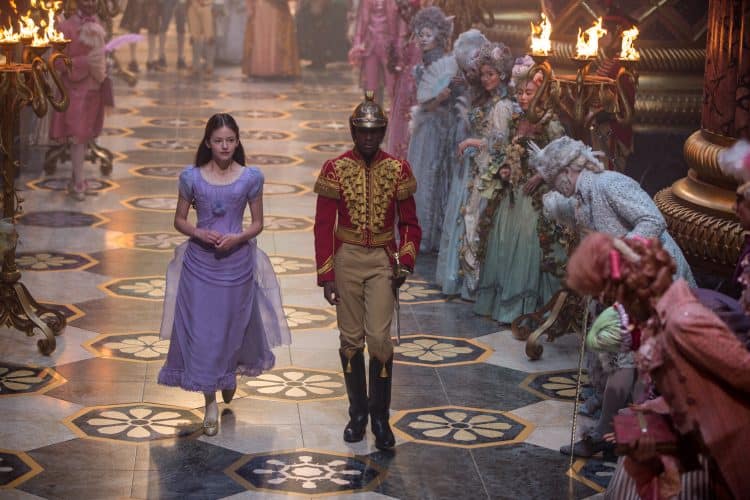 Mackenzie Foy is Clara and Jayden Fowara Knight is Phillip in Disney’s THE NUTCRACKER AND THE FOUR REALMS.

Start the holiday season the right way and buy tickets to go see the new Disney Nutcracker and the Four Realms when it comes out on Friday. You’ll feel transported and excited and ready for Christmas to be here!