You are here: Home / Entertainment / See a Movie in Dolby Cinema: It Puts You IN the Story!
Tweet
Share4
Pin
4 Shares

Last week, we were invited to Hollywood to attend a cocktail party at the Roosevelt Hotel and then screen Suicide Squad, courtesy of Dolby Cinema. Dolby really has redesigned the cinema experience, immersing us in the on-screen story, and we got to check it all out firsthand. (Who turns down a chance to see a movie in Dolby Cinema, right? Keep reading and I’ll give you more tidbits on what makes it so special.) 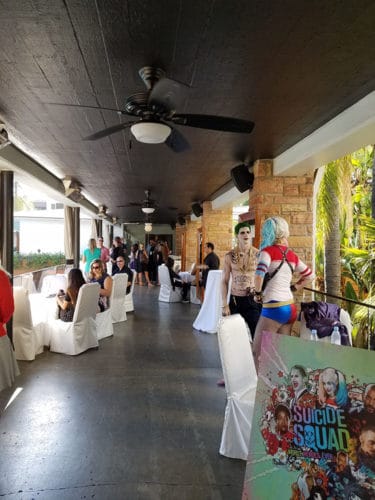 First, what an evening! The Roosevelt is a beautiful, historic setting for a party. We drank white wine overlooking people basking in the waning sun by the pool, palm trees blowing in the breeze. Gracious waiters brought us delicious appetizers like Beef Wellington, mini-quesadillas and yakatori as we talked with other media about the movie. We also had the opportunity to have our photos taken with the Joker and Harley Quinn, characters from Suicide Squad. 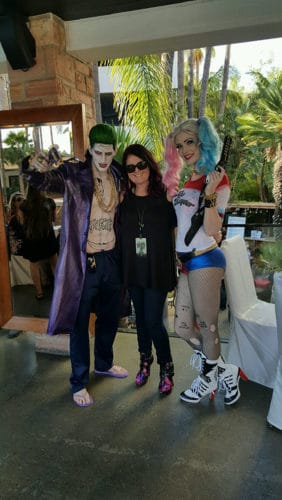 Around 6:15, we loaded onto the limo-bus for the quick drive over to the Dolby Cinema screening room. We were a fairly small crowd and there’s not a bad seat in the house anyway, so we sat dead center, second row. I knew about Dolby but was interested in learning more about what separates Dolby from seeing any other movie. First, the obvious is that the seats are different. Contoured yet big enough to be comfortable. Plush leather and angled enough so there’s no blocked view when someone sits in front of you. Plenty of room to walk between the rows. 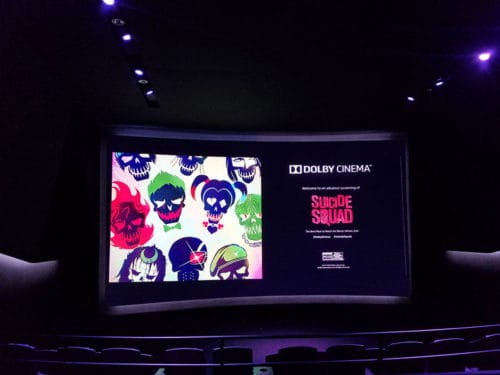 Then there’s the sound. You literally feel the noises reverberate in your chair. During certain parts of the Suicide Squad, you really feel as though you’re sitting there on the same ground as the scene. In most good theaters, the sound will come from various parts of the theater so it feels realistic. With Dolby Cinema though, it’s all around and you almost can’t differentiate its origin. It was literally everywhere, no headphones required.

Lighting was demonstrated for us. Picture a dark screen in a typical theater with a line of text in the center. The black screen around it is dark but when compared side-by-side to a Dolby Cinema set-up, the ‘dark’ of the first theater is actually grey. When the lights go down in Dolby, the theater is so dark and the screen coloring is sharp. There are no shadows that aren’t there intentionally and the clarity is something you have to see to experience. Vibrant is the best word to describe it.

The movie itself was amazing. The musical score was extremely fitting and the cast did a fantastic job of again making you want to like the villainous crew. (I’ll go so far as to say that I think Jared Leto’s Joker is the best yet.) Go see it — it’s quite an entertaining ride! 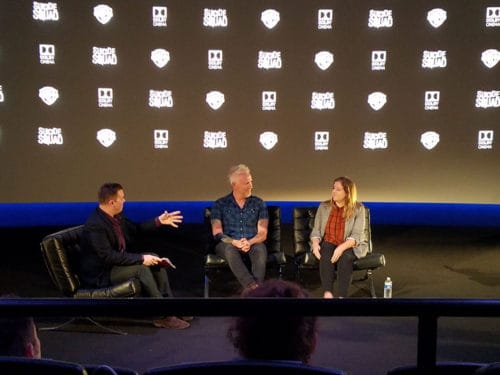 After the movie, the lead colorist Katie Jordan and the makeup artist for Croc, Christopher Allen Nelson were both available for a moderated interview hosted by The Wrap. I’d never spoken with a colorist before and it was fun learning about that aspect of film-making.

Katie explained how the goal was for a desaturated look, using Baselight, throughout the entire movie. However, as the movie went on, Harley Quinn did get more colorized and brighter. (Her makeup is part of the plot, actually — if you aren’t aware of the story line with the Joker, grab a comic before you head in, though the movie does a fantastic job of explaining it all.)

Having seen Croc in the movie, it was fascinating to learn that his makeup took around three hours per day. Each day was a new foam head that Adawale was able to rip off when he was done shooting. After a scene was filmed with Croc in the water, it was decided that there would be a lot more scenes with the Croc’s shirt off. This extended the daily makeup time to about 4.5 hours. (Daily. Can you imagine??) The directors wanted Croc to be less crocodile and more disease-y. Again, the movie will explain that a bit more.

I was impressed to learn that the movie was shot entirely in film in Canada. No one was digitized. It sounds like one thing to say it, but once you see it and all the special effects, it becomes even more amazing. Kudos to the crew to pull that off!

Take my word for it and go see a movie in Dolby Cinema. There are currently two locations in the Los Angeles area of California, with more coming. There are also other theaters available; check out the full list here. Once you see a movie in Dolby Cinema — feeling the sound, seeing the colors and just being a part of the story — you won’t want to see it any other way.