Recently, I binge watched the entire season in two days, and it really got me thinking. Here’s why I think we need more shows likeNetflix 13 Reasons. Watch it then come back and read this. Or start here, and know what to focus on when you watch. 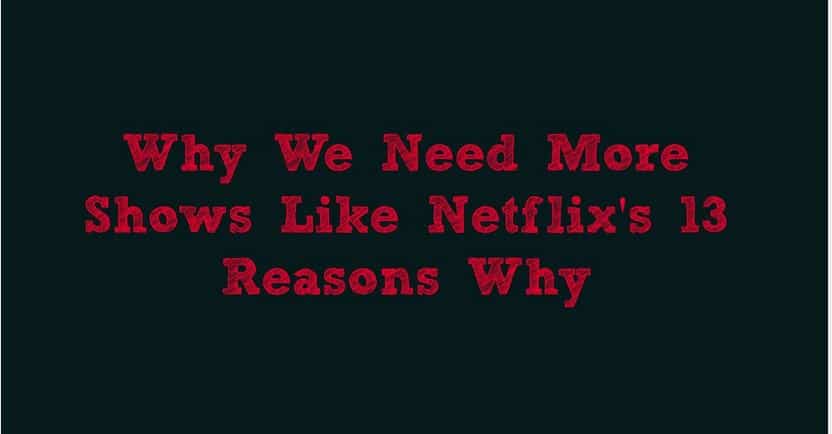 My youngest son is 16, in high school and dealing with awkward social situations all the time. Who didn’t in high school, right? So much drama. We had to dress right, talk right and act right, or we stood out as the oddballs. I was an oddball. Now I don’t care if I’m different, but back then, it was hard. Mean girls existed long before the movie came out, and they were at my high school. I get it, now..people who are insecure or feel the need to cement their place in the high school hierarchy will trash talk others to sound cool. They’ll point out your ugly sweater or your lack of makeup in an attempt to sound clever. Guys would shove other boys in the hallway to appear strong or cool in front of girls they were trying to impress. When everyone’s struggling to form an identity, they’ll often do whatever it takes to make that persona work, frequently at the expense of someone else.

But that doesn’t make it right.

I was a nerd, a straight-A student with no fashion sense and no means to get one. I wasn’t a social butterfly and certainly wasn’t an overly mature kid. This helped me in some ways, because I was under the radar, but I learned the hard way that it was sometimes necessary to fade away, to stop caring, to not try to fit in. The less obvious I was, the less I was teased. After a while, it became easy. I had low expectations and didn’t expect to get invited to dances or parties. When you don’t care, the missing invitations don’t upset you as much…or so you tell people.

Two years ago, my son was severely bullied at school. I’ve written about it on the blog before, so I won’t go into detail again, but I know he hasn’t forgotten it. As I watched Netflix 13 Reasons Why, I kept remembering things that happened to him during that phase of being bullied. I remembered the stories he shared of things kids said to him or did to him because they didn’t want to be the victim of the bully, too. I’d tried to tell him back then, let it go, those kids don’t understand, they don’t know what they’re doing, but 13 Reasons Why really hit home in a lot of ways. It made me wonder if those other kids had been let off the hook too easily, and if I’d done all the right things. Said all the right things.

Life is full of ripple effects based on our actions. If we do good, even small acts of kindness, it creates one of those ripples. We don’t always know the effects but they’re out there. Any action, however small, changes the future in some way. When kids are mean, it’s in a bad way. A kid that may be socially awkward due to a speech impediment isn’t necessarily going to run off to speech therapy to avoid the teasing; they may just decide it’s too much work and that they’ll never be good enough. The next day, they may not want to go to school. Before the parents can understand why, their child is dealing with serious anxiety and doesn’t want to go to school anymore at all. Health issues may arise. It can continue to snowball, and we hope it doesn’t end up like Hannah, but if you watch the news, you know kids are committing suicide at an astounding rate due to bullying.

It has to stop.

If you saw Netflix 13 Reasons Why, you know what I mean. We never know when our actions are the last straw for someone. We don’t know if our lack of honesty or our act of spite is what will push them over the edge. Conversely, we don’t know when our hug or “How are you?” are the thing that pulls someone out of a downward spiral. We don’t know when something we’ve done has just saved a life.

Wise words from Clay, an insightful young man who is just his own person and seemingly okay with it. He’s got problems and issues to deal with, one being an overbearing mom, but he’s a good kid trying to get through a series of situations that are too big for high schoolers…yet they’re not, because it’s a vicious cycle of things. Kids make mistakes and then repercussions are like a lit fuse that they can’t put out. Bullying, lies, rumors, rape, they’re all there, every single day. We may not be able to stop them entirely, but we need to try and give our kids coping mechanisms. We need to talk with them about bullying and mean kids and even things like adding someone’s name to a ‘harmless’ list. Even the little things really aren’t so little.

We need to talk to them before the problems get out of hand. We need to let them know that making a mistake isn’t the end of the world. We need to make sure they know that they can talk to us, that our expectations for them aren’t so high that they already feel insufficient. We need to help them relieve some of the pressures and we need to remember what it was like to be that age. Even if our high school age wasn’t full of angst, or if we were okay with being the oddball…mostly…life is different now with the addition of social media to an already difficult age. Things don’t happen in a vacuum now, they’re out there for the world to see.

We need to do a lot of things that go beyond just loving our kids. We can’t make excuses, or say we’re too busy or ‘not my kid.’ They’re all our kids because we don’t live in a vacuum either. We have to take action, uncomfortable or not.

There’s talk out there that 13 Reasons Why was too brutal, too dark. They’re right, it was brutal and it was dark, but would it have made an impact on any of us if it hadn’t been? Would we be talking about it? Would we be asking our teens to watch it or discussing any of it?

More importantly, would we be looking a little more deeply at the things our kids tell us and opening our eyes enough?

Maybe it had to happen in order for us to realize that this isn’t a situation easily ignored. We can’t hope bullying, rape and suicide away. We have to listen to the things people tell us. We need to really listen.

If it takes a tv show on Netflix to inspire that, then good. We need more shows like 13 Reasons Why that don’t just glue us to the couch or entertain us, but shows that make us think. Shows that make an impact. Shows that makes us want to hug people more and complain less. Shows that inspire us to be an activist on our own playing fields. Then maybe later, we’ll be an activist or inspire our kids to be one on a large scale. It has to start somewhere.

Our kids are getting slowly desensitized to the violence in the world, because they’re surrounded by video games that glorify killing, music full of profanity and news broadcasts with more deaths, in our own cities, countries and abroad. We can’t let that happen. We need to show them the benefits of being kind to one another, starting with baby steps. Plant the seeds of compassion and help them grow. Inspire them to walk up to the oddball in the hallway and ask her how she’s doing. Ripple effects, effects that may just soften the places that have been hardened by the bullies, the mean girls, and others who may have somehow hurt them.